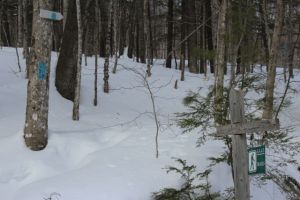 Mondays are our date day and our best dates are treks in the woods. And so this morning, despite temps in the single digits and a brisk wind, we headed off–to Horseshoe Pond Road in Lovell. 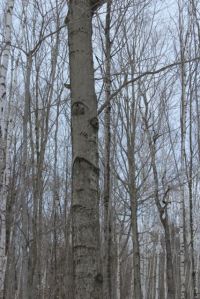 I’m fascinated by bear sign and love to find claw marks on beech trees. Oh, they climb other trees, but beech show off the scars with dignity for years to come. While bark on most trees changes as it ages, beech bark is known for retaining the same characteristics throughout its life. 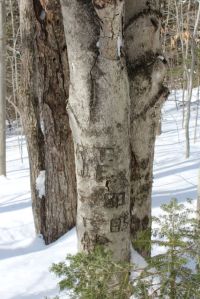 That’s why bears, oops, I mean people, carve initials into the bark of beech trees. So, these initials appear to have been carved in 1980 and 1985. 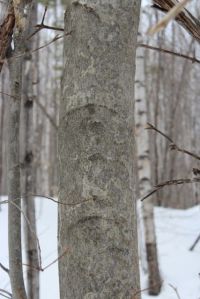 On a healthy American Beech, the bark is gray and smooth. Some describe it as resembling elephant skin. I don’t know about that–I’ve never actually touched an elephant and think that if I did, I might find it rather wrinkly. If you look closely at this photo, you can see some lighter curvy lines–apparently those are slug trails–again, I’ve never actually paid attention and seen a slug eating algae on a beech tree, but rest assured that I’ll be looking for such action in the future. 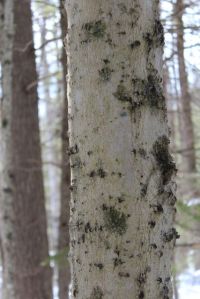 I can’t talk about beech trees and not mention beech bark disease. Some beech trees don’t look at all like the smooth-skinned trees we know they should be. Instead, they are covered with pock marks. In the late 1800s, beech scale, a tiny insect, made its way to the US via wooden pallets. As the insect penetrates the bark to feed on sap, it inoculates it with a fungus. The tree reacts by creating a canker around the fungus. Typically, this doesn’t do the trick and the fungus spreads, causing the tree to look like it has a bad case of chicken pox. And . . . other infections use these openings in the bark to enter the tree. Then come the carpenter ants, followed by the pileated woodpeckers and soon, all you have left is a beech snag as the top snaps off the weakened trunk. 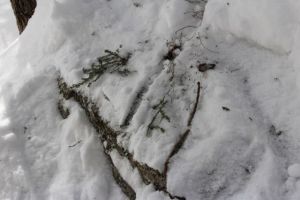 So on to other things–lunch rock. We decide to pause in a hemlock grove to eat our peanut butter and jam sandwiches and drink some hot cocoa–my guy gets away with cheap lunch dates. Clearing the rock, we discovered that others had eaten here before us. Porcupine evidence. 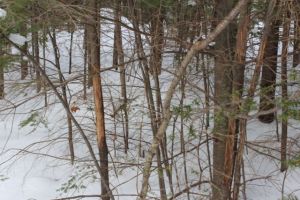 Deer browse on some hemlocks directly behind the rock. 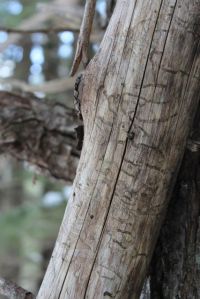 Trails of beetle borers on a widow maker dangling from a hemlock. 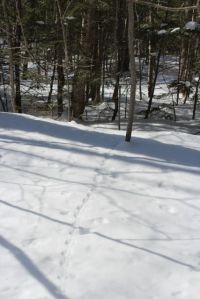 A white-footed or deer mouse that took a chance last night and roamed for quite a long distance–risky business for such a little brown thing. 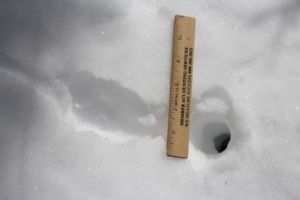 Nearby was this hole and set of tracks created by a weasel. Several years ago, a friend and I watched a weasel chase a squirrel up a tree on this very trail. 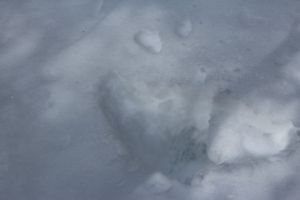 As we continued along today, a ruffed grouse exploded from its snow roost. I wish I’d been quicker with the camera and had actually photographed the bird. But . . . if you’ve ever been startled by a grouse, then you know it’s an unexpected experience. I’ll have to save that one in my mind’s eye. 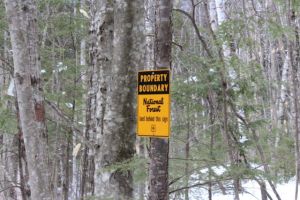 We trekked on land protected by the Greater Lovell Land Trust and then crossed over into the National Forest. Seeing all the animal tracks and sign, some decipherable, others not so, makes me thankful for those who have worked hard to preserve this land and create corridors for the animals to move through. 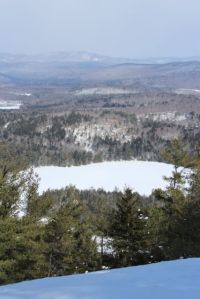 At last–we arrived at the ledges overlooking Horseshoe Pond. You can almost see the horseshoe shape of the snow-covered pond. 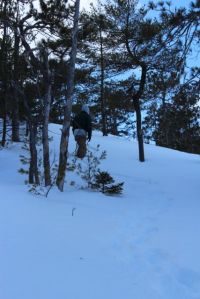 Cutting the trail wasn’t always easy. Especially heading up the ledges. It was slick underneath, and a couple of times I felt like a gust of wind was going to pick me up and carry me off. OK, so it wasn’t that bad and I’m not that light. But it was windy and I did have to tuck my body at least twice. 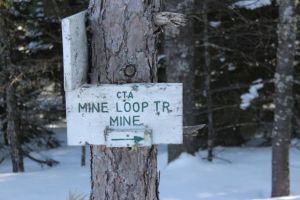 On to the mine. 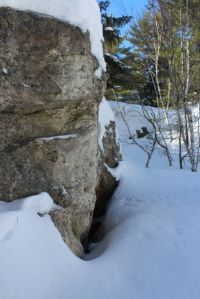 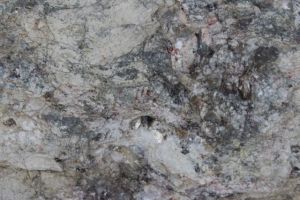 In her book, Hikes & Woodland Walks in and around Maine’s Lakes Region, my friend, Marita Wiser, writes the following: “Lord Hill has been known to mineral collectors for more than a century. Some of North America’s finest specimens of white topaz have been found here . . . Hundreds of tons of feldspar were mined here beginning in 1947. It was while mining for feldspar in 1965 that the largest pocket of minerals ever found here was discovered.” Marita goes on to mention smoky quartz and blue apatite. And she adds, “Reportedly, mica mined here was used commercially in lamps and as resistors in early radios and TV sets.” One of these days, maybe I’ll strike it rich.

In the meantime, thanks for wondering along with me on today’s tramp.