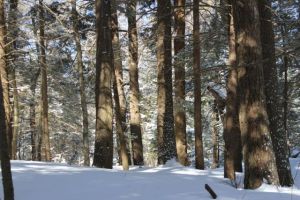 It’s not every day that I get to wander and wonder among 300-year-old giants, but such was the case today. A friend and I met at Robinson Woods in Cape Elizabeth. It was a reconnaissance mission for me as I’ll be leading a senior college class there next month. And for both of us, it was a delightful way to spend three hours snowshoeing on and off the trail, with frequent pauses to look, listen, touch, smell and learn.

Because the land was not suitable for farming (terrain rocky and uneven), it was left unchanged for all these years. Actually, we met the executive director of the Cape Elizabeth Land Trust along the way, and he told us that the Robinson family was a paper company family, but they left this piece untouched. Thanks go to them. And to the land trust for preserving the land so that it will remain in its natural state.

We could hear the birds sing and call as we moved along. Someone apparently wanted to make sure they have enough to eat as we found a couple of these “bird-seed” pine cones dangling from trees. (Separate note: back at home, for the second day in a row, I’ve had chickadees landing on my mitten to eat crushed peanuts–well, they don’t actually eat them on my hand, they just grab and fly to a nearby branch, where they use their feet to hold the nut or seed and then peck away at it.)

We followed this porcupine trail for a bit. As we backtracked our way toward the people trail, something caught our attention: 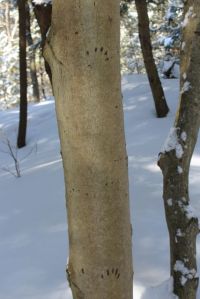 Yes, even in Cape Elizabeth, and only steps from the ocean, you can find bear claw sign on beech trees.

We showed these photos to the executive director of CELT–he had no idea they were there. I’ll be curious to see if he adds black bears to the list of mammals that frequent the property. I did see that they have pine martens on the list–that surprises me.

I know I’ve spent a lot of time writing about beech trees, but this one looks like a totem pole of gnarly faces. Think gargoyles. Was the beech scale disease initially responsible for this? I wonder. 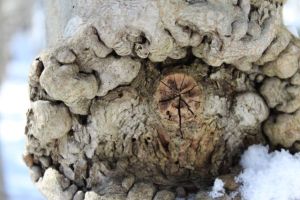 Very gnarly indeed. In the center, you can see where a branch broke off.

This Red Maple had some serious burls. Perhaps they were caused by stress or injury, though researchers don’t know for sure why they occur. Despite the bumpy, warty growths, the tree appears to be healthy. You can see that there is new growth–young red branches sprouting from the burls. Removing a burl causes a large wound that could eventually harm the tree, so they’re best left alone–though I know woodworkers covet them.

We were almost back to our trucks when we came across this tree. It’s a young tree and we tried to key it out. We’re pretty sure it’s Shagbark Hickory, but if you know otherwise, please enlighten me.

Thanks for wondering along with me on today’s wander through the woods.

2 thoughts on “Wondering Among Giants”