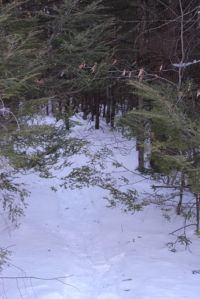 Hemlocks and beech trees create the gateway to my special place where few others wander and wonder. I’ve intentionally left these trees as is at the edge of the snowmobile trail so I can pass through and disappear into my own world. It never ceases to amaze me that I suddenly feel alive as I step into this section of the woods.

I spent this morning at the Maine Milfoil Summit and thought it was one of the best I’ve ever attended. And then a friend and I enjoyed lunch at Fishbones in Lewiston before I drove back to western Maine and she returned to her home closer to the coast. All in all, it was a wonderful day, but the moment I stepped through those tree branches, I was home. I was in my smiling place. It’s a feeling that I don’t think I can put into words. Some things are best left unsaid.

Part of the woods that I explored today had been logged about ten years ago. The openings created a nursery for hemlocks, pines, fir and spruce to spring up. Who will be the winner in the end? It’ll be a while before I know the answer to that one. 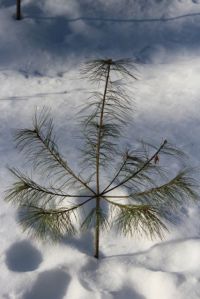 Eastern White Pine trees win the prize when it comes to the kitchen growth chart, which, by the way, I finally painted over in our kitchen this winter and no one seems to have noticed. Each year, a white pine produces a whirl like the one you see here. A whirl is a group of branches that radiate out from the tree’s trunk. 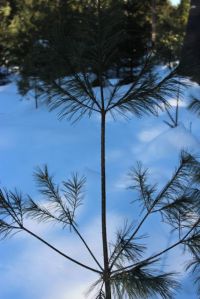 So, our boys never had a growth spurt quite like this one–thank goodness. I should have measured it, but this white pine grew about two feet in one year as evidenced by the distance between one whirl and the next. Why? Because it’s in an area where most of the canopy or taller trees that would have blocked the sun and prohibited its growth, were taken down. Ample sunlight will do that to you. 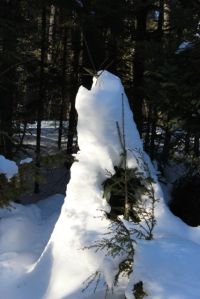 Snow ghosts! Even my computer suggested there was a person hiding under this snow costume–it wanted me to provide a name. Was someone in there? What would you name it? 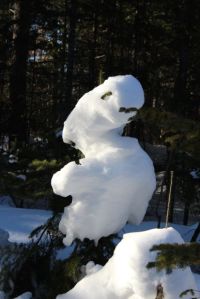 And a snow creature. Snowzilla?

The snow is quite deep, but the deer are moving about more and more. I found numerous deer runs like this one today–trails that they use over and over again. Sometimes other mammals follow them as well.

And sometimes the deer follow in my tracks as is the case here. The prints to the left indicate that a deer was traveling toward you as you read this. And the print to the right indicates that another was traveling in the opposite direction. 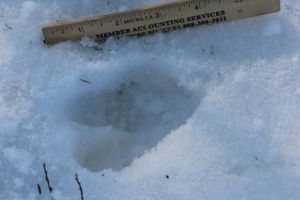 Deer prints are heart shaped. The point leads to the direction of travel.

I’m always thrilled when I find deer beds. These two were quite large. And filled with scat–all I can say is, scat happens! The curious thing to note about deer beds is that when two or three are gathered, they tend to sleep with their backs to each other so they can keep an eye out for predators.

You can see where this deer pawed at the snow to get comfy for the night. Oh yeah, and more scat 🙂 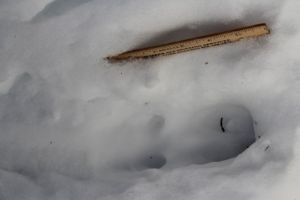 So some say that when you see the dew claws in a deer print, those two small toes above the foot that look like two dots at the back, you have a buck. Maybe. Or maybe the snow is soft and deep and more shows in the impression.

I was thrilled to find this young oak tree, one of the few that has grown in this area since the logging event. I don’t know if you can see from this photo, but there are frayed ends along the branches. I’d never noticed this until about a month ago when exploring a property in Lovell, where it seemed that every oak tree surrounding a field displayed these frayed ends. That field was near a porcupine condominium, so my first thought was porcupine activity. But there were no tracks to the trees. Then I thought of squirrels. But again–no tracks.

It wasn’t until recently that a friend who is a retired forester showed me it was a wind event that caused this. Like beech trees, oak leaves are marsescent. During wind events, and we’ve had plenty of those this winter, the leaf may get ripped from the tree–leaving a frayed stem or petiole. It makes perfect sense now. And the tree I found today, which displayed this phenomenon, is in the open, leaving it vulnerable. 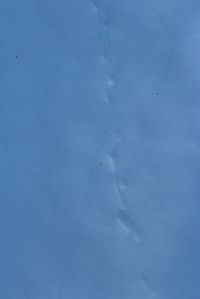 I was almost home when I discovered these tracks. Notice that they are a bit erratic.

Not a big mammal. 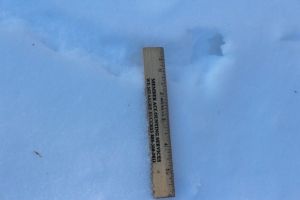 And leads to a small hole. A vole hole! I was excited because I found this in the same area where I found vole tracks last year. Voles are highly delectable treats for some predators. Ah, the food web.

And then I was back at the snowmobile trail and this traveler never saw me. Yup, I like it that way. Rather like the mammals that I know are out there. I can’t see them, but I have to assume they know I’m about and watch me from their hidden spots. Maybe they share a smile with me.

I can only wonder as I wander. Thanks for joining me.

5 thoughts on “My Smiling Place”