I’m not the only one to cross boundary lines. You can see a deer run passing between the trees.

Acres and acres of land behind us are maintained under the Maine Tree Growth Tax Law that was enacted in 1972. This law allows landowners to create a productive woodland, while supporting the wood products industry. They must develop a management plan, which includes periodic harvests. For the last two years, a lone logger has been harvesting trees on much of the land which is owned by one person. While I complain about some timber projects, this one seems to be well executed. And the deer love the opportunity to find lots of browse as a result.

Red Maples that have been cut will stump sprout, thus providing lots of munching opportunities.

They don’t all get consumed in one day, fortunately. These Red Maple buds are beginning to swell. If the deer don’t eat them, it will be fun to watch the transition over the next two or three months. 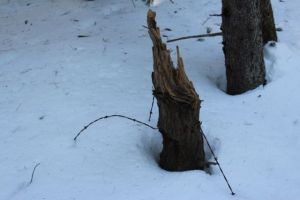 While poking about looking at this, that, and the other thing, I found more evidence that this land once had an agricultural use before reverting back to forest. Barbed wire served as a boundary beginning in the late 1800s.

In parts of the woodland, the evergreens are now the most abundant trees. The needles on the balsam firs caught my eye today. Normally, they lay rather flat, but suddenly I noticed that some were standing upright, showing off the two white lines or stomata on their undersides. 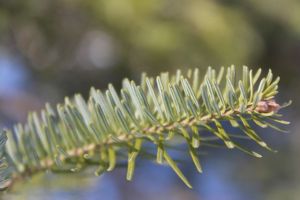 Typically, balsam fir has dark green needles that are blunt-ended and about an inch long. Some of the ends feature a small divot or notch. The silvery whitish lines on the lower surface are the stomata (pores). In today’s sunlight, the needles had a bluish hue as they stood up. What’s up? Why are they standing on end? 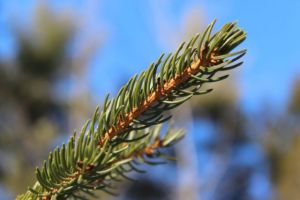 Spruce, on the other hand, have shorter needles with pointed ends. They feel prickly to the touch. Everything seemed normal with them.

And then there’s the ever dainty hemlock with its half-inch long needles. Guess what? It also has two lines of stomata on its underside. So . . . don’t let that be the defining factor when you are trying to figure out what tree you’re looking at. Notice how the needles are attached, their length, their feel and the overall look (GISS) of the tree. Oh, there’s more, but save it for another day.

I was excited to find this Sugar Maple. The bark on a Sugar Maple tends to twist as you look up the tree. At least to my eyes.

And when I walked around, I found evidence of the sugar maple borer–the line that is left looks like a frowning mouth. I know I’d certainly frown if something named a borer attacked me.

Whenever I see a fresh pile of wood chips created by a pileated woodpecker. I have to investigate.

And I wasn’t disappointed. Pileated woodpecker scat! 🙂 It’s filled with insect exoskeletons, since that’s why the woodpecker excavates the tree.  A few weeks ago I spent some time at Holt Pond Preserve in South Bridgton with a fourth grader who was working on a school project. We found some of this scat. She wasn’t particularly impressed but took it to school anyway. I hope she wowed her teacher and classmates. This morning, I met with a GLLT docent and the first thing I did was pull out my scat collection. After she guessed at each one, which I keep in separate petri dishes, she looked at me, grinned and said, “I don’t think anyone has ever shown me their scat collection before.” What can I say. My social skills are . . .

I’ll end with this photo. Life happened here. A deer bedded down under a hemlock tree. And sometime later, a red squirrel climbed the tree while holding an Eastern White Pine cone, which it proceeded to strip in order to eat the two little pine nuts at the base of each scale on the cone. And you thought I was showing you more scat, I bet.

Thanks for joining me today on this wonderful wander.