Today’s tramp found us heading north on Moose Pond again. The pond is covered in snowmobile tracks and snow swirls like these.

Though we sink into the snow, this coyote had no problem moving along. 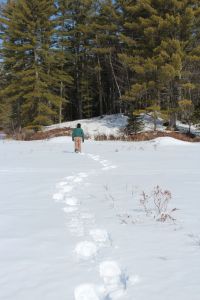 Snowshoes were a must for both of us. Our intended destination was Rueben Bennett’s saw mill–or at least the remnants of it. I’d been there about a year and a half ago with the current land owner and another friend, and wanted to show my guy. A couple of men who lived in the Old City neighborhood I wrote about yesterday, may have worked at the mill. 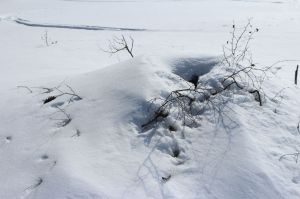 We were almost to the outlet of the brook when we saw that this beaver lodge is active. Notice the breathing hole at the top. We moved away quickly so as not to add any more stress to them.

It looks like the fluffy seeds of these cattails are still emerging. It won’t be long before the Red-winged Blackbirds are perching on them.

Following the stream, we kept looking for the rocks left from the mill site.

Along the way, I spotted this lungwort or lung lichen. It’s one of my favorites because when it’s dry like this, it’s light in color and very brittle. But after a rain storm, it turns bright green and is quite pliable. And it’s got that lettuce leafy look to it. Some describe it as a lung tissue appearance. I’ll stick with the lettuce, thank you very much. Lungwort is an indicator species for a rich, healthy ecosystem. Always a good find. 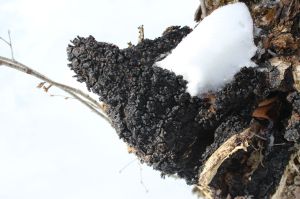 I’m not a mushroom expert, but I do know that this is Chaga. Another good find.  Unlike most other  hard, woody fungi, Chaga is coveted for its nutritional and medicinal benefits. If you want to know where this one is, you’ll have to follow our breadcrumb trail. I recently learned that the Siberians call it the “Gift from God” and the “Mushroom of Immortality.” To the Japanese, it is “The Diamond of the Forest,” and for the Chinese, “The King of Plants.” A mighty good find. It’s still there.

We looked high and low for the mill site. At last we came to this Red Maple swamp and decided that perhaps it was Duck Pond, and we’d gone too far.

Old City is located right up the hill. I was almost certain we were in the right place, but our search turned up nothing. 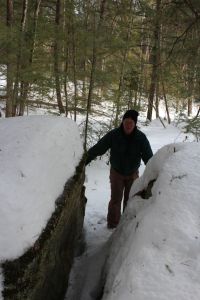 After three hours of tramping about, we started for home. The wind was cool at our backs, but someone took of his snowshoes and you can see that it’s getting a bit slushy on the pond.

What’s that line about walk beside me and be my friend. I know it looks like I’m always following, but that’s not the case all the time. I do like to pause frequently and take photos to remember and ponder at a later time.

It turns out that we were milling about in the wrong area. I should have looked at my friend’s Web site prior to today’s adventure. She almost always has her GPS handy and had posted the exact location. I knew it didn’t feel quite right, but I was so certain it was closer to Old City than it actually is.

Oh well. A destination for another time.

Thanks for joining me for today’s wonder-filled discoveries.

3 thoughts on “Milling About”