One of our favorite places in town is a hidden gem–Holt Pond Preserve. We parked at the corner of Chaplin’s Mill and Grist Mill Roads, grabbed our snowshoes and backpack from the truck and walked on snowmobile tracks across the field to begin today’s Mondate.

At the field’s edge, we passed under the hemlocks, beeches and oaks and into the wild and delicate beauty that the preserve offers.

The midmorning light added subtle hints of aqua and pink as the water danced around an ice-capped rock in the brook. 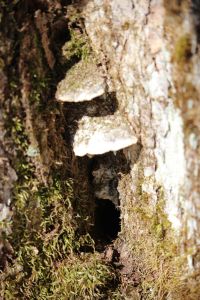 We saw lots of tracks from the mustelid family, as well as snowshoe hare, fox, squirrels, mice and voles. Also, turkeys and grouse. I’m not sure what made the hole and dirt trail beneath the mossy maple mushrooms near the base of this Red Maple. I would not have seen it if I hadn’t leaned in closer to take a photo. I do happen to know that gnomes frequent the area, so just maybe . . .

We continued on, crossing Tingley Brook and then making our way beside Muddy River, where the Lakes Environmental Association (LEA) leaves these canoes for anyone to use. Bring your own personal floatation device, paddles, and duct tape. I know where you can purchase duct tape, should you need more. 🙂

Near the canoes–a lone beaked hazelnut. Inside this bristly tan husk is an edible nut. Doesn’t it look like a gourd? The name derives from that tube-like protruding beak. I couldn’t believe it was still there as the protein-rich nuts are favorites for red squirrels and chipmunks, as well as ruffed grouse, woodpeckers and blue jays. Humans too.

We never actually wore our snowshoes today. I hauled mine around on my pole, while my guy stuck his between his jacket and sweatshirt. He said he didn’t need his back scratched for the entire trip.

Looking toward Holt Pond from the boardwalk by the Muddy River.

There was only a slight breeze, so the low temp was modified by the brilliant sunshine. Another beautiful day in Maine. 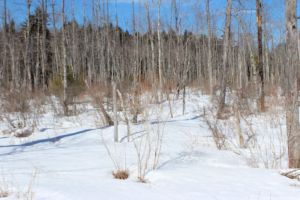 I think one of my favorite features about the preserve is that the habitat keeps changing–from hemlock groves to red maple swamps to alder thickets to a quaking bog. 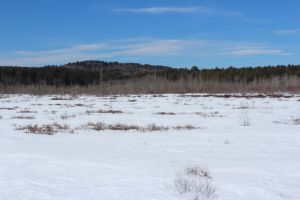 Though you can’t tell in the winter, the quaking bog is a thick mat of vegetation that formed over the surface near the edge of the pond. A board walk passes across it and one of the fun things to do with a group of people is to have everyone jump at the same time and watch the bog quake. This is also a great spot to visit alone–for quiet reflection. 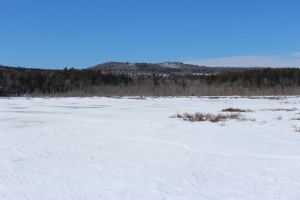 Views at the pond’s edge–north and south

We stopped at a rock in a sunny spot along the South Shore Trail to enjoy lunch al fresco. PB&J never tasted so good. Topped off with ice cold water and some Ghirardelli chocolates. 🙂 As we continued along, we paused to look back across the pond toward the Quaking Bog.

Sometimes we chatted and other times we were each lost in our own thoughts and moving at our individual paces. Similar to my NDD (Nature Distraction Disorder), my guy has his own syndrome–Destinationitis. But, he’s learned to compensate by pausing until I catch up . . . and then he’s off again. That’s OK–it gives me time to spend in my own world. 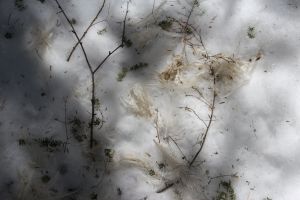 At the edge of a field (we know it as “The Field” because it’s the end of a section of trail that we keep maintained for LEA), we both stopped to look and wonder. Under a hemlock tree and in the middle of the trail, we found these white feathers. Don’t you just love a mystery? 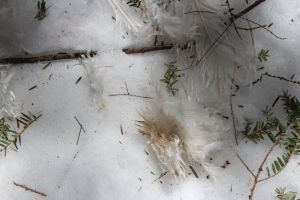 Here’s another look. Some had sheer cuts; others looked plucked. No great place to hang out above. If you know what bird this was or what happened here, please enlighten me.

At least five miles later, we were back on Chaplin’s Mill Road headed toward the truck.

Thanks for stopping by again to wonder my way. I hope you enjoyed the three hour tour.

6 thoughts on “Our Three Hour Tour”