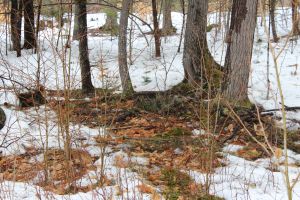 Off on a care-free holiday in . . . Lovell, Maine. What sets it apart is the variety of islands. And, I suppose, the ferry service between each.

A naturalist friend and I set off on our grand adventure at the John A. Segur Wildlife Refuge this morning. This is a 598-acre refuge owned and cared for by the Greater Lovell Land Trust. We hopped, more like sloshed on snowshoes, from one island to another as we discovered the highlights of each. 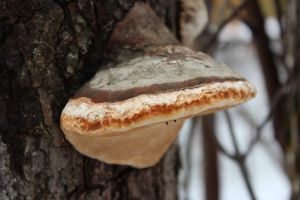 Like on any island hopping experience, we were quite taken with the breathtaking diversity of vibrant colors and textures. This is a red-belted polypore (if I’m right), Fomitopsis pinicola. I have another friend who is determined that I will learn my fungi, so I hope he’ll read this and correct me as I go along. He knows only the Latin names. I’m lucky if I can remember a common name. (Don’t tell Mr. Cretella, my high school Latin teacher.)

Turkey Tails (Trametes versicolor) were hanging out, doing their thing on some dead wood. 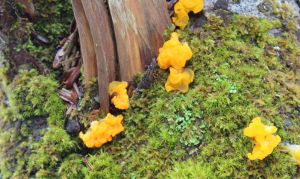 More than once we were greeted by Witch’s Butter (Tremella mesenteric). I love butter, so this must be the good witch. (My PB&J sandwiches always include slabs of butter)

No island tour is complete without seashells. In this case, I think this is a Birch Polypore (Piptoporus betulinus) growing on the Yellow Birch. I’m thrown off by that wavy rim. Whatever it is, it’s beautiful. 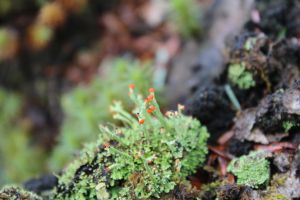 We didn’t just hang out with a bunch of fungi. British soldiers (Cladonia cristatella) were standing around, proudly inviting us to take a look at their red caps.

Yes, we took a liken to some other lichens as well. I believe this is Pimpled Kidney Lichen (Nephroma resupinatum). 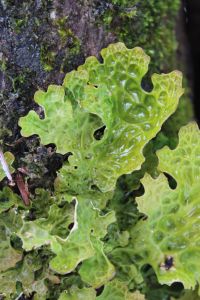 Being in the islands, we are on the cusp of the rainy season and the Lungwort (Lobaria pulmonary), was saturated and bright green. We had hoped we’d see it on this tour, and it didn’t lettuce down.

Are you still with me? There were so many more sights to see, including the Green Pyxie Cups, aka Mealy Pyxie Cups (Cladonia chlorophaea). 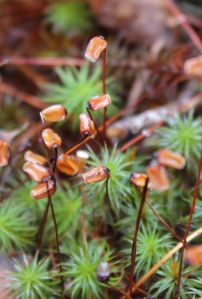 No matter where we looked, either on the islands or on the sea of snow between each, we found evidence that the deer had visited before us. Tracks, scat and beds everywhere. And then we found this. A bone fragment that had been nibbled on. Maybe a piece of an antler?

And this. Lots of deer hair beside the plug of hair above. What happened here? We didn’t have a guide to ask, but the story unfolded before our eyes. A deer sat down to spend the night under the hemlock tree. Its body heat turned the snow to ice. And when it stood up the next morning, the hair stuck to the ice. Anyway, that’s our story and we’re sticking with it.

If you’ve stuck with me through these wonder-filled wanders, then you know that I may include a photo of scat. In this case, an island native made itself known by the debris on top of the island and snow–porcupine.

A few minutes later we came upon its den. Porcupines are the pig pens of the natural world. Despite that, we were excited to find this.

No need, however,  to stick around there. We bounded (hardly) off to another island, glad that we were able to stop at so many destinations in a single day. And the best part is that when we visit again, we’ll find other treasured spots to explore.

Thanks for stopping by to wander and wonder.

P.S. And take a look at my friend’s site–her photos are amazing and the map of our walk shows just how nature distracted we are.