I’ve been blessed with amazing opportunities. From writing and editing projects to nature education, I get to meet and learn from a variety of people. Yesterday, I spent two hours with a couple who live off-the-grid on a farm in Stow and rent greenhouse and farm stand space in Lovell. Though we’d met only briefly at an owl presentation this winter, I immediately felt like I was among old friends. My task today was to turn our interview into an article.

Writing is a process that I embrace. I work best when the house is quiet. Then it’s pen or pencil to paper, letting the story flow from head and heart to hand.

Once the rough draft is completed and I’ve typed it, I’ll read it aloud and make some changes. But then I need to step away. And that’s what I did this afternoon.

I didn’t go far. I felt the need to wander along the edge of the power/tree line, where the snow is melting.

The color red pulled me in for a closer look. Seems funny that blueberry twigs are red, but then again, I’ve never seen a blue twig . . . and never hope to see one. 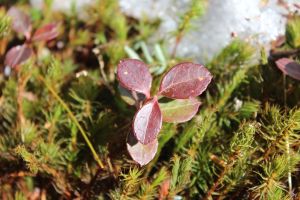 Still reddish maroon Teaberry or Wintergreen leaves. On summer walks, it’s refreshing to pick a leaf and breath in the wintergreen scent. Though the leaf shouldn’t be swallowed, some like to chew it for the flavor. Or make tea from it.

I can’t resist the Red Maples. In less than a month they should be flowering.

After walking along, sinking frequently in the still knee deep snow, I finally settled down. The sun was warm on my back. Every so often a gentle breeze made the hemlock boughs sway daintily above my head as dried leaves rattled on a nearby beech.

Hemlock leaves or needles are each attached to the twig by a hairy stem called a petiole. The needles on a Balsam Fir attach directly to the twig. I love the subtle differences between the two.

I love taking the time to sit and pay attention. To be. On the edge.