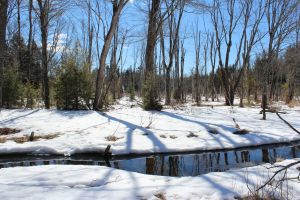 The Greater Lovell Land Trust’s Tuesday Tracking group returned to the wetland at the John A. Segur Wildlife Refuge today. It’s one of those places that I could spend hours upon hours exploring and still only see a smidgeon of what is there. I’m overwhelmed when I walk into a store filled with stuff, but completely at home in a place like this where life and death happen and the “merchandise” changes daily. 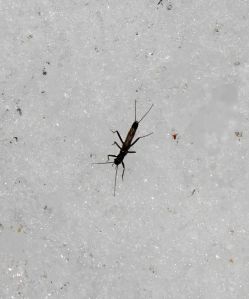 Walking across the snow was this small insect. So . . . we were in a wetland. Tomorrow will be April 1–no kidding. The insect is about an inch long. It has long antennae and a pair of cerci or appendages at the posterior end of its abdomen. I’d say we found a common stonefly nymph. Please correct me if I’m wrong. 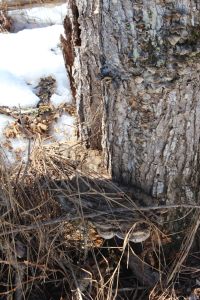 On first glimpse, this may look like a pile of dried grasses and twigs.

There’s evidence of beaver work throughout the sanctuary, but none of it is recent. So . . . my friend decided to play Queen of the Lodge.

We crossed Boulder Brook via an old beaver dam–one-by-one in the name of caution. 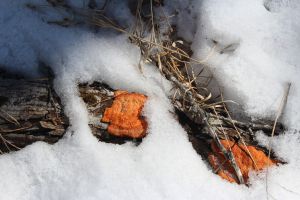 Color draws us in for closer inspection. I’m betting on Cinnabar-red Polypore (Pycnoporus cinnabarinus) as this one’s ID. If I learn otherwise, I’ll let you know.

Remember this lungwort I shared last week in my Island Hopping blog?

Then there was the mysterious event.

Very fine tags dangle from the upper edge of the scraped bark. Not the work of a deer, beaver or porcupine. Not a hare or little brown thing. Maybe a bird? No holes, just the fine layer of outer bark delicately scraped off.

Here’s a deer scrape as a contrast.

For this next wonder, you’ll have to look closely inside the hollow yellow birch. Peer to the left of the hole toward the rear. Think vertical. 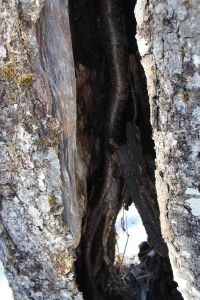 Do you see it? It’s in the center of this photo.

And here it is further up in the hollowed out tree. A tree within a tree. Another yellow birch or birch root growing up through the center of this dead snag. Life and death. Together. One within the other.

This guy was dashing across the snow, but had the decency to pose for a photo op. Given that he wasn’t wearing boots, I don’t blame him for running along.

And suddenly, we realized we’d spent over three hours exploring and it was time to head back over the beaver dam.

On the trail again, we paused to admire spring growth on a small white pine–a mini candelabra.

Thanks for wandering along and wondering my way.