It rained last night and this morning, but we never did get the snow that was mentioned in a few forecasts. And the sun came out so I wandered down the cowpath, headed for the snowmobile trail. Instead of walking toward Mount Washington, I turned left.

At the vernal pool, I was excited to see the slush. And I was sad to see that it’s been disturbed–rather recently. Not by wildlife either. It’s such a fragile environment.

On my way to look at the nearby well, I realized that some land about ten feet from the pool had been carved out. It’s not a root cellar or foundation. Perhaps the site of a farm shed. It appears to be three-sided, maybe the fourth side being an opening.

And another ten feet away, the well. I didn’t realize last month that there’s a large stone cap over it.

The well has the signature of a Colonial stone cutter–the drill mark left from a feather and wedge routine to split stone. Granite is a hard, coarse-grained rock that consists of minerals  including quartz and feldspar. Interlocked like the pieces of a jigsaw puzzle, the minerals make it one of the strongest and most durable rocks.

During the 19th century, stone cutters used the plug and feather method to hand drill small holes every six or seven inches across the stone. Then, two shims, called feathers, were placed in a hole and a wedge, or plug, was hammered between them. Drilling took place during the winter months when ice would form in the holes and help complete the work of splitting the granite.

I continued along the trail, letting it share its moments of wonder. Suddenly, a sparkle of white light caught my attention.

Pussy Willows in all their glory. I love how one branch reflects the other, don’t you?

And then this–a colony of British Soldier. This one is for my friend, Em. 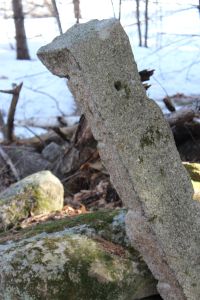 All along the trail there are stone walls and occasionally other boundary markers like this one. Notice that it also has the feather and wedge signature of a stone cutter. 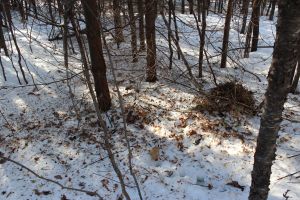 Then I saw this disturbance just off the trail. I needed to take a closer look so it didn’t matter that the snow was over my boots.

Maybe a toppled red squirrel drey? If it is a squirrel drey, why is it down? Something isn’t quite right here.

Because we live in a very wet area–oh heck, all of Maine is wet–I don’t always walk this trail during the spring months. But . . . today I ventured off trail and took a closer look at another vernal pool located about a half mile from our house. It invites further exploration as the season evolves.

One of my favorite trees beckoned to me. Um . . . that could be any tree in the forest. But this one is super cool. It looks almost oak-like on the lower portion and birch-like above. It’s an aspen. Big-toothed or Quaking is always the question. I spent some time exploring the woods with a couple of foresters last fall to hone my bark identification skills. I asked them how to tell the difference between the two. One admitted that he didn’t know and the other was sure he knew until I showed him a leaf on the ground that contradicted what he thought. My quest is to figure out the answer to this.

The lower bark is worth observing . . . and touching. While Northern Red Oak bark has fairly smooth ridges, aspen, or poplars as they are also known ’round these parts, has gnarly bark. 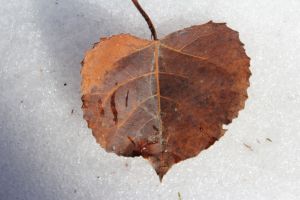 And then there are the leaves. Big Toothed Aspen. 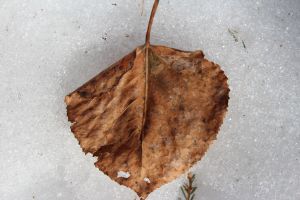 Quaking Aspen. Yup, I found both of them below this tree.

Then there are the stems. Aspens leaves feature flat stems–giving them that ability to quake or tremble in a breeze.

I continued along the trail, which was sometimes covered in snow and other times ice, slush, grass or mud.

About a mile and a half later I reached signs of today’s civilization, though I’d seen plenty of signs along the way indicating yesteryear’s activity. A main road was in front of me. I could walk home via that route or turn around and follow the trail back. I chose the latter. 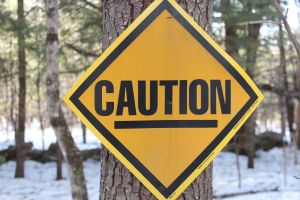 Signs tell it all.

Sometimes they told me to turn this way.

Other times they indicated that I should turn that way. 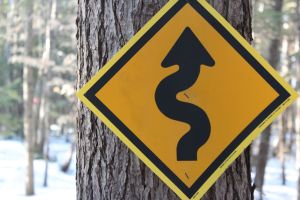 But my favorites are those that let me know the route I follow isn’t always straight ahead.

And then I was almost home. Tomorrow is Easter–the joy of wonder.

7 thoughts on “The Joy of Wonder”