Sometimes Christmas gifts are delayed at our house, though not quite the way they were when I was growing up. Back then, months after the holiday, Mom would discover a forgotten gift she’d tucked away in the hallway closet for one of us. It was a fun surprise–for us and for her.

This weekend, my guy and I shared a present I’d given him last Christmas–a weekend away, with a search for roots tied in.

We began with my roots actually–and spent Friday night and Saturday morning with my sister and brother-in-law. That, in itself, is always a gift. Plus the conversation, laughter, a delicious breakfast and chocolate chip cookies for the road. (Many thanks to the MacBuds! You are the best.)

And then we were on the road again–headed to Onset Beach in Wareham, Mass. Until this weekend, Wareham had always been a place that we passed through on our way to or from the Cape. Oh, maybe we stopped for  saltwater taffy sometimes, but that was about it.

This weekend changed everything. We didn’t stay there, but we spent plenty of time there–including in the Ford dealership because the check battery light came on when we were about an hour away. The nice mechanic replaced the alternator and belt and in less than an hour and a half we were on the road again. And thankful.

This is the view we think my guy’s great grandparents enjoyed daily. Back in the late 1800s/early 1900s, they owned the Onset Hotel. We weren’t exactly sure which building it was at first, but my guy isn’t shy (as some may think) and he talked to almost everyone in town. We were looking for one person in particular because we’d been told he might have information that would help us. I’m surprised the police didn’t come looking for us as we walked up and down streets, chatted with anyone we encountered and knocked on a few doors. We even visited the kind dispatcher at the local fire department. As I said, we talked to almost everyone.

This person told us about that person, who suggested we visit yet another person. Finally, we had confirmation–the hotel became condominiums in the 1980s/90s. The photo above is of a page from a 1925 booklet that a woman who owns a property management business showed us. She also called several people in town trying to get more information, to no avail. But we were thrilled that we could look  from her business and see the building.  And walk by it and enjoy the view and smell the sea air, just as his great grandparents had done all those years ago. If they had time, that is, because apparently they also owned a bar in Boston.

There’s a condo for sale. Maybe we should think about it. I don’t think so. We really aren’t beach people, even though we both grew up along the coast. We enjoy visiting the beach, but . . .

We spent Saturday afternoon stalking the area and returned there this morning. Finally, we’d located the man we were looking for. He gave us two more names–of people who may have some information, but they weren’t home today. Never fear, this story isn’t over yet. We have phone numbers.

And so the present continued. We drove over the Bourne Bridge to Falmouth, where my guy had spent many summers before his parents purchased a hardware store in Maine back in 1965.

Our first Sunday morning adventure was along the bike path.

While he headed down the trail for a run to Woods Hole and back, I moseyed along with camera in hand. You may want to stop reading now. 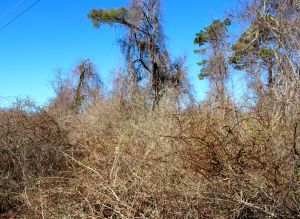 I was surprised by the overwhelming amount of invasive species. It makes our neck of the woods look practically invasive-free.

I expected panda bears to come out of this swath of bamboo. Fortunately, it’s only in one spot–at the moment.

Invasive species do always give me pause. On this land, I too, am an invasive. Just like the plants and insects that are not native, nor were my ancestors or my guy’s ancestors. They say what makes an invasive such is that there isn’t anything native that will feed on it, thus it will take over and smother the native species. Hmmm . . .

On to prettier sites, like this salt pond beside the path. 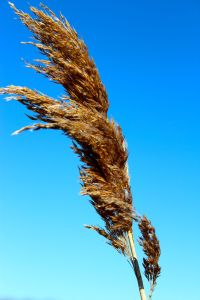 And the ubiquitous common reed, an invasive which I’ve always admired. There’s beauty in commonness. 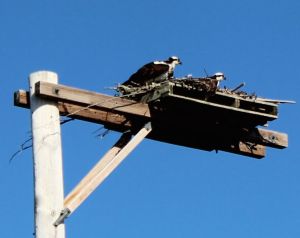 Nests on platforms or cross bars of power lines. So maybe man invaded, but he’s making amends by placing pallets on high.

This beach was my turn-around point.

If you do use the bike path, be forewarned. Panda bears may not be munching on bamboo, but you never know what you might see.

We went in search of the childhood cottage my guy’s dad had built. They sold the small house fifty years ago, and even though we’d last driven by about twenty years ago, it took us a bit to relocate it. Again, he approached a woman who was working in a neighboring yard. There were more houses on the road than he remembered, but it seemed to still be there–with a few changes. He didn’t knock on the door.

We did visit the beach where he and his siblings used to swim and cross the narrow channel to explore an island. On Google, I found the following: “A WW II Army amphibious Training base located in East Falmouth MA (Cape Cod). More exactly it was located on a peninsula now called Seacoast Shores in the village of Waquoit. The base was connected to a nearby island called Washburn Island by a bridge. We have circa 1950’s aerial photos showing the road and ramp to a bridge on the Washburn Island side but the bridge is missing. Aerial photos from 1942 to 1945 should show the bridge. Seacoast Shores is now a thriving waterside Community and Washburn has been returned to its natural state as a wilderness preserve in Waquoit Bay. ~Paul R. Flebotte, COL US Army Retired

On the left hand side of the island is the site of the bridge Col Flebotte mentions. 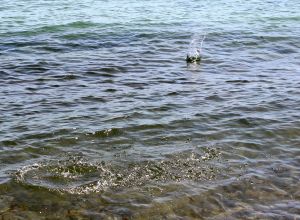 The afternoon found us skipping stones.

Admiring jingle shells (I don’t know their actual name, but as kids, we used to collect several in our hands and then shake them together to make them jingle). 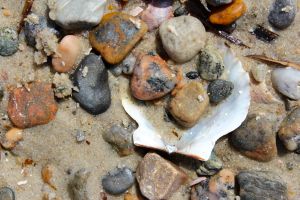 And other works of art. 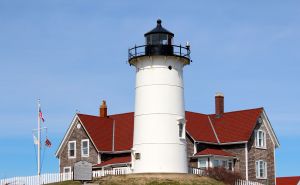 We paused at Nobska Lighthouse.

Reminisced about dinghies of our youth. 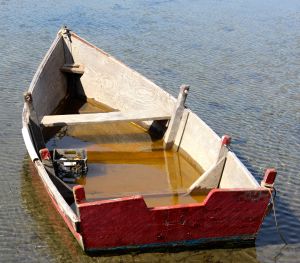 And realized that things are still on the quiet side.

Then we explored more beaches.

Discovered life on a rock–the same and yet different from what we find in the woods. 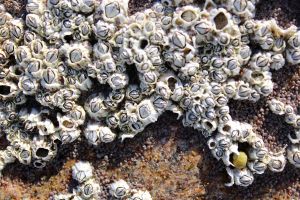 In the same fashion that lichens and mosses grow on the rocks around our western Maine home, providing a home base for others, so do the barnacles, mussels and oysters adhere in their habitat. 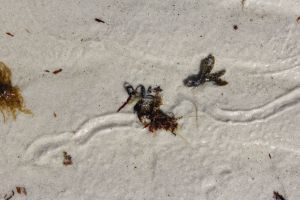 Lest you think I wasn’t tracking–snail trails.

Then there were the trees. I knew I was out of my comfort zone when it came to identifying some of these–especially with the gnarly behavior. Despite that, just as my guy stalked the good people of Onset, I stalked the trees of Falmouth.

Thankfully, someone made it easy for me. Signs. 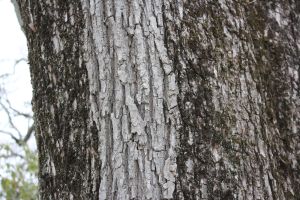 The  elm’s light gray bark has furrows with a V  or diamond shape, but they intersect at longer lengths than on an ash tree.

And the branches are wiry with alternate buds/branching.

I loved the camouflage look of this bark and only just realized that it is a sycamore. It wasn’t wearing a sign.

But it did have its signature calling cards–dangling brown fruits that some call button balls. 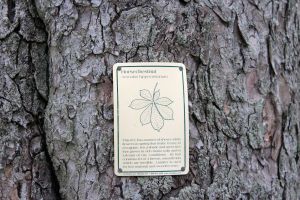 Thankfully, the horse chestnut identified itself. 🙂 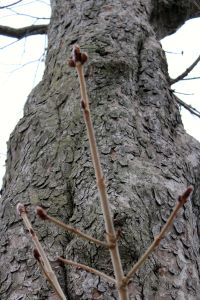 It also showed off its opposite bud pattern, making for an easy id.

Maple, Ash, Dogwood, Honeysuckle/Viburnum (aka Caprifoliaceae) and Horse Chestnut–trees with opposite buds. MADCap Horse is one way I was taught to remember that little tidbit.

And then it was time to head for the hills. We had a delightful stay and will go again, I’m sure–especially since we have more to learn about the family roots, but this sign on a shop near the inn where we stayed says it all.

Our feet may have left our home for a few days on this extended Mondate, but our hearts were always back here, well rooted in the Maine woods.

Thanks for wondering along on this lengthy wander.