There’s something about the Chip Stockford Reserve on Ladies Delight Road in Lovell that keeps pulling me back. I think it’s the history associated with this property that fascinates me. And the questions it raises.

From the start, there is a cellar hole and barn foundation.

About seven years ago, during a visit to the Lovell Historical Society, I learned that  Eldridge Gerry Kimball had purchased 200 acres on January 31, 1880 from Abraham E. Gray.

Various journals from that time period include entries about driving cattle over to the Ladies Delight pasture, picking cranberries over by The Pond, as they called Kezar Lake, picking apples, driving sheep to pasture, picking pears, mowing oats and trimming pines. Today, it’s the huge pasture pines, stonewalls and a couple of foundations that tell part of the story. I’ve also heard that this area was used as a cattle infirmary. According to local lore, diseased cattle were brought to Ladies Delight to roam and die, thus preventing disease from spreading to healthy cattle. 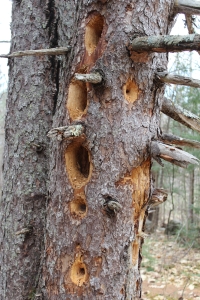 The big old pines provide investigation for others. 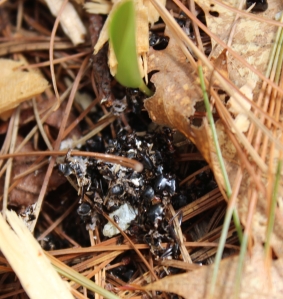 Who sometimes leave presents. Can you see the ant bodies? 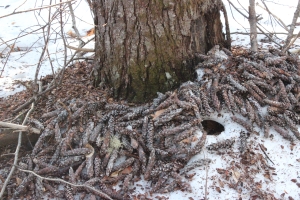 Yup, that’s snow. I took this photo in December because I was impressed with the stock pile of cones a red squirrel had made.

It took me a few minutes to locate the tree today. I wanted to see what the midden looked like and wasn’t disappointed.  In trying to find the tree, however, I developed an appreciation for the red and gray squirrels who cache their food and then return to it. Of course, if a gray squirrel doesn’t remember where it stored an acorn, then a turkey or deer may find a treat, or a tree may grow. No matter how you look at it, it’s all good. As for me, I need to learn how to use our GPS.

Another story about Ladies Delight hill is that this is the place where people would come to picnic in the 1800s. Did the women get dressed up to enjoy a day out, a break from their farming duties? I have visions of them wearing long dresses and bonnets and carrying picnic baskets. But could they really afford a day away from their chores?

The blue trail loops around the 155-acre reserve, and a spur trail (red) leads to the vantage point–a view of Lower Bay on Kezar Lake and the White Mountains.

A bench at the outlook was placed in memory of Chapman “Chip” Stockford, a founding officer of the GLLT who lived in the neighborhood.

On the short spur between the red arrow and the outlook, the variety of trees offers a study in bark. Eastern White Pine–with horizontal lines on the scales.

Flaky, cinnamony-gray (is that a word?) scales of Eastern Hemlock.

And the smooth, silvery-gray American Beech–with some blotches of lichen adding a dash of green and white.

And the bull’s eye target on Red Maple.

Finally, the flattened ridges of ski tracks that run down a Northern Red Oak. Back on the blue trail, the sun poked through the clouds, shining on pines that represent a variety of ages. I’m not sure who lived in the house above this cellar hole, but it’s always fun to visit and wonder.

In her book, Blueberries and Pusley Weed: The Story of Lovell, Maine, Pauline W. Moore wrote that Ladies Delight, “was not named for the view. Nor because it made a delightful walk for ladies to take on a Sunday afternoon or because it was covered with wonderful blueberries . . . (It was) named in sarcasm because women who tried to live in two houses built there could not endure the loneliness and isolation.”

Was this one of the houses? It’s been a long time since any vegetables were stored in this cellar.

As I was told at the historical society,  the bridge across The Narrows wasn’t yet built when the ladies lived there, so the only way to get to the other side was walking across the ice.

No visit to Chip Stockford is complete without a visit to The Rock. Today, I startled two grouse that flew up from behind it. 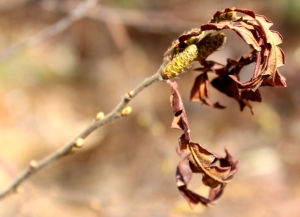 A few more things to see as I headed out. Sweet fern, which is really a shrub. 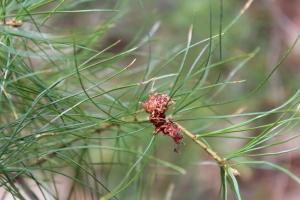 And a phoebe nest under construction.

This lady was delighted to have time to wonder and wander. Thanks for taking a look.

2 thoughts on “This Lady’s Delight”