I want to be like Ursula, my spritely little German friend who is a naturalist extraordinaire and loves to share her knowledge and stories.

Always with a smile. 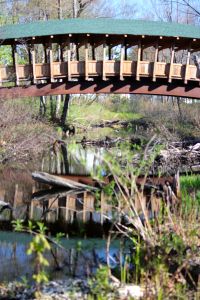 I had the pleasure of being in her company today, after an hour of birding in Pondicherry Park,

where a Baltimore Oriole serenaded us.

On to Holt Pond for Ursula’s wildflower walk hosted by Lakes Environmental Association, as was the bird walk. Looking a bit like a disco ball is the blooming Dwarf Ginseng.

Though it isn’t in bloom yet, I saw lots more Indian Cucumber Root today and have a theory I’m questioning about this plant. I know that if it has only one level of leaves, it doesn’t flower or fruit. It needs that second deck to be productive. I’ve heard people say that when it has the second tier it is a two-year old plant, while the first level is a year old. Is that true? The Canada Mayflower, Bunchberry and Wild Oats all do the same. Does that mean that all the single leaves we see are one and all the doubles are two and none reach age 3? Or is it that some years some of these plants put more energy into producing sugar and thus are able to flower, like trees have mast years? And furthermore, am I making any sense? 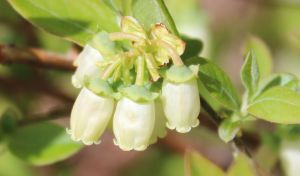 So many flowers and so many of them white or creamy yellow, like these Highbush Blueberries.

Since we were crossing the Red Maple Swamp, I can’t resist showing their development.

Along the boardwalk that winds through the swamp, we saw this banjo player–a Green Frog. Some call it a Bronze Frog because more than half its body is bronze. Thus the need for those Latin names–Rana clamitans. 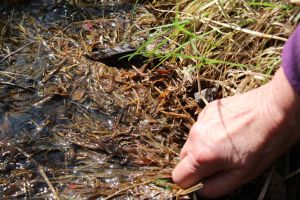 My friend, CC, squatted down to catch it. 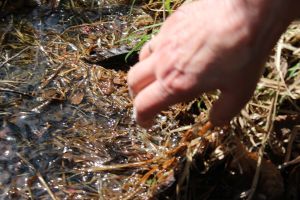 And came away empty-handed. 🙂

Who do you want to be when you grow up?

I pose the question to these crosiers.

Do you see the fuzzy brown wool coat they wear? 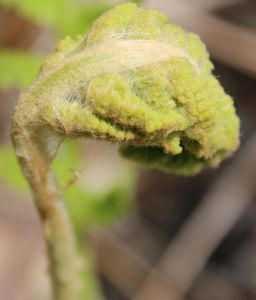 Their fronds begin to unfurl.

And soon we’ll know them as the Cinnamon Ferns they are becoming.

Continuing on, one of our leaders, Mary Jewett of LEA, spotted this rainbow around the sun. 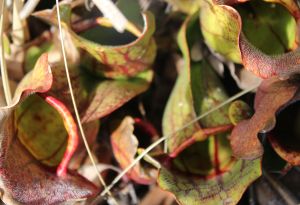 As is always the case, our heads were bobbing up and down, trying to take in everything there was to see. Pitcher Plants pull us in every time. Well, not literally, thank goodness. 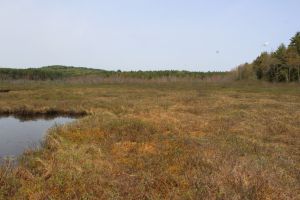 We were on the quaking bog, a mass of sphagnum moss, flowering plants, shrubs and decaying vegetation that floats on the water. It looks safe to step onto, but . . . it too, would like to pull us in and preserve us for eternity.

Holt Pond–like all of us, it’s ever changing as it matures.

It’s Ursula’s energy and engaging personality that wow me every time we share moments wandering and wondering. I don’t want to be her, but it would be an honor to emulate her even a tiny bit.