For a few minutes, I stand still and watch a chipmunk leave the safety of his hole and race under our kayaks before entering the refuge of bushes beyond. Out of sight, I still have a general idea of his whereabouts as I hear leaves crackle with his movements. Moments later, he scampers to the top of a kayak, pieces of a dried leaf dangling from his stuffed cheeks and mouth. 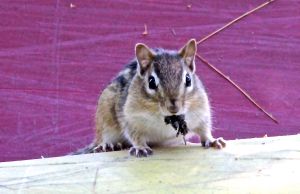 He’s a brave soul as the main entrance to his underground mansion is in the open, within easy sight of predators–especially birds of prey. 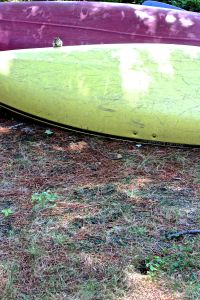 Do you see the hole in the ground? His mansion consists of a network of chambers–for sleeping, feeding and birthing. Though chipmunks are not true hibernators, they do enter a state of torpor and sleep for days or weeks on end during the winter, waking occasionally for a snack.

So . . . in August, this small critter busily readies his home in preparation for what he believes is to come. He uses the shredded leaves to build a nest. And he stores a cache of nuts and seeds.

It seems to me that this little guy (I assume he’s a male since his name is Chip) thrives because of his faith–though he probably doesn’t call it that. He has faith that he’ll survive the mad dash from his tunnel to the huckleberry bushes and ferns beside the lake. And he has faith that he’ll get all of his housekeeping chores squared away before the snow flies.

Faith–it’s easy enough to have when everything is fine–when the sky is blue and the nuts are plentiful and we are safe; when we have enough of everything we need and no reason to expect that to change.

But . . . when the storm clouds gather and the torrential rain floods our nest or a hawk approaches with its claws extended and our world turns upside down–then we have to practice trust. Right now. Right here. Easier said than done.

I don’t know what the future holds for my little friend, Chip, but I’m sure things don’t always go as planned and yet he continues to work hard every day. I should take a lesson from him.

And now for some other cool shots I took today.

I made my own mad dash this morning to get this photo. I heard their high-pitched whistle before I saw them. Two bald eagles soared high on the thermals so I grabbed my camera, only to discover as I aimed that the battery was dead. Back inside for a quick change and by the time I returned I saw only one. 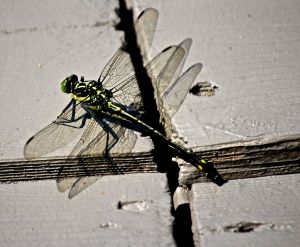 And on the dock–I think it’s a green marsh hawk dragonfly. 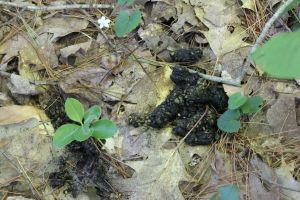 Just when you thought I wouldn’t show any scat photos till winter–gotcha! Interesting juxtaposition of raccoon scat beside wintergreen and dainty dewdrops. Word of warning: don’t get too close to raccoon scat. Well, you probably shouldn’t get too close to any scat, but particularly this species, which contains Baylisascaris procyonis or raccoon roundworm.

I’ll end with a smiley face provided courtesy of a maple-leaf viburnum.

I never know what I’ll find as I wander but I love the lessons and moments of wonder discovered along the way.

Thanks for stopping by.

4 thoughts on “Living by Faith and other Fun Finds”