My relationship with the Saco River began in 1985 when I was a YMCA camp director in Laconia, New Hampshire. My charges were tweens and teens. Each week they piled into the 15 passenger van and I took them on an adventure–just as much fun for me as for them.

I’d scoped out this particular canoeing/camping trip ahead of time and felt confident that we had a good plan.

We rented canoes from Saco River Canoe and Kayak in Fryeburg, Maine, and the first leg of our journey was a long day spent paddling down the river and then up the old course to the covered Hemlock Bridge. My copilot was a 16-year-old lifeguard named George.

Though we’d practiced canoeing techniques in the Y pool, the real thing was a challenge.  Once on the river, the kids eventually learned to paddle in an almost straight line after many circular attempts.

At last we reached our destination, set up camp, told ghost stories, spooked each other and settled down for the night. Sleep alluded me so I watched the lightning show and listened to serenading bullfrogs.

In the middle of the night, one of the girls yelled out, “Help! Somebody! Help me!” When I arrived at her tent, I asked, “Dawn, did you have a nightmare?”

“It wasn’t Dawn. It was me,” replied Melissa quietly. “The zipper on my sleeping bag just got stuck.”

The next morning we paddled back to the main course of the river and enjoyed a pancake breakfast on a sandbar. As the day went on, we lolled about–splashing each other, getting out to swim, and singing silly camp songs.

Until . . . a few girls forged on and forgot to pull over when they saw Walker’s Rip. Two canoes went over the rip without any problems. The third got caught atop two rocks in the rapids. The girls panicked when water began to flow in one side and out the other as the bow and stern bent toward the river. The current and slippery rocks made the ten feet from the riverbank feel like ten yards. People on either side came to the rescue. In a fast few moments things went from bad to worse and we had several injuries accompanied by lots of high drama, including an ambulance ride to Memorial Hospital in North Conway, New Hampshire.

The diagnosis: everyone was fine with a few minor bruises. The prescription: ice cream and Tylenol.

Though we were supposed to camp out that night, the kids were done, so I drove back to Laconia and the Y director met us there (with a 6 pack to calm my nerves.)

As far as summer jobs go, this ranks number one on my list. I don’t know what has happened to any of the kids, but I hope they still remember the pranks and fun we shared. (Number 2 favorite summer job: painting Yale bowl)

A year later I landed a teaching job in western Maine and the Saco River and Hemlock Bridge became part of my place.

So it was that yesterday, my guy and I left one truck at the Brownfield Bridge and drove to Lovewell Pond to launch our tandem kayak. It was actually a reconnaissance mission for me because the Upper Saco Valley Land Trust has asked me to lead a paddle on this portion of the river in a few weeks.

Mount Tom, a Roche Moutonnée, is visible to the left. This asymmetrical hill features a gently sloping up-ice side that has been smoothed and polished by a glacier. The other side is  abrupt and steep–the down-ice side where the rocks were plucked off, leaving a more cliff-like appearance.

We’d never been on Lovewell Pond before, so were a bit astonished by the white sandy beaches accentuated by the mountain backdrop as we looked toward Fryeburg and North Conway. 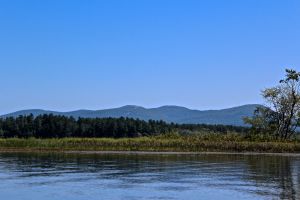 Pleasant Mountain also forms part of the backdrop, giving us a sense of direction. Home is on the other side of the far left peak. 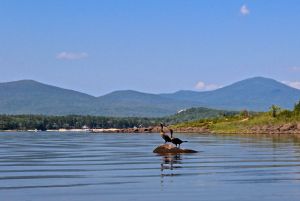 Paddling about for a bit, we checked out the local wildlife, including this pair of cormorants and

And then we were ready to begin our journey. We thought we might be a wee bit crazy to be on the river this weekend, along with the boys from deliverance, but we only met a few. For the most part, we encountered families and friends enjoying a beautiful day in Maine. And a clean river thanks to the Saco River Recreation Council. 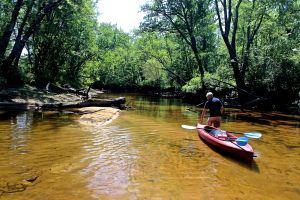 Being September, the river was quite shallow in some spots. But walking in the water felt good.

Around each bend, we reminisced about previous river runs, including the time we did a much longer trip in an inflatable raft–we were young, in love and clueless. And uncomfortable. Now we are old, in love and still clueless. But happy.

Though the river is at a low point, you can tell by the bank that water rushes through here. The silver maple, known for the silvery color of its leaf’s underside, is fast growing and a bank stabilizer, but it also succumbs to the river’s force.

As we floated along, I began to wonder what I should point out in a few weeks.  Yes, there’s the silver maple floodplain forest, which includes red maples. Royal fern, sensitive fern and ostrich fern were visible along the way. And some shrubs and plants. Finally, we came upon this American elm leaning over the river–large and healthy with its asymmetrical leaves. 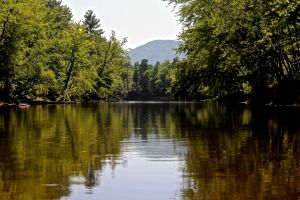 We were close to our pull-out point when I saw some white and red pines and thought I might talk about the King Pines–those massive pine trees that were marked with the king of England’s arrow, so selected because they grew straight and tall and would be perfect for ships’ masts.

I may also mention the river’s curse, but I might save it until the end when Burnt Meadow Mountain is visible in the background.

According to legend, in 1675 the wife and infant son of Squandro, chief of the Sokokis tribe, were playing on a river sandbar when they encountered three rowdy, drunken English sailors.  The mother and child were laughing and didn’t hear an approaching canoe. One of the three sailors claimed that a papoose could swim like a wild animal (dog paddle) naturally from birth. The others doubted him. To prove it, the man jumped out and grabbed the child. The mother watched in horror while the sailors threw her baby into the water. She grabbed the baby and ran to Squandro. It was too late. Squandro raised the limp body toward the sky and said, “As long as the grass grows and the water runs, it shall be the will of the Great Spirit that every year the waters of this Great River shall take three White Men’s lives.”

There is also a version whereby the mother was pregnant and she, her infant and her unborn child all died.

Some say the curse ended in 1947 when no lives were taken. That was also the year of the Great Fires, including in Brownfield, our take-out point. Related?

Though our trip yesterday was short (about four miles), this wander has been a bit long. Thanks for coming along for the ride.

One thought on “Saco River Mondate on a Sunday”