A friend and I drove to Evans Notch today with the mission of exploring a trail that was new to us. The Leach Link Trail connects Stone House Road to the Deer Hill trail system. 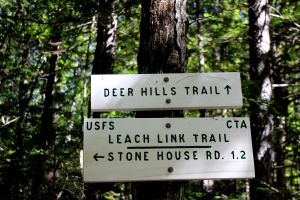 We started at Stone House Road and turned back at the Cold River Dam. Not a long trail, certainly. And rather flat for the most part. Despite that . . . it took us four hours to cover 2.4 miles. You might say we stopped frequently.

There was a lot to see along this enchanted path. And questions to be asked. 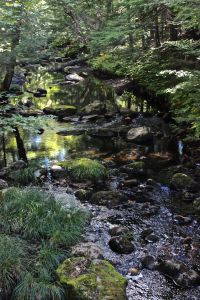 We walked beside the Cold River as we passed through hemlock groves and mixed hardwoods covered with a myriad of mosses and liverworts. 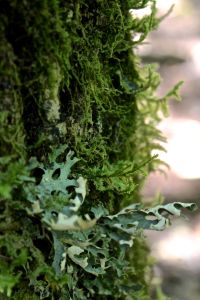 Because it had rained last night, Lungwort, an indicator of rich, unpolluted areas, stood out among the tree necklaces. Why does it turn green when wet? 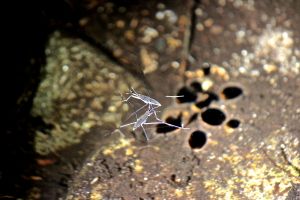 The shadow of the water strider tells its story. To our eyes, it looks like their actual feet are tiny and insignificant. What we can’t see is the  fuzzy little hairs that both repel water and trap tiny air bubbles, thus allowing them to float or skate along the water’s surface. But still, why is the foot shadow so big while the body shadow is more relative to the strider’s size? Is it the movement of the foot against the water that creates the shadow? 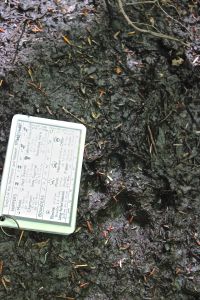 While the river was to our right on the way to the dam, we noted ledges on the left. Prime habitat for the maker of this print: bobcat. You might be able to see nail marks in front of the toes. We always say that cats retract their nails, but in mud like this, traction helps. 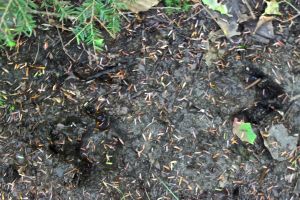 A little further along we discovered the bobcat was still traveling in the same direction and a coyote was headed the opposite way. What were they seeking? What was the difference in time of their passing? 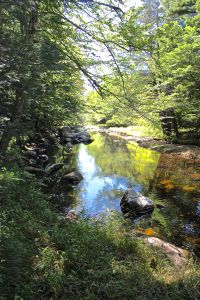 Periodically, we slipped off the trail to explore beside the river. 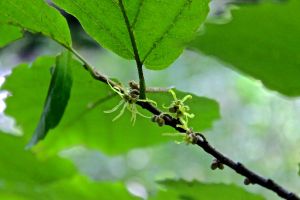 Ribbony witchhazel blossoms brightened our day–not that it was dark. 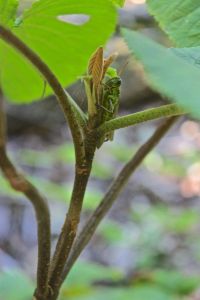 We weren’t the only ones taking a closer look at hobblebush. 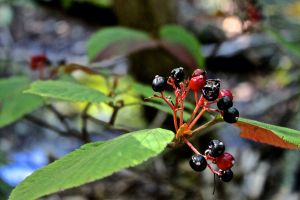 As its leaves begin to change from green to plum, the berries mature and transform from red to dark blue. Will they get eaten before they all shrivel? We think they’ll be consumed by birds and mammals. 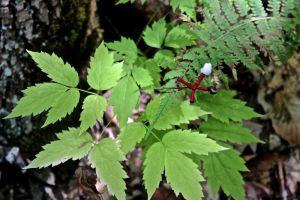 Most of the “doll’s eye” fruit is missing from this white baneberry. The archaic definition of “bane” is something, typically poison, that causes death. I’ve read that  ingesting the berries can bring on symptoms such as stomach cramps, vomiting, diarrhea, delirium and circulatory failure. Think: respiratory distress and cardiac arrest. YIKES. So what may have eaten these little white eyeballs? Wildlife may browse it, but it’s said to be quite unpalatable and low in nutrition. Interestingly, birds are unaffected by its toxic qualities. 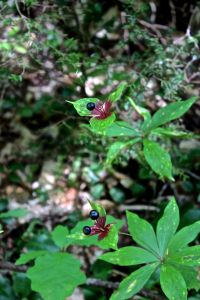 Berry season is important to migrating birds. The purplish black berries of Indian Cucumber-root are only consumed by birds. Other animals, however, prefer the stem and cucumberish-flavored root of this double decker plant. Why does the center of the upper whorl of leaves turn red? Is this an advertisement for birds? 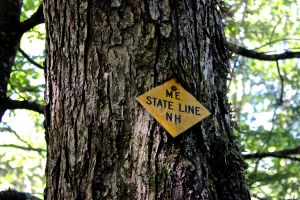 Soon, well, not all that soon, we arrived at the state line and passed onto Upper Saco Valley Land Trust property. 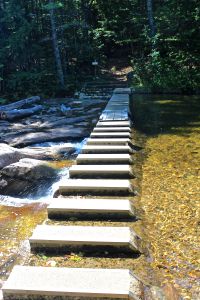 And then we came upon the dam. 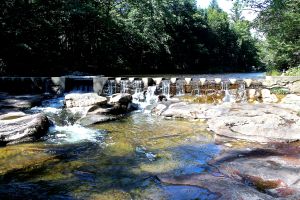 It was the perfect day to sit on the rocks and eat a peanut butter and jam sandwich–with butter. 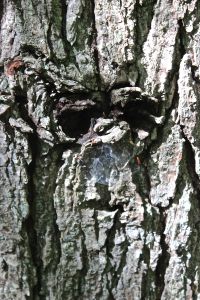 As we walked back toward Stone House Road, we realized we were being watched. Perhaps this tree muse has all the answers.

Thanks to P.K. for a delightful wander and a chance to wonder together.

2 thoughts on “Questions To Be Asked”