Every weekend in Maine should be named the Great Maine Outdoor Weekend. Especially when the weather cooperates.

This morning’s fog didn’t daunt the crowd of 20+ that gathered for the Upper Saco Valley Land Trust’s paddle to celebrate being outdoors in Maine.

When we arrived at the boat launch on Lovewell Pond in Fryeburg, we could barely see the trees that line the access route to the Saco River.

Ever so slowly, the sun burned through. 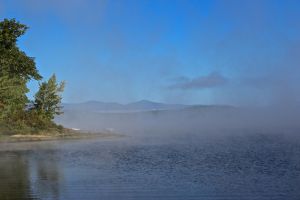 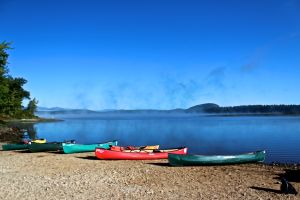 But the sun felt heavenly.

I think this guy felt the same. We were about to shove off when a member of the group found this baby garter snake in his canoe. I let it go on the shore and it quickly slithered away.

By the time we paddled onto the pond, the mountains were in full view, bookmarked by Kearsarge and Washington on the left and the Baldfaces on the right.

The water was shallow on the access route so twice we got out and walked. As you would expect, the water was warmer than the air, though the air temp continued to rise.

A few fun finds along the way included four bald eagles. This was one of three immatures that we spotted. Our bird count included a great blue heron, cormorant, ravens, blue jays and cat birds.

We were in the silver maple floodplain where these magnificent trees hang low over the river. Their network of roots are equally beautiful. 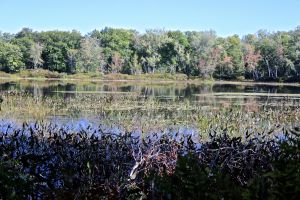 For the better part of our trip, the river bisects Brownfield Bog (Major Gregory Sanborn Wildlife Management Area), so we decided to jump ship, climb up the muddy bank and take a peek. Even the poison ivy didn’t deter us. 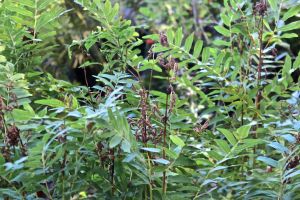 A common herbal feature of a silver maple floodplain community is royal fern. At the point where we stood to admire the bog, the fern grew abundantly in front of us. Its spore stalks are now dried up. 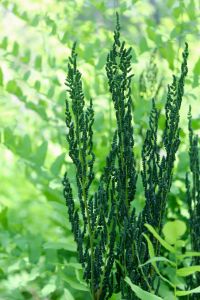 In early June, they would have stood tall, looking like the royal crown for which this fern was named.

It is fall. The days are obviously getting shorter and we are just beginning to experience cool nights when the temperature is below 45˚. Any sugar made in the leaves during the day can no longer move to the trees. When the sugar becomes trapped in the leaves, the red pigment called anthocyanin forms and the green pigment (chlorophyll) disappears. The leaves are beginning to turn along the river, but this one was especially colorful.