My guy and I set off on a quest this morning–not a long and arduous search, but a search none-the-less. 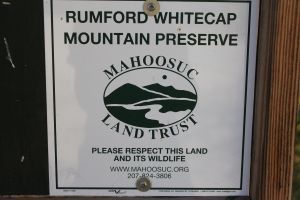 The setting for our quest–Rumford Whitecap made possible by the Mahoosuc Land Trust. 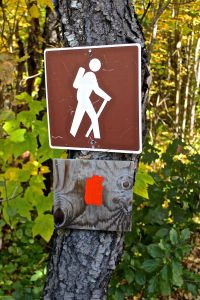 I couldn’t resist taking a selfie at the trailhead.

Though this is a popular trail during blueberry season, we never think of it until fall.

And this fall is particularly spectacular. The red maples are on fire everywhere we turn. 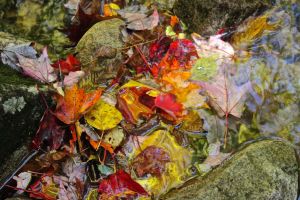 Our initial quest was two-fold: 1. to hike to the summit, and 2. to absorb as much color into our mind’s eye as we could. The palette will change soon ’round these parts and though we love winter, we relish the dance of color that seems to last only for a fleeting moment.

Aptly known as the red/orange trail, we ascended the mountain, ever mindful of the water on the rocks. Along the way, we recalled hikes along this same trail much later in the season, when crampons were a necessity. 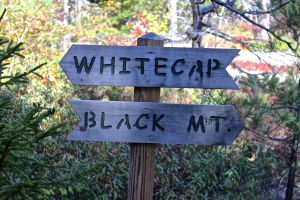 Though an option presented itself, we stuck to our quest for the summit of Whitecap. We’re saving Black Mountain for another day.

As we moved out of the woods and onto the bald ledges, the tapestry revealed itself. 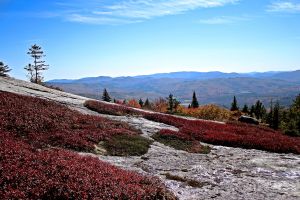 No matter where we turned, color begged to be captured. 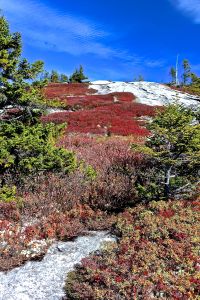 The whitecap at the top of this photo is not the summit, but our destination was getting closer with each footstep.

We weren’t the only ones on a quest. I’m not sure of the species, but this lone caterpillar moved quickly across the bald face.

Finally, we reached the top, where the display was over the top.

It’s always fun to find the survey monument–bronze disks used by surveyors since 1879 for mapping purposes.

In the middle of this photo are the larger-than-life satellite dishes located in Andover. When I was a kid and we vacationed in Maine, our parents took us to the Andover Earth Station. It was one of the first satellite stations in the USA, built in 1961 with the Telstar 1 satellite–an experimental link between North America and Europe. The Telstar Bubble, which housed the immense horn antenna, was taken down in the 1990s. 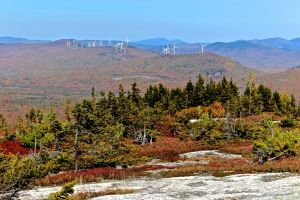 For the past few years, these wind turbines have been visible. Today, we noticed two other ridges decorated with turbines. I’m of two minds on this topic–the old wishy washy self that I am. In Canada,  wind turbines are located across the landscape and even as we hiked the Cape Mabou trails on Cape Breton Island last week, we stood below one and listened to its airplane engine-like sound, but we didn’t hear it until we were quite close. I actually think they are quite beautiful as they turn–ballet of a sort. 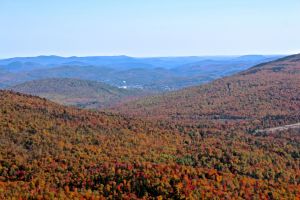 In the midst of the mountains, a peek at Rumford. 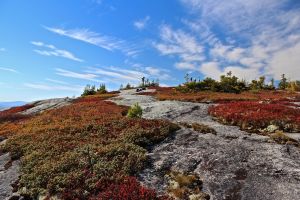 After our usual PB&J, I explored further along the ridge while my guy napped. You might be able to spot him in the center of the top photo. Of course, he did run this morning before hiking–he’s training for the Moose Pond Half Marathon, a race that raises $$$ for the Maine Adaptive Ski Program at Shawnee Peak in Bridgton.

It was a short nap–given that it was on a bed of rock. 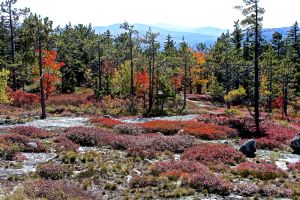 We hiked down the Starr trail, where our color quest found further fulfillment. 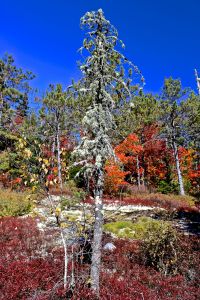 As we descended, we switched from one community to another.

Sometimes, it was the bracken fern that lit the way. 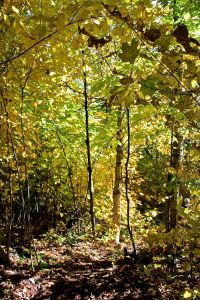 Other times, the sugar and striped maples cast a bright light.

We took only photos and memories, and left only footprints–mine on the left, his on the right.

Before our Mondate ended, we decided an ice cream was in order. We hike so we can eat. This turned out to be the more arduous part of our quest–hiking 6 or so miles was a cinch in hindsight. A drive through Bethel revealed no ice cream shops. We continued on Route 2 for a bit and found one hopeful spot, but it had closed an hour earlier. My mouth was watering for a peppermint stick hot fudge sundae–with whipped cream and a cherry on top. Half an hour later, with my tongue hanging out, we stopped at Melby’s in North Waterford. After purchasing a pint of Hagen Daz chocolate (not a sundae, but sometimes you just have to make do), we turned and my dear friend Ursula Duve appeared before our eyes. She was on her own ice cream quest. I had the pleasure of introducing her to my guy and he instantly fell in love. As we chatted about our outdoor adventures, Ursula gave us this advice, “For as long as you can do it, do it.” Well, maybe those weren’t her exact words–after all, I did have ice cream on my brain–but they’re mighty close to  it. She and her husband have hiked many more trails than we’ll ever conquer, but we’re thankful for the opportunity to wander together as often as we can–especially on a Mondate. 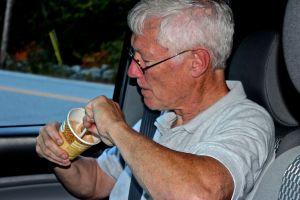 We finished that pint in record time. It was arduous, but someone or two had to do  it.

A Mondate with  quest or two or three–always brings a smile to our faces.

6 thoughts on “Mondate with a Quest”