To say the colors have been fantastic this fall is an understatement. Maybe they are just as spectacular as last year’s display, but I don’t remember. Or maybe it’s that the leaves turned at a later date than in recent history and the anticipation was rewarded by the brilliance. 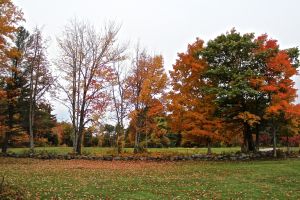 All I know is that I can’t get enough.

As I drove toward Lovell this morning, a break in the treeline beside the road forced me to back up and jump out of the truck. I recalled another October when the foliage caught my attention–I can’t believe I remember this, but it was either 1974 or ’75 when I often traveled the back roads with my high school cohorts–Carissa and Sarah. I only hope I remember this fall as vividly as that one has always stood out in my mind.

It felt like rain when a couple of friends and I walked along the short trail at the GLLT’s John A. Segur Wildlife Refuge on New Road this morning. We didn’t get far because there were so many wildflowers to view, some still in bloom and others gone to seed. Like so many trails, this is an old logging road. It would be so easy to dismiss it as an ugly tangle of shrubs and weeds. But it’s hardly that. Gray and paper birch grace the border of the road, mixed with evergreens and a few red maples.

But the flowers really caught our attention today. One Gall of the Earth displays its nodding head. 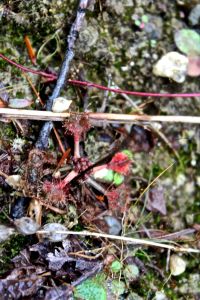 The round-leaf sundew is beginning to die back.

It seemed like in most cases only one plant of the species still had flowers, like this silverrod, our only white goldenrod. 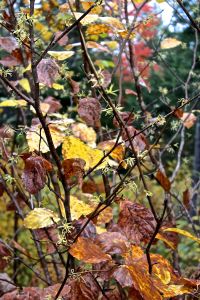 Meanwhile, the witch hazel is in full bloom.

Apparently, its ribbony yellow flowers bloom late in order to take advantage of pollinators at a time when everything else has finished blossoming.

We didn’t have a lot of time to spend at the property, but this little guy caught our attention–a young wood frog. He’ll need to find his way under the leaf litter soon.

On the way home, another photo call. 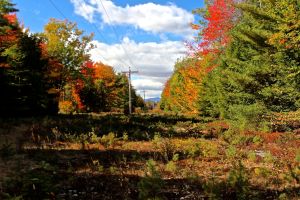 And later in the day, some work behind me, I stepped out the door again. It’s a compulsion a this point; a strong desire to catch every shade of yellow, orange, red and purple before it’s too late. I haven’t turned north on the snowmobile trail under the power line in a while, so today I did. 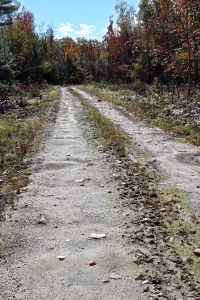 My journey took me down a logging road that has become a super highway in the last two years. I think the operation is finally over.

The landing and beyond have been my destination for 23 years. I’ve watched the succession play out in this space. And now it will happen again. I have to look at it as a lesson–watching the species gradually take over this muddy lot. The land was probably last logged about thirty years ago, so I met it in its early stages. Now I will get to see it transform from the get go. And I have to say, it’s one of the cleanest log landings I’ve ever encountered.

Considering how wet it is in these woods, I’m impressed with the forester’s work.

Ferns already grow in roads created a year ago.

Grass fills in others. 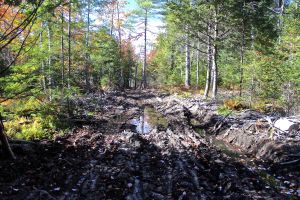 But mud is predominate and I love mud. 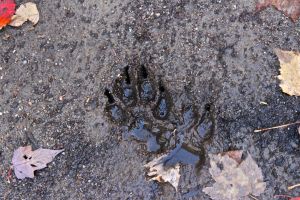 Bobcat tracks were everywhere. It’s been my understanding that bobcats don’t travel trails like coyotes and foxes, but instead cross over them in a corridor that is about 40 feet wide. My observance, however, is that this isn’t always the case. Heck, I’d follow the easier trail as well. I did today. I started to return home via one of the trails I use when on snowshoes, but because this is a wet countryside, the slash left by previous loggers and the most current one makes that trail almost impassable until the snow flies (which may be soon–at least for a few flakes). 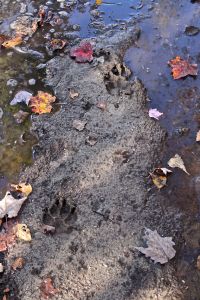 I’m curious about the number of tracks. Bobcats are solitary except during breeding season in February-March. Are these youngsters? Do they travel together? Or is this an individual passing through repeatedly?

Deer are among a bobcat’s prey and thus part of the reason this is such fertile hunting grounds. I love the view of both passing through this space in opposite directions. And the turn of the bobcat’s toe nails, which show clearly in the mud even though they are able to retract them. The deer also seemed to have slid into a turn. Though you can’t see my boot prints here, I love that the three of us passed this way side-by-side, at different moments. I looked for them, but am sure they were much more astute about knowing my whereabouts.

Puddles along the way were filled with fallen leaves 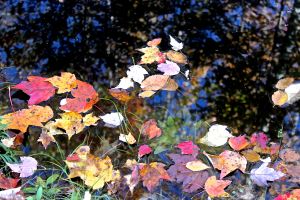 and reflections of trees to which they once clung.

Back on our land, I found an old squirrel drey that had fallen from quite high in a tree.

And noted the red maple twigs–new buds already offering hope for next year, leaves still hanging on, and a bright green leaf scar from one that fell off recently.

At the end of the day the leaf pile grows. I guess we can only hang on to the old for so long.

12 thoughts on “Hanging On”