I needed some time for quiet contemplation mid-morning, so I was thankful my guy was working for a few hours.

I knew exactly where to go to sort out my thoughts. 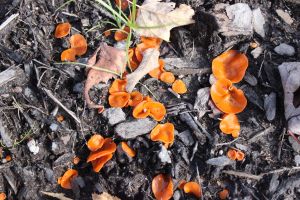 Along the way, I made discoveries like this–orange peel fungi (Aleuria aurantia), which prefers disturbed areas. Hmmm . . . and disturbed brains? 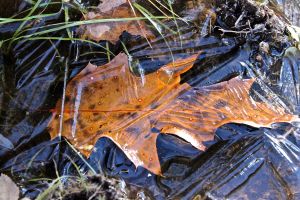 I found a Northern red oak leaf frozen in ice. But it won’t remain that way forever. Eventually, the ice will melt and the leaf will gradually break down, adding nutrients to the soil. It takes time. I need to remember that.

The witch hazels are in full bloom and they made me smile. Life is good after all. 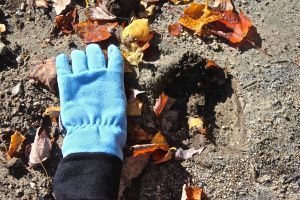 Another reason to smile–moose tracks. Not the ice cream, but the real thing. Though the ice cream is mighty delicious. Our sons tease me because I mine a gallon for the big chunks of chocolate. 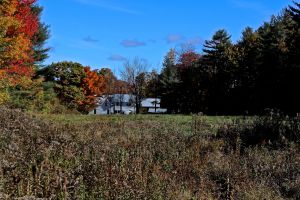 Home sweet home at last. My brain was cleared and I knew the path to take. 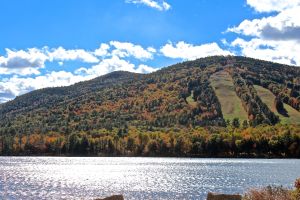 After lunch, my guy and I also chose a path. Our destination–the one and only Pleasant Mountain. We planned to leave one truck at the bottom of the Ledges Trail and the other at the Bald Peak trail head. Lots of other people also took advantage of the crisp air–a day meant for hiking. 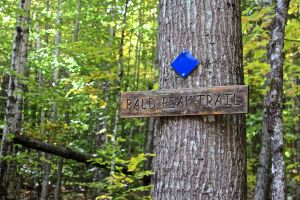 where steps lead the way to the new trailhead. Thanks to Loon Echo Land Trust for all the work they and their volunteers and the AMC did to recreate this trail. My guy hadn’t been on it this year and he joined me in singing its praises. 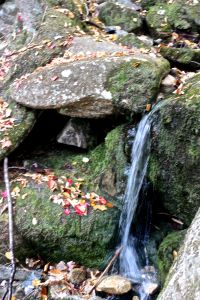 Below Needle’s Eye, water cascades over the rocks. 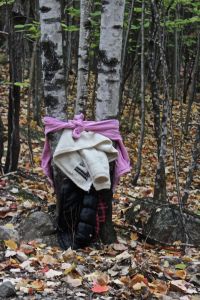 and found a thrift shop along the way. I only hope the owners of these jackets didn’t regret that they’d left them on the lower portion of the trail. The climb up is sweat inducing, but the wind at the summit–brrr.

I love this peek back at the causeway by Sabattus Island, where I had taken the photo of the mountain about an hour previously. 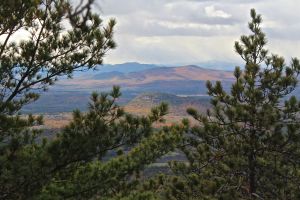 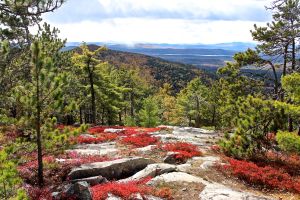 The fall foliage is beginning to wan, but ever so slightly and the blueberry plants provide a colorful contrast. 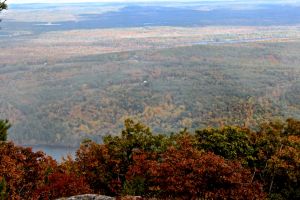 and the next it was clouded by waves of flurries. Snow flurries 🙂

Step for step, I followed my guy who sported his Marine Corps Marathon jacket. It’s been a while since he’s run a marathon, but only a year since he last ran a half marathon. He’s in training again–the Moose Pond Half Marathon is in two weeks. He ran the course yesterday–13.1 miles around the pond. I’m mighty proud of this guy–he’s raising money for the marathon’s cause–the adaptive ski program at Shawnee Peak. If you are so inclined and want to support him, please stop by his store. This is only one of the numerous things he quietly does for others. 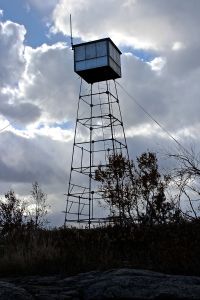 At last we reached the fire tower at the summit. 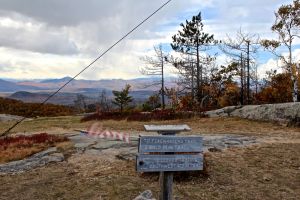 It was a wee bit windy as the flag indicates.

That didn’t stop us from pausing 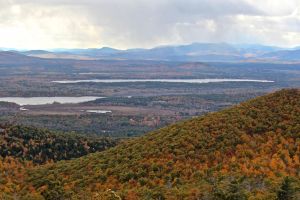 to take in the view. Yes, that is snow falling from those clouds. But only flurries.

On our way down the Ledges Trail, Moose Pond again came into sight.

I was thankful for yet another opportunity to enjoy a mountain high with my guy–and overcome the low points of the day.

This may be a Sunday Mondate. Not sure what tomorrow will bring us. That’s the thing about life and nature–we never completely know everything. I like that. Lows and highs–it keeps us wondering and wandering.