There’s an under-appreciated beauty in our midst right now. It’s one that’s easy to dismiss, but taking the time to look brings great rewards. 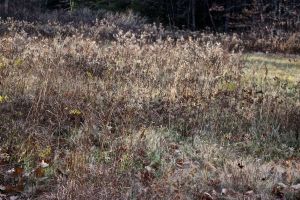 What may look like a field of weeds to you, is actually a perfect place to sit and wonder. To admire the structure and form of each wild flower. To watch and listen for wildlife that finds nourishment and cover here. 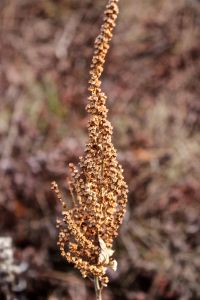 This particular plant has earned two common names: Hardhack because its woody stem makes it hard to hack down; and Steeplebush because its summertime rosey-pink flowers grow in a steeple-like structure. 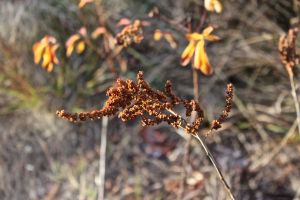 Come fall, it turns a golden brown. Hardhack (Spiraea tomentosa) grows to about two-four feet tall and features short, closely-spaced branches. I should note that we call it a wildflower, but it’s actually a shrub.

Thoreau described Hardhack as one of the “other strong-stemmed plants, those unexhausted granaries which entertain the earliest birds . . . ” And here is a bird’s eye view of the fruit–a tiny pod consisting of five parts, reminiscent of the rose family.

A relative of Hardback is Meadowsweet (Spiraea latifolia).

Growing equally as tall, Meadowsweet’s stems are reddish or purply brown. It differs from Hardback in that the flowers tend to have a more pyramid-like structure at the ends of branches, forming a broader top.

But the family resemblance is visible in the five-part fruit.

While the Spiraea family grows in close association with each other, children not wandering far from their parents, a loner in the field is Indian Tobacco (Lobelia inflate). The papery two-parted capsules are round and hollow–some still held a couple of seeds.

One of the most stunning displays mixed among the wildflowers is the Bulrush, a grass. These were blowing in the breeze today, their downy seeds ready for dispersal.

And not quite ready to give in to the seasonal change, a Black-eyed Susan.

Its species name is Rudbeckia hirta. Apparently it was named by Linnaeus for his botany professor, Olaf Rudbeck. Hirta refers to the hairs that cover the leaves and stem.

My question is, will this one make it to the fruiting stage? Will its gumdrop seed head have a chance to stand tall in the winter landscape? I’ll have to keep an eye on it.

There’s so much more to notice in the world of winter weeds, but it was time to head in. On the way, a fresh rub. Some dear sole was in a shedding mood. Though this Striped Maple will probably survive, it took a beating as a rubbing post.

All about, there’s under-appreciated beauty. It’s up to us to pay attention and wonder. I, for one, accept that mission and hope you’ll join me as often as you can.