Shopping on Black Friday is the perfect tonic following a Thanksgiving feast. And so I was excited that my friend, J.M., agreed to join me for the venture–and even happier that she offered to drive.

Our destination–the MDT store in Fryeburg. Everything we needed under one sky roof.

The first department we visited was decked out in shades of red.

The rusty inner bark of this Northern Red Oak practically jumped out at us. How could we resist such temptation? Add it to the cart.

Sometimes the display made us stop and wonder.

We hunted about to make sure our identification was correct before we settled on Pitch Pine rather than Red Pine. Both share similar bark, but the former has three long needles, while the latter sports two. The correct coupon in hand, we continued on our way.

Red-belted Polypores pulled us from the main aisle to admire their construction. Talk about an exclusive offer–woohoo! 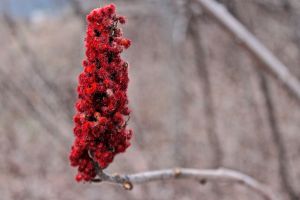 And we couldn’t resist the raspberry red pyramid of the Staghorn Sumac. A taste of Sumac Lemonade danced in our heads while we continued shopping.

About a year ago, I’d told J.M. about a salmony hue in the winterscape. As we came upon this item, she understood what I meant about the color. And I was thrilled to discover that they had plenty in stock–I had no idea that White Oak grows in Fryeburg. I’m slowly adding towns to my list–where it grows and where it doesn’t grow. 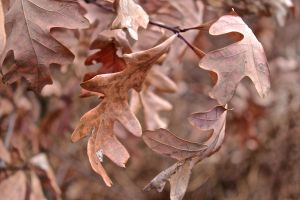 The free-form structure spoke of a dance performance. And then we realized that we were in a wind tunnel. Even though it wasn’t windy at the moment, the marcescent leaves have retained their fluid shape.

We also found variations of red in Bush-Clover, which is a typical species of this place, though we didn’t realize that at the time.

From the Bush-Clover, it was an easy transition into the texture department where more bargains awaited. 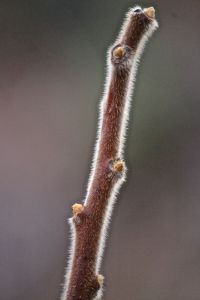 The velvety feel of the Staghorn Sumac warranted a caress. Having grown up with Poison Sumac, it always strikes me as odd to be so enamored with a member of this family. But I am.

We stepped into the next aisle and found these corn-dogs on a stick. Cattails get their common name from their end-of-season fluffy spikes or tails. Need insulation or mattress stuffing? Check out aisle 6. From food to shaving cream to antifreeze, this is a bargain you don’t want to dismiss.

There’s even a two-for-one sale. 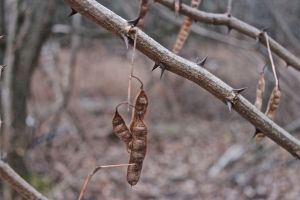 In contrast, though graceful in appearance when leafed out, the formidable thorns of a locust tree seem to serve as a warning sign–hands off the seed pods. Not exactly what I’d call a sweet deal.

Impulse items drew our attention as well–those things we didn’t need but couldn’t resist. The spiraling of the Evening Primrose seed heads and 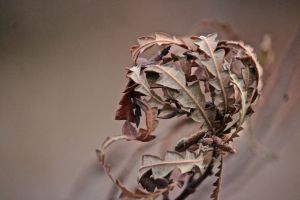 the curling leaves of the Sweet-Fern’s leaves begged to be noticed.

The light was starting to wan as we made our final purchases before heading home.

Our shopping trip along the Mountain Division Trail, a 4-mile long section of the rail trail in Fryeburg, had come to an end. But we were guaranteed free shipping for those purchases we couldn’t cart home.

J.M. and I bagged some exclusive specials as we hand picked the near endless stream of deals and discounts on this Black Friday. We knew we’d come to the right place . . . to practice our shopping expertise.

4 thoughts on “Black Friday My Way”