As I headed into my smiling place today, I was certain that I wouldn’t find anything of interest. But this Sunday wander made me realize that the gift of wondering means being open to surprises.

I began my traipse following one of the more recent logging trails where sliding over slash is the name of the game.

I can’t wait for three feet of snow to make this an easier adventure. In the meantime, I made do.

Some moments I did think I was sinking to China–where my friend Judy Lynne would have to be on the lookout for me.

And then pumpkin orange polypores called out, proving slash is good for something. Cinnabar-red Polypore (Pycnoporus cinnabarinus) I do believe. It pays to have Fascinating Fungi by Lawrence Millman in my pack.

As is its habit, it was growing on a downed cherry log. I picked one fruit to show the pore surface beside the cap. Millman describes it this way: “Caps are kidney-shaped orange to dull reddish-orange, azonate and covered with warts and wrinkles in age. The pore surface, in the words of mycologist Gary Lincoff, ‘looks as if it had been seared by a hot iron.’ The pores themselves are usually more angular than round.” I had to look up azonate when I got home: without zones or circular bands.

Cinnamon fern grew abundantly in this boggy land and as usual, I was drawn to the drama it provides in death.

Most of the pinnae or leaflets have fallen to the ground, where their curved forms add texture and interest even as they begin to break down and give back. 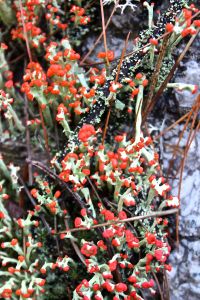 Watching over all–a large colony of British soldiers, their red caps ever so bright in this miniature world.

I reached the main logging road at last. A few weeks ago I thought that the logger had finished his mission, but apparently not. That’s okay, because after I found a bunch of bobcat, coyote and deer prints, I headed back into the woods leaving the muck behind.

Bunches of white pine needles adorn many of the young hemlock trees–all in keeping with the season.

And the hair cap moss speaks of starry, starry nights and geometric designs.

But my best find of all was a total surprise. In fact, I didn’t think it was natural at first. An old baseball or tennis ball that somehow landed in this place where few venture? I touched it and it felt almost leathery. Inside, the duff was powdery. Time to turn to Millman again. I think my ID is correct: Pigskin Poison Puffball aka Earthball (Scleroderma citrinum). WOW! Look at that warty surface. And it was huge compared to other puffballs. My heart was singing. (Fortunately I kept the song in my heart though I was in a place where no one would have heard me!)

Eventually I made my way back to the snowmobile trail where I continued to wander for a while. Wintergreen is the plant of choice for this stump garden.

Bracken ferns have turned from green to a light bronze patina. Most have fallen or been knocked over. This one especially appealed to me because it has retained its structure and even portrayed an uplifting spirit.

The past few days have been delightfully, though unusually, warm, but I found some ice. And even an ice ghost.

From ghosts to witches–in the woods, I never know who I’ll happen upon. Witch’s Butter (Tremella mesenterica) is another that stands out amongst the grays and browns of the December landscape. 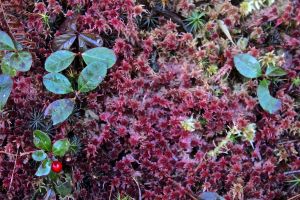 Not all is gray and brown. As I wait for snow, the colors of the season remind me that without its covering, there’s much to enjoy. 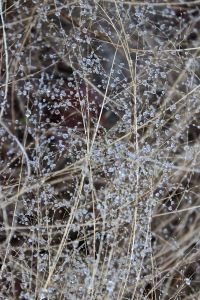 I was about to head down the grassy path that leads to our cowpath, when two things gave me pause. First, the droplets of water that adorned the grass.

And second–this gall on a meadowsweet plant. I’ve passed it numerous times and decided today was the day to try to figure it out. If my guess is wrong, please feel free to correct me. I think this is rose bedeguar gall, aka Robin’s pincushion gall. Meadowsweet is a member of the rose family, so maybe I’m right. Then again . . . 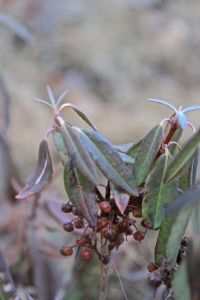 One last find that I always enjoy looking at–the fruits of sheep laurel extending  below the leaves and reminding me of jingle bells.

At last I was home again, thankful for a Sunday wander wonder-filled with surprises.