Our first Mondate of 2016 had us swerving this way and that and never quite reaching the summit. Such is the way of life–and our best choice is to go with the flow.

We drove to Hurricane Mountain Road in North Conway to begin our trek up the obscure Red Tail Trail. Well, it’s not really obscure. Mountain bikers know it well. And at least a half mile of the trail is part of the Cranmore Conservation Easement held by the Upper Saco Valley Land Trust. I’m going to lead a hike for them in a couple of weeks, so I dragged my guy along for a reconnaissance mission.

And we got lost. Fake lost once again. This time, the wrong trail–the Kettle Ridge trail, which isn’t signed. That was my first clue. The second was that we were immediately climbing and I couldn’t hear water. I’ve only explored part of the Red Tail Trail once before with Jesse from Upper Saco Valley LT so I knew it followed the brook beside Hurricane Mtn Road from the start. After about fifteen minutes of climbing and not feeling like it was right, we retraced our steps and I found the trail sign I’d been looking for–hidden behind some trees. Lesson to those who follow me–you never know if I’m leading you astray 😉 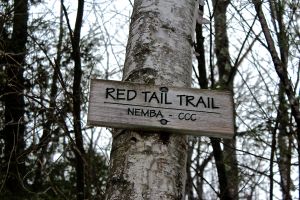 Two signs actually within a matter of minutes and we were golden.

For about a half mile the trail follows a nameless brook. It must have a name, but I can’t find it anywhere so I’m calling it Red Tail Brook. I was looking for interesting things to share with people and as usual, nature didn’t let me down. 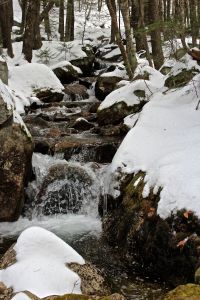 Water created icy legs as it cascaded over the rocks. 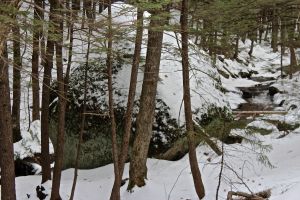 Speaking of rocks, I can’t begin to imagine the moment that this boulder landed beside the brook. It must have created quite a roar and thud. If a boulder rolls in the woods and no one is around to hear it . . .

My guy begrudgingly posed beside it.

And Red Tail Brook flowed behind. 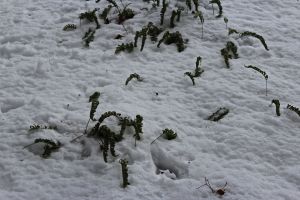 Atop the boulder, polypody ferns let us know that the temperature was in the teens. Fortunately, we were out of the wind as we were on the backside of Mount Cranmore.

Life on a rock! Life rocks. And this rock is full of life. 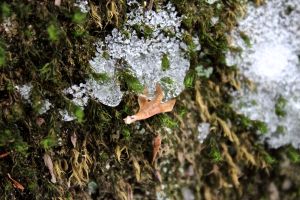 One itty bitty piece of life clung precariously with hopes of taking hold on a permanent basis. I’m not sure this boulder is the right choice, but a yellow birch scale clings tentatively.

Yellow birches need moist conditions to germinate and grow. Moss-covered conifer logs and stumps, along with rocks offer the best chance for survival. 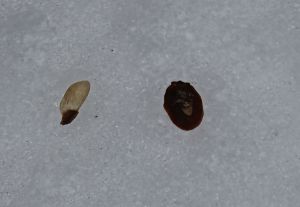 We were in Eastern hemlock territory so hemlock cones, seeds and scales were also abundant.

As were red squirrel middens.

It may be a single track bicycle trail, but it’s not a single turkey trail. Their oversize prints covered the lower part of the range. 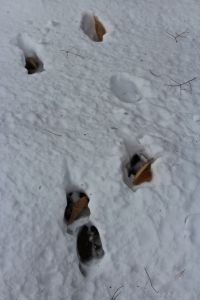 From top to bottom, deer prints crisscrossed the trail. 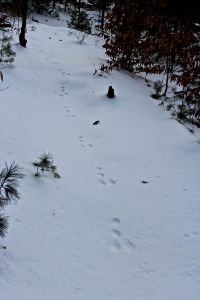 We also saw plenty of snowshoe hare tracks. Though my guy claims he saw an actual hare, I can at least say that I knew by the signs left behind that they’d been active.

Prints below a 45% cut on a shrub and plenty of milk duds–aka snowshoe hare scat–were evident everywhere we turned. 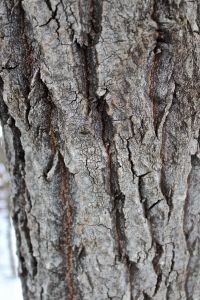 My bark addiction is not to be denied. A wee bit of light brown between furrows makes me think I’m looking at Northern red oak, until I recognize the flattened ridges and gnarly furrows and realize I’m starring at a big tooth aspen tree. Of course, its leaves with those well-cut teeth and flattened stems serve as a banner. 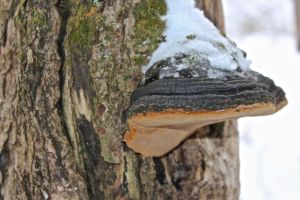 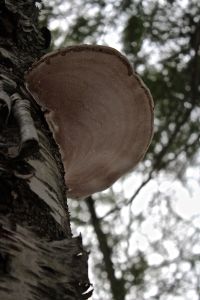 After lunch (PB&J, some yummy chocolate raspberry bars my sister made and hot cocoa), we left the brook behind and began to ascend the mountain via a number of switchbacks. My guy, of course, was always ahead as he appears here–disappearing into the trees. 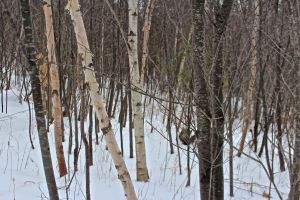 The community kept changing–sometimes we were in a recently logged area where paper birch, gray birch and cherry trees dominated the landscape. 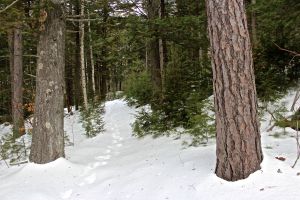 Other times it was a mix of evergreens, including white and red pine, hemlocks, firs and spruce trees. 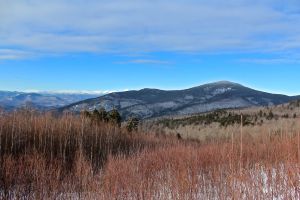 And then the S-turns got serious–one curve after another. The higher we climbed, the more we realized that there were a lot of false summits before us, but a glorious view behind us. 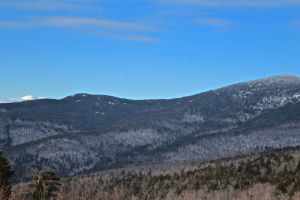 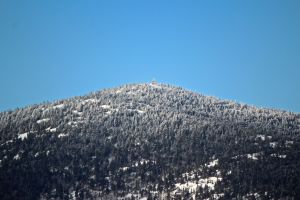 With my telephoto lens, I pulled in the  Mount Washington Observatory and fire tower atop Kearsarge.

The Mount Washington Valley spread out below us. We felt like we were so close to the connecting trail between Mount Cranmore and Black Cap Mountain, but the sun lowered and we’d left our headlamps behind. Every time we thought surely the next turn would be the summit, we were wrong. So . . . rather than worrying about reaching that destination, we decided to turn around and head back down the trail. At first, we bushwhacked together and then it became a game. We took turns as one of us bushwhacked while the other followed the trail, curious to see where we would meet. Competition took over, and we were soon running to beat the other to our meeting spot–wherever that may be. Somehow, what took us a while to climb up turned into only an hour’s journey down.

I, of course, got off track a couple of times and had to yell to my guy to figure out his location. He had the last chuckle when I chose a wet spot for my final shortcut-turned-longcut.

At last we reached the trailhead, tired but exhilerated. On this Mondate we went with the flow and loved the opportunity to learn and play together along the way.

4 thoughts on “Going With The Flow Mondate”