It was chilly this morning. Understatement. It was mighty cold, given the wind. But that didn’t stop the intrepid Tuesday Trackers of the Greater Lovell Land Trust from exploring a property under conservation easement. For some though, that was enough. A few of us had intended to explore a trail in Stoneham, but postponed that trip for another day. The temperature was dropping as the wind increased.

My brain and body, however, were still in exploration mode, so I drove to the Heald/Bradley Ponds Reserve. A sip of hot cocoa and I was ready to continue.

Mill Brook takes on a different look in its winter coat.

Below the tree that lays across the stream, a series of twists remind me of flames–frozen in time. 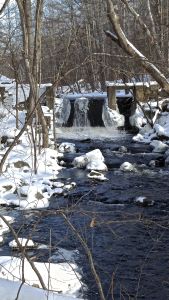 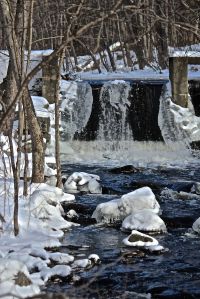 As the water cascades over the old dam site, the ice builds up, creating a new scene moment by moment. 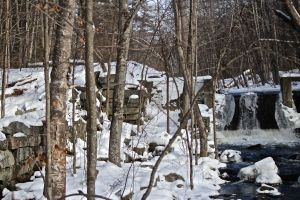 I love the combination of newer dam beside the old foundation stones. History was made here.

And above those very rocks a sight that warmed my heart–an otter had been chillin’. In my next life please let me be an otter. I know they are fierce predators, but they seem to have such fun and they LOVE winter. Me too. 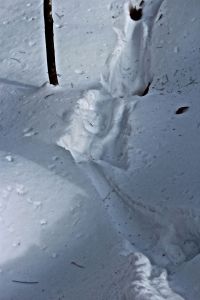 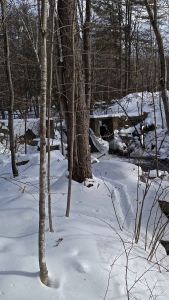 and another downward slide

back to the water. Check out those webbed tracks on the angle noted for members of the mustelid family.

A mink had also passed through. Oh my! I could have turned around then and headed home, but I didn’t. 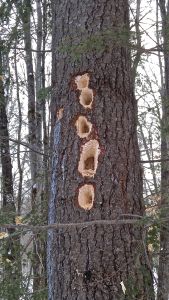 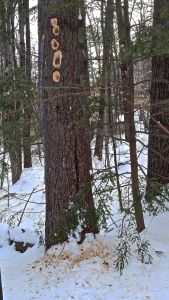 Near the kiosk, a pileated woodpecker has been enjoying a feast. I found scat among the wood chips below. If you go, look for it–filled with carpenter ant bodies.

Despite hand warmers, my fingers were feeling the cold, so I bee-lined to Otter Point. Whenever here, I feel compelled to check on the dragonfly exoskeletons.

No otter tracks at the point, but there was plenty to capture my attention including ice coating a witch hazel leaf. The contrasting yet complimentary patterns and color demanded a closer look. 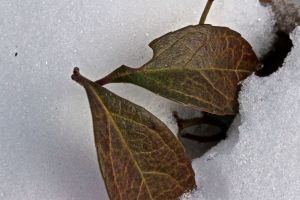 A few wintergreen leaves featuring their winter hue poked above the snow.

As I started back on the trail, the wind made my eyes water and burned my cheeks. It provided a good excuse to turn onto the blue loop and climb toward the summit of Whiting Hill, all the while warming me. And so did this red oak leaf.

Nearby, a faded beech leaf. Take another look at the witch hazel, wintergreen and oak–notice their veins. Compare them to the beech. So many differences for something we might simply call a leaf.

At the summit, the sky and mountains offered a dramatic view. Winter blues dominated the scene. Happy blues. 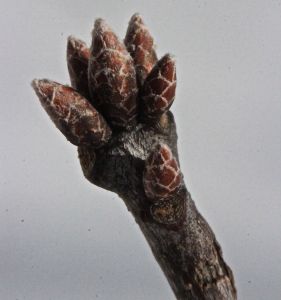 As I enjoyed the sun’s warmth, I focused in on my nearby surroundings. I wasn’t the only one appreciating extra layers today–the crowned formation of Northern red oak buds don their own warm and fuzzy coats.

An aster waits patiently–huddling yet ever ready to go forth and multiply. 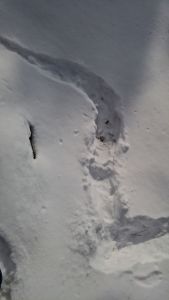 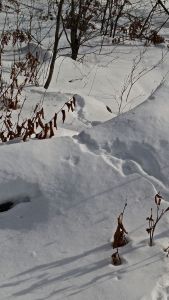 And then I saw this. Another slide? No–actually, it’s a tunnel of sorts created by a ruffed grouse. The middle photo shows the bird’s scat. The bird plowed through the fluffy snow as it fed at the summit.

Everywhere I snowshoed (the zip ties work so far as they hold my snowshoe strap together), there were mouse tracks–the risky business critters of the world. 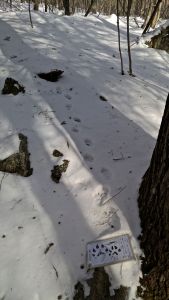 I’d seen fisher tracks crisscrossing my trail as I climbed toward the summit. And then on the way down, not much of anything except mice . . . until these tracks below a hemlock. We had light snow yesterday that has filled in many tracks, but these were quite clear–making them easy to ID. 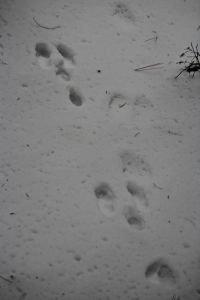 As the trail turned sharply left, I entered the home territory of another mammal. Within these tracks I always see the winter lobster. 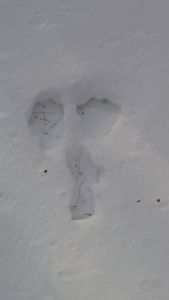 A snowshoe hare–its smaller front feet land first–one before the other and often at an angle. Then the larger hind feet swing around and make a deeper impression as the hare pushes off in a bound toward its next landing spot. 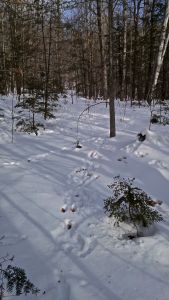 I felt like I was at the scene of a hare convention.

And no convention is complete without some scat. Take a look at the vegetative substance of these milk duds.

This morning we were talking about the fact that we’re seeing many more tracks right now than is normal for January. We think it’s the snow cover–easy enough for them to move around. And it’s been warmer, though you couldn’t prove that today.

As I headed toward the parking lot, the milkweeds that grow at a former homesite across the road called to me. Their parachutes were in constant motion in the wind, but still they clung on to the pod.

I couldn’t feel my toes, so I didn’t have to worry about them. 😉 But my fingers didn’t appreciate it when I took my mittens off for a photo call. Despite that, I’m so glad I spent the afternoon chillin’ at Heald Pond.

4 thoughts on “Chillin’ at Heald Pond”