The other day a friend handed me a piece of paper and told me to read it later. We were about to go tracking, so I stuck it into my pack and forgot about it. This afternoon, as I prepared for a hike up Mount Tom in Fryeburg, I found the paper.

I’d originally thought it was an article, but instead, it’s a quote from the October 1967 issue of Yankee. A friend had given it to him and he passed it on to me: “We hunt as much for the memories as for the birds. For the memories, and for the hours afield in the autumn woods where a man can get back, for a while, to remembered realities, to a time and a way of life close to the eternities of the land. It’s hard to explain this to the outlander who never knew such things. He thinks of it as an escape. To us it is more like a homecoming. We live here, of course, but only in the leisure after we’ve done the stint at our jobs do we go out on the hills and up the brooks. There we find the truth of our world, even the truth of ourselves.” ~author unknown.

I reflected upon those words as I slipped into my snowshoes at the trail head. I’d made a decision to end one of my freelance writing/editing jobs this week (not Lake Living, which is my all time favorite writing job. Hard to believe the spring issue will mark my tenth anniversary!) and declutter my world. 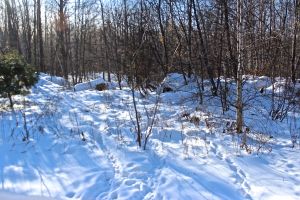 It will never happen, but certainly the porcupines that inhabit this mountain should consider the same. 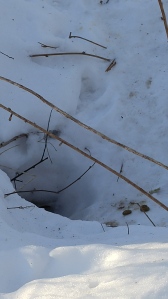 I had a hunch I’d see evidence of their existence once I got up into the hemlock neighborhood, but a small stump dump early on provided ample den space. 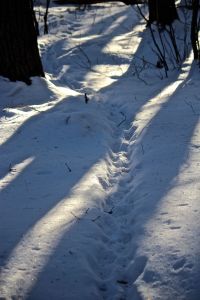 I didn’t even realize as I climbed toward the summit that I wasn’t taking too many photos. Instead, I was cued into the tracks left behind by two people who had traveled this way before me and the porcupines, deer, hare, coyote, bobcats and little brown things. While the people stuck to the trail, I wandered this way and that as I tried to decipher what I saw–my own zig zag trail reminiscent of those I followed.

I didn’t get lost today, though truly, when I do get fake lost, it’s a time to understand myself better– listening to my inner self sort things out. Most of today’s trail is an old logging road. And most of what I saw was familiar. Perhaps that’s what it’s all about–knowing a place so no matter where you are, you recognize it.

The community changes abruptly from birch, beech and maple saplings to hemlocks and pines. I, too, can change abruptly and have a tendency to be blunt. I don’t see that as a bad thing, though occasionally I do regret what I’ve said.

And then I began to look up and notice other parts of my surroundings like these old deer or moose scrapes on striped maples. Forever scared, they provided nourishment in the past–and may do so in the future when the time is right.

One striped maple still sported a few seeds that have yet to go forth in the world. What’s holding them back? Don’t they know the time has come to let go?

Amongst the evergreens  a paper birch offered a twist on life. I believe this is the result of sun scald–the heating and freezing of thin bark. Typically, the white reflective bark helps the tree avoid such danger–but something obviously happened to cause this candycane-like stripe.. 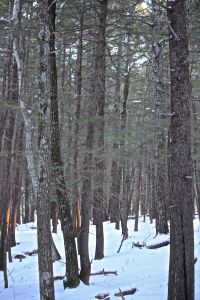 Though it was getting late in the day, rays of sunshine illuminated the darker side of things.

As I followed more porcupine tracks at the summit, a dried leaf captured my attention. In my ongoing attempt to draw an imaginary line showing the boundary of white oak, I added another dot. 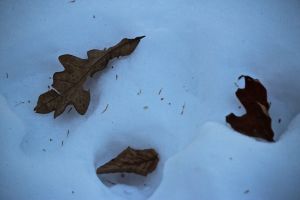 Nestled within animal tracks, three leaves told me more about the members of this neighborhood–white oak, beech and Northern red oak. 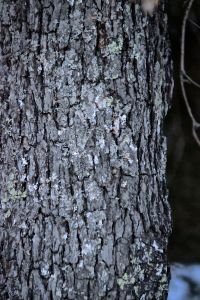 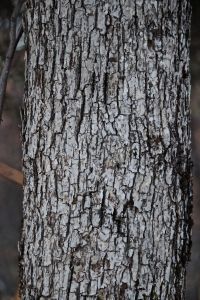 So then I searched for the white oak trees–and found them. My bark eyes still don’t cue into this one immediately and I need to learn its idiosyncrasies, including its ashy gray color and blocky presentation.

I discovered a snow-covered nest that made me ask–bird-made or human-made? It’s constructed of reindeer lichen and sits upon a base of sticks about four feet up in a scrubby old oak. I was as excited by the find as I was by my wonder and lack of an answer. What fun would it be to know everything? 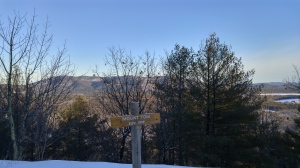 From the summit, I could see Pleasant Mountain’s ridge–giving me another sense of home. The view isn’t spectacular, but that isn’t the point.

Heading down, a second old favorite came into view–Kearsarge North. I stopped frequently as I descended–to listen and watch. And smell. Twice, a strong cat-like pee odor tickled my nose. The tracks were there, but I couldn’t find any other bobcat evidence. One of these days. 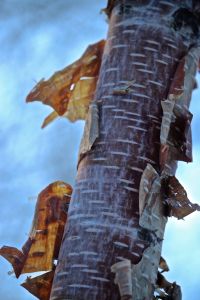 A rainbow of color presented itself among the paper birch trees–such variation for what is commonly called white birch.

Near the bottom, the Mt Tom cabin speaks to an earlier time when living off this land was the norm. Though I like to think that I could stay here by myself for a week, I’m not so sure. Of course, that would force the issue and surely the truth about myself would be revealed. Maybe it’s best left a mystery. 😉 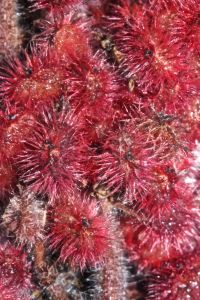 Before slipping out of my snowshoes, I paused beside the staghorn sumac. It was my height, so I had an opportunity to examine its hairy features closely. Animal from The Muppets must have cloned himself. 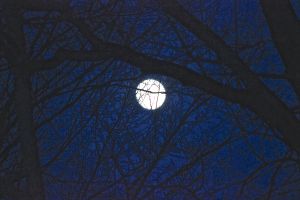 There was a time when I was easily unnerved being in the woods alone. And I still have moments–especially when a ruffed grouse erupts. Geesh–that can certainly make my heart sound like it’s going to jump out of my body. But, the more time I spend out there, the more time I want to spend out there–exploring, discovering, wondering. This afternoon, I finally followed the full moon home, thankful to find even an inkling of my spirit. I recognize that the word “home” has come to mean more than one place. Our abode is our home, but time in the woods is also a homecoming.

6 thoughts on “The Homecoming”