While our thoughts were (and are) with our family and friends south of us along the Eastern Seaboard as you deal with a major winter storm, my guy and I drove over to Evans Notch for a hike around Shell Pond. 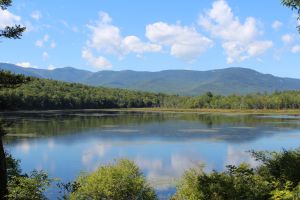 Whether you’ve traveled this way before or not–a summer photo might be just the dose you need today.

We parked near the trailhead for the Leach Link Trail because Stone House Road is never plowed beyond that point. Others had skied, walked and snowmobiled before us, but no one seemed to be snowshoeing so we left ours behind. As it turns out, that decision was fine. We dug some post holes in a few drifts, but other than that, we really didn’t need them. I did, however, use micro-spikes–and am glad because it’s a rather wet trail and we encountered lots of ice, much of it just a few inches below the snow.

Thanks to the owners of the Stone House for putting much of the land under conservation easement with the Greater Lovell Land Trust and for allowing all of us to travel the trails–whether around the pond or up Blueberry Mountain and beyond.

Before the airfield, we turned onto the Shell Pond Loop trail. It’s blazed in yellow and easy to follow. Some trees have come down, but we got over or around them. We took care of a few today and the rest will be cleared by summer. 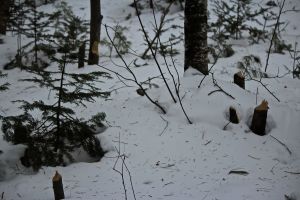 Of course, some trees were intentionally harvested. We found these beaver works near the beginning of the trail where the brook opens into a small wetland. 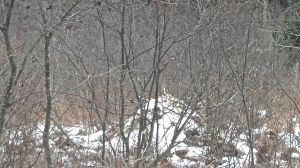 On top of the lodge, you might be able to see the lighter color of fresh additions to the structure. This was the first of three.

Lodge number 2 is toward the far side of the pond. 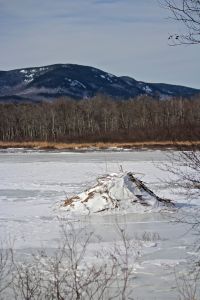 But it’s lodge number 3 that I’d stay at. It’s worth a payment of a few extra saplings to get a room with that view.

The beavers aren’t the only one making changes in the landscape. Pileated woodpeckers in search of food do some amazingly shaggy work on old snags. 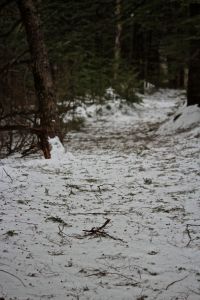 Winter debris covers much of the trail. Strong winds have brought much of this down.

And two of the most prominent trees make themselves known among the debris. A hemlock samara beside a yellow birch fleur de lis and a hemlock needle atop a more complete fleur de lis flower of the birch. 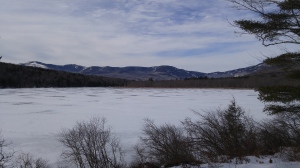 Shell Pond takes on an entirely different look in the winter. We could hear the ice whales singing as we ate our PB&J sandwiches and sipped hot cocoa. 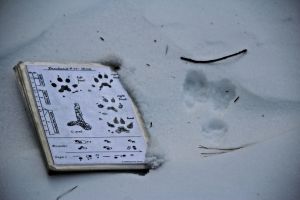 While we ate, we noticed a mink had bounded through previously. I’m always thankful to have David Brown’s Trackards in my pack.

Continuing on the trail found us taking in views of the cliffs, which we don’t normally see so well once the trees leaf out. 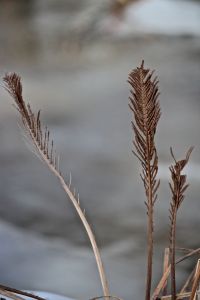 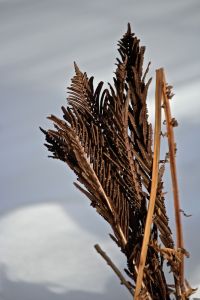 Before continuing through the orchard, I wandered closer to the brook in search of this–the fertile fronds of the ostrich fern that give it its common name because they resemble plume-like ostrich feathers. Come spring they’ll release their spores. 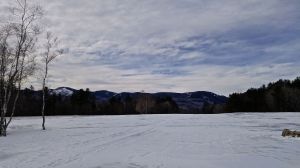 The sun tried to poke out as we crossed the wind-blown airfield.

From the field, we always admire the Stone House and its setting below Blueberry Mountain.

Walking back on the road, we spotted a classic snowshoe hare print. Most of the tracks we saw were filled in by blowing snow, but these were textbook perfect. 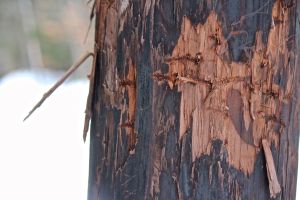 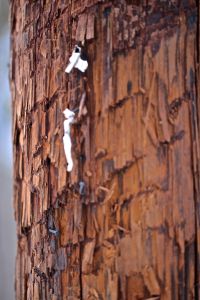 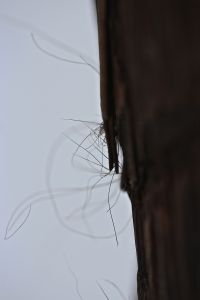 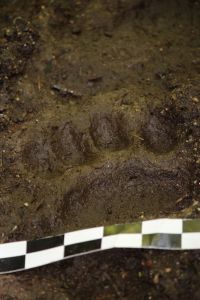 I took this photo on the Shell Pond Loop trail a year and a half ago. Oh my.

Those of you who have traveled this way with me before will be amazed to know that we finished today’s trek in just over three hours, even with the added walk down Stone House Road. Yup, not an advertised three hour tour that turns into six. Hmmm . . . Apparently it can be done–I just need to get Mr. Destinationitis to join our treks for a Shell Pond Speed Date.