Support comes in many manners and I can’t help but think that many of us would probably benefit from having more than two legs to stand on. But then again, we have family and friends to lean on and serve as our third leg of the stool.

It’s the same in nature, where three-legged stools don’t necessarily resemble seats at all. Take for instance the tree lungwort (Lobaria pulmonaria). A friend and I stumbled across this leaf-like lichen as we tramped up and down several ridges today.

When it’s wet, the upper side turns bright green while the underside is creamy white. Today we found some that ranged from aqua to olive in color.

The thallus or body is easily distinguished by its lobed form. The ridged and pitted surface is said to resemble lung tissue–thus the common name. During the Renaissance era, when the physical form of a plant was thought to determine its use, tree lungwort’s similarity to the structure of a lung led to the belief that it healed respiratory problems.

So here’s the thing. Typically, lichens consist of two partners who benefit from the presence of each other–one being fungal and the second being an algal partner. (You may have heard the old line that Freddy Fungi and Alice Algae took a liken to each other and live symbiotically ever after). For the tree lungwort, the fungus provides the rigid structure and anchorage. Simultaneously, the algae gives it the ability to gain energy from the sun–think photosynthesis.

But . . . there’s a third partner or leg of the stool for tree lungwort–the fungus and algae live in a relationship with a blue-green cyanobacteria that helps the lichen gain energy from the sun, but also absorbs and fixes nitrogen from the atmosphere. When thalli eventually fall off trees, the decomposing lungwort adds nitrogen to the forest floor.

While this leafy growth uses the tree as support, it doesn’t take any nutrients from its host, making it an epiphyte. In our area, moose are said to feed on it. And natural dyes may be made of it. 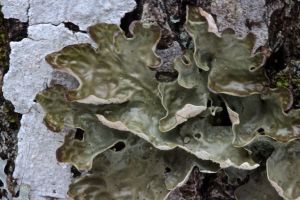 Its leaf-like structure provides an example of a foliose (think foliage) lichen.

There are two other forms of lichen. Common button lichen with its thin gray surface or thallus and flat, black disks is an example of a crustose lichen (think crust of bread).

Beard lichen is a fruticose (think fruit–branching structure like grape branches). I don’t know about you, but mnemonic devices help this old brain.

As is our habit, we paused often to take a closer look–at the vascular system of a decaying beech leaf resembling a stained-glass window; 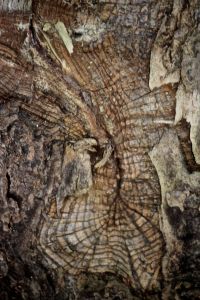 The rings of life healing a hemlock wound; 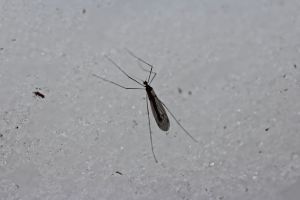 A pyrola peeking out from the snow;

And a speckled alder catkin preparing for its spring fling.

We shared three hours and three miles plus our knowledge, wonder and support–performing as the third leg of the stool for each other.