My ability to look into a crystal ball and predict the future is non-existent–especially when it comes to the natural world. 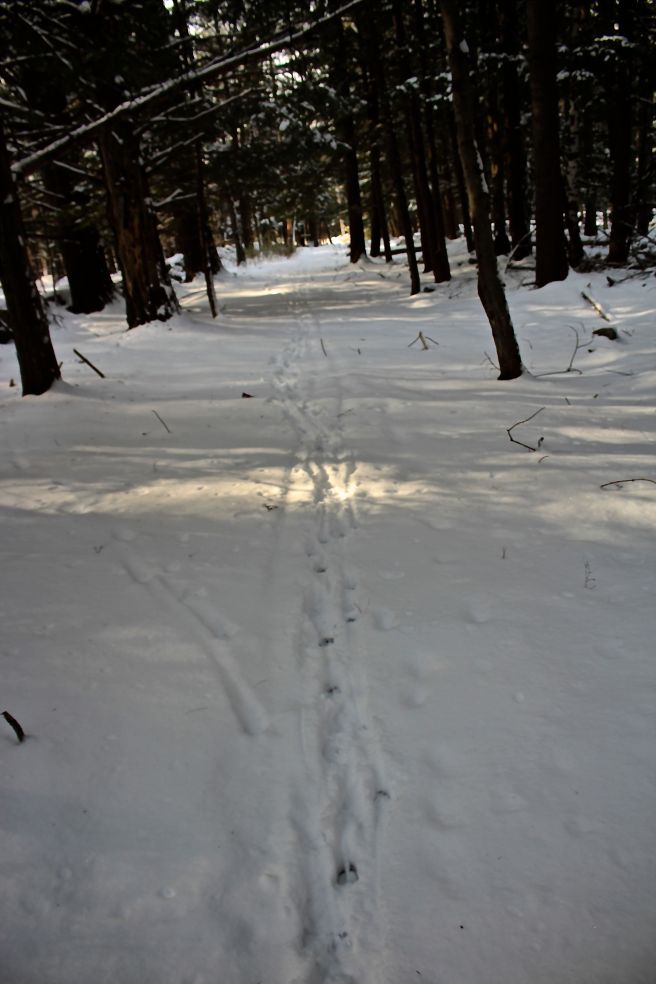 And today was a perfect example. I headed out along the cow path following the deer who had traveled this way during the night. 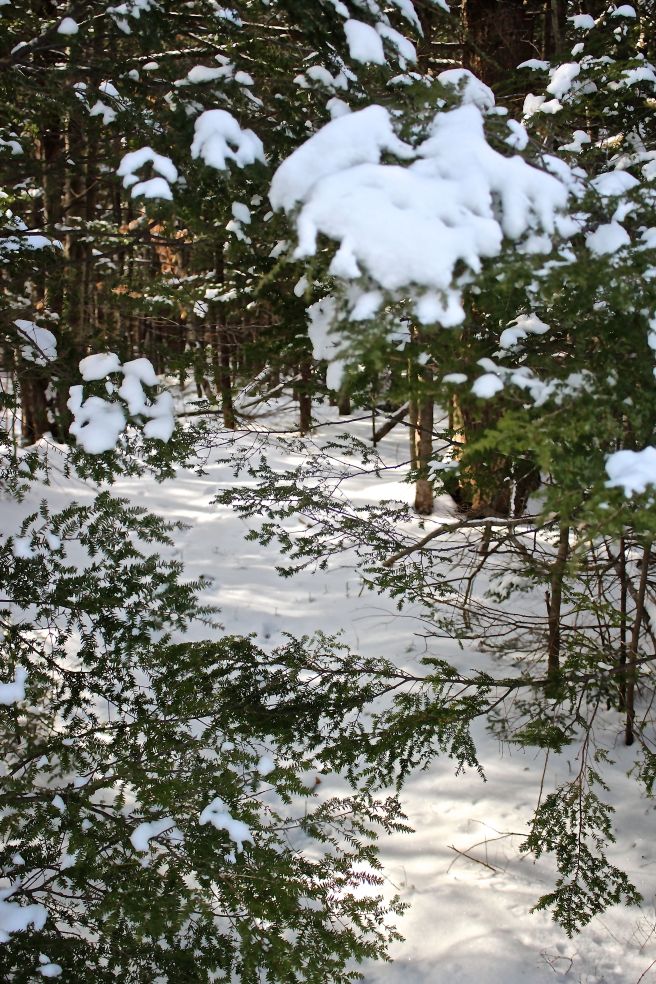 They know the entry gate to my secret hiding place and don’t hesitate to pass through. I thought for sure that this would be the day I’d see them again. It’s been a couple of weeks and usually they are too fast for me to capture in a photo. 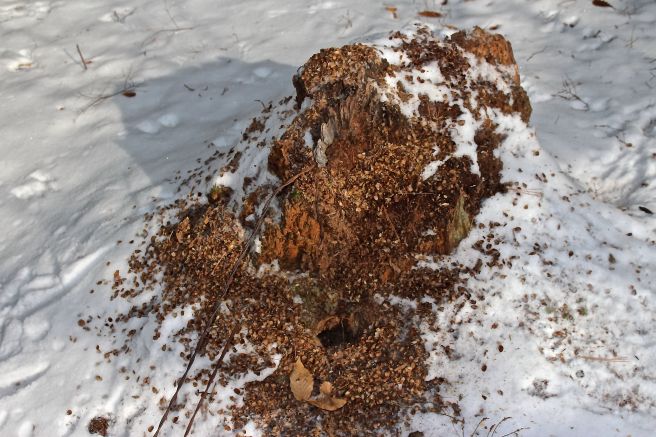 And when I located this red squirrel castle, I was sure I’d see one about. Its tracks showed equally abundant movement and this stump is obviously a place where it enjoys dining, but . . . all was quiet on the squirrel front as well. 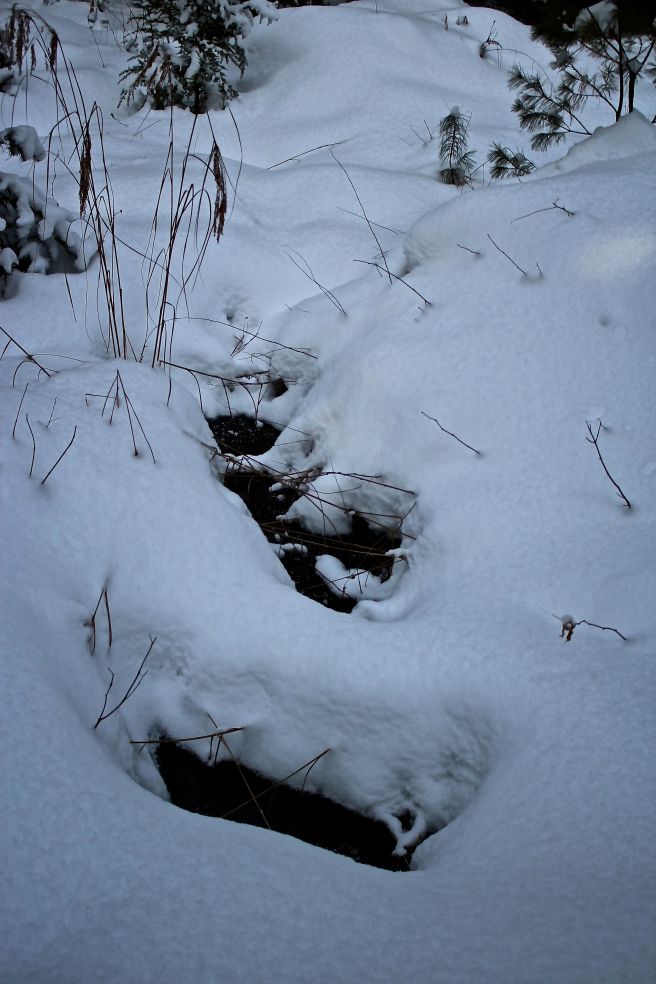 So, I continued on, ever mindful of the water hazards. 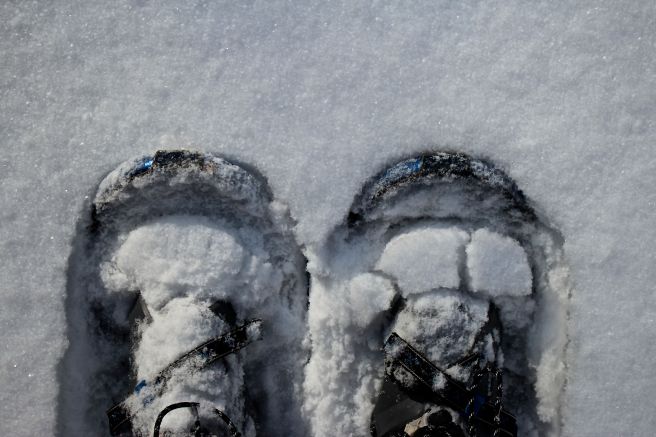 The snow is slowly piling up and after stumbling about yesterday, I donned my  old snowshoes today–traveling was much easier. 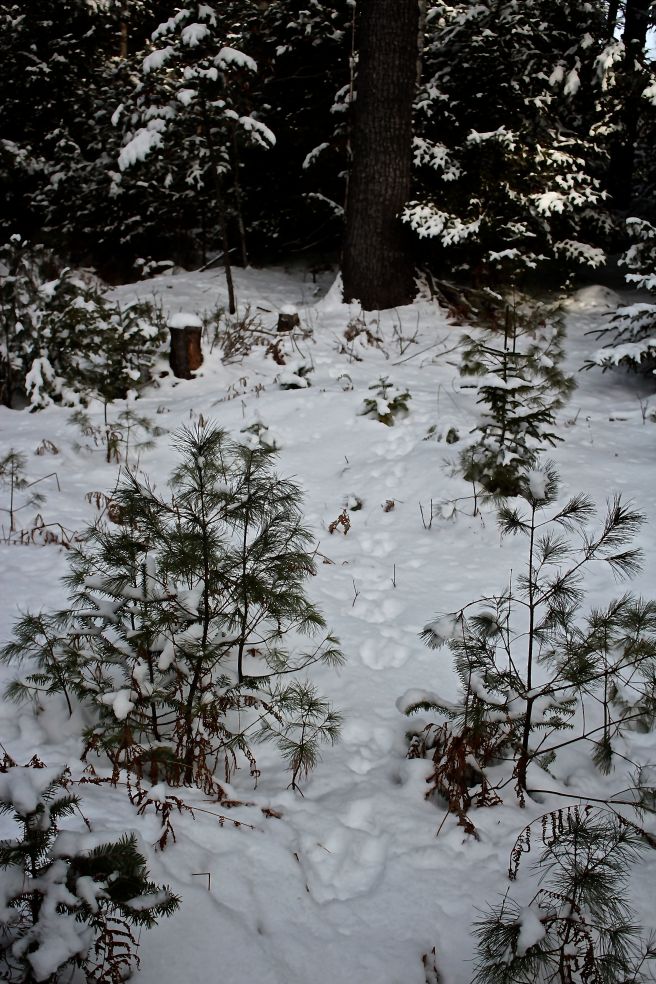 My crystal ball told me that if I sat quietly for a while I just might be rewarded with the sight of another type of snowshoe–a hare. 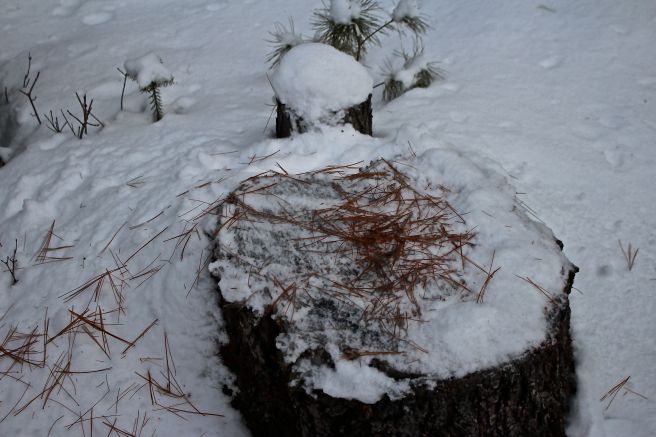 I found a stump and cleared it off before plunking myself down. 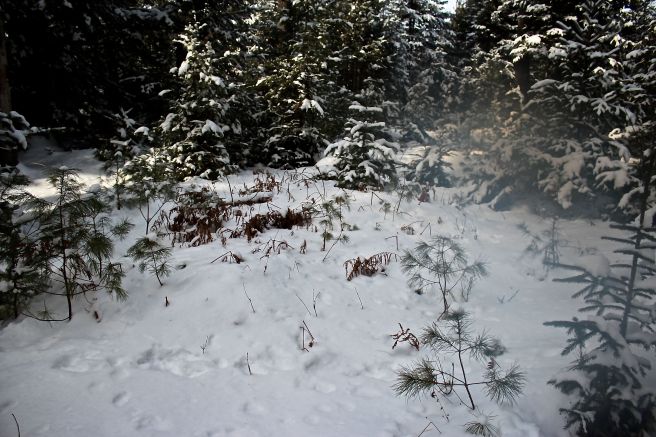 And I waited–ever sorta patiently. As sunlight hit the upper branches of the evergreens, snow dust floated down upon me. And snow plops landed all around–adding confusion to the prints before me. Still I waited. 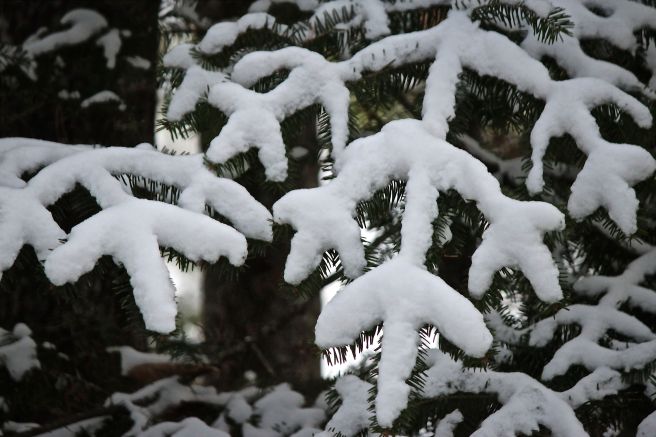 While I waited, I noticed dozens of turkey prints–balsam fir style. 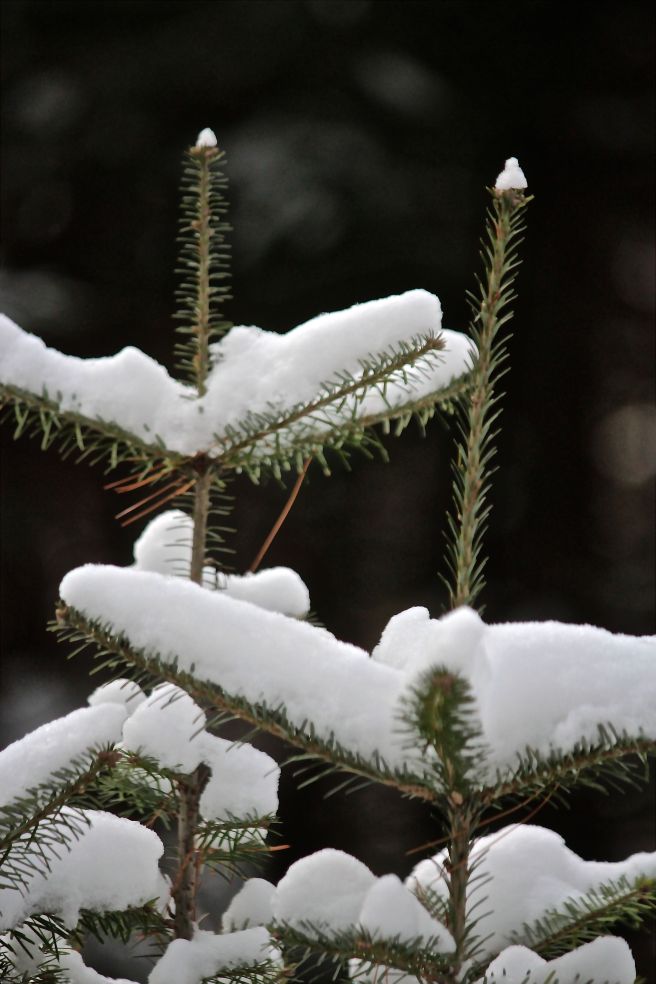 There were balsams with snowy tips. 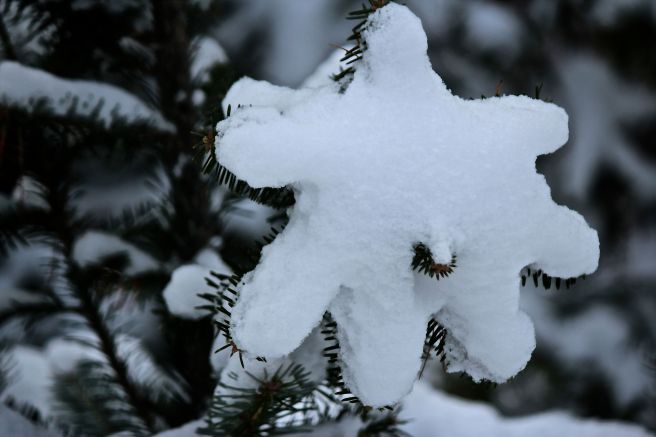 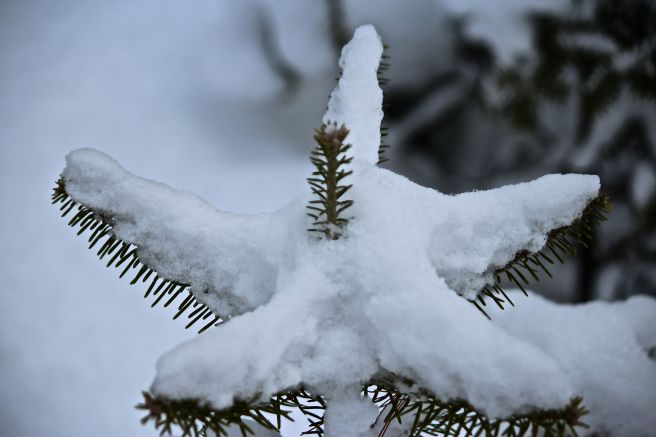 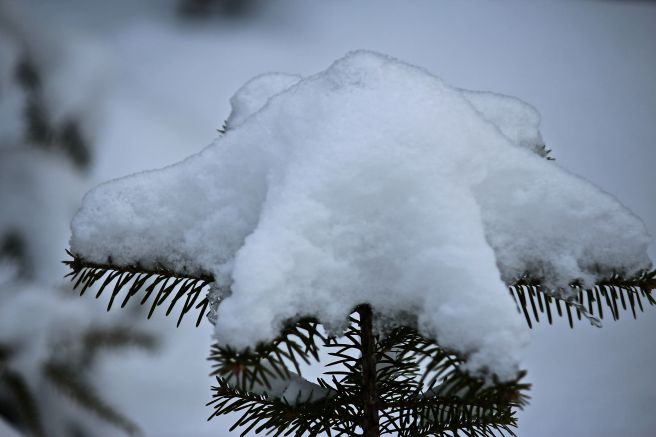 And even a balsam octopus–minus a leg or two. 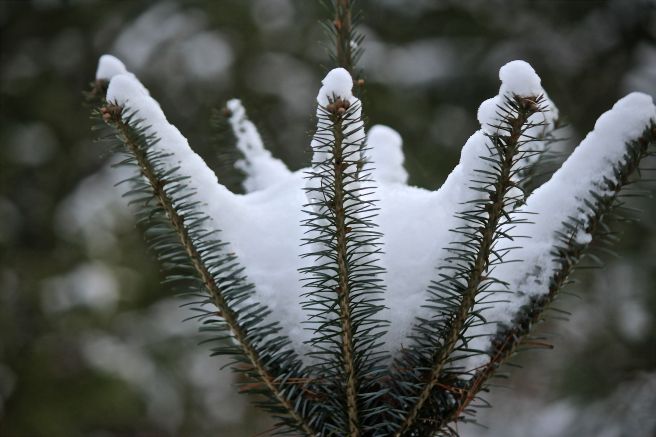 Maybe my problem was that my crystal ball was made of ice crystals sitting in a balsam cup. Or maybe it was that I kept snapping the camera. I tried to sit still and take in the moments, but . . . my bum got cold and I needed to move on. I’ll save my snowshoe hare siting for another day–as if I have a choice. 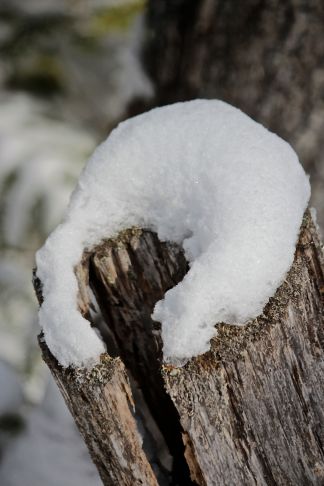 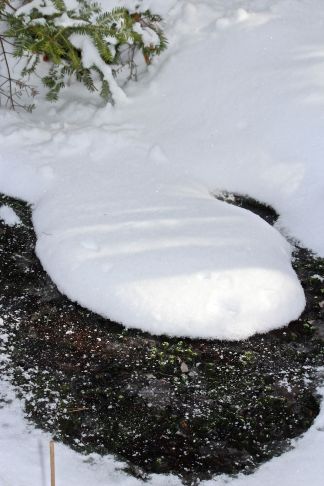 I wandered some more and came across two sights I don’t usually see in these woods–rather than snowshoes, I found horseshoes. 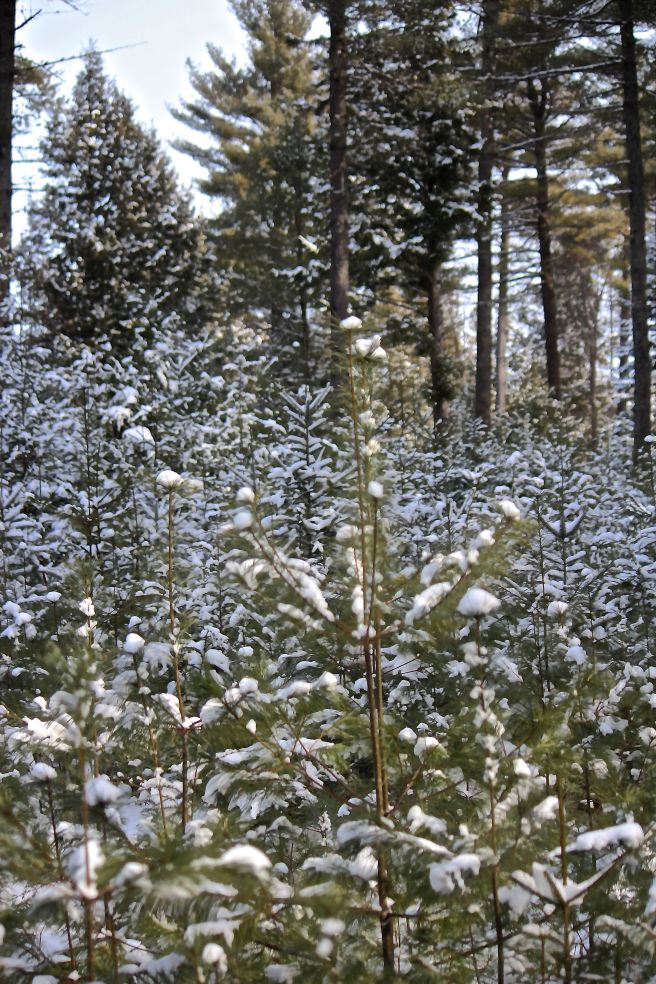 And then I moved out of the land of the white evergreens. 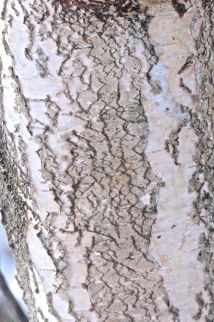 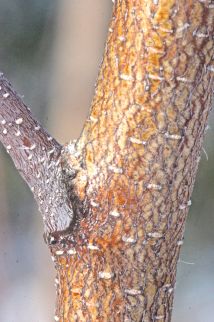 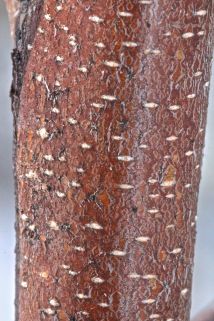 And into the land of early succession, where gray birch and red maple dominate the community. To the gray birch I turned–taking in the orangeyellowburgundybrownpinktanwhite with a dash of gray bark of immature trees. And the squiggly vertical lines intercepted by the raised horizontal lenticels that allow these trees to breath. 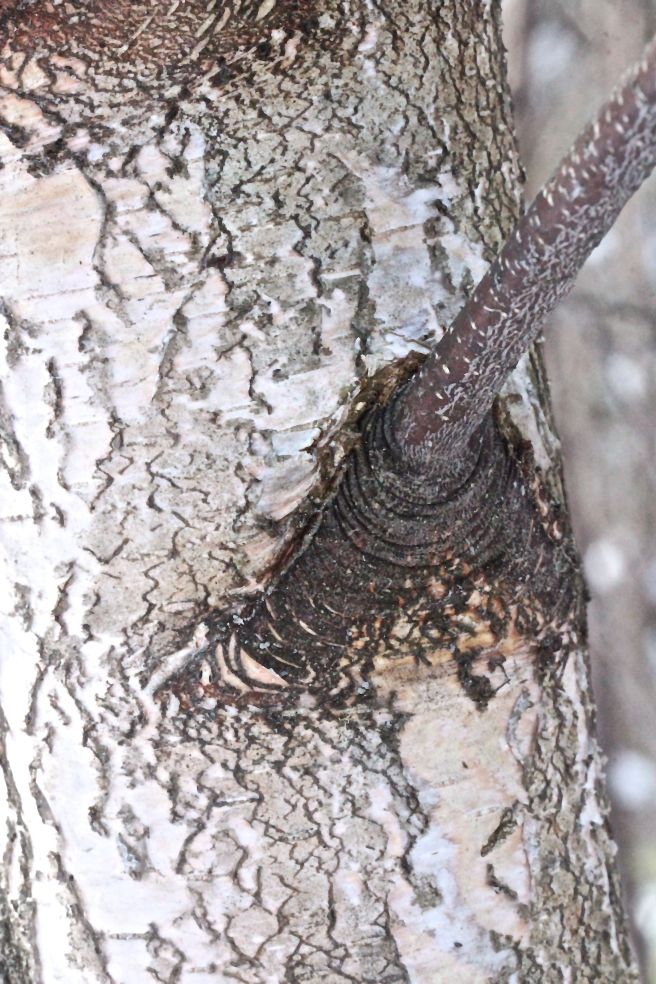 The gray chevron or triangle shows where the branch meets the trunk. 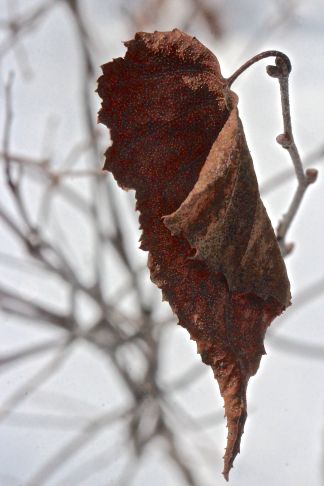 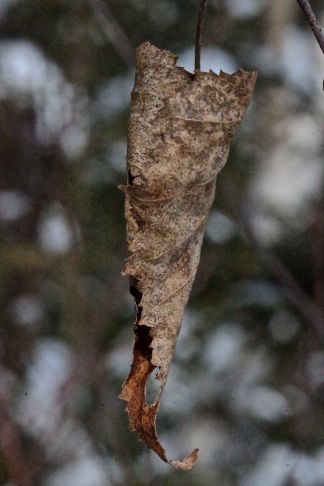 Similar in shape, a few toothy, triangular leaves folded unto themselves dangle still. Or not so still, as they swayed in the slight breeze. 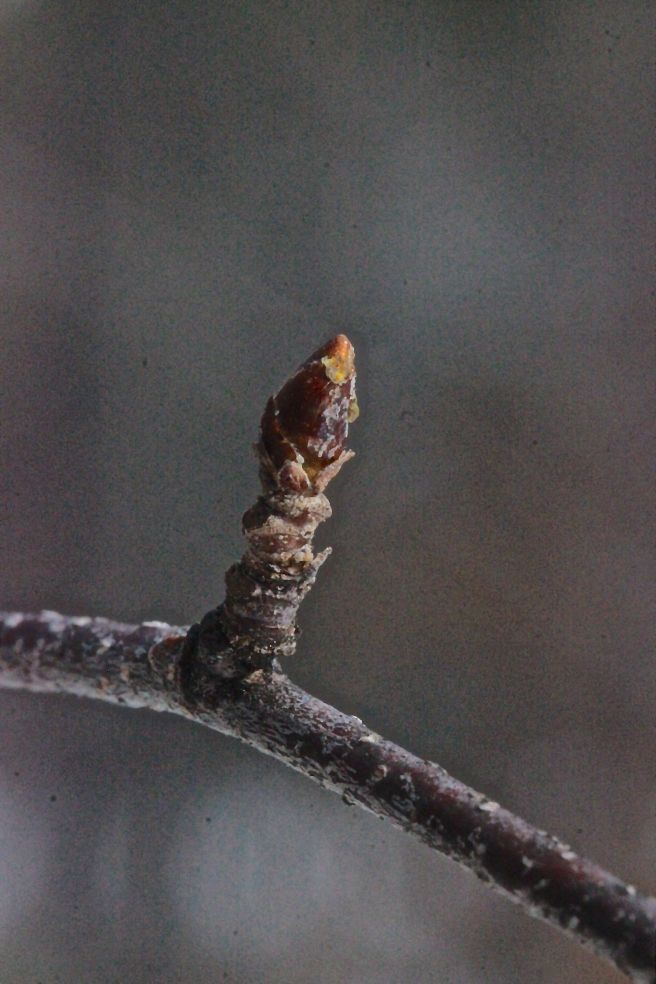 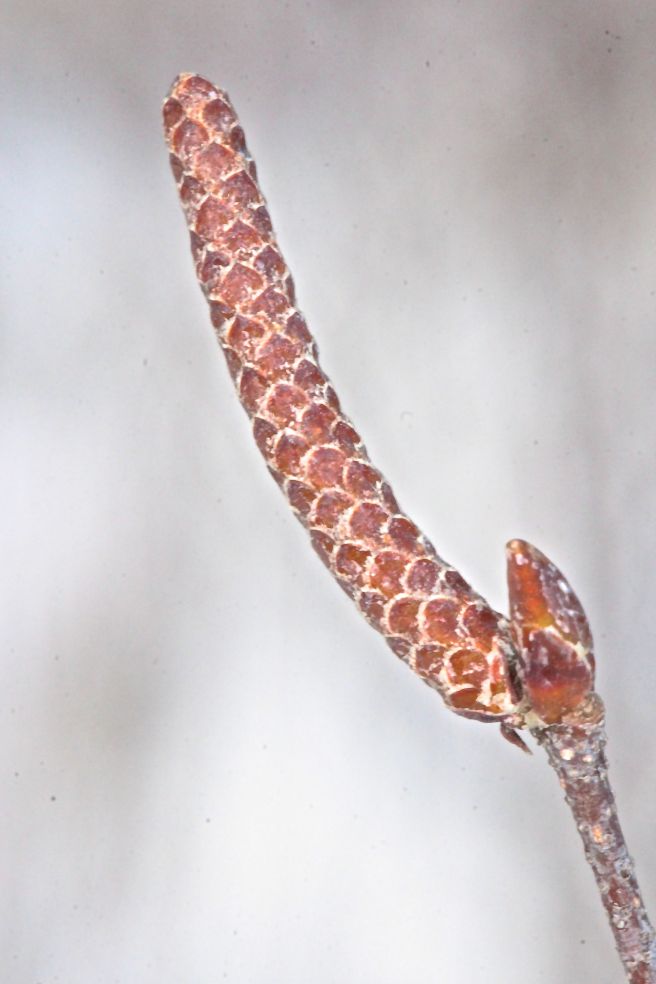 Catkins are visible on some of these trees. 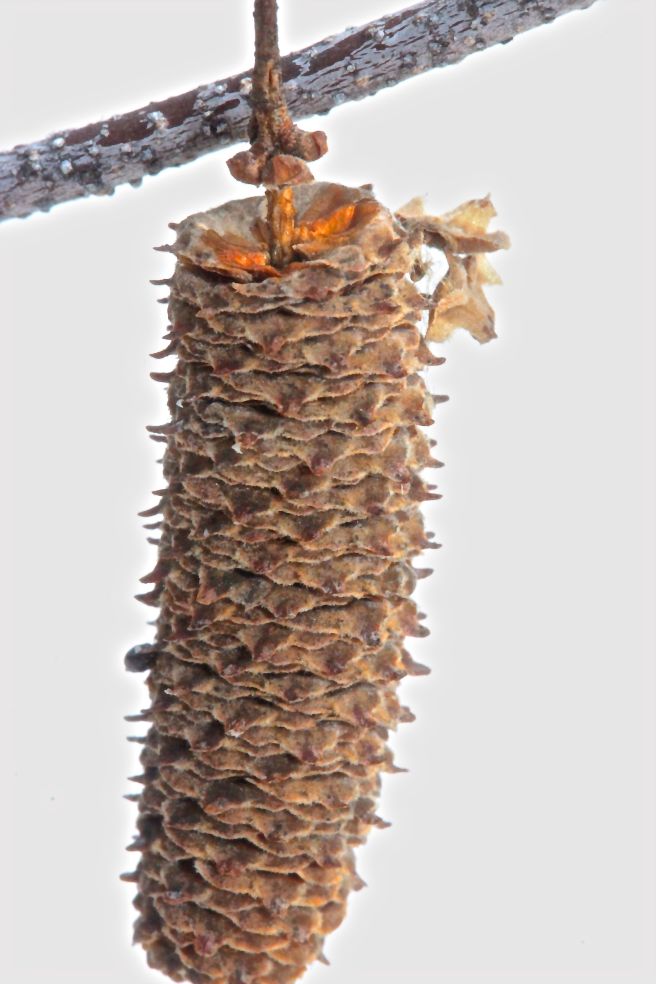 I did find a few with last year’s fruits consisting of tiny two-winged nutlets and three-lobed scales or fleur de lis in alternate layers; both detach from the central stem in winter. Many have already spread their seeds, but some like this one are waiting for the right moment. I know I certainly can’t declare when that will be. 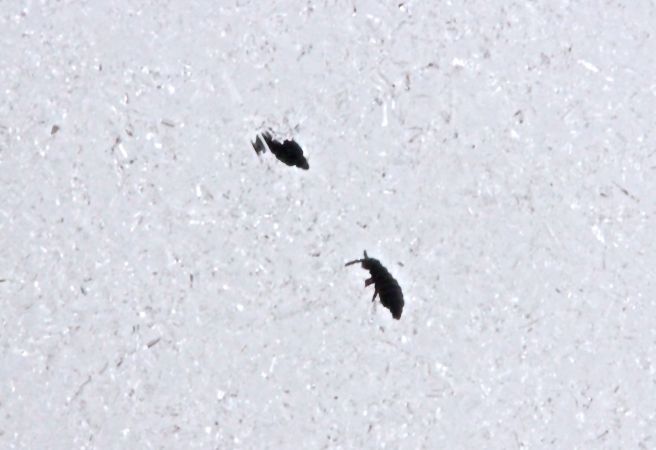 The other thing I can’t predict is when or where I’ll see snow fleas, aka spring tails. As I headed home, I found many along the barn’s drip line. It’s a sheltered spot and the sun was shining, so conditions were apparently to their liking. Who knew? Not me.

It seems we’re best at predicting the future after the fact. And so, I predict that today I won’t see deer or red squirrels or snowshoe hare. But there will be a zillion other little things that draw my attention and put a smile on my face. Worth a wonder.

10 thoughts on “Predicting the Future–After the Fact”