Several inches of fresh snow topped with freezing rain two days ago and the world is transformed. I couldn’t decide whether to wear snowshoes, micro-spikes or neither. I choose micro-spikes, which seemed a good choice at the start, but not long into my 3.5 hour tramp through the Greater Lovell Land Trust’s John A. Segur Wildlife Refuge off Farrington Pond Road, I wished I chosen the snowshoes. At times the snow was soft, but other times it sounded as if glass was breaking as I crashed through it. Broken shards slide across the glazed surface. I was the bull in a china shop. 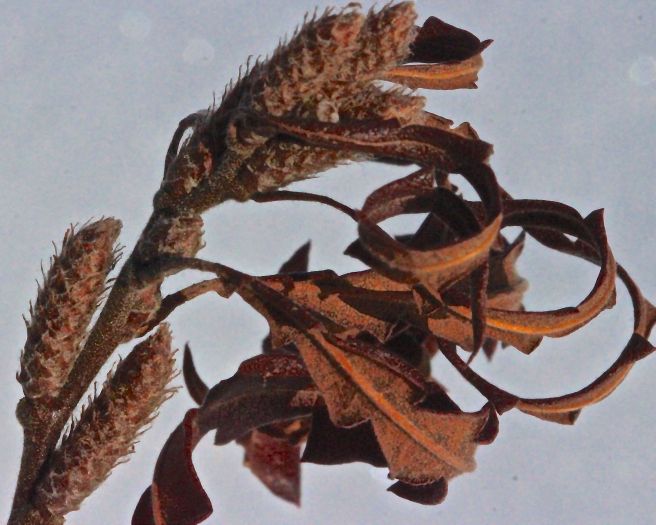 From the parking lot, I decided to begin via the blue trail by the kiosk. It doesn’t appear on the trail map, but feels much longer than the green trail–possibly my imagination. Immediately, I was greeted at the door of the shop by sweet fern, aka Comptonia peregrina (remember, it’s actually a shrub with foliage that appear fern-like). The striking color and artistic flow of the winter leaves, plus the hairy texture of the catkins meant I had to stop and touch and admire.

And only steps along the trail another great find–bobcat tracks. This china shop immediately appealed to moi. 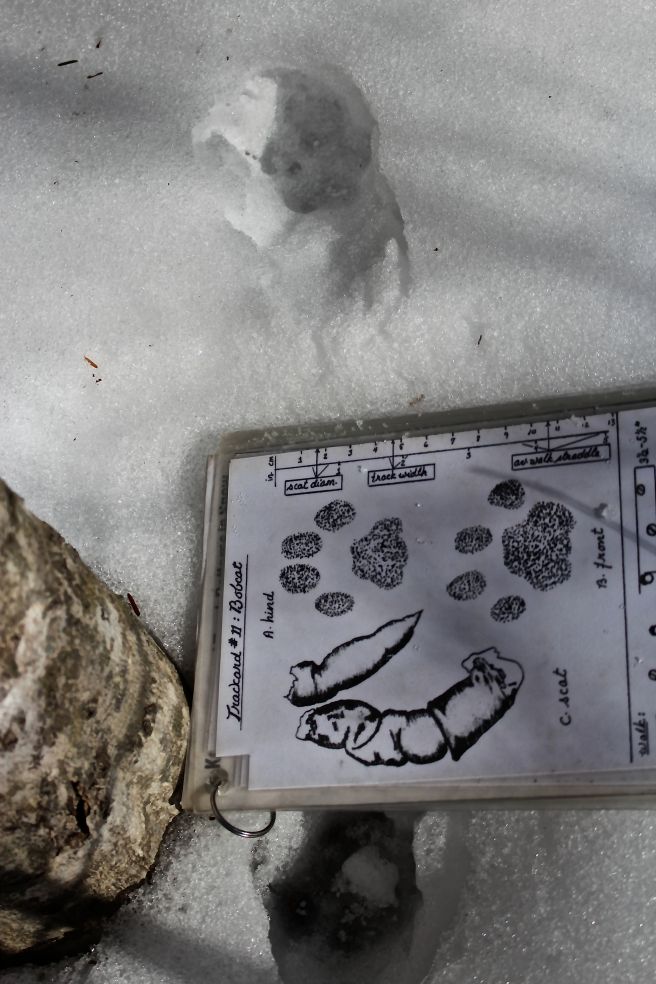 My Trackards slid along the glassy surface, so it was difficult to show the print size. But . . . it is what it is. The bobcat crossed the trail a couple of times and even came back out to explore squirrel middens. 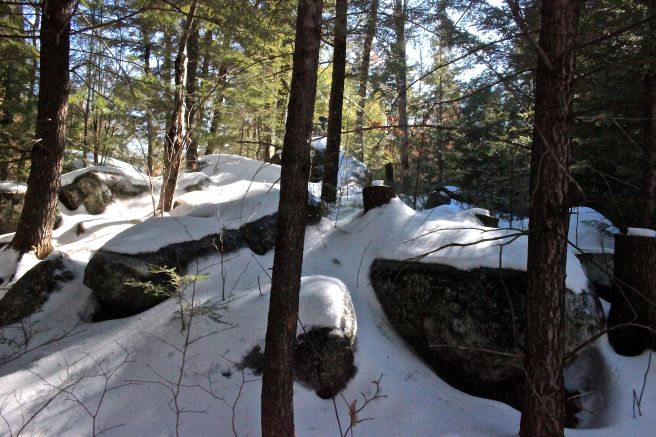 When I got to a ledgy spot, I decided to explore further–thinking perhaps Mr. Bob might have spent some time here. Not so–in the last two days anyway.

The best find in this spot–red squirrel prints. A few things to notice–the smaller feet that appear at the bottom of the print are the front feet–often off-kilter. Squirrels are bounders and so as the front feet touch down and lift off the back feet follow and land before the front feet in a parallel presentation. In a way, the entire print looks like two exclamation points.

As I plodded along, my eyes were ever scanning and . . . I was treated to a surprise. Yes, a beech tree. Yes, it has been infected by the beech scale insect. And yes, a black bear has also paid a visit.

One visit, for sure. More than one? Not so sure. But can’t you envision the bear with its extremities wrapped around this trunk as it climbs. I looked for other bear trees to no avail, but suspect they are there. Docents and trackers–we have a mission.

And what might the bear be seeking? Beech nuts. Viable trees. Life is good.

Exactly where is the bear tree? Think left on red. When you get to this coppiced red maple tree, rather than turning right as is our driving custom, take a left and you should see it. Do remember that everything stands out better in the winter landscape. 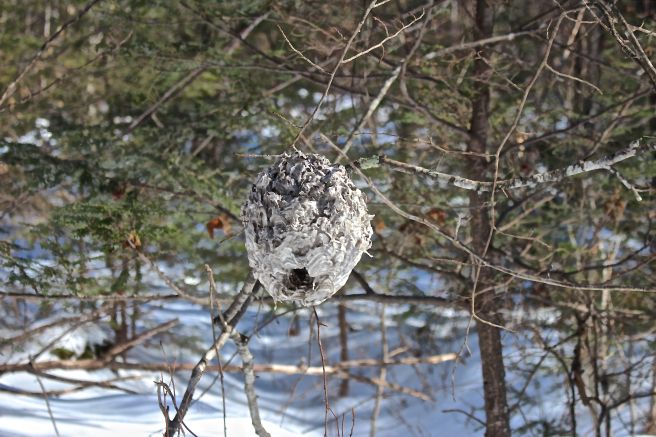 As delicate as anything in the china shop is the nest created by bald-faced hornets.

Well, it appears delicate, but the nest has been interwoven with the branches and twigs–making it strong so weather doesn’t destroy it. At the bottom is, or rather was, the entrance hole.

Witch hazel (Hamamelis virginiana) grows abundantly beside younger beech trees. Though the flowers are now past their peak, I found a couple of dried ribbony petals extending from the cup-shaped bracts. China cups? No, but in the winter setting, the bracts are as beautiful as any flower.

I have to admit that I was a wee bit disconcerted when I reached a point where the blue trail and green trail split and it wasn’t at a point that I remembered. But I lumbered on and was pleasantly surprised when I reached the field I recognized–approaching it from the opposite side than is the norm. And later on, I realized that where the blue trail again joined the green trail was a shortcut. We need to get an accurate map made of this property, but I also need to spend more time familiarizing myself with it. At last I reached Sucker Brook.

With the Balds in Evans Notch forming the backdrop, the brook is home to numerous beaver lodges, including these two.

Layers speak of generations and relationships. 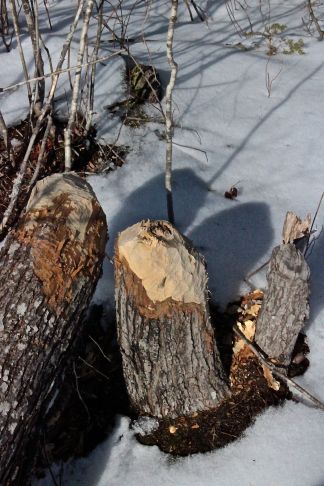 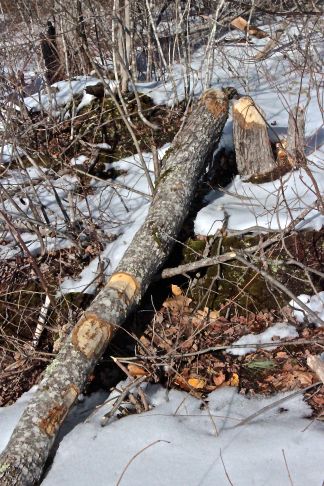 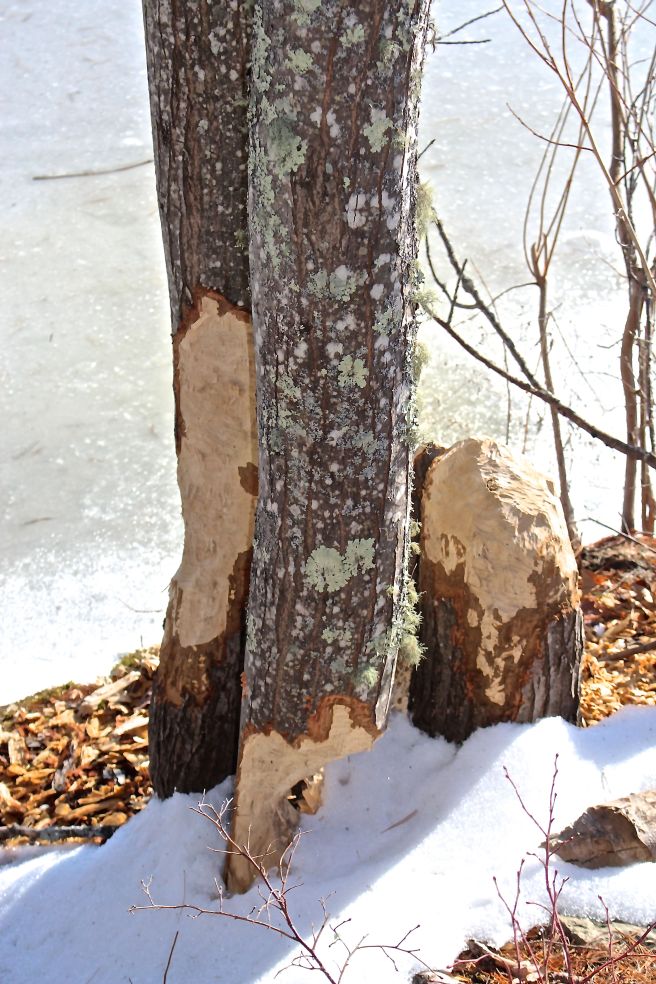 And sometimes, I just have to wonder–how does this tree continue to stand?

Spring is in the offing.

Wintergreen offers its own sign of the season to come. 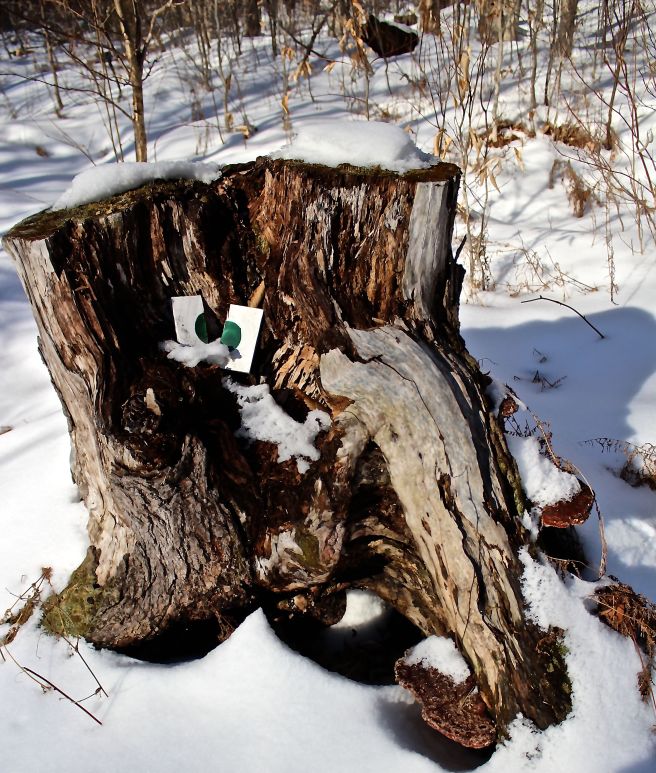 In the meantime, it’s still winter and this hemlock stump with a display of old hemlock varnish shelf (Ganoderma tsugae) caught my eye. By now, I was on the green trail.

But it’s what I saw in the hollow under the stump, where another tree presumably served as a nursery and has since rotted away, that made me think about how this year’s lack of snow has affected wild life. In the center is ruffed grouse scat. Typically, ruffed grouse burrow into snow on a cold winter night. Snow acts as an insulator and hides the bird from predators. I found numerous coyote and bobcat tracks today. It seems that a bird made use of the stump as a hiding spot–though not for long or there would have been much more scat. 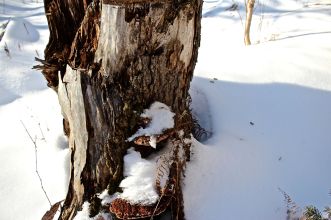 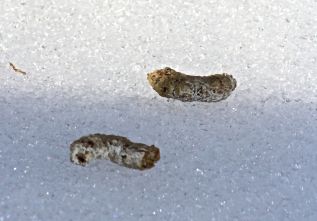 On the backside of the stump, more ruffed grouse scat white-washed with uric acid.

Apparently it circled the area before flying off.

Moments later I startled a ruffed grouse in a tree while I observed turkey tracks. Though their prints and scat appear to be similar–turkeys are soooo much bigger in all respects.

My trek ended in the same manner that it began–with sweet-fern offering a graceful stance despite my bull in a china shop approach.

6 thoughts on “Moi–Bull in a China Shop”