I have bad camera karma as my guy can tell you and last week my Tamron
SP 60MM F/2.0 Di II 1:1 Macro decided to quit. I know not why. But, we were headed south for today’s Mondate, so we detoured into Portland hoping for a quick fix. Not to be. Two or three weeks they said. ARGH! 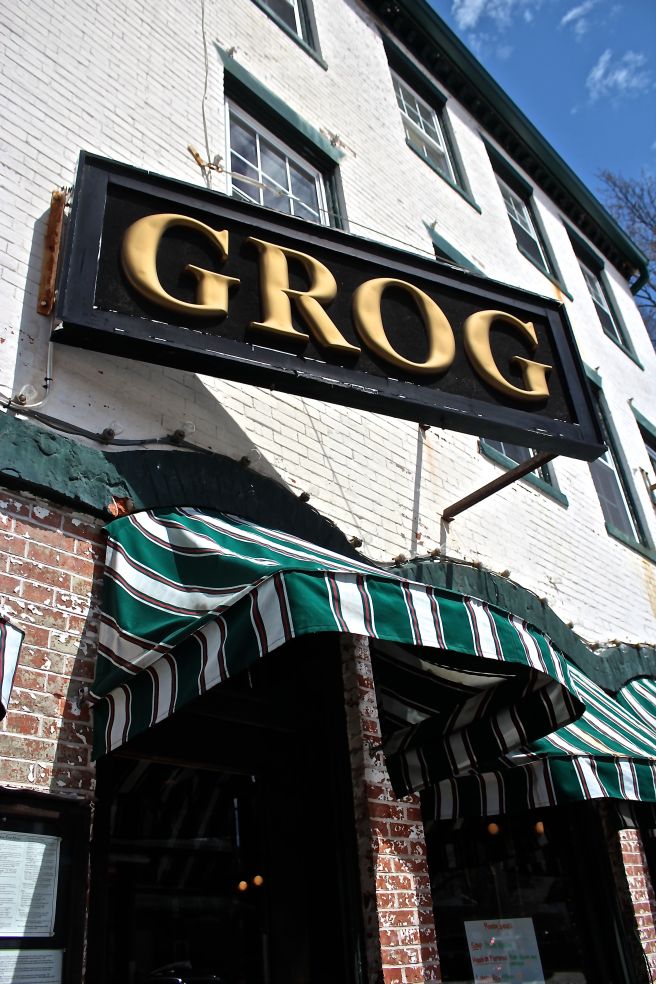 C’est la vie. As my nephew once responded about thirty years ago when he was a little tyke, “La vie.” We didn’t get to see him today, but if his ears were burning it’s because we met up with his parents at the GROG in Newburyport. I needed a sister fix–and a sister hug. Thanks lmacbud and docbud 😉 And thanks also for the chocolate chip cookies. I’m amazed they survived the trip home. Guess we were full.

After we parted ways, my guy and I drove out to Plum Island, an 11-mile barrier island off the shore of Newburyport and Newbury, and home to the Parker River National Wildlife Refuge. Most of the parking areas along the salt marsh were closed and so we headed back and walked along the board walk in the Salt Pannes Wildlife Observation Area.

Due to the fact that it’s plover nesting season, we eventually reached a stopping point. According to the refuge’s Web site: “The Atlantic coast population of this small shorebird was listed as threatened on the Federal Endangered Species List in 1986. As with so many other species in decline, plover populations plummeted primarily due to habitat disturbance and loss. Plovers arrive to breed and nest on the refuge beach beginning in late March. Refuge management efforts focus on minimizing human-caused disturbance by restricting public access to the refuge beach during this critical time.”

As we stood there, we realized that there was a small cranberry bog below. And we found a little sign that listed a couple of interesting facts: 1. the bog’s sphagnum moss sits atop sand. I look at wet or damp sphagnum every day and had no idea it could survive on sand; 2. like a vernal pool, the bog is used as a breeding pool and in this case by a rare and elusive amphibian–the Eastern Spadefoot Toad. I was itching to get down there and explore, but . . .

we paused for a few more moments and then followed the board walk back. 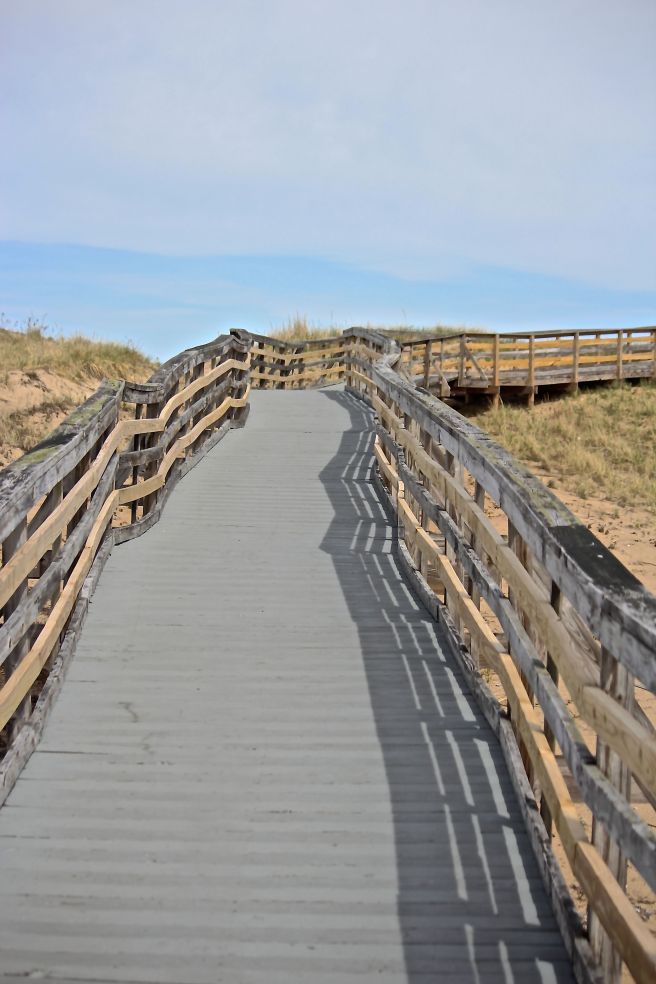 Again we stopped and this time we could follow a board walk all the way to the beach. As I walked, I wondered about the crooked mile but came to the conclusion that it follows the lay of the land–or rather dunes we were crossing.

To our right, our movement was restricted. I suspect Rachel Carson would have approved of these signs. In 1947, the U.S. Fish and Wildlife Service published a booklet Ms. Carson wrote about the refuge.

We walked to the water’s edge and looked south. The stretch of beach invited exploration, but we don’t always need to get what we desire.

Nearby, my guy found a piece of drift wood to sit upon.

In no time, he was mesmerized. 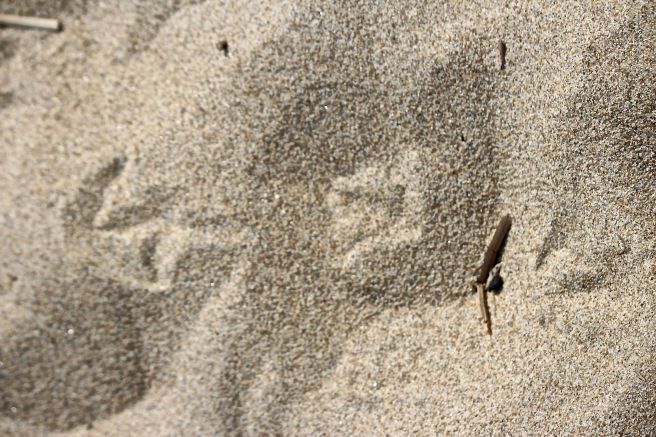 I needed to follow in the tracks of others.

A day beside salt water always evokes memories of my childhood spent exploring the Connecticut coast. How many times did I stick a line attached to a clothespin down into the jetty in Clinton harbor to catch crabs? 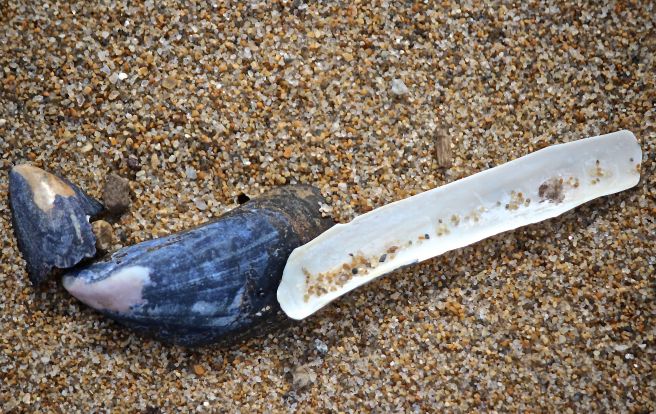 How many mussels did I use as crab bait? How many broken razor clam shells sliced my feet? 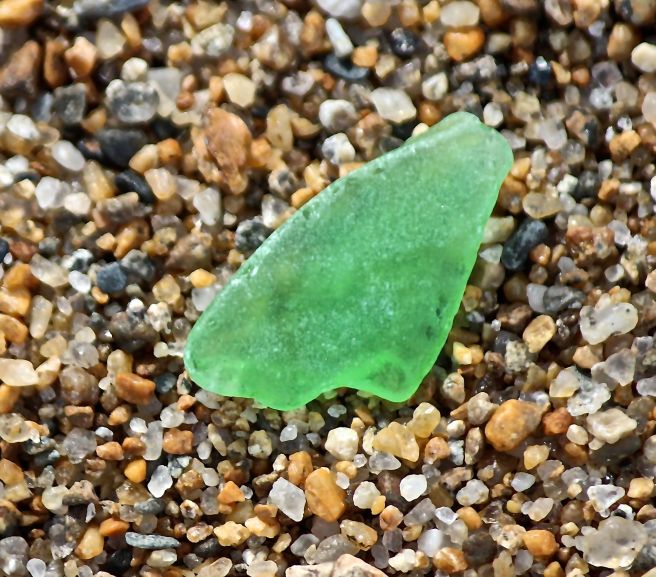 How many pieces of sea glass did I collect?

And how many clam shells became Christmas presents? 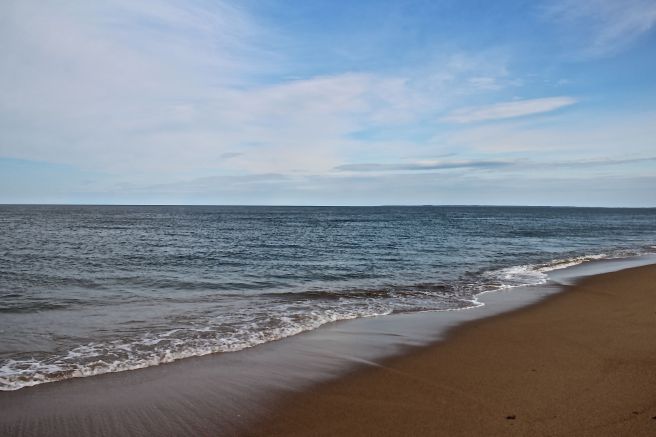 We couldn’t stay long and know that there is so much more to see and wonder about in this special place. Before leaving, we filled the innermost recesses of our lungs with salt air and then returned to the board walk.

Suffice it to say, for this Mondate, we got our fill of fixes.