We knew what flowers we’d show off and had a general idea of what birds we’d see when we headed down the trail from the Flat Hill parking lot at the Greater Lovell Land Trust’s Heald and Bradley Ponds Reserve in Lovell early this morning. But from the get-go this turned into one very special hike that filled us all with the wonder of life. 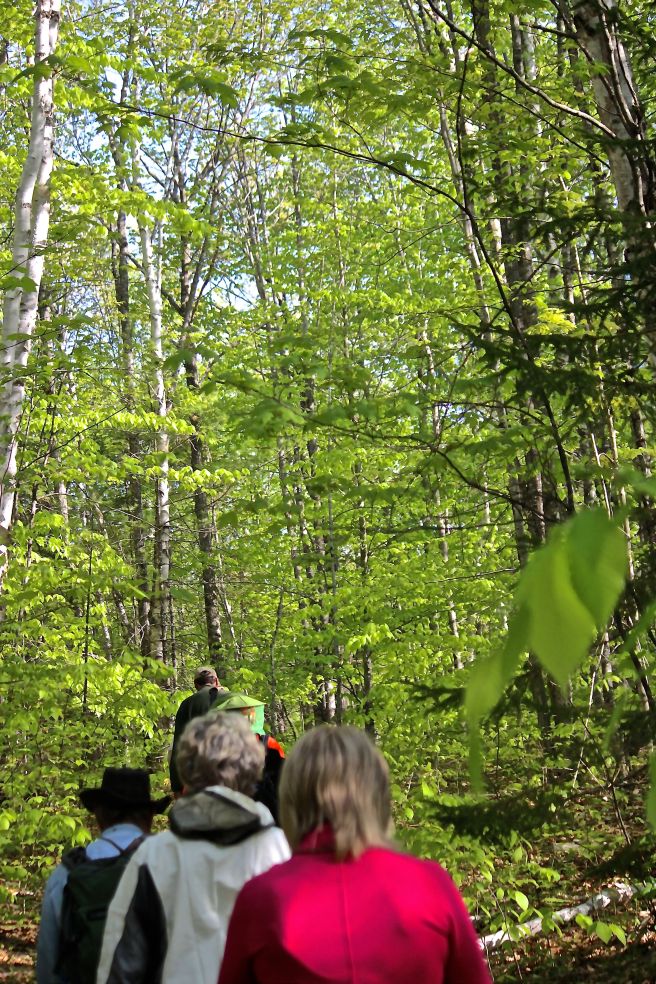 Maybe it was because we headed off on a silent march, the better to take in the cacophony of bird songs. With Linda and Heinrich in the lead, our intention was to make a bee-line to the viewing platform. Linda encouraged everyone to note the flowers along the way–with a promise to stop and celebrate them on the return trip. We’d decided during a pre-hike that we wouldn’t follow the loop trail around Perky’s Path. We wanted this to be a different experience.

The view from the bench was beautiful, but the birding there was only so-so, much to our dismay. 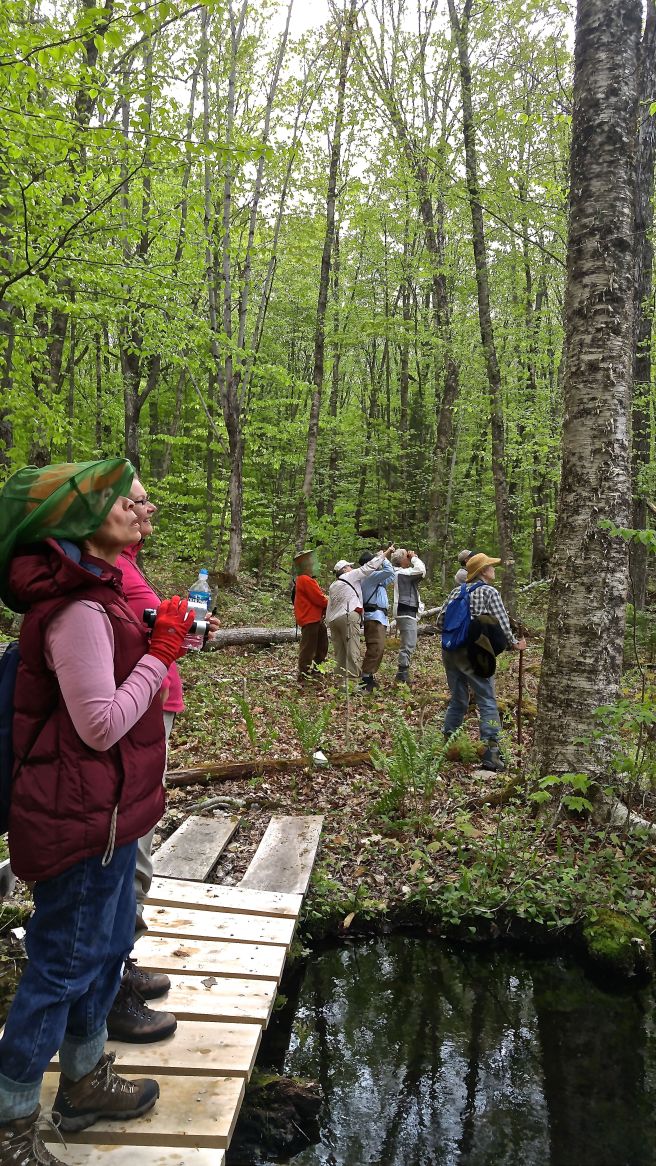 On to the bridge we moseyed. Our one disappointment, we didn’t hear the American bittern that had entertained us with its toilet plunger call during the pre-hike. 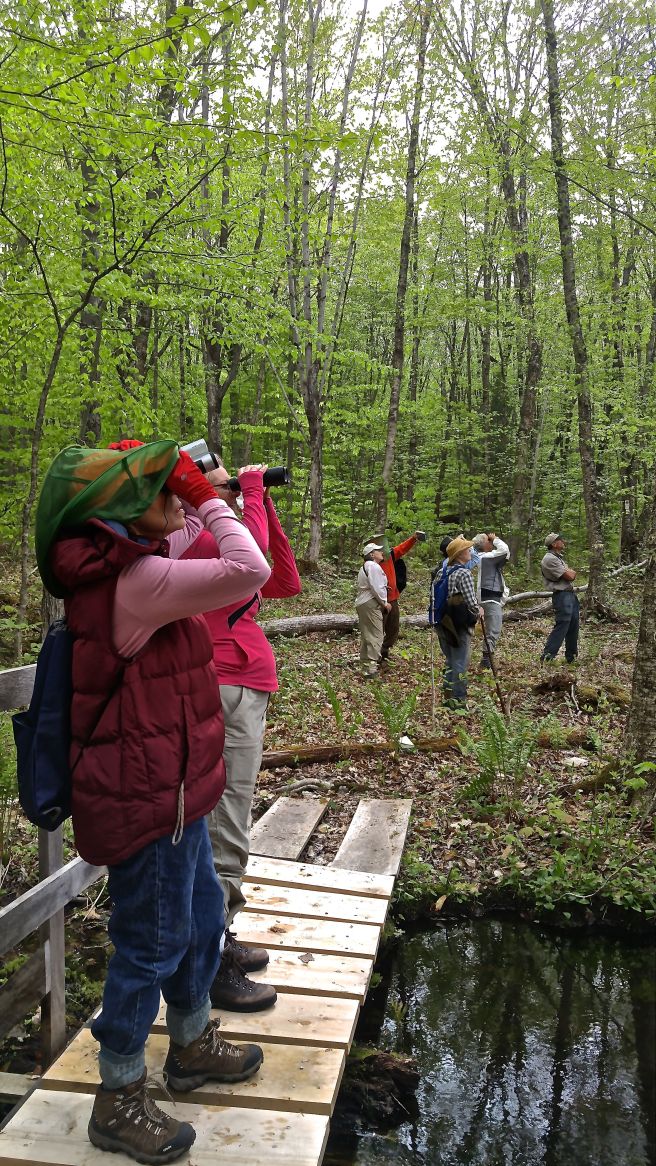 But that didn’t stop us from raising our binoculars frequently–for red-winged blackbirds, Canada geese, blue jays, several species of woodpeckers, sparrows, warblers, wood ducks, chickadees, a wood thrush and more. We heard the ovenbird and vireos, but never caught sight of them. 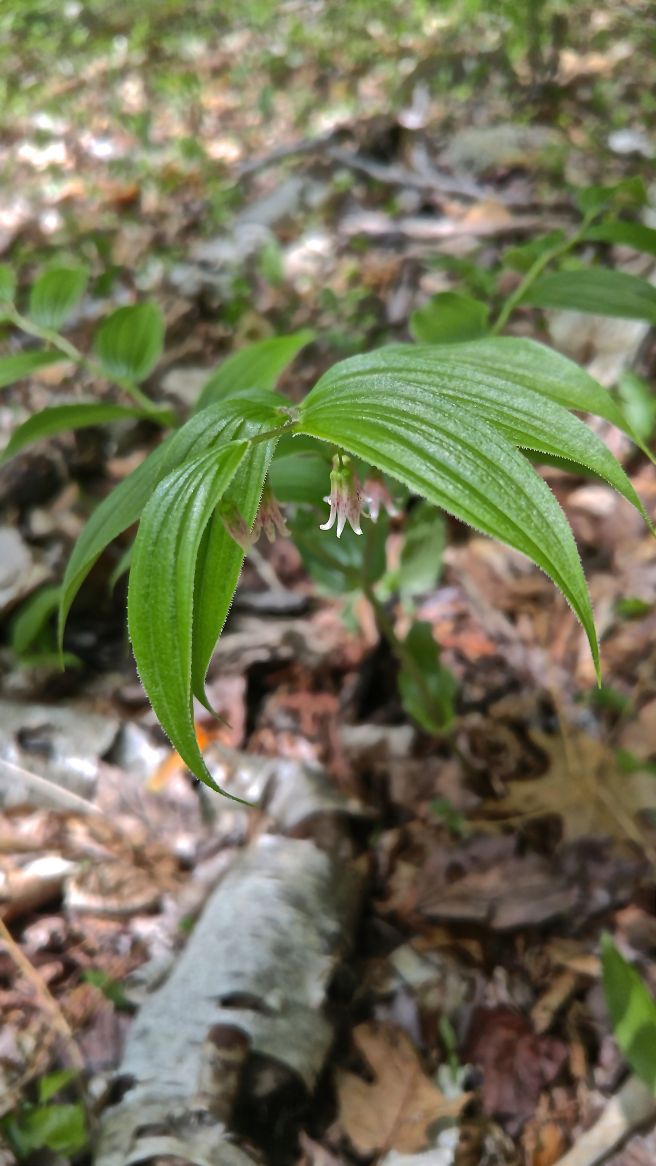 While Heinrich was our birding guide, Linda used the area just beyond the bridge to begin our examination of flowers. 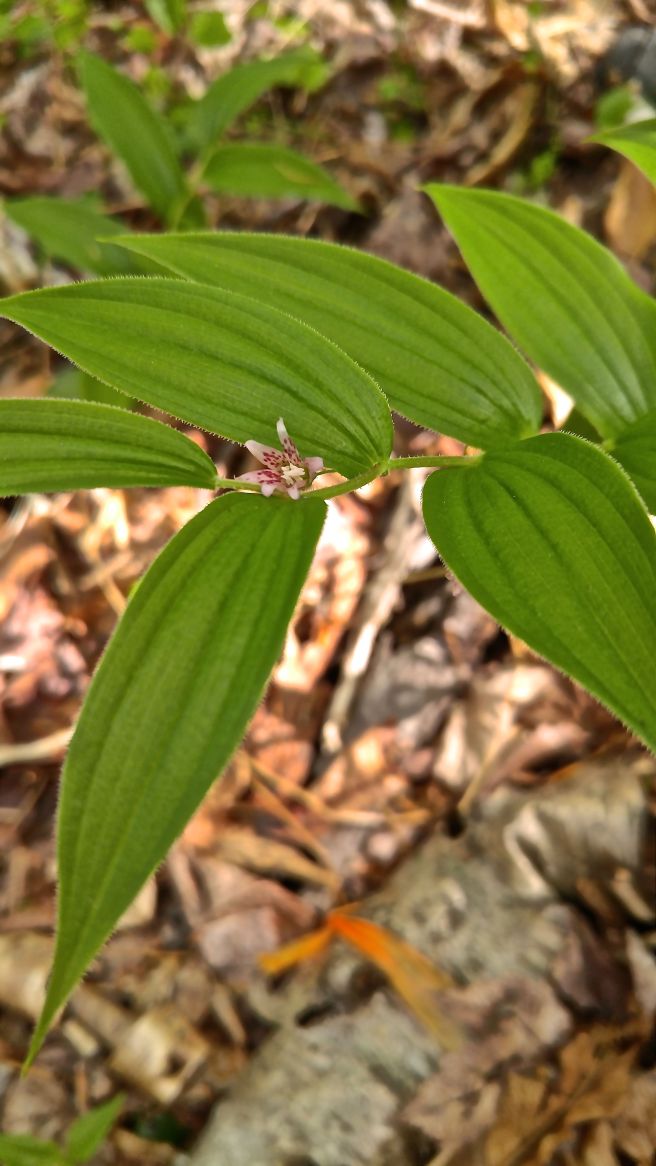 It was while we were moving in for a closer look at the rosy twisted-stalk, that someone spied what became the center of our attention for the next hour. 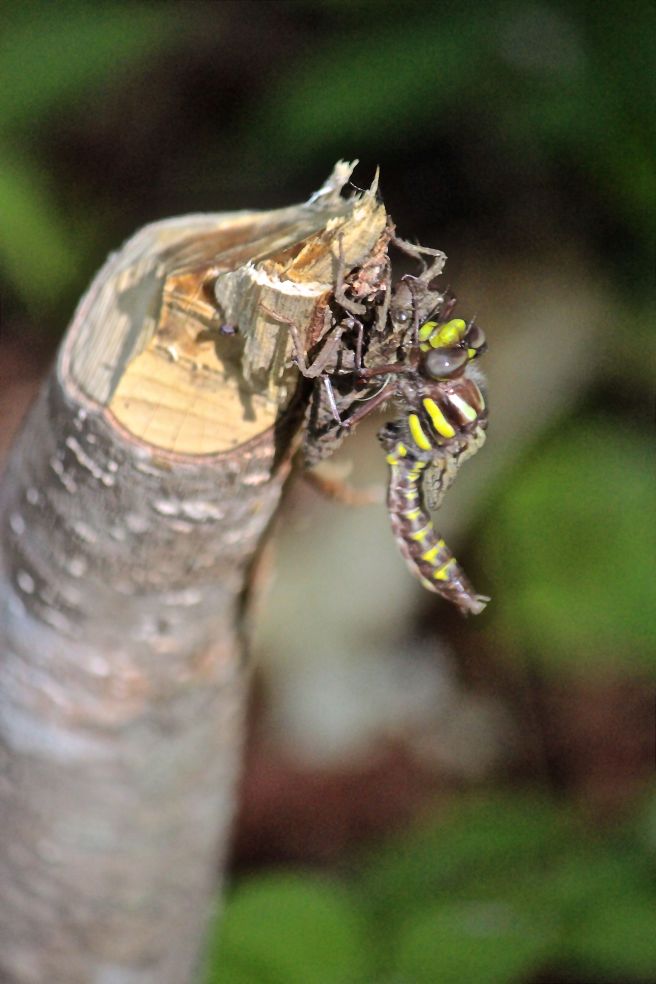 A dragonfly had just split open its exoskeleton and emerged from the nymph stage. Of course, we were standing by a beaver pond, and so it seemed only appropriate that it would use the top of a sapling cut by a beaver. 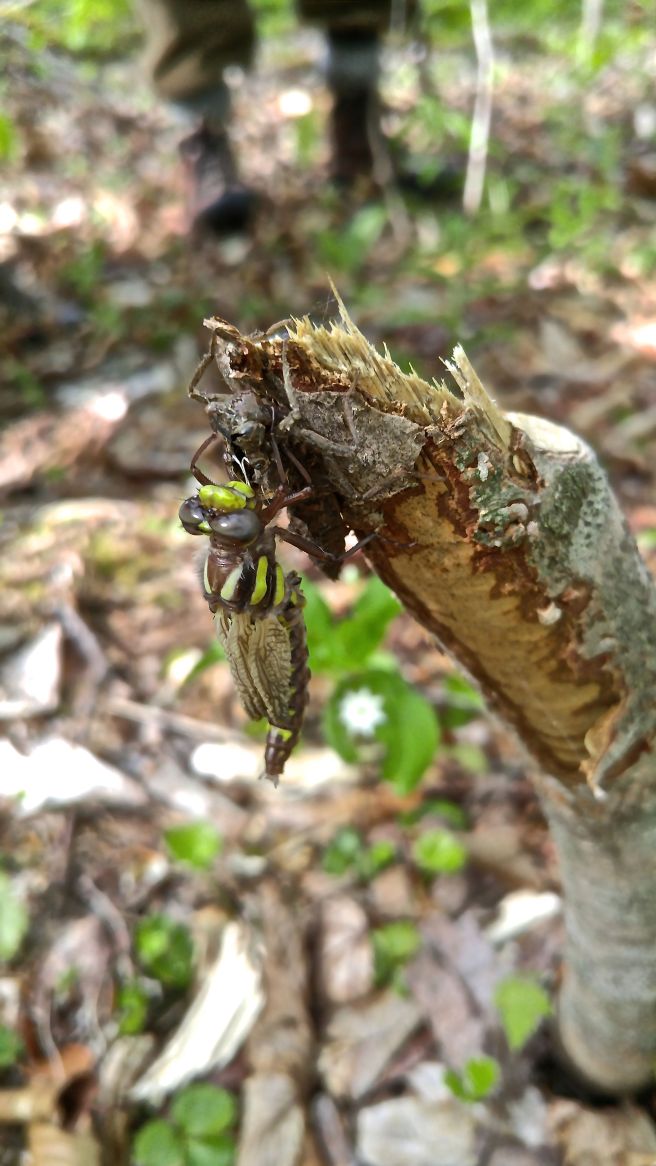 By pumping air into its body, the adult slowly grew larger. 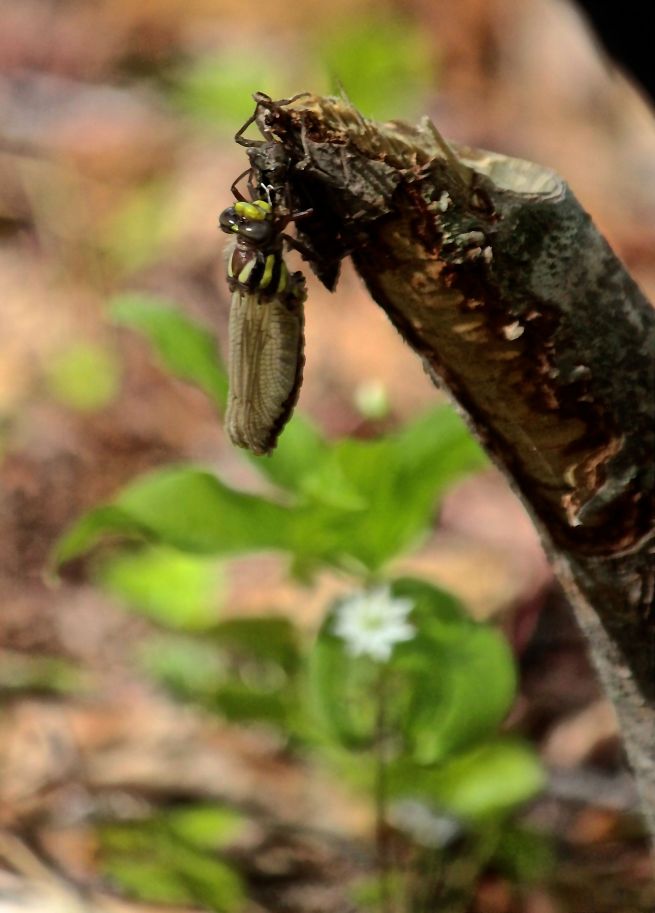 As it inflated the wings with blood pressure, they began to extend. 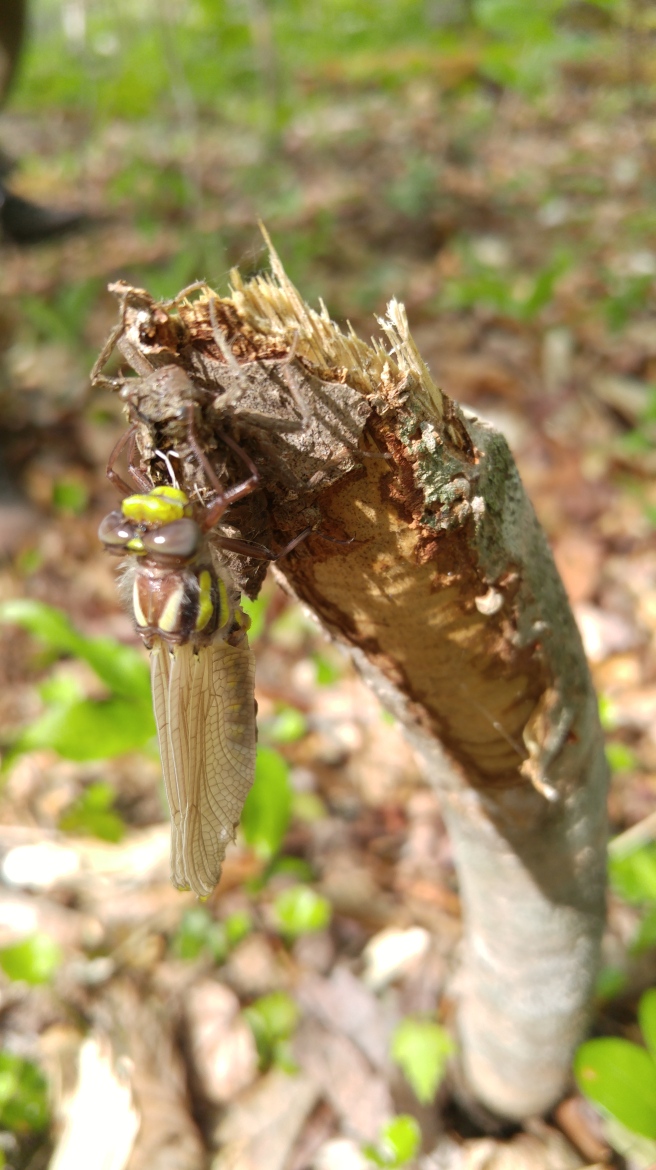 The veinous wings remained folded over its back as we continued to watch. 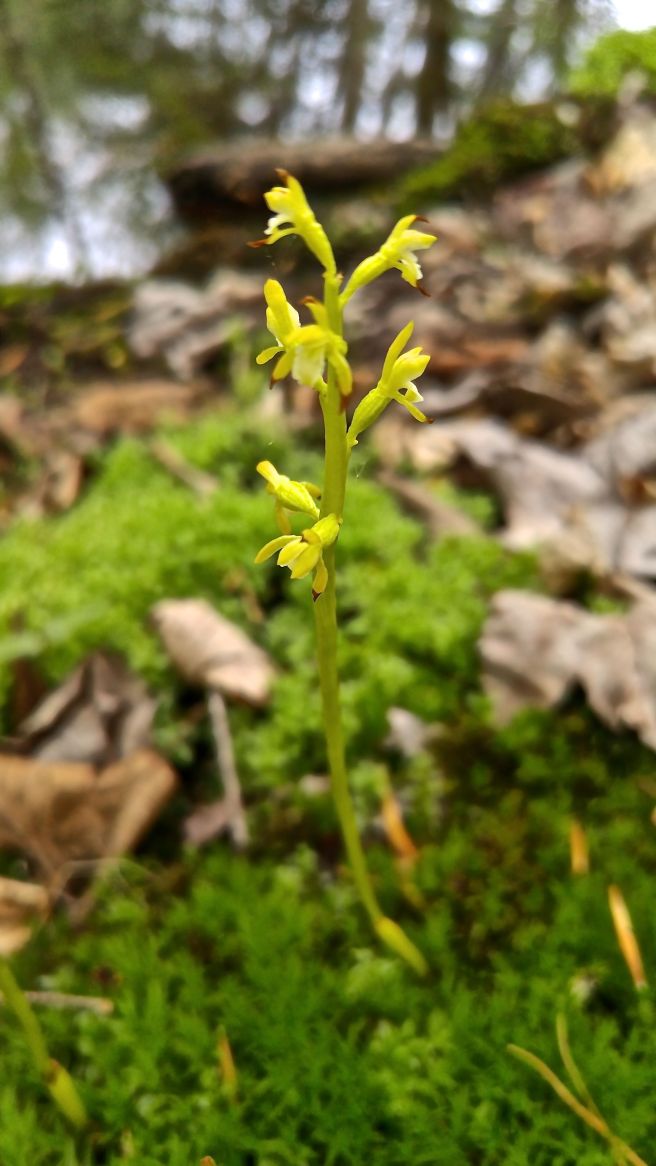 We were in that one spot for a long time, but when Linda inquired if anyone wanted to start back, all were silent. We did, however, take our eyes off the dragonfly for brief moments. And because of it, we got to know a small area rather well. A few of our discoveries included  the yellow-green, early coral-root orchid, which has no leaves, 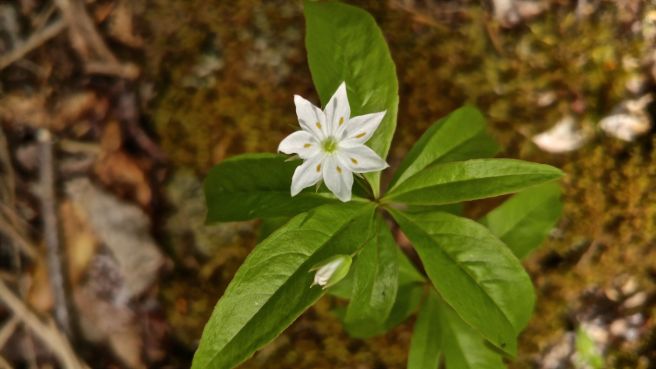 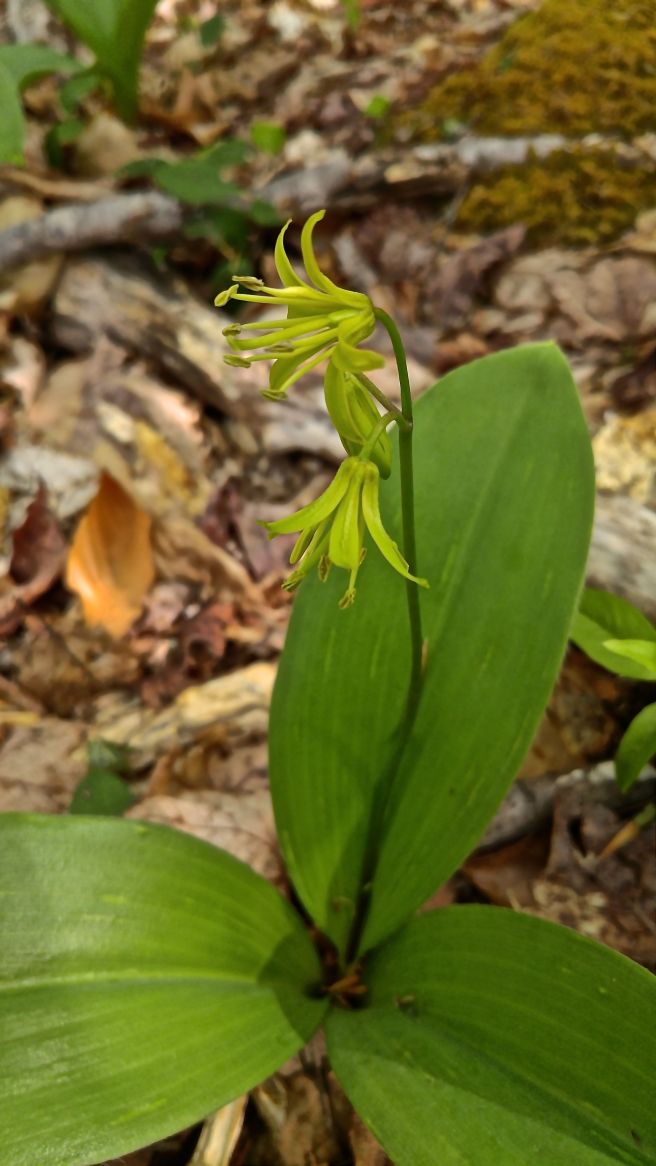 and yellow clintonia, aka bluebead lily. 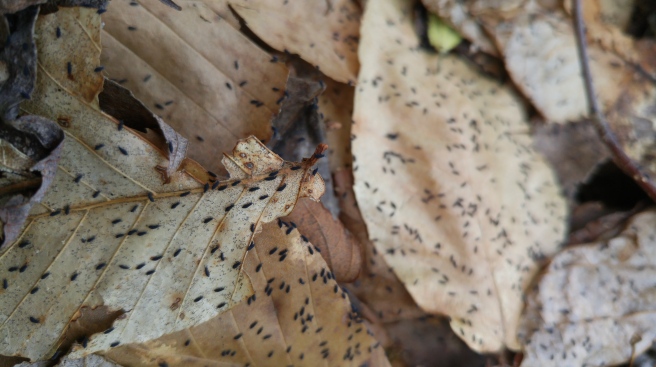 We also saw hot chili pepper on the leaf litter and . . . 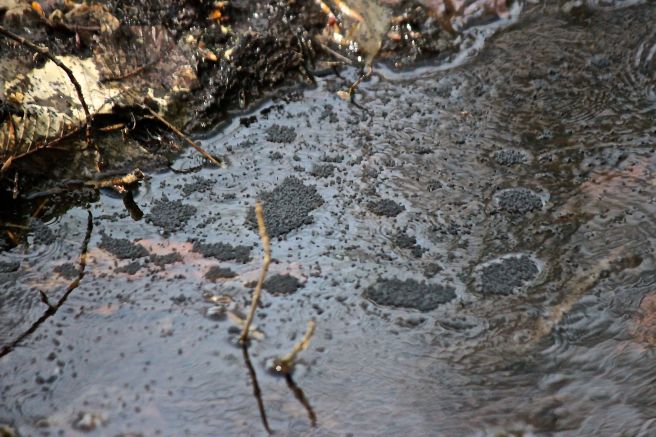 in the water. Springtails galore. Yes, aka snow fleas, but obviously we can see them even when there isn’t snow on the ground. 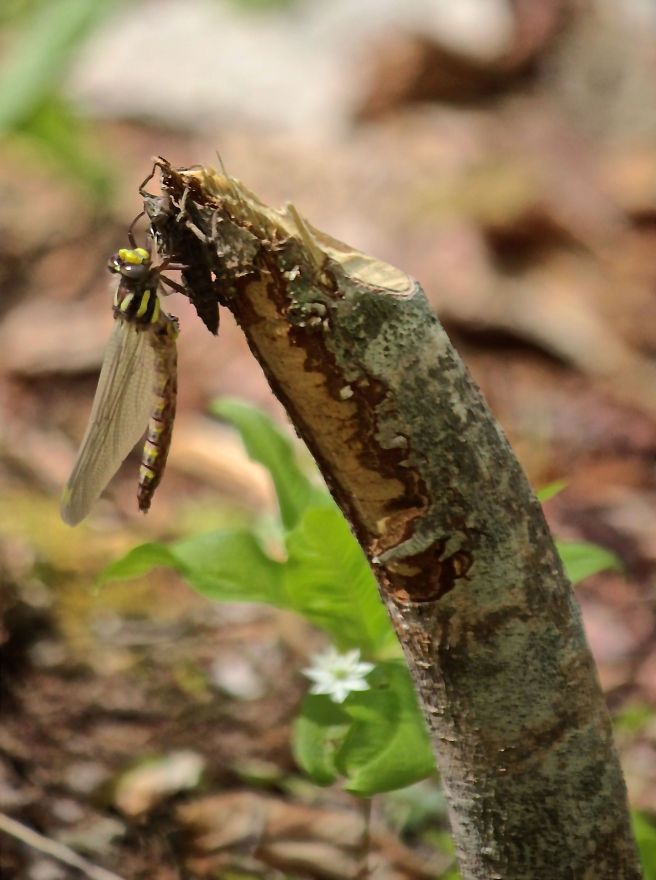 As we explored, we continued to keep a watchful eye on our friend. In fact, he became “our” dragonfly. An hour later, the melodic song of a Baltimore oriole pulled us away and we finally started back along the path. 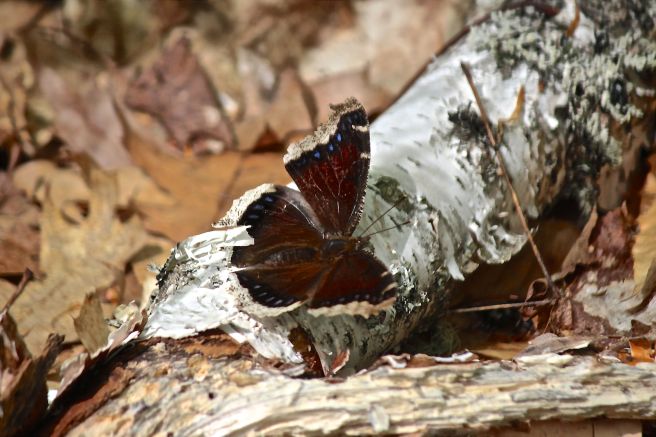 We paused frequently to admire the flowers and leaves, but then another flyer slowed us down and became “our” mourning cloak as it settled on a fallen tree and then fluttered amongst us. Happy were we to have shared such moments of awe. 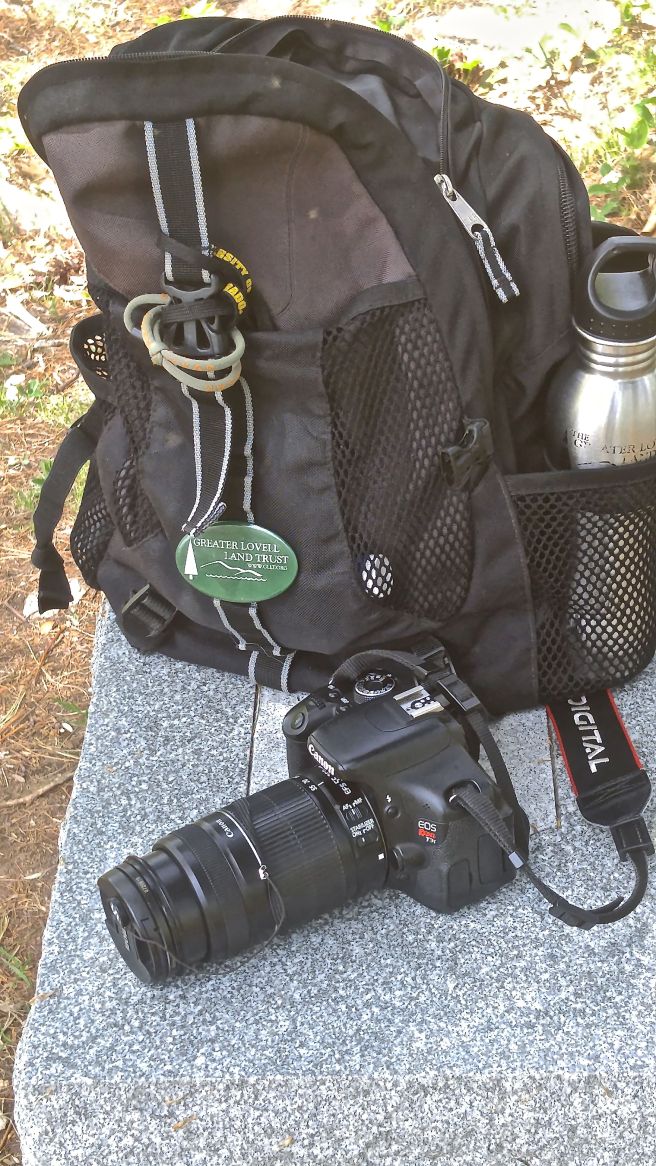 Though our walk had lasted longer than intended, I wasn’t ready to head home, so once everyone left, I turned back and climbed Amos Mountain using the Saddle Trail. It was hot and buggy, but I went for a reason and wasn’t disappointed. 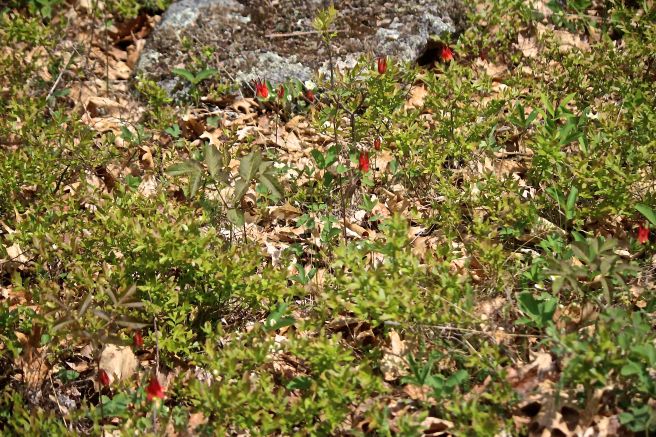 Among the grasses and violets, 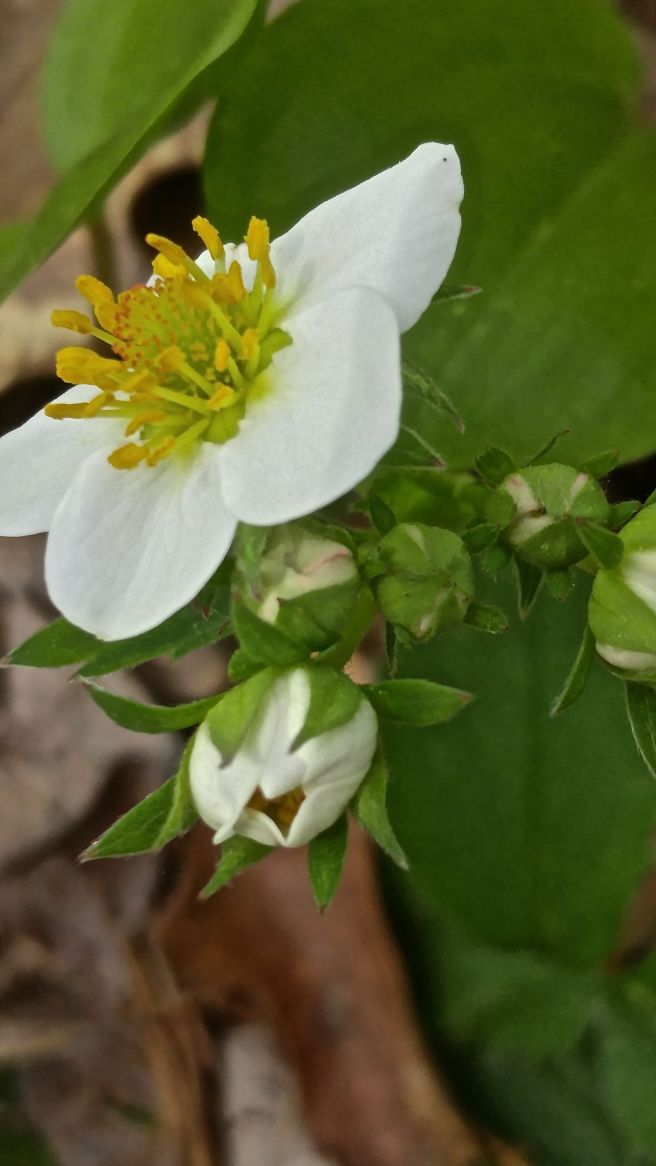 the wild strawberries grow. But that’s not all. 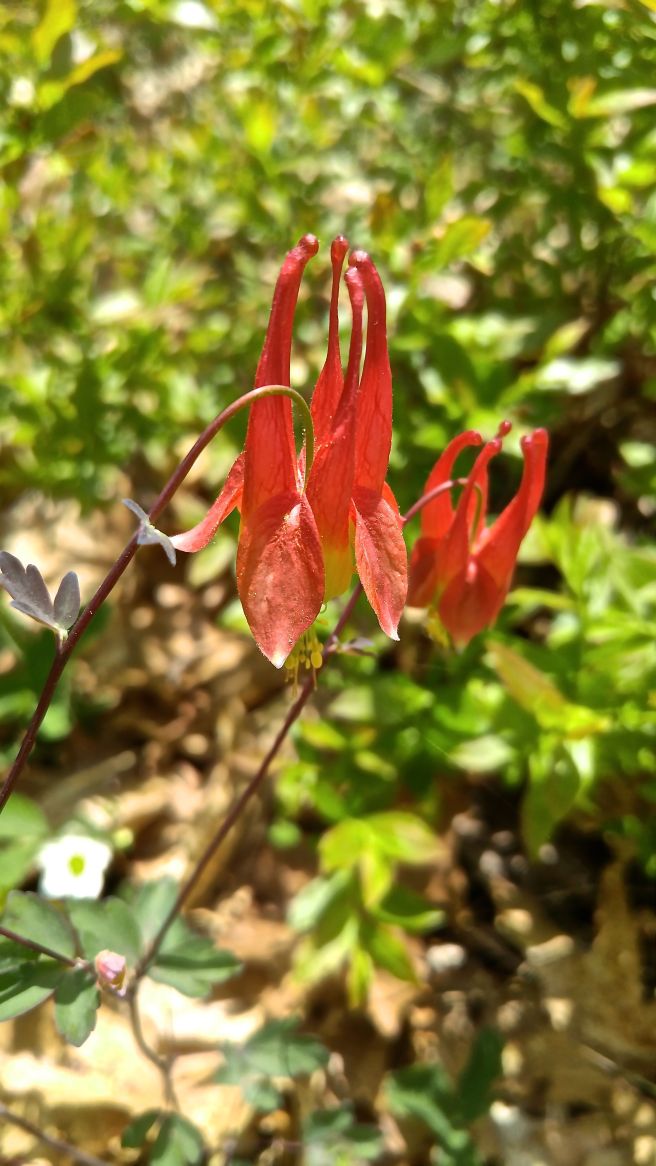 It was the spurred red and yellow flowers of wild columbine that I wanted to see. 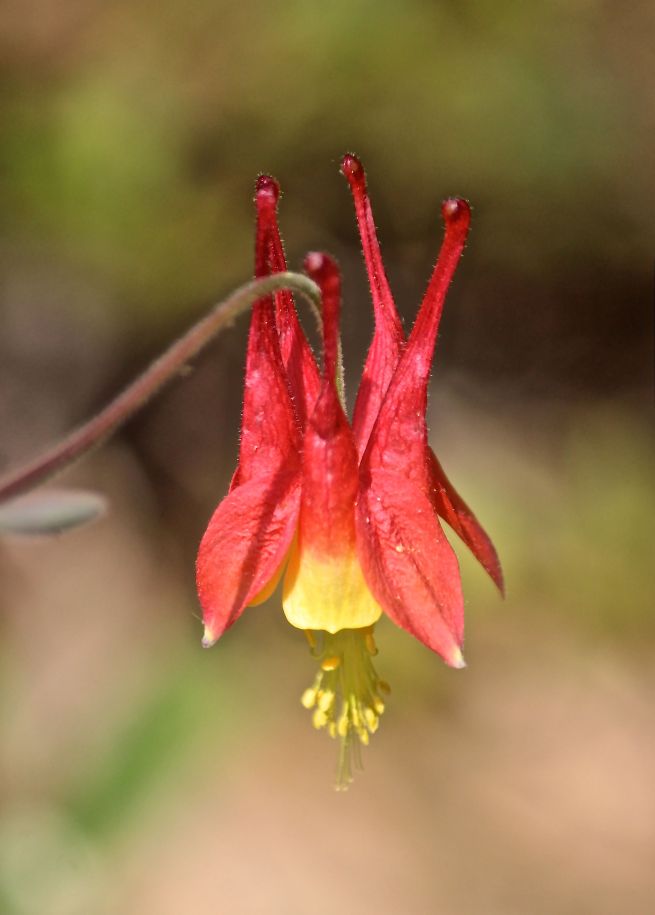 Numerous yellow stamens projected downward and surrounded the green pistils with their long, thin styles, creating the look of an ornate lantern dangling from a post–thus its other common name, little lantern. I really don’t care what it’s called. Spending time in its presence was all that mattered.

The same was true for our dragonfly experience. We wallowed in wonder today and let nature reveal its glory.

6 thoughts on “Wallowing in Wonder”