When she invited me to join her for a walk down a dirt road, I knew Jinnie Mae and I would make some wonderful discoveries, but had no idea what begged to be noticed. 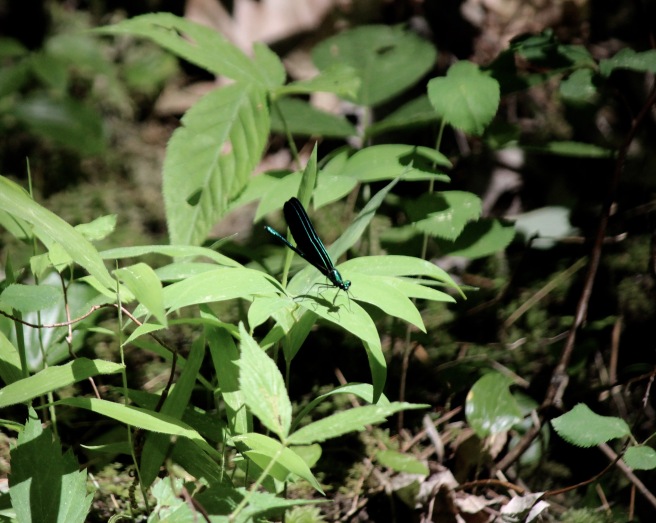 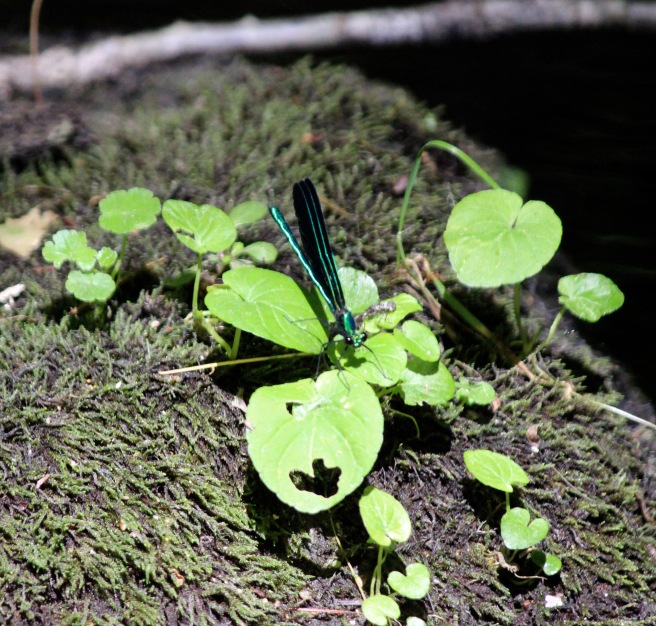 Beside a small stream, we were in the land of numerous ebony jewelwing damselflies, their metallic green bodies, beady black eyes and jewel-outlined wings showing brilliantly as they flitted about. 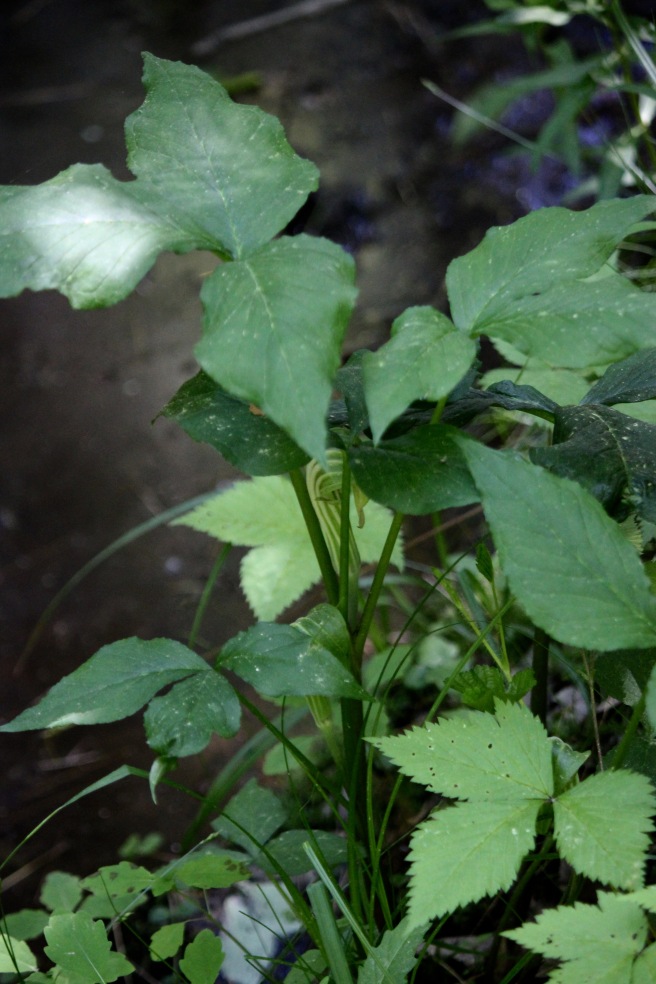 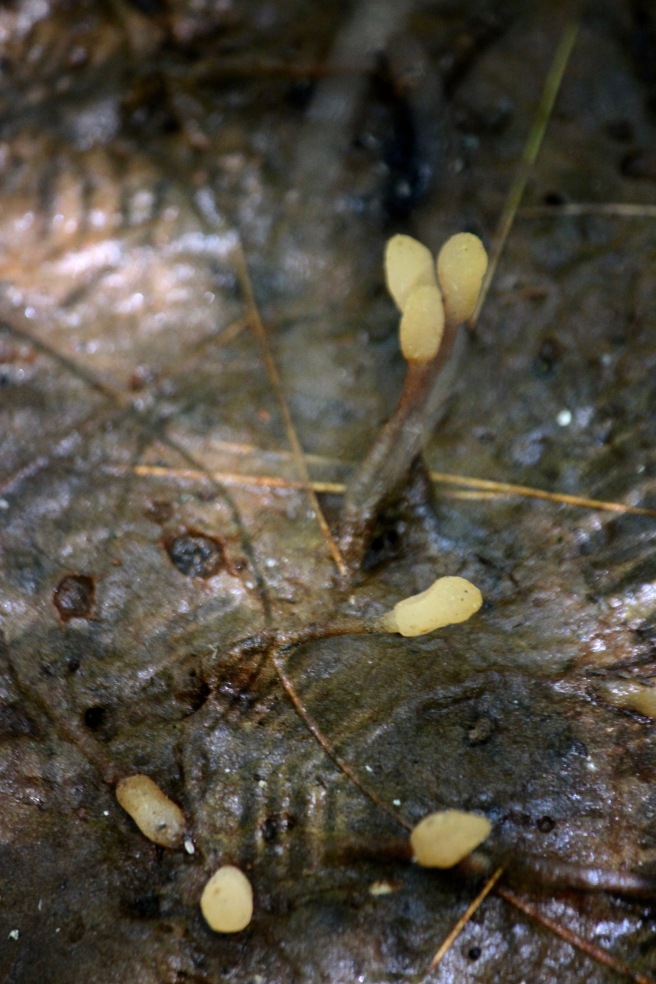 swamp candles lighting up the water, 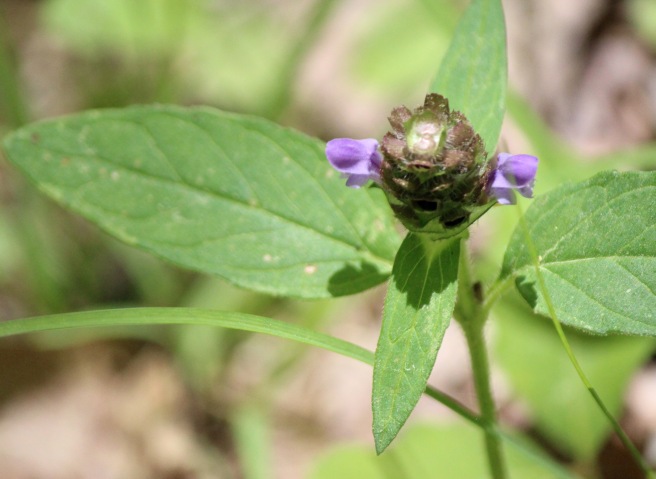 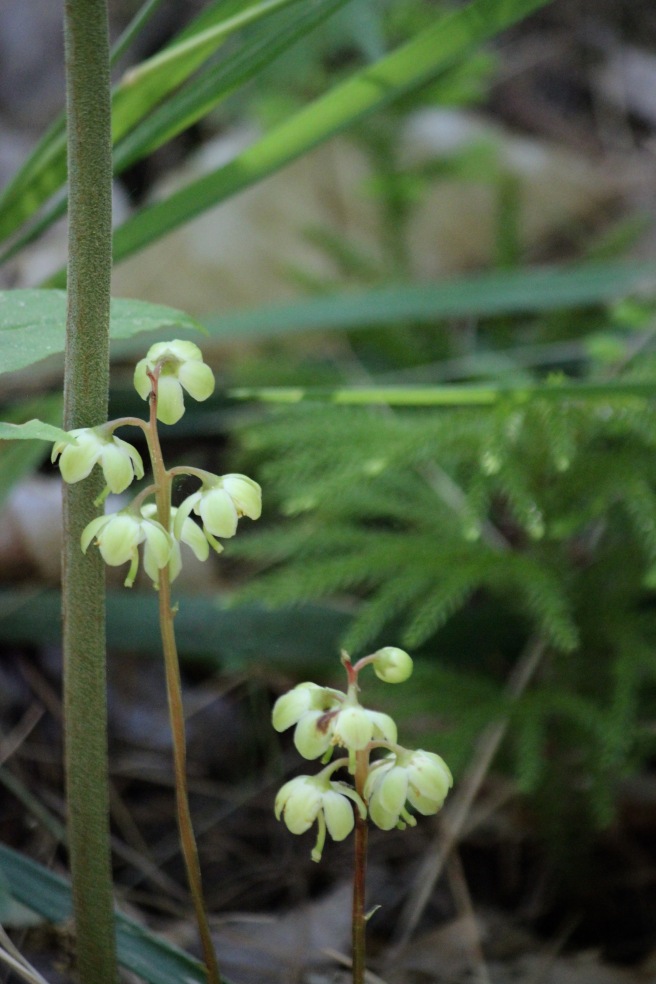 and waxy-petaled pyrola flowers with styles curved below like an elephant’s trunk. 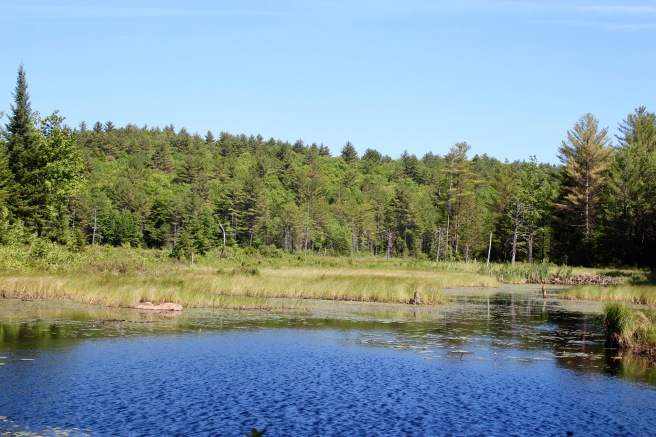 We stopped by a beaver pond and decided they have moved on, 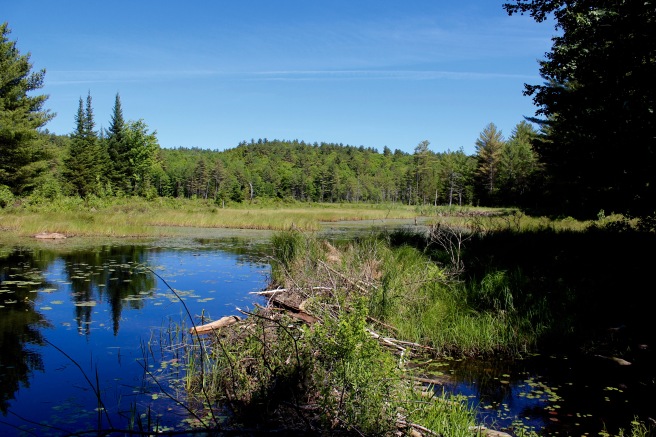 but their works were still evident. 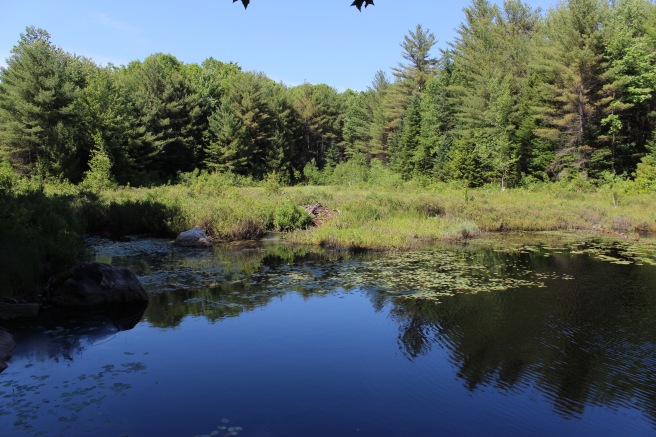 Though the lodge may be abandoned by beavers, 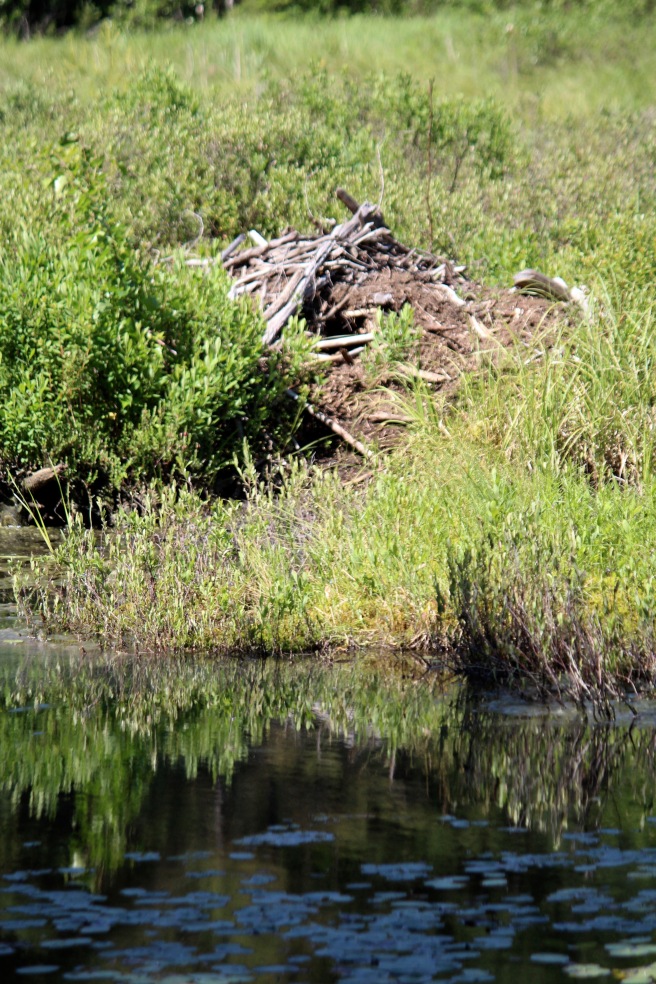 it appeared that someone had stopped by. 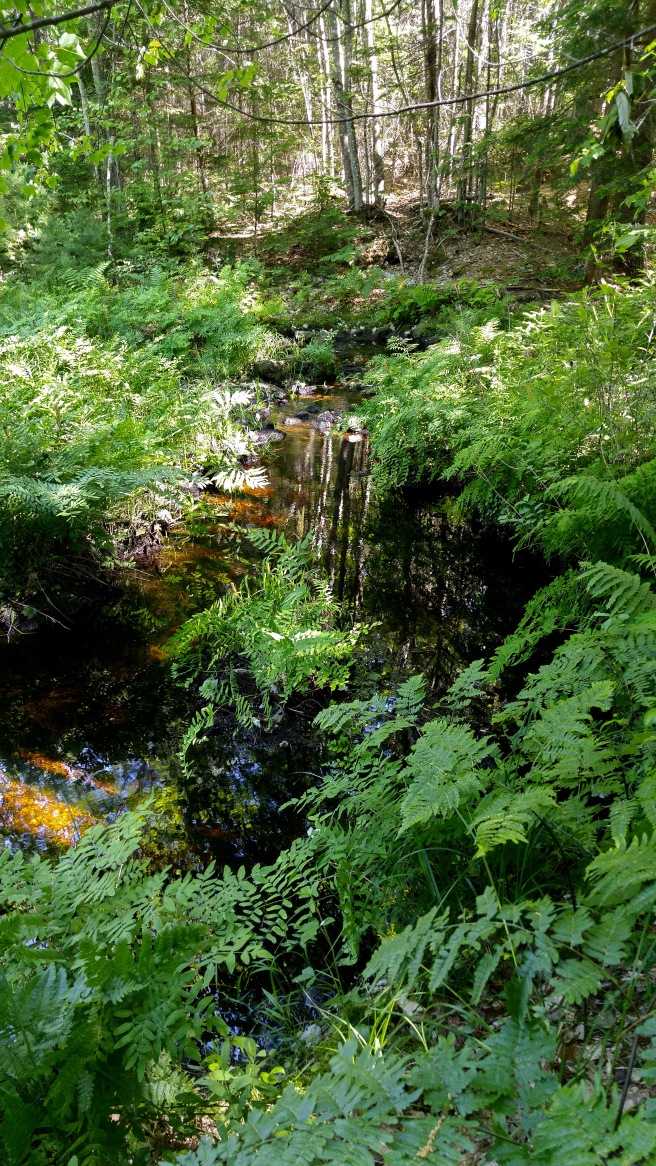 On the other side of the beaver dam, royal ferns decorated the stream in their shrub-like manner. 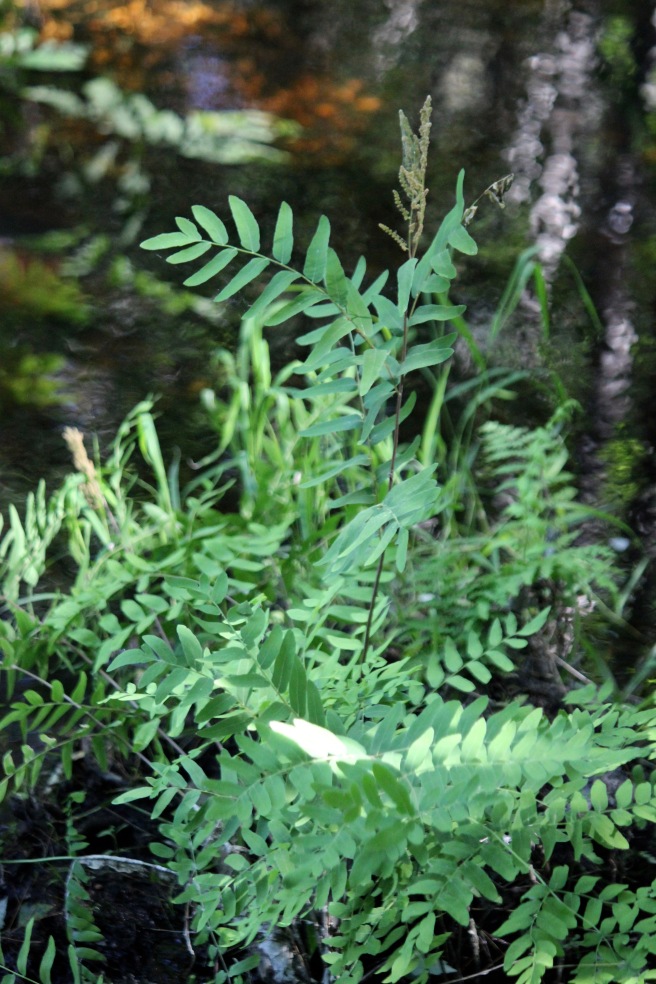 Their fertile fronds posed like crowns above their heads, bespeaking their royalty. 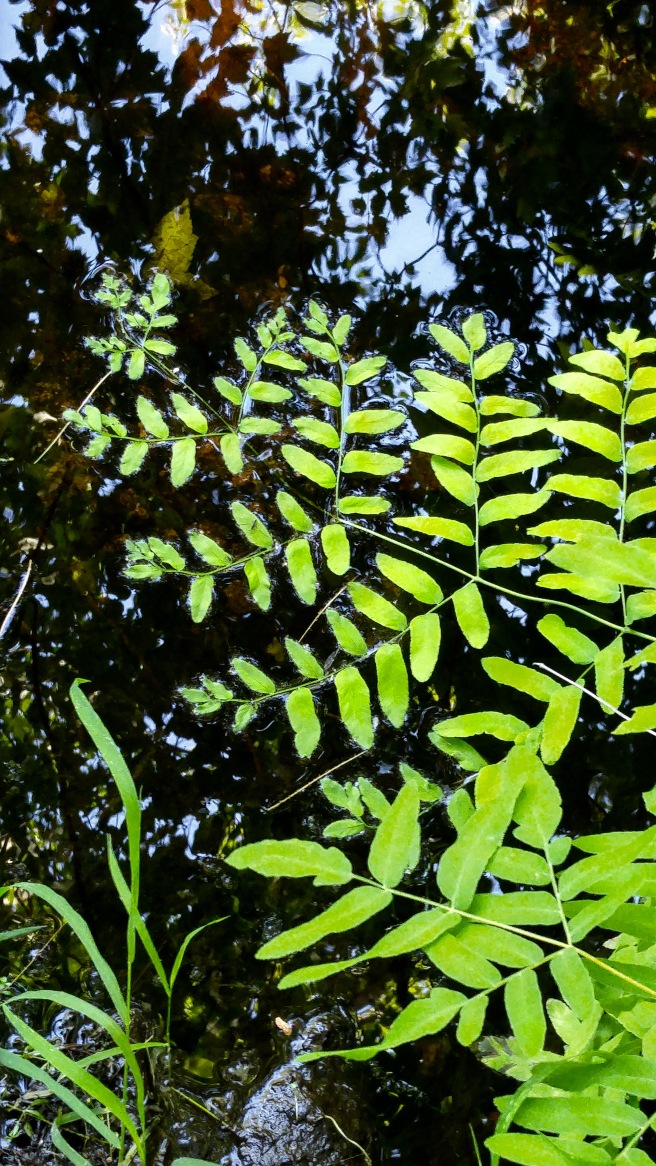 With their unique structure, there is really nothing else that resembles the royal fern. 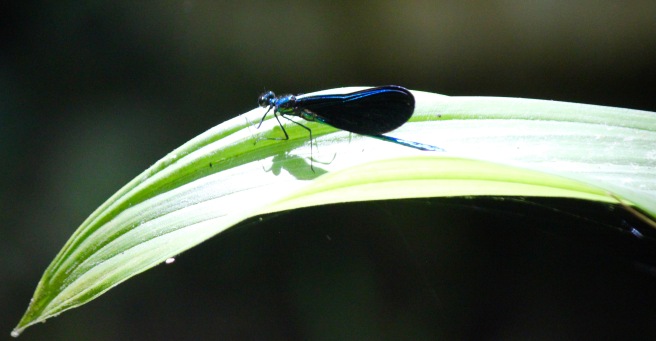 Because we were once again by the water, we realized the jewelwings were abundant–though they seemed more blueish in color here than further down the stream. Was it the lighting? 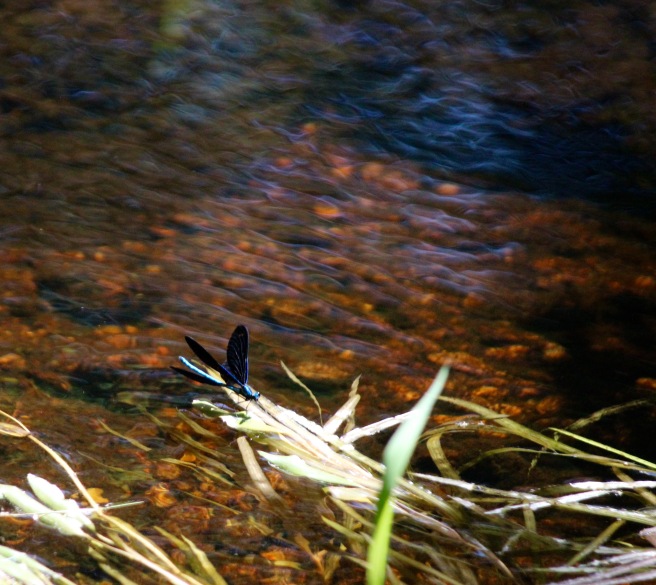 Beside the tranquil stream, they flittered and fluttered, their wings like sails over iridescent bodies, and occasionally they settled on vegetation for a photo call. 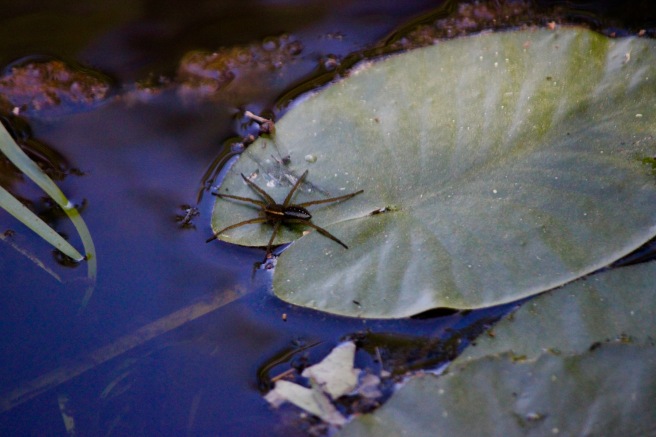 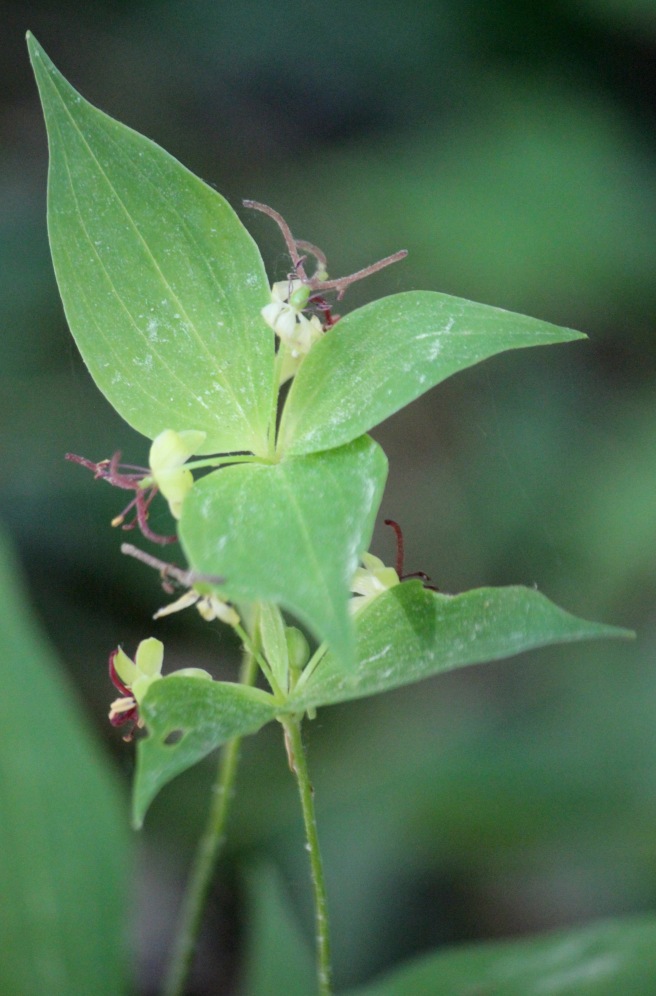 We pulled ourselves away–or actually, Jinnie Mae gently nudged me away and we continued our journey back, certain that we’d see sights we missed on the way down the road. There were Indian cucumbers with multiple flowers–the most I’d ever seen . . . until Jinnie May pointed out that it was really two plants. Oops. 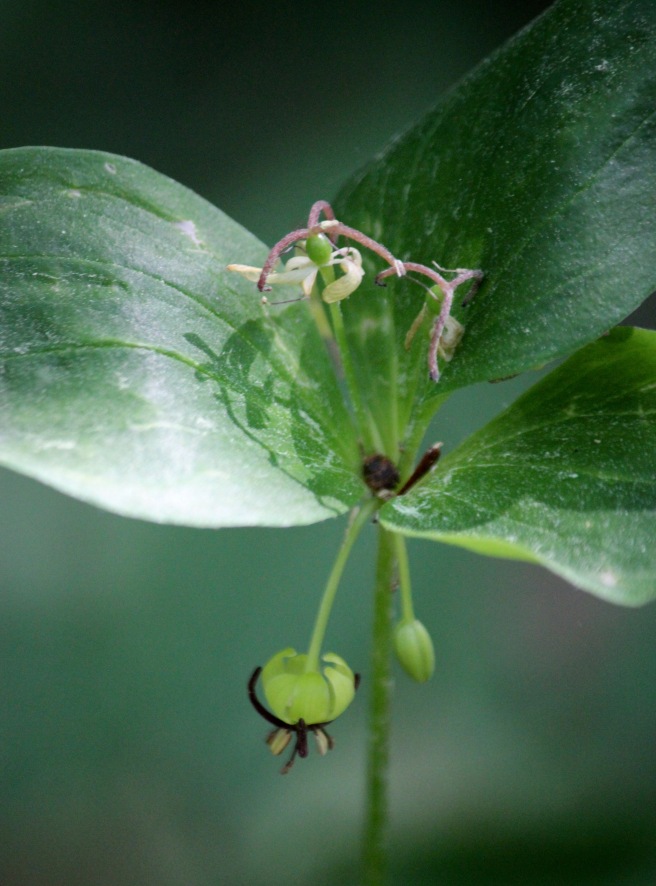 But still, we found one with at least four blossoms, all in various stages. 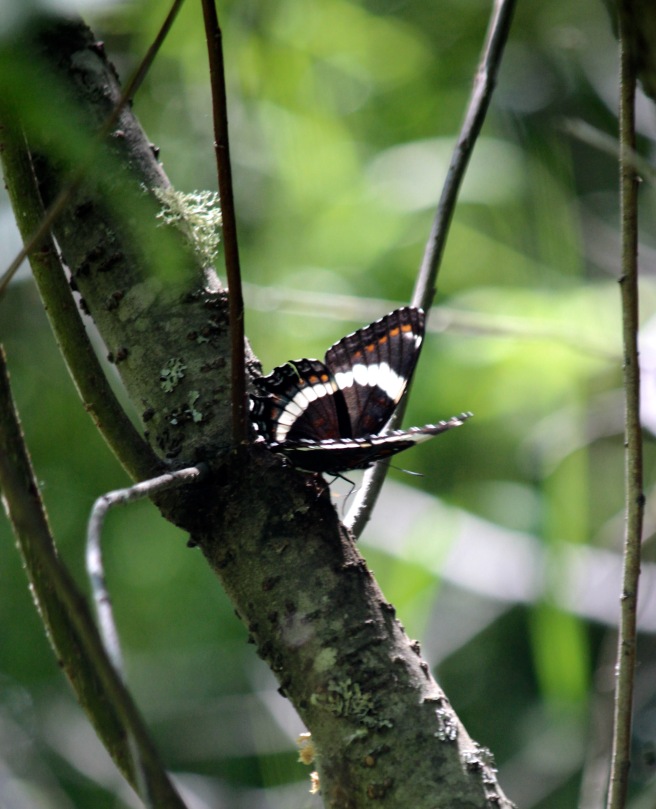 She told me we’d probably see an Eastern black swallowtail. 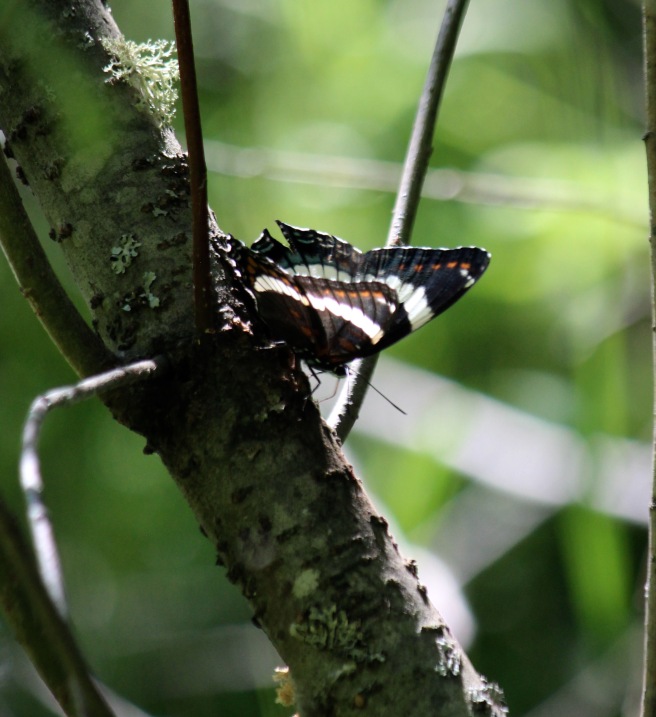 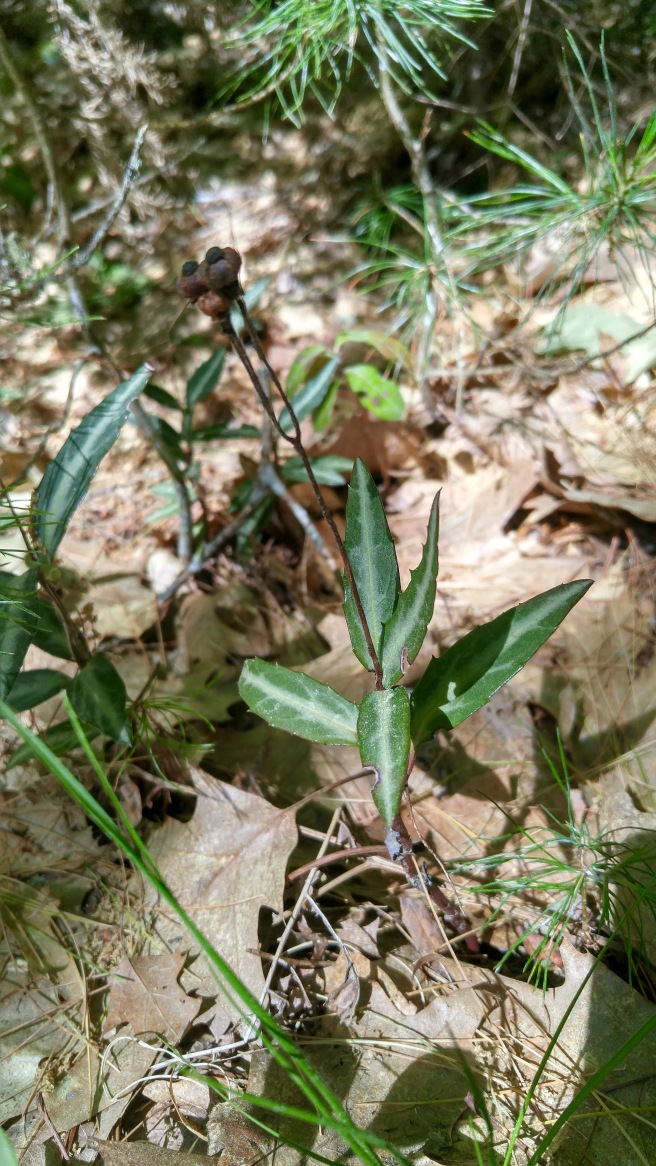 Though it’s not time for spotted wintergreen to flower yet, 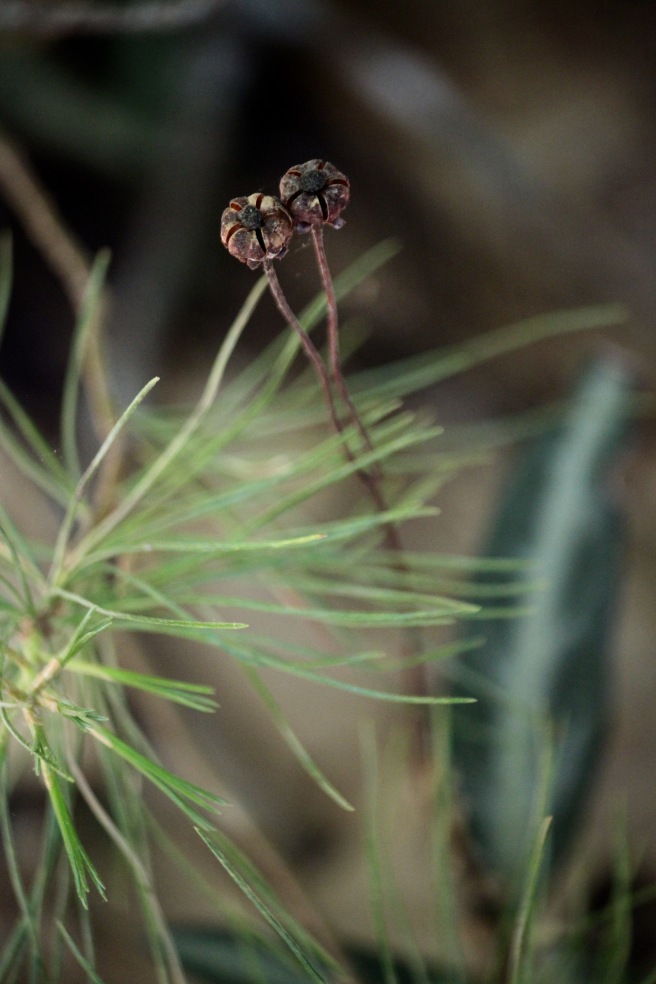 we found its seed pods atop tall stalks. For me, this was a plant I don’t believe I’ve ever seen before. (According to Maine Natural Areas Program’s Rare Plant Fact Sheet, Chimaphila maculata is threatened in our state and has an S2 ranking) Will I see it in other places now that I’m aware of it? Time will tell. 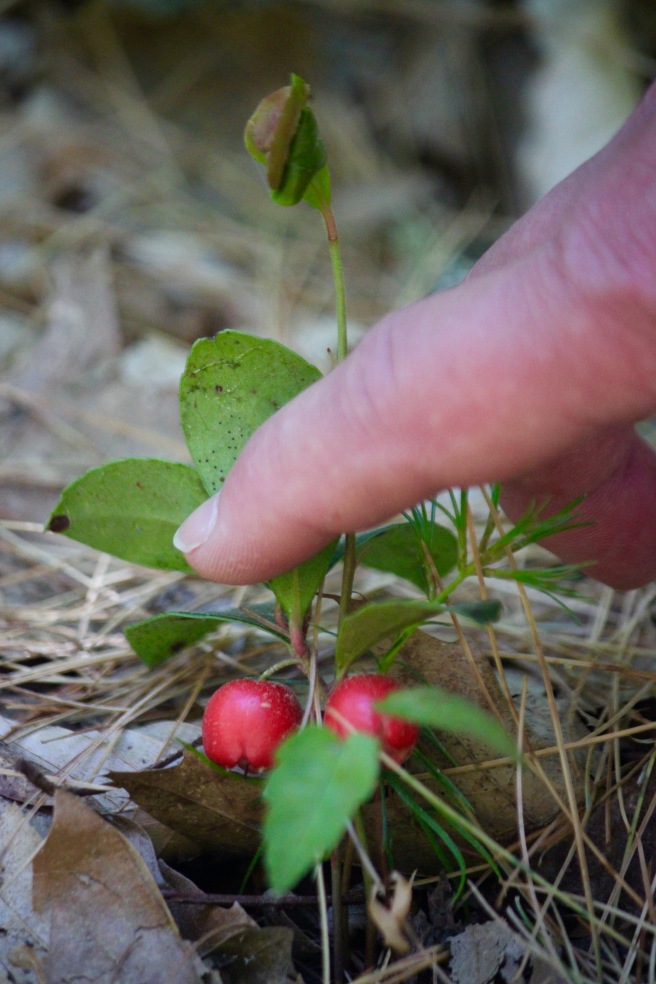 We noticed tender new wintergreen leaves, but it’s the berries that made us turn back for a closer look. 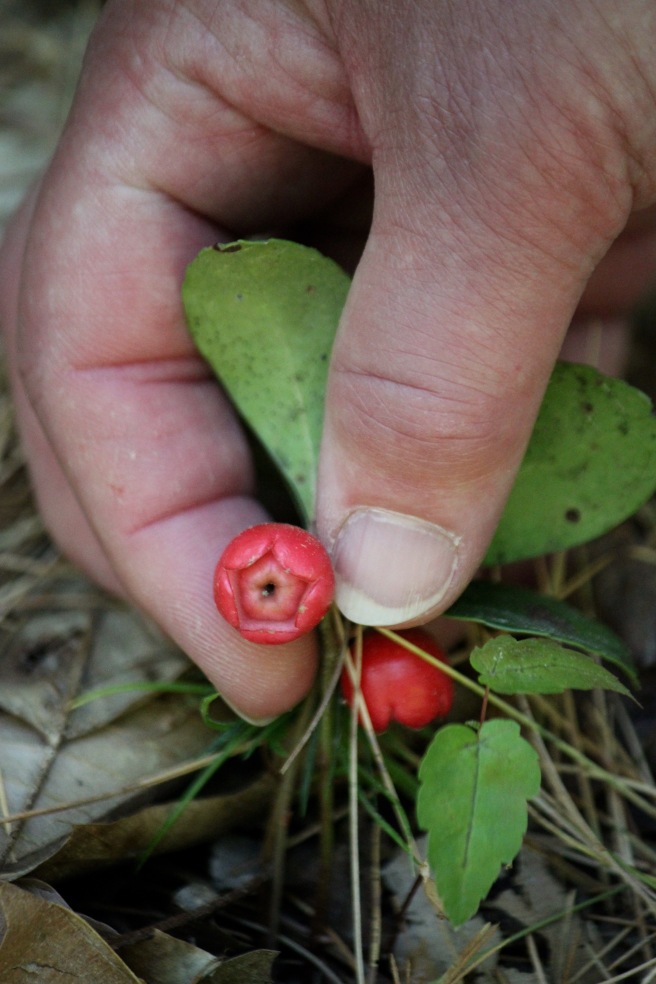 The scarlet berries matured last summer, survived the winter without being eaten (they taste like wintergreen in the summer, but lose their flavor and sugar count over the winter months) and have now become enlarged. 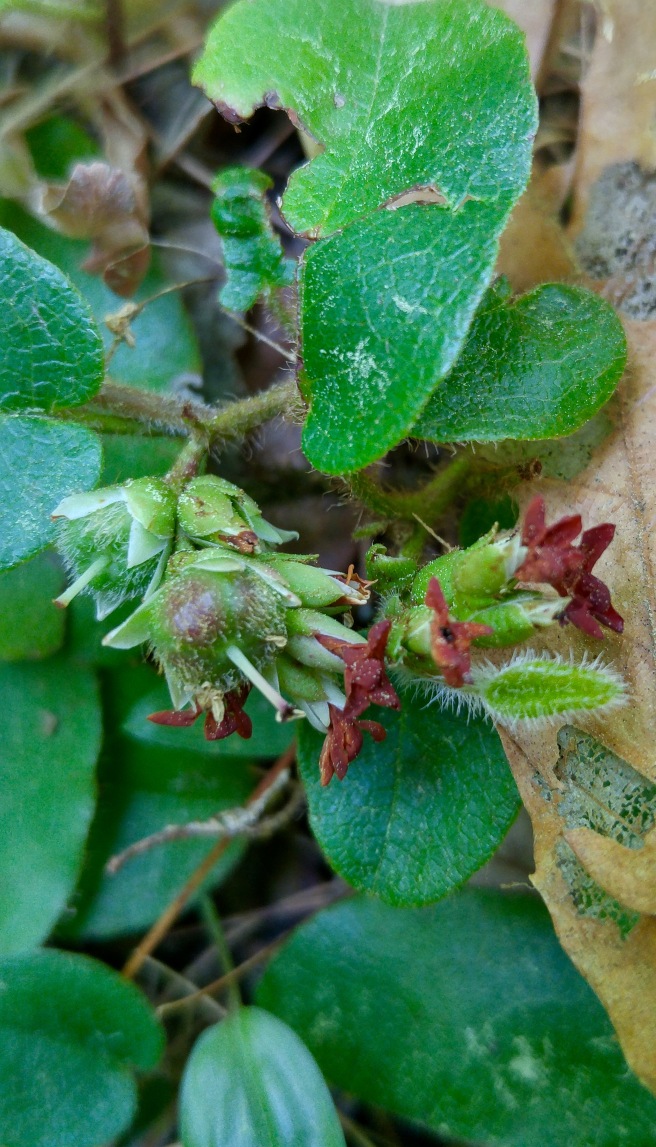 What really stopped us in our tracks–trailing arbutus. Last month, we were wowed by its gentle white and pale pink flowers. They’ve since faded to a rusty tone. 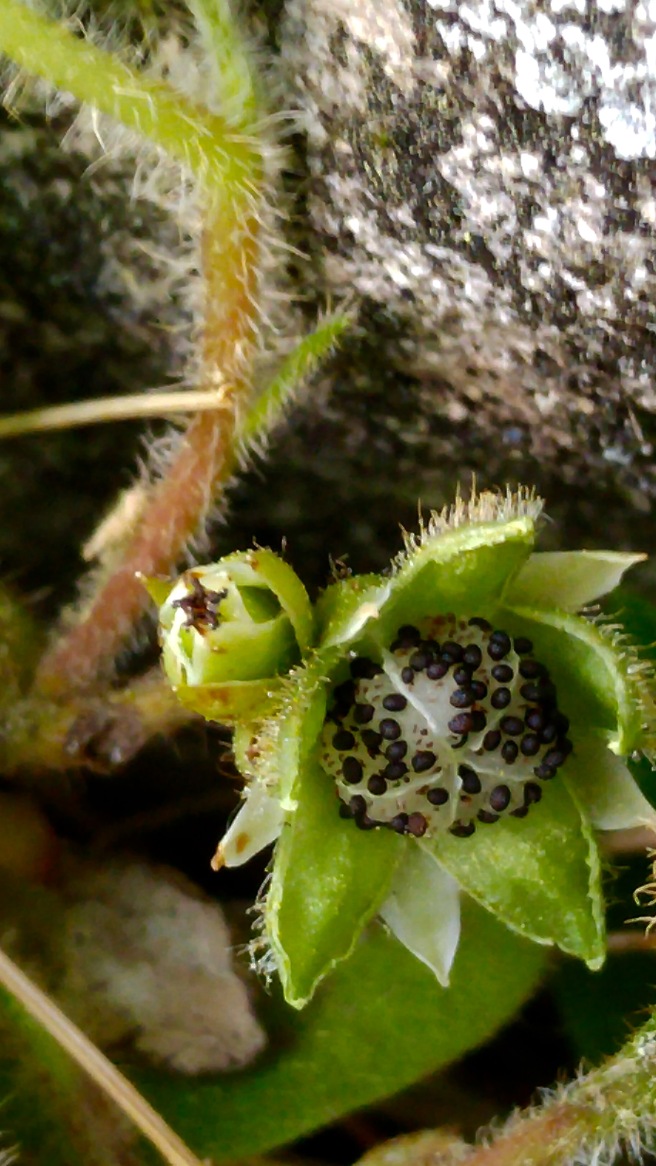 And some have transformed into swollen round seed pods. 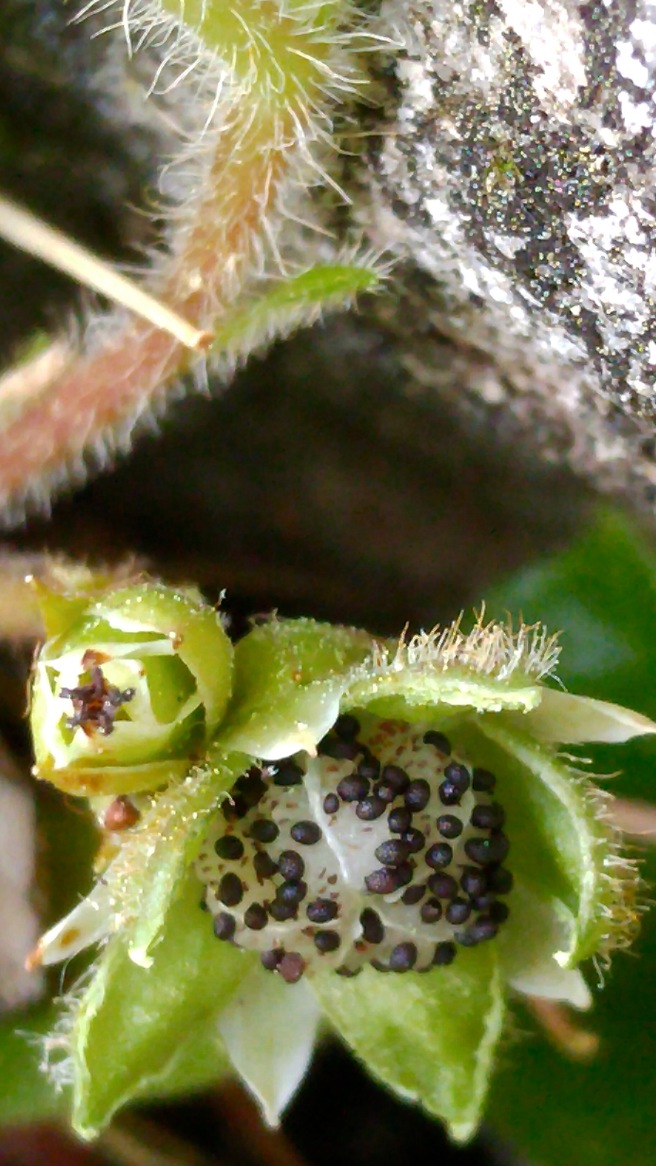 The sepals have curled away to reveal the white fleshy fruit speckled with tiny brown seeds. It was well worth getting down on our knees to look through a hand lens–especially since ants, chipmunks and mice find these to be a delicacy so they may soon disappear.

Paying attention with and without a hand lens on a delightful spring day–we were once again thankful for the opportunity to notice . . . and to wonder.