Sometimes I’m amazed at the wonders that are right before my eyes. OK, more than sometimes.

For the past two years, I’ve noticed this plant as I sat on my porch rocker. The greenish-yellow flower tinged with purple doesn’t last long, but it’s delicate in form. If you look closely, you may see that it’s shaped like a slipper. The pouch of a lady’s slipper? No, but it is a member of the orchid family, thus the similar structure. This is a helleborine, which is actually a non-native.

The hair-covered stem almost looks like it’s been coated with powder. With clasping leaves and that thick fuzzy stem, I keyed it out to Epipactis helleborine, aka broad-leaved helleborine. Strong and beautiful.

Another non-native that is especially common along roadsides right now is rabbit-foot clover. I love this common name for it does look like the good-luck charms we used to have as kids–which were supposed to be a rabbit’s foot. Were they really taken from rabbits? Left or right, front or back?  Which pocket where you supposed to carry it in? And did it actually bring good luck? I don’t know, but the feathery structure and tad of pink among the white and green makes this flower appear as something more unique than common. Delicate and dainty.

A third non-native that I see blooming everywhere right now–Queen Anne’s Lace. Apparently, Queen Anne liked to work with lace and the red dot that you see in the center of the inflorescence represents the blood that dripped when she accidentally pricked herself with a needle. After the flower finishes blooming, its spoke-like branches curl inward and form a “bird’s nest” structure while the seeds develop. Legendary and intricate. 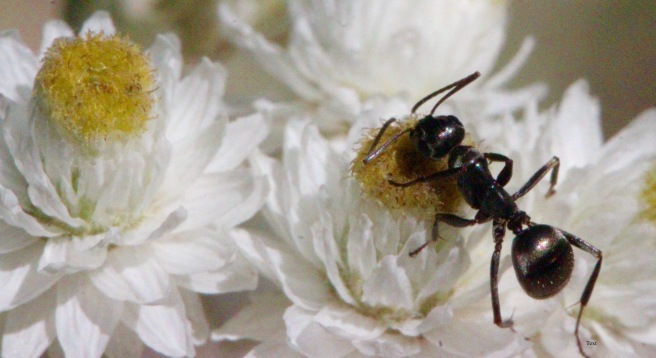 Finally, a native. The flowers of pearly everlasting. And an ant. Notice its body color–shining iridescent in the sunlight. Yes, even ants can be worth a view. And while these flowers may look huge, think about the size of an ant. I just happened to be in their faces. Three cool things about pearly everlasting. First, the white “petals” are actually bracts that surround the yellow disk flowers. (Bracts are usually green and leafy.) Second, the flowerheads do look like pearls and those white bracts remain so that  even after the central disk flowers wilt, the pearl structure continues to exist. (They look great in dried flower arrangements.) And third, the lance-shaped leaves are cottony and have an aqua-white or silvery tinge that makes them stand out among green-leaved plants.  Unforgettable and forevermore.

Morning dew glistened like tiny beads on a sensitive fern frond this morning.

But one of my favorite finds later in the day was the fertile stalks of sensitive ferns. Check out the beadlike structure that houses the spores. These will stand tall all winter, turn a burgundy brown and after the spores are finally released, they’ll take on a lacy look. Notice how the beads appear on one side of the stalk. They look like they could be made of polymer clay. Prolific and creative.

As I was looking about, a pair of marsh bluets demonstrated their mating behavior. He is the darker one and has grabbed onto her thorax behind her head with the claspers at the tip of his tail. She actually has species-specific grooves intended for this. And she has apparently decided he is the one for this moment because she’s lifting her body toward his to form the heart-shaped wheel, meaning she’s ready to receive his sperm. He’ll first check to see if she’s received any sperm from another male, which if discovered, he’ll remove before inserting his own. Once the mating is over, he’ll guard her to make sure no other males happen along. Curious and crazy.

One of my favorite in my face experiences today occurred when this white-faced meadowhawk dragonfly let me enter its personal space. It posed for moments on end and then flew off, only to return for another face-to-face meet and greet. The face of a young one is yellow to begin and changes to white as it matures. While the adult male has a red body, females and young males are yellowish brown. So this is one of the latter two. I swear it smiled at me. I certainly smiled back.

We were smack dab in each others faces–the better to see you, my dear.

4 thoughts on “Smack Dab In Front Of Me”