In late summer/early fall, a variety of goldenrods shower gardens and fields with their sunshiny flowers.

Unfortunately, they’ve been wrongly blamed as the culprits of hay fever, but by the abundance of pollinating insects that visit them daily, it’s clear that they are insect rather than wind pollinated. (Ragweeds and other hay-fever causing species are wind pollinated.)

And so today, as I have for the past few weeks, I spent time focusing on those pollinating visitors and others who find goldenrods attractive for different reasons. Take a look.

What first caught my eye was a bee that dangled upside down. And then I spied the green legs of an assassin bug. What? Yup, an assassin bug.  I believe this one is a nymph. Regardless of age, here’s the scoop: Assassin bugs are proficient at capturing and feeding on a wide variety of prey. Though they are good for the garden, they also sometimes choose the wrong species like this bee. The unsuspecting prey is captured with a quick stab of the bug’s curved proboscis or straw-like mouthpart. Once I saw this, I continued to return for a couple of hours, so stay tuned. 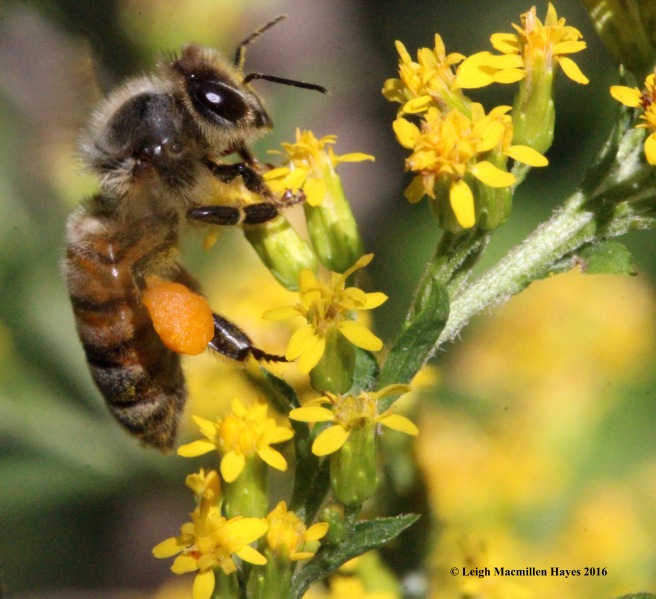 Fortunately, there were other honeybees on the job of pollinating the flowers.

Mighty bumblebees also filled their sacs to the brim.

A.B. Take 2–do you see the proboscis stuck into the first bee’s thorax? It fed by sucking out the fluids. 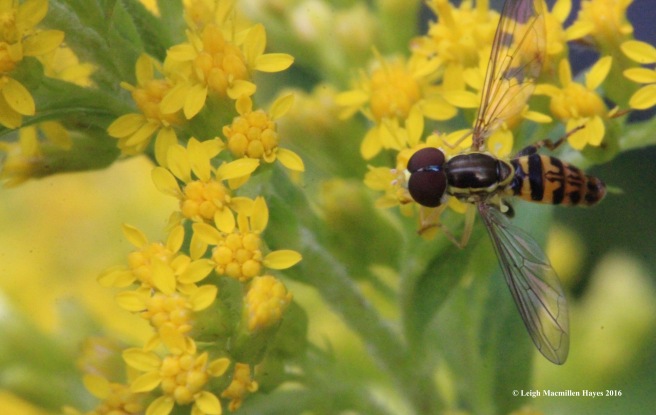 Back to the other visitors. One of my favorites was the hover fly. I’m always humbled by its coloration.

And then there were the wasps.

Their almost hairless bodies provided contrast beside the bees.

A.B. Take 3–The A.B. turned the bee and it appeared that its proboscis became coated with pollen, which would make sense. 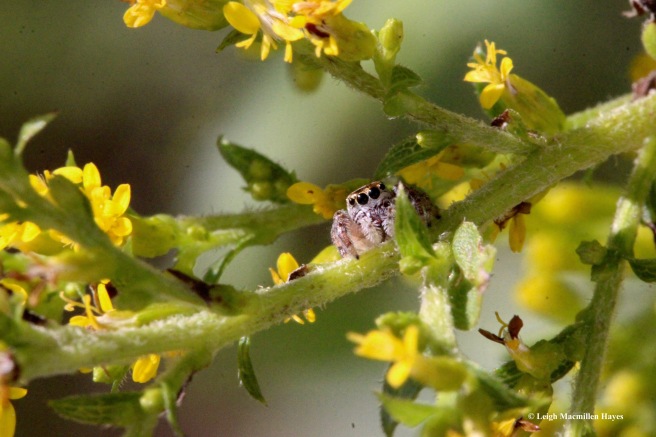 Meanwhile, a jumping spider waited patiently for its own prey to come into sight. I felt like all eyes were on me as we came face to face. Thankfully, it didn’t jump and grab me with its jaws. 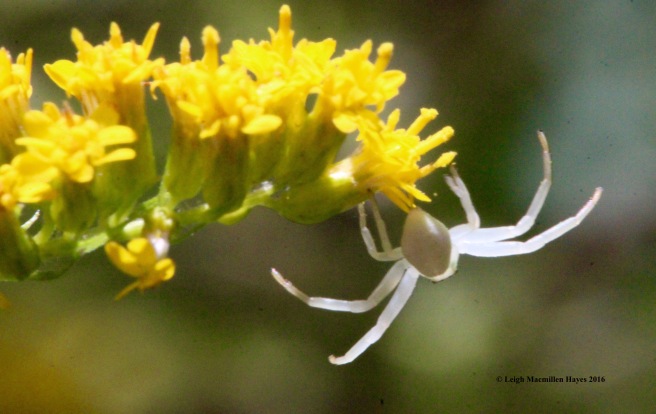 Another with a poisonous bite is the crab spider. This one was more active that most that I’ve seen. Usually, they sit and wait, then catch their prey, bite it and again, suck it dry. And while it looks huge in this picture, it is really quite small–about pencil eraser size.

A third spider species used the goldenrod’s stem and leaves to weave its own structure. It seemed to be more successful than the others at finding a meal.

Not every visitor to the goldenrod knew about camouflage. I don’t know who this is, but saw it on a nearby orange echinacea yesterday. Its mauve color certainly shouted for attention among the yellow sea.

A different caterpillar did a better job of blending in–do you see it?

A.B. Take 5–An hour later and the A.B. was still sucking.

At the same time, another predator hid among the flowers–an ambush bug.

This species is otherworldly at best. 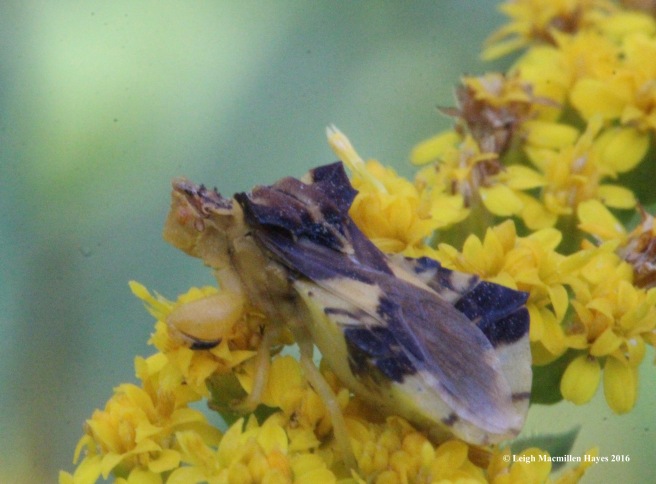 And talented. The ambush bug waits patiently and then snatches prey with its knife-like pincers. All but the outer shell of the prey is consumed. I swear this guy was smiling. Maybe he’d enjoyed a feast and I’d missed it.

A.B. Take 6–About two hours after I’d first observed it, I returned and couldn’t find the bee. Then I noticed a motionless body on a flower branch below. Apparently A.B. had sucked all the life out of it and then let it go. 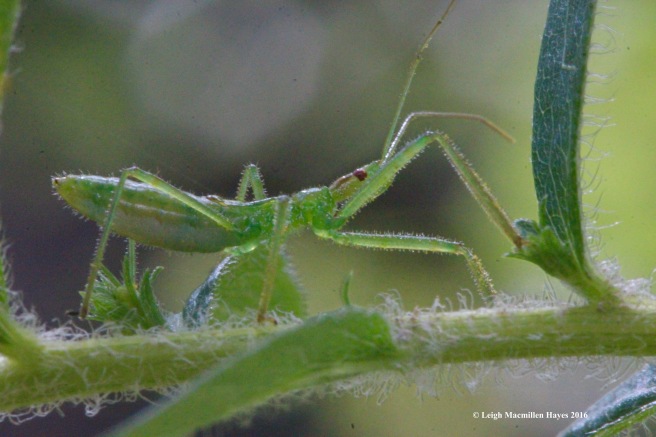 A.B. The Final Take–It had finished taking and went in search of another victim.

What I know for sure: While goldenrod may rule the late garden, it is also ruled by many in a bug-eat-bug world. All of it is worth a wonder.