I ventured this afternoon with my friend Marita, author of  Hikes and Woodland Walks in and around Maine’s LAKES REGION, along with her daughter’s beagle, Gracie, on a new trail in Fryeburg. 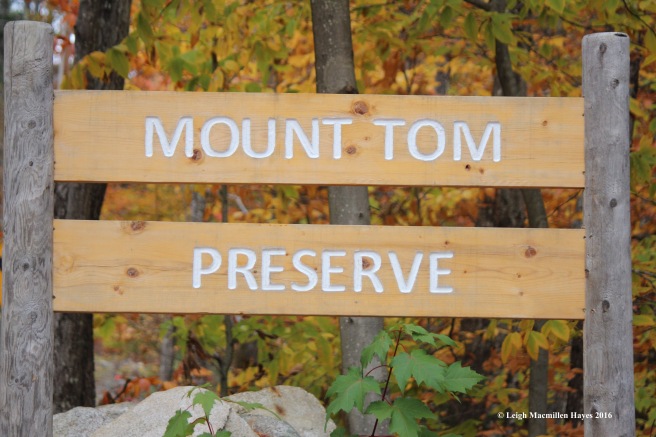 Mount Tom, a Roche Moutonnée, is an asymmetrical hill with a gently sloping up-ice side that has been smoothed and polished by a glacier. The other side is abrupt and steep–the down-ice side where the rocks were plucked off, leaving a more cliff-like appearance. As Marita noted, its most impressive view is from a distance, but today we sang its praises from up close. We’ve both hiked a 1.5 mile trail to the summit for years, but recently The Nature Conservancy developed a new trail that we were eager to explore.

Within seconds I was exclaiming with joy. A huge, and I mean HUGE foundation shared the forest floor. Note the outer staircase to the basement.

And the large center chimney. 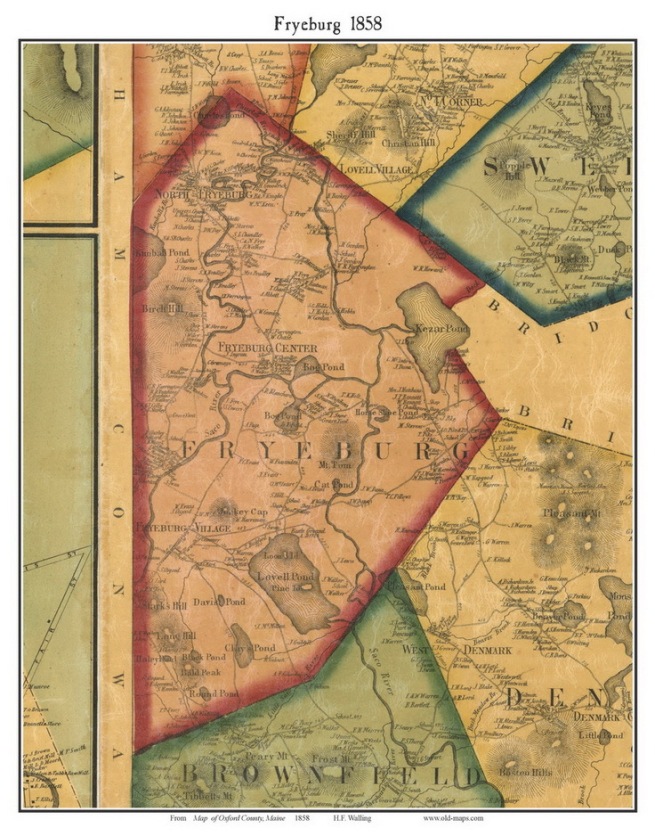 On an 1858 map, I found that A.H. Evans owned a home in about this vicinity, but I don’t know if this was his. Or any more about him. It will be worth exploring further at the Fryeburg Historical Society.

The house extended beyond the basement.

And was attached to an even bigger barn.

Ash trees grow beside the opening, but I wondered if we were looking at the manure basement.

Finally, we pulled ourselves away and returned to the trail. Well, actually, we tried to return to the trail but couldn’t find it. So we backtracked, found this initial blaze and again looked for the next one. Nothing. Nada. No go. How could it be?

That didn’t seem right, so we decided to follow our noses, or rather Gracie’s nose, and sure enough we found the trail. If you go, turn left and cross between the house and barn foundations. 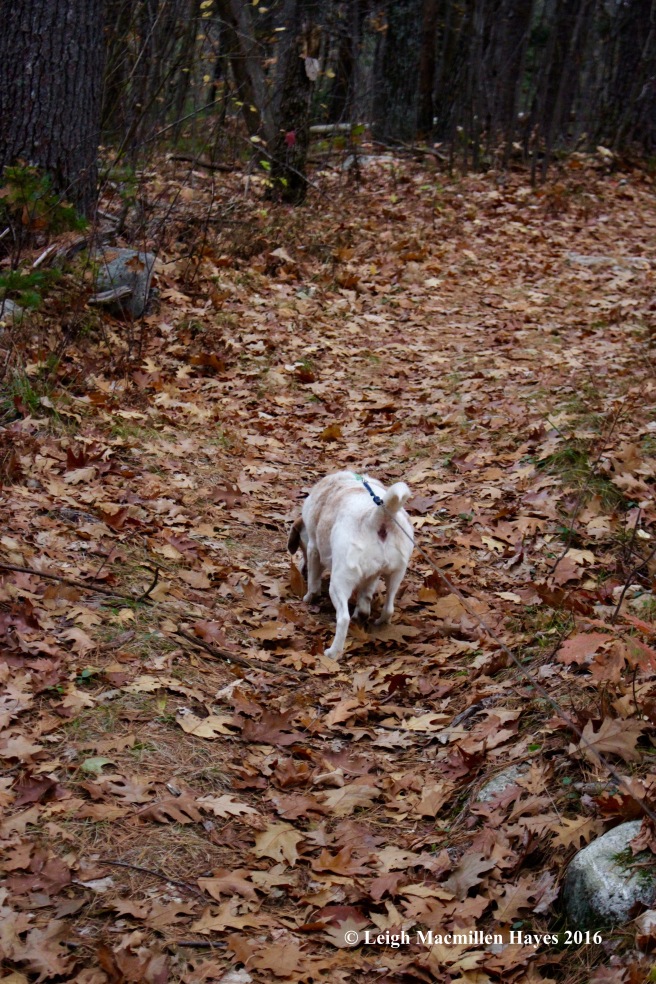 After that, for the most part, we were able to locate the trail, but it was obscured by the newly fallen leaves and could use a few extra blazes. Gracie, however, did an excellent job following the scent of those who had gone before and leaving her own.

The path took us over a large mound of sawdust, something I’ve found in several areas of Fryeburg.

The predominate trees were beech, white and red oaks, thus providing a golden glow to the landscape.

And then we came to the ledges. Bobcat territory. Note to self: snowshoe this way to examine mammal tracks.

The trail was situated to provide a close up view of the ledge island, where all manner of life has existed for longer than my brain could comprehend. Life on a rock was certainly epitomized here. 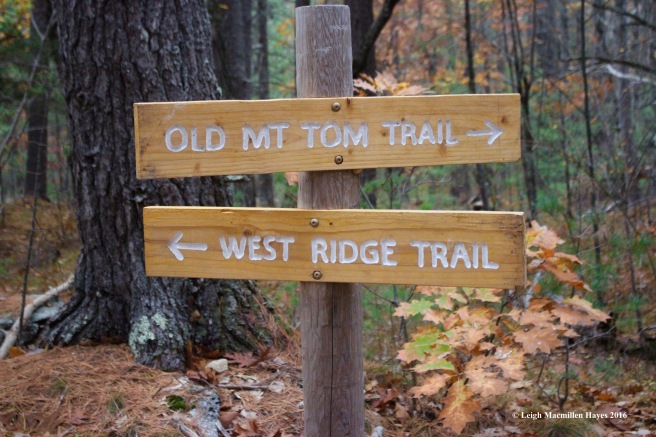 We continued our upward journey for over 2.3 miles (thanks to Marita’s Fitbit for that info) and eventually came to the intersection with the trail we both knew so well.

From there, we walked to the summit where the views have become obscured by tree growth.

But . . . we could see the long ridge of Pleasant Mountain in front of us,

Kezar Pond to our left, 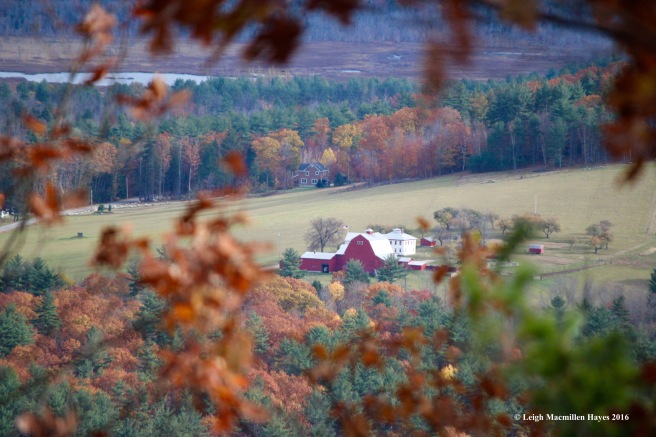 and the Richardson Farm on Stanley Hill Road to our right.

Also along the summit trail, the woody seedpod of a Lady’s Slipper. Ten-to-twenty thousand seeds were packaged within, awaiting wind dispersal. 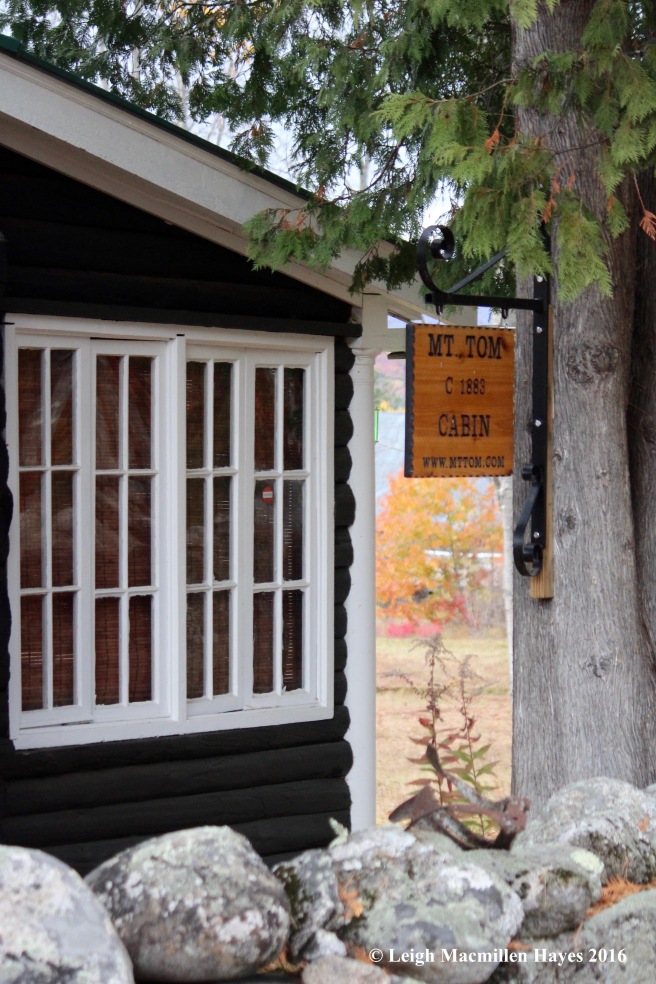 We decided to follow the old trail down, which passes through a hemlock grove and then suddenly changes to a hardwood mix. Both of us were surprised at how quickly we descended. And suddenly, we were walking past some private properties including the 1883 Mt. Tom cabin.

The cabin sign was actually attached to a Northern White Cedar tree. I’m forever wowed by its bark and scaly leaves.

In the field beyond, Old Glory fluttered in the breeze.

And just before Menotomy Road, we spied Mount Kearsarge in the distance.

Since we’d taken the loop trail approach rather than an out and back on the same trail, we had to walk along Menotomy Road, so we paid the cemetery a visit and checked out the names and ages of those who had lived in this neighborhood.

One of the older stones intrigued me with its illustration. I think I would have enjoyed getting to know these people. 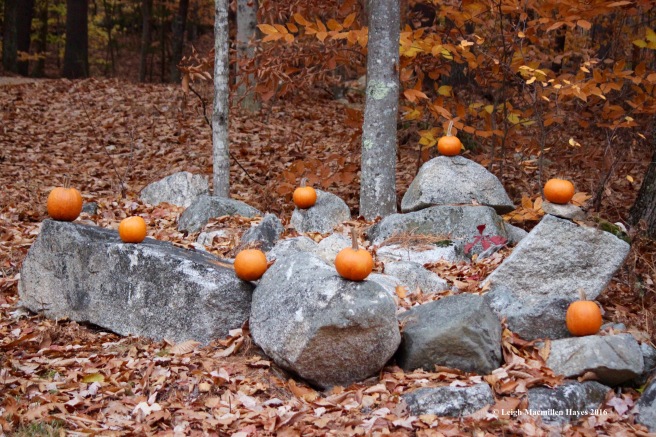 As we continued on, I was reminded of recent adventures in Ireland  and the realization that we notice more when we walk along the road rather than merely driving by. We both admired this simple yet artful pumpkin display. 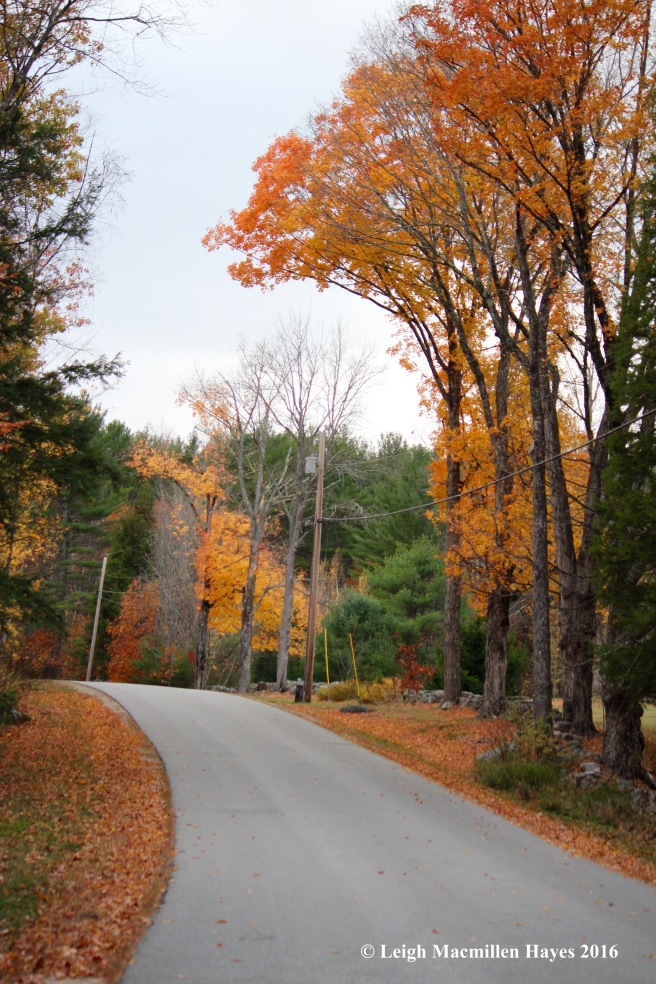 If you go, you might want to drive to the old trailhead, park your vehicle and then walk back to the West Ridge Trail. We parked at the latter and had to walk the 1.5 back at the end, when it seemed even longer. But truly, the road offers its own pretty sights and the temperature was certainly just right, even with a few snow flurries thrown into the mix, so we didn’t mind. We were thankful we’d found our way along the new trail and revisited the old at Mount Tom. And I’m already eager to do it again.