It’s not every day one walks down the street with a house, but that’s exactly what many of us did yesterday as the Rufus Porter Museum was relocated from North High Street in Bridgton to Church Street.

The Rufus Porter Museum and Cultural Heritage Center was founded in 2005 to showcase the folk art history of the area, with an emphasis on Porter’s work. The mission of the museum is to “celebrate the life and times of a remarkably creative American genius who worked throughout Maine, New England and beyond.”

Rufus was an entrepreneur who painted miniature portraits, as well as highly-prized wall murals that are still in houses throughout New England. Besides being a traveling folk artist, he was an inventor, musician, teacher, and founder of Scientific American magazine.

Among his inventions was a horse-powered boat. And he tried to develop an airship that would take people from the East Coast to California in three days. 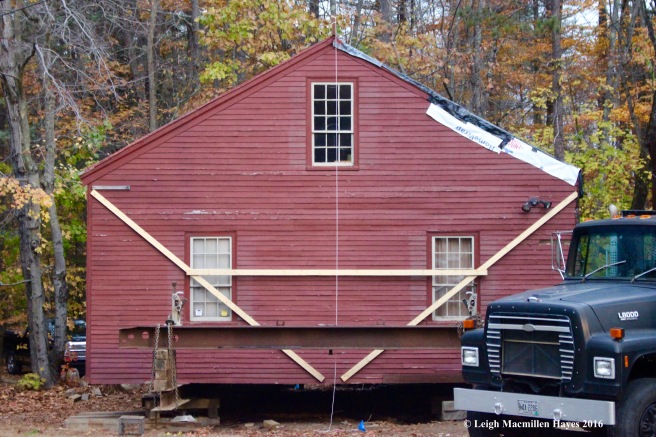 Folk art collectors Julie and Carl Lindberg had the foresight to save much of the material culture of the Bridgton area, including the work of Porter and his apprentices, and chose to give back by sharing their collection with the community and supporting the Rufus Porter Museum in its infancy. And now, the museum is on the cusp of growing. While it has been housed in a red Cape on North High Street, which the Lindbergs made possible in order to share murals and other pieces of decorative arts, yesterday it was in transition to a larger space. 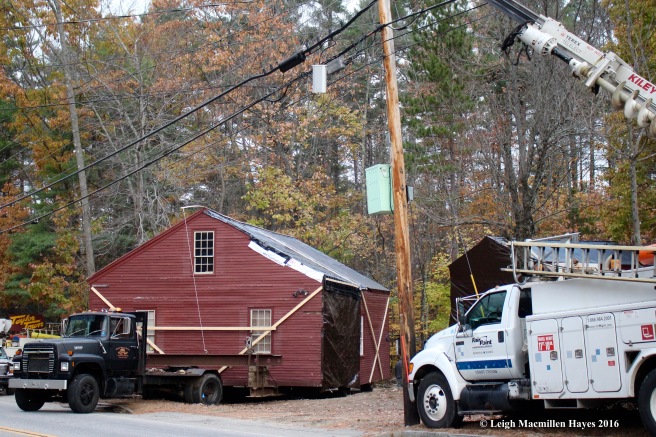 The move was a huge undertaking, despite the fact that the over 200-year-old house was moving less than a mile down the road. 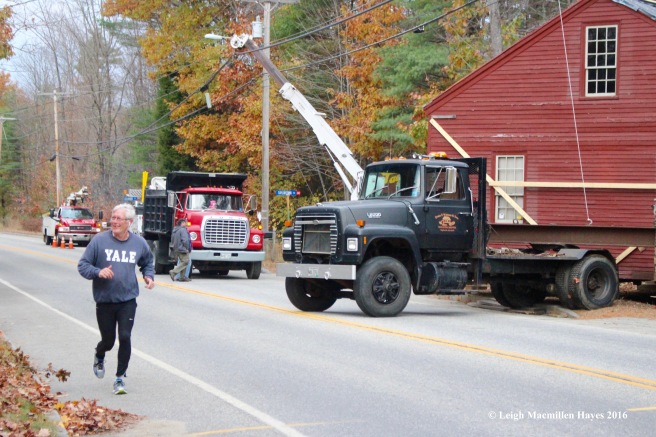 While a crowd gathered to watch each inch of the journey, my guy returned from a morning run. He’s training for the Moose Pond Half Marathon, a fund raiser for Shawnee Peak’s Adaptive Ski Program. As is his style, he thanked everyone for coming out to cheer him on. (The race is on Saturday, Nov 5, if you really do want to cheer him on.)

Over an hour later, Rufus Porter’s works were on the move. 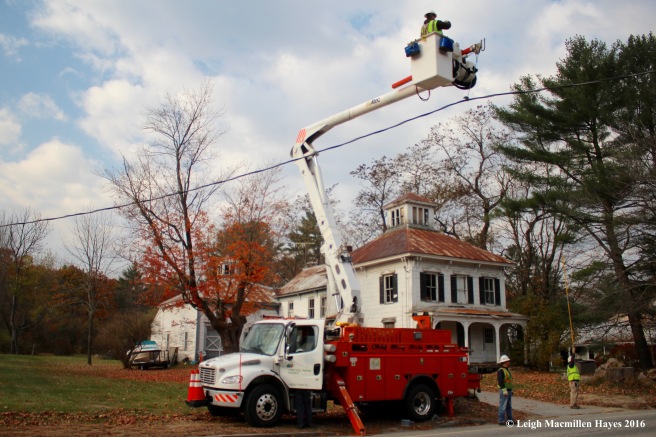 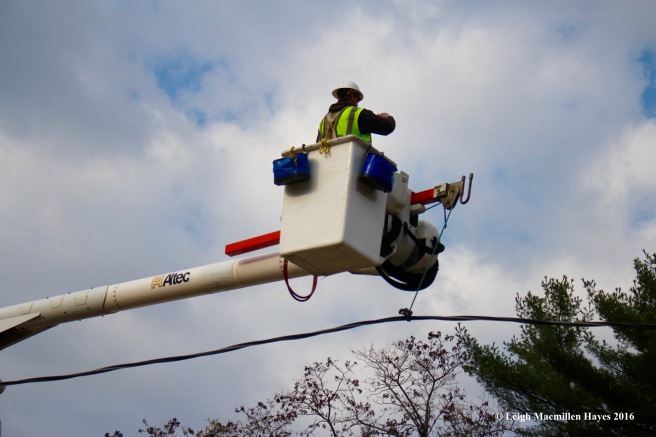 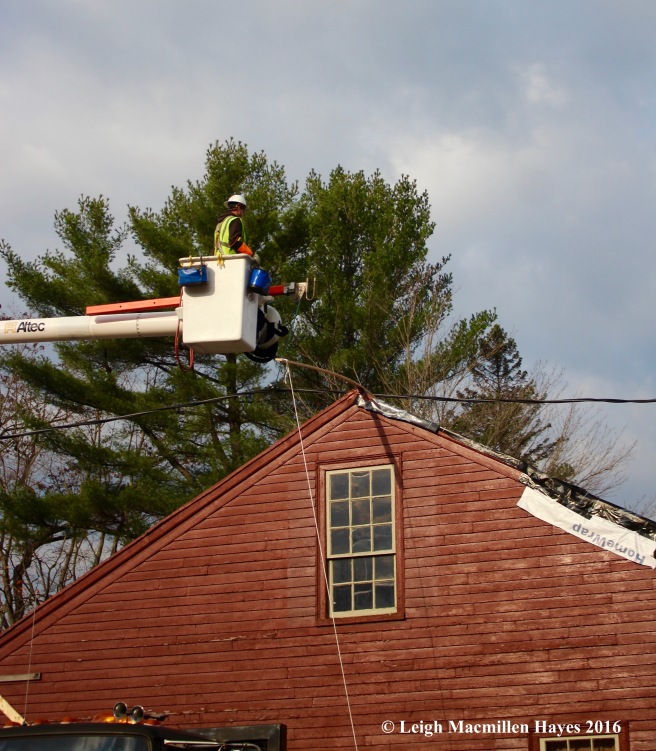 While Cole Watson (a former student of mine) drove and his father, Dana, walked beside, workers from Central Maine Power and Fairpoint checked wires and trees along the route.

There were only a couple of snags, which were quickly resolved.

The town came to a standstill for this momentous journey. It’s not every day a house winds its way down the road.

Beside the Civil War Monument forward motion paused for a bit. 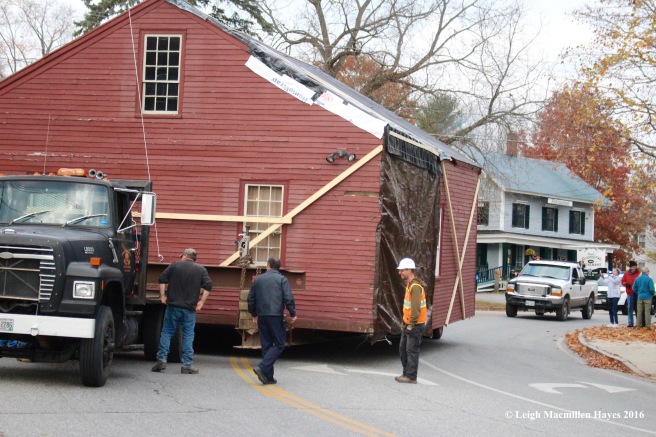 Many of us became sidewalk engineers over the course of the day, something Rufus Porter would have embraced, as we tried to determine the next steps. Main Hill was our main concern. What if . . . Some had visions of failing brakes and a mad dash down Main Street to Food City. Others had visions of the mill pond at the bottom of the hill coming into play. Fortunately, the Watsons had it all figured out and this was just another work day for them. They chained a second truck  to the back of the rig before the journey continued.

As if a routine performance, all went well and Cole maneuvered around the bend by Shorey Park. 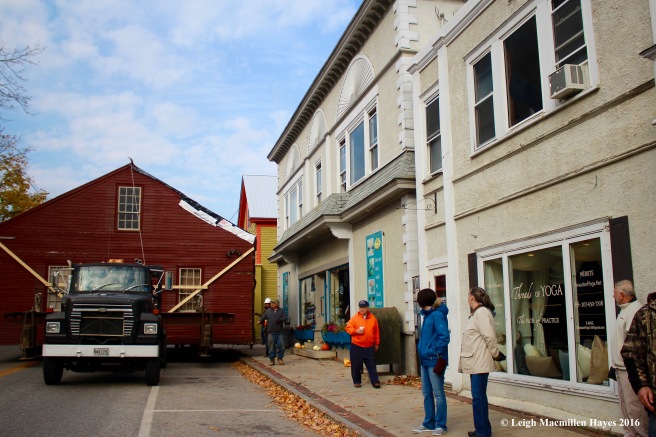 On Main Street, he pulled left to avoid overhanging trees, making for a snug journey beside the Hayes Block.

And then it was time to pause again so that Cole, Eric Wissman (the contractor in charge of building renovations) and Dana Watson could make adjustments to the wheels before the final turn. 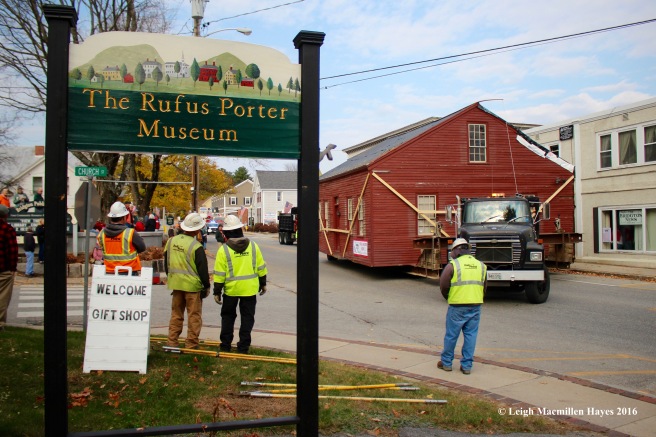 The Cape was headed to the back part of the lot behind the 1842 Webb House at 121 Main Street. 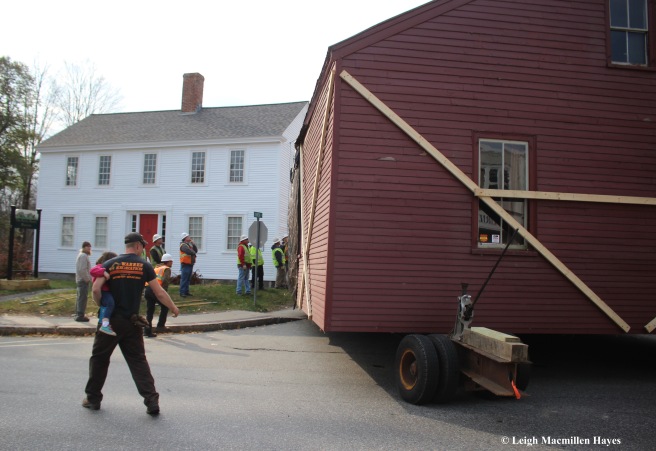 Turning onto Church Street proved the tightest squeeze of the entire operation.

In honor of the arrival of its new neighbor, the library threw a party in the courtyard. 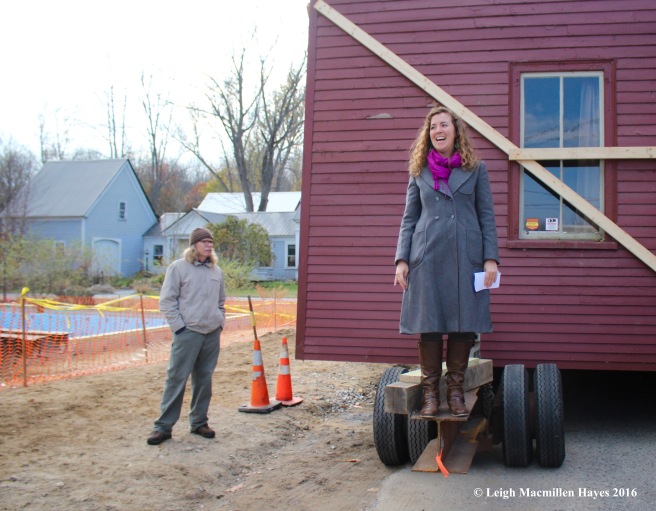 Before the shift toward its new foundation, the Reverend Emily C. Goodnow, pastor of Bridgton’s First Congregational Church, invited the crowd to gather  round for a house blessing.

Many raised their hands to the Cape as Pastor Emily spoke of the building’s history, including the fact that it was built for the Reverend Nathan Church, Bridgton’s first minister, and blessed its future.

Then the real work began–the shift from transient to permanent. 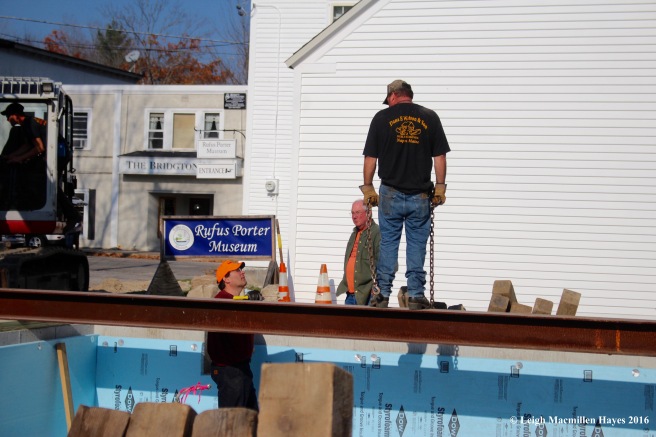 Like he’s been doing it all his life, because he has, Cole walked the beam with confidence.

The chain was secured and Kyle Warren moved the beams to their placement under the house.

Skates, as they are called, were placed on the beams, the one on the left to be used in front, and the right one for the back.

After laying cribwork, checking measurements and making sure all was level, the first leg of the shift began. 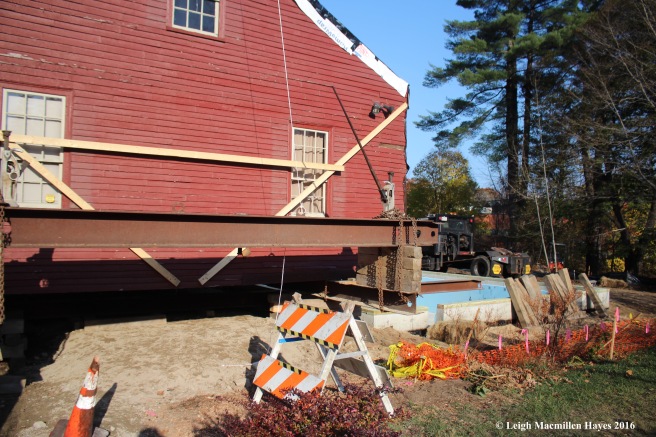 By 3pm, the house stood at the edge of the foundation.

The Watsons decided to call it a day as it would take at least two more movements to get it into place. And so, while the house isn’t officially in its new space yet, it is well on its way.

And for all of us who had the opportunity to observe the move, it was a day well spent. It was a day to make history and recall history. It was a day for community as witnessed by all those who came out to watch and chat and speculate. It was a day to renew old friendships and meet new people.

It was an honor to walk with Rufus Porter and trust he would have appreciated the efforts of all. This was a man, who in the 1840s, could look at a problem and find a solution or any number of solutions to make things more efficient. I think he most certainly would have enjoyed the journey.

14 thoughts on “Walking With Rufus Porter”