Ever since I first saw a photo of a family donning their Sunday best and standing on rocks that form the “Devil’s Staircase” in Lovell, Maine, I’ve been intrigued.

The photo and description on Lovell Historical Society’s Web site refers to a “staircase” on Sabattus Mountain. And so for years I imagined the staircase leading to that summit, but never located it. And then I learned that a section of trail at the Greater Lovell Land Trust’s Heald and Bradley Pond’s Reserve had earned the same name. Is there a staircase at Sabattus? Or was it accidentally misidentified? Whatever the case, when I suggested to my guy that we attempt the staircase off Route 5, he embraced the opportunity. (I’ve since learned from several friends that indeed, there is a staircase on Sabattus and the photo likely was taken there. The base of the staircase is apparently on private property and no longer a safe climb.)

And so about noon we ventured forth and figured out a direction that would take us up the steep portions of the trail to the staircase and El Pulpito, and then down the easy trail–with hope that there was such a thing as an easy trail.

Actually, at the start it all seemed quite easy as I followed our Monday tradition of racing to keep up.

We chuckled when he found an arrow that aimed heavenward–perhaps a sign that all would be well.

My guy played spin the arrow to set it toward our destination. (Actually, on the way down, he spun it the other way. Note to GLLT–perhaps this arrow needs two nails.)

Minutes later, we approached the ledges and visions of bobcats danced through my head.

Acting as our scout, my guy contemplated the upward advance. 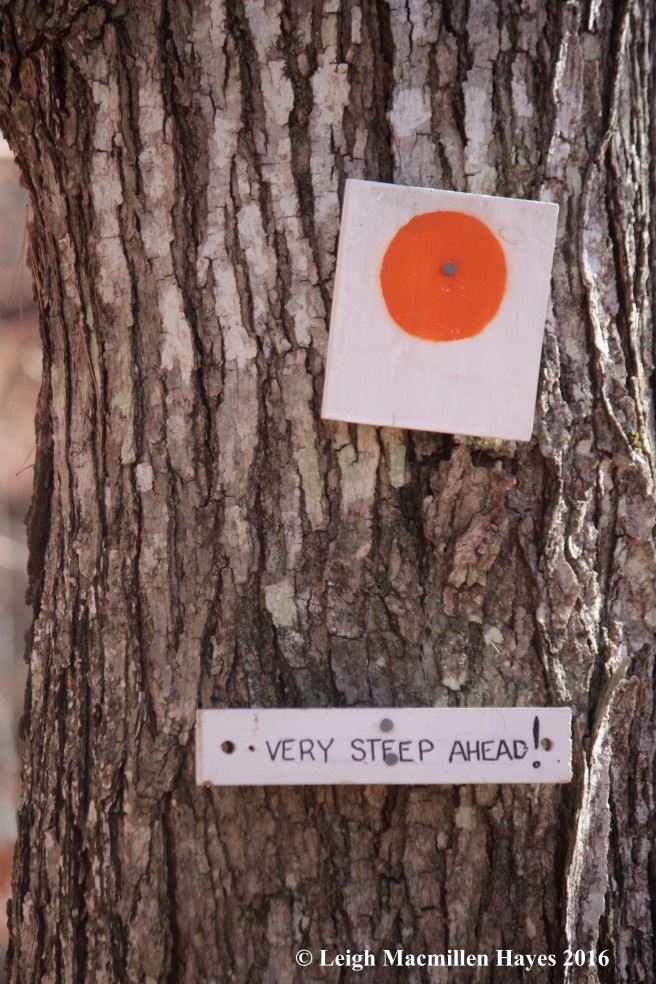 We were forewarned and chose to bypass a bypass.

He started up what we believed to be the same trail traveled by those Sunday venturers. 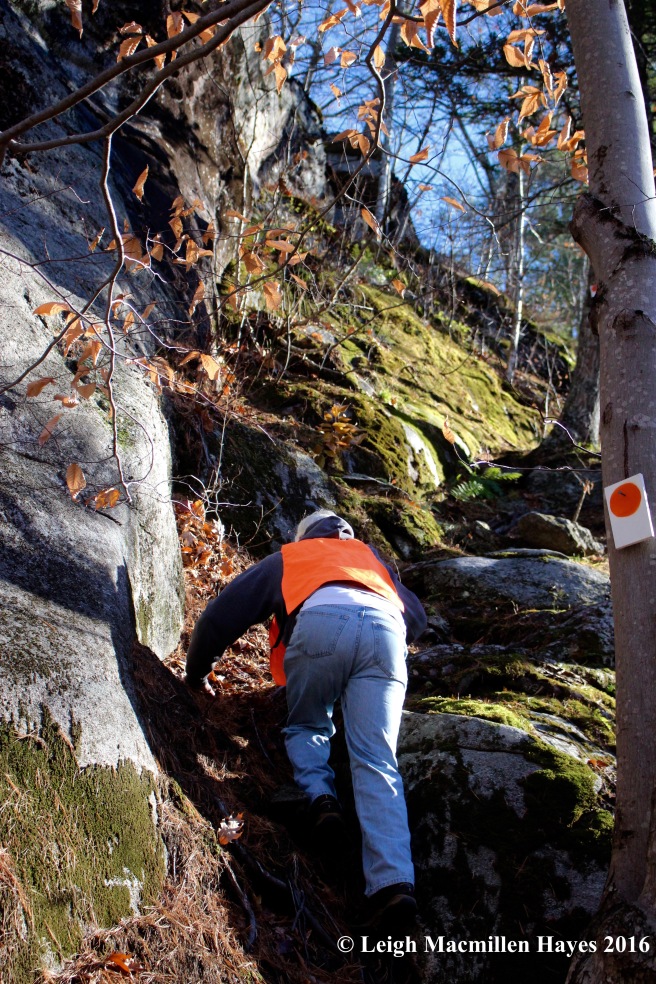 I followed but not quite as speedily.

My heart pounded in Edgar Allen Poe manner as I followed him up. I have to admit that there was a point where I wanted to turn around and climb down, but wasn’t certain that would be any easier. And so after pausing for a few moments, I tried to put mind over matter and placed my hands and feet in what seemed to be “safe” spots as I continued to climb.

Above the staircase we were rewarded with a vantage point of Kezar Lake and the White Mountains and a chance to slow down our heartbeats.

And later, at El Pulpito, the pulpit, the complete opposite of the Devil’s Staircase–a place to pause, eat PB&J sandwiches, and contemplate life in a relaxed manner. 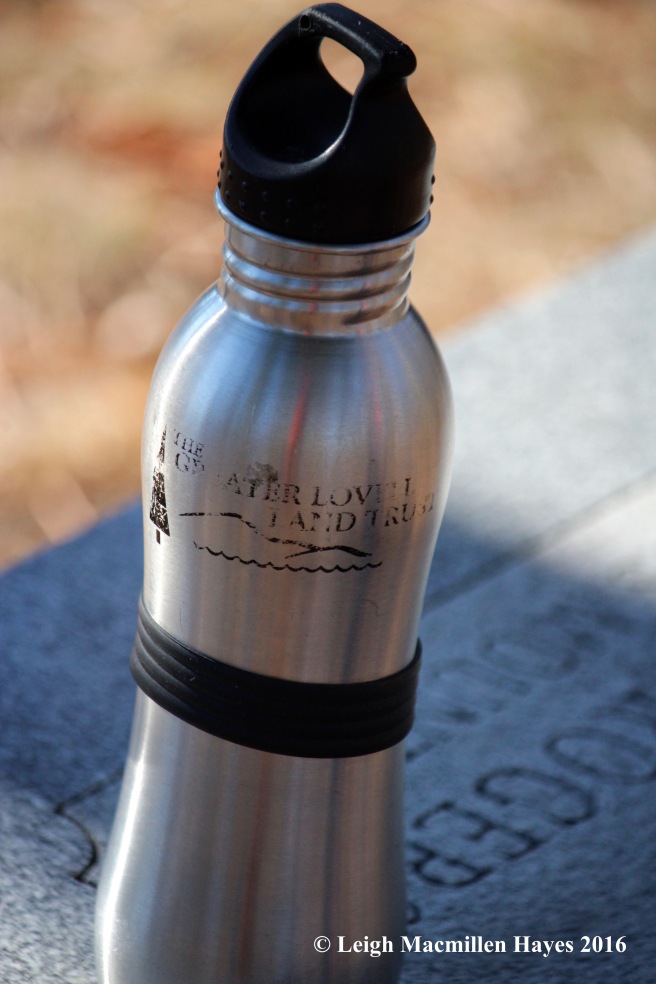 Within an hour we reached the summit of Amos Mountain and spent some time being.

Though the sun was in our eyes, the view south was a bit hazier than one would expect on a clear November day. We later learned that a forest fire burned in Albany, New Hampshire.

For our descent, we followed the blue blazes of the Amos Mountain Trail. 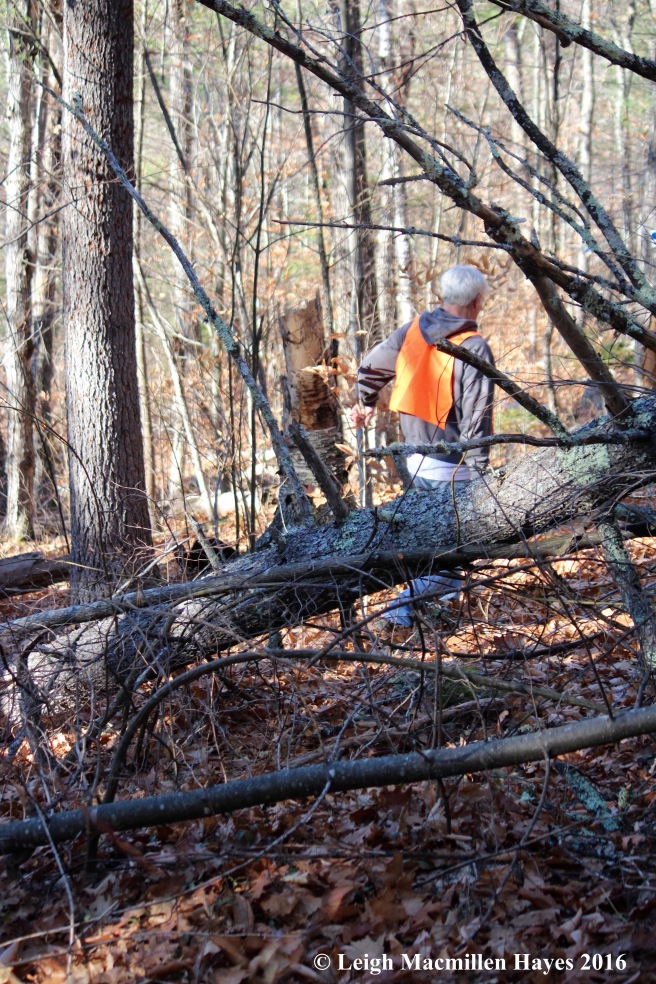 Though hardly as steep as the climb up, I was thankful for a few downed trees that slowed my guy–momentarily. 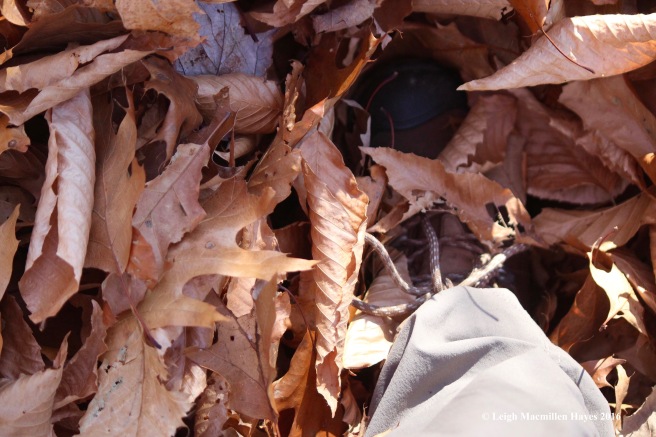 The beech and oak leaves were over a foot deep in places and obscured rocks and roots, making for a slippery slide down.

Nevertheless, we did it. Devil’s Staircase up and a devil of a climb down–and yet, two hours later we knew we’d do it again.

4 thoughts on “A Devil of a Mondate”