Our yard and barn have forever been part of a porcupine’s place in this world and so it’s not unusual to either see the critter or evidence that it has passed through.

Frequently, it nibbles on a quaking aspen near the house. Often it steps across our deck and continues on in the direction of our neighbor’s home, before circling back.

That got me thinking. Where does it go from here? And so I’ve spent the last week on the hunt. 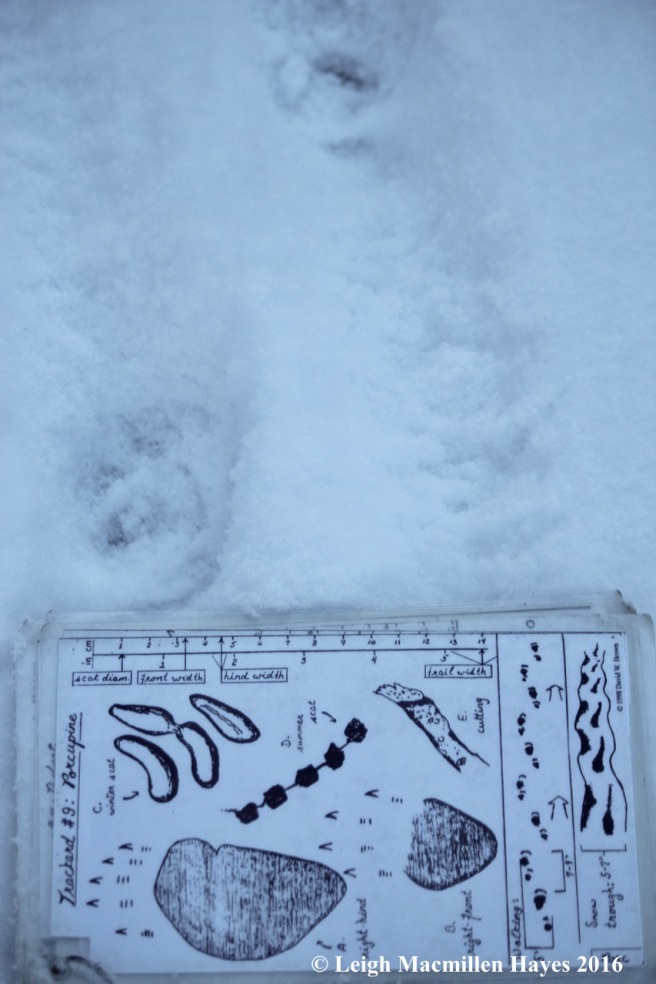 My starting point: Beside the barn where I took a look at its print and trail width or straddle. The thing to remember about tracking a mammal is that prints left behind are not always perfect due to snow conditions. 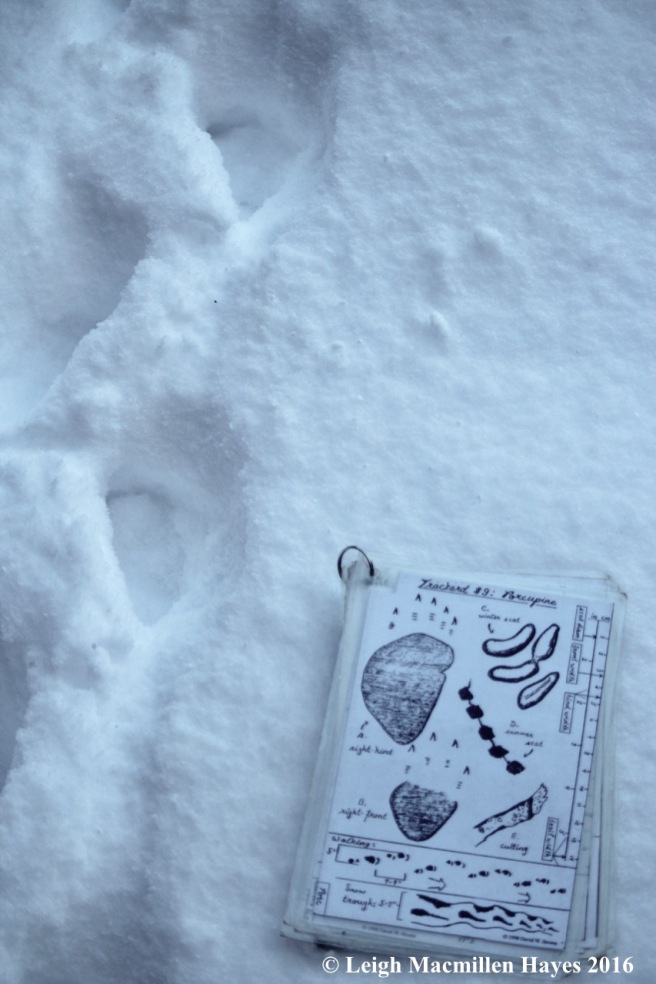 But once you recognize the long feet and pigeon-toed orientation, it becomes easy to follow a porcupine’s tracks. 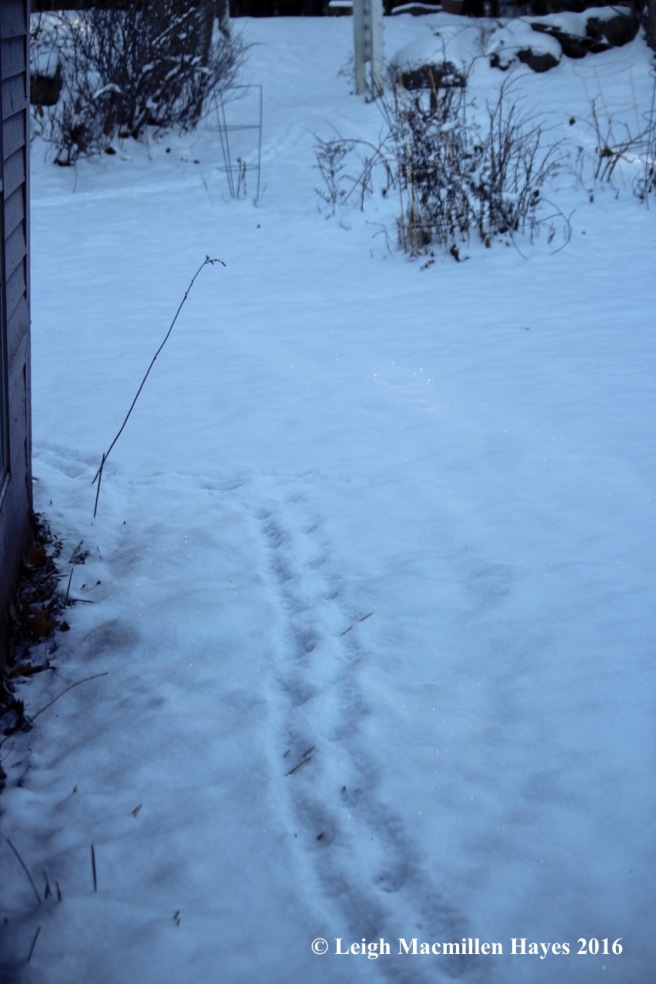 I took these a few days ago when the snow wasn’t so deep. Can you see the swaying pattern of this waddler? 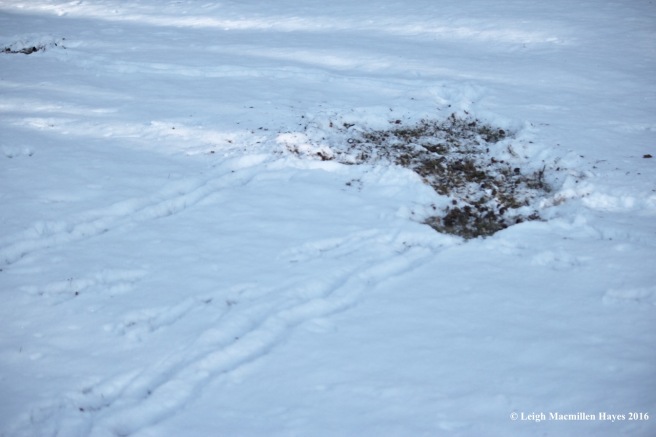 We’d had a mast year for acorn production and so it was no surprise to realize that he (or she) knew right where to go under the old oak tree. 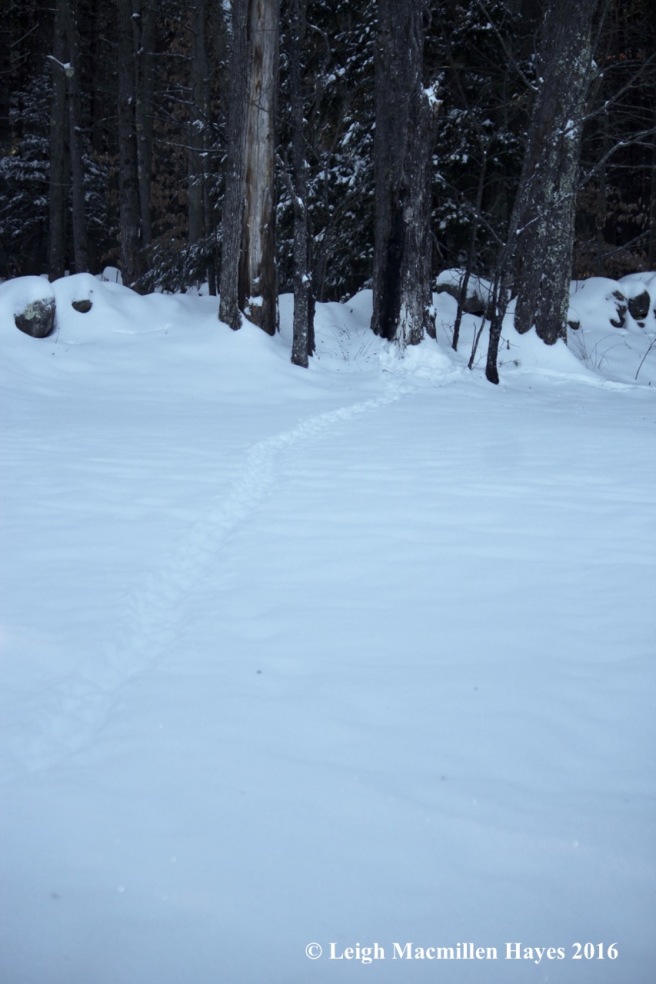 And then, two days ago I followed new tracks in deeper snow. This time, Porky ignored the acorns and headed instead toward an old ash tree.

From there, it moved under a beautiful hemlock beside a stone wall. Hemlock is a tree of choice, but as I peeked under, I noticed that it just passed through.

Over a stonewall we went, the porcupine and me, and into the woodlot, where a couple of deer had also moved. Despite the numerous sets of prints, it was still easy to distinguish Porky’s pattern and continue to follow his trail.

As was to be expected, he headed straight, relatively speaking, to another hemlock tree. So did I. And so I did what I always do when I reach a porcupine tree. I looked about the ground, searching for cut off twigs and scat. Nothing. 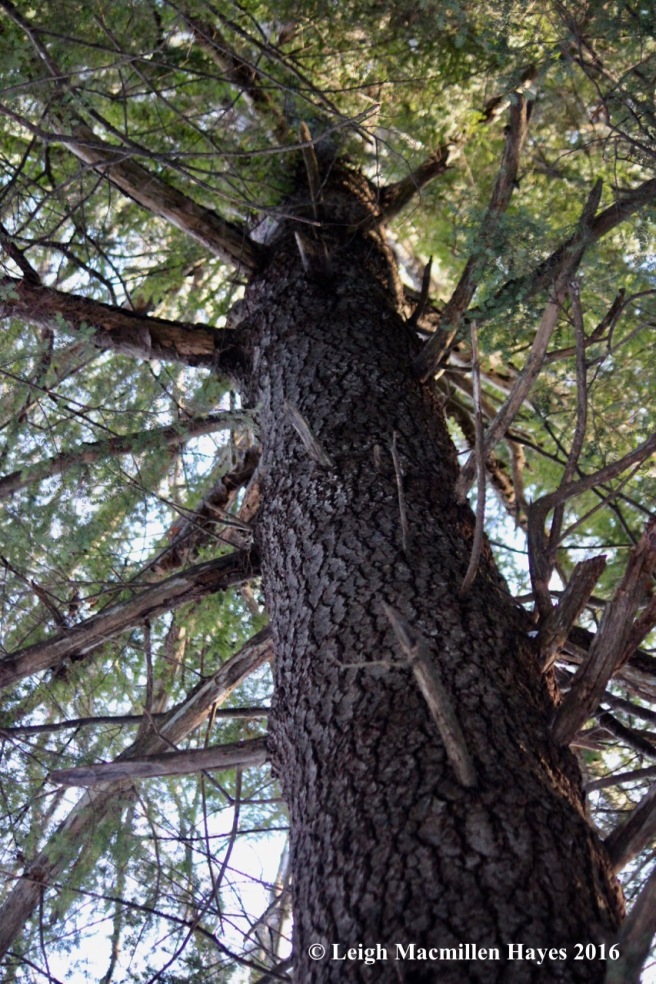 And I looked up. Not necessarily in that order, actually. Always look up first. More than once I’ve seen a porcupine in a tree, and sometimes it’s been far out on a small branch. I’ve been told that porcupines have many broken bones because they fall out of trees all the time. I don’t want to be the landing cushion.

It appeared that Porky was on a reconnaissance mission, perhaps checking out this tree for future reference.

It moved on and I followed. On our way, it lead me to a spot in the woodlot where several deer had bedded down for the night.

Next, it stopped to check out an uprooted tree.

And then it walked down the cowpath–perhaps headed back to our barn. 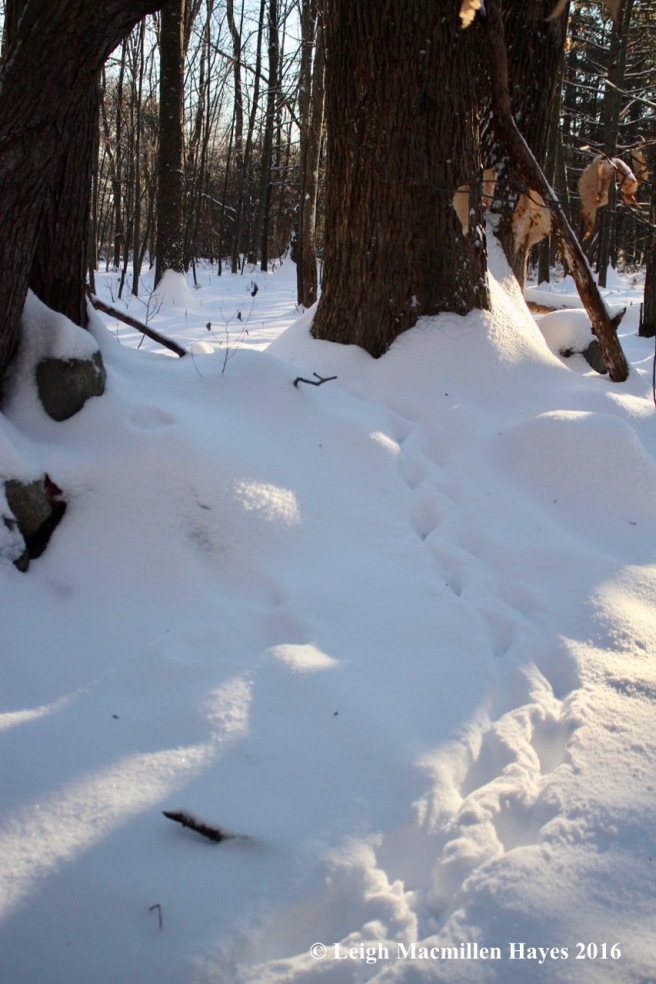 That was the wrong conclusion. Instead, we crossed over a stonewall and onto a neighbor’s land.

Eventually we found our way to an old truck that I’d previously visited when following his tracks.

The tracks led in and out again. And so our journey continued.

And just when I thought I was following Porky in one direction, I realized it was actually traveling to and fro.

We ended up back at the old oak behind the barn.

Porky enjoyed the acorns and then headed back to the truck. A gray squirrel climbed the tree. And I headed indoors. Apparently, acorns and not hemlock bark were the form of sustenance for the time being.

Since then, I’ve been checking the snow and in the past two days, no sign of Porky under the barn. In fact, in today’s blustery weather and snow squalls, his two-day old prints leading to the ash tree were filled with snow, but the pattern still spoke his name.

I followed the cowpath, where deer tracks were evident beside and along Porky’s path. 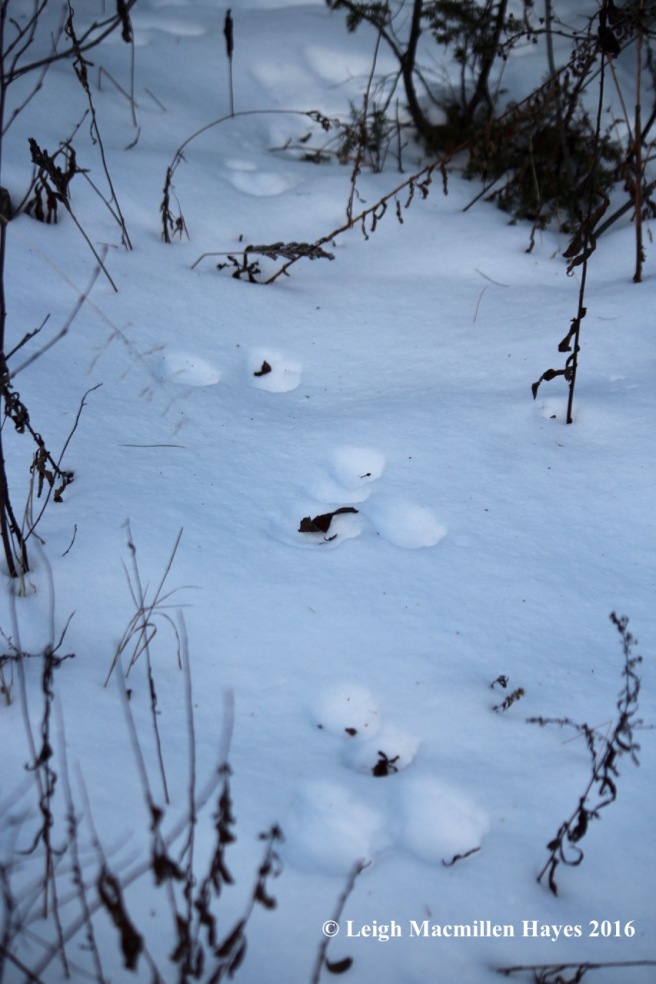 I didn’t find porcupine prints, but did note where the snowshoe hare had their own feeding adventures. 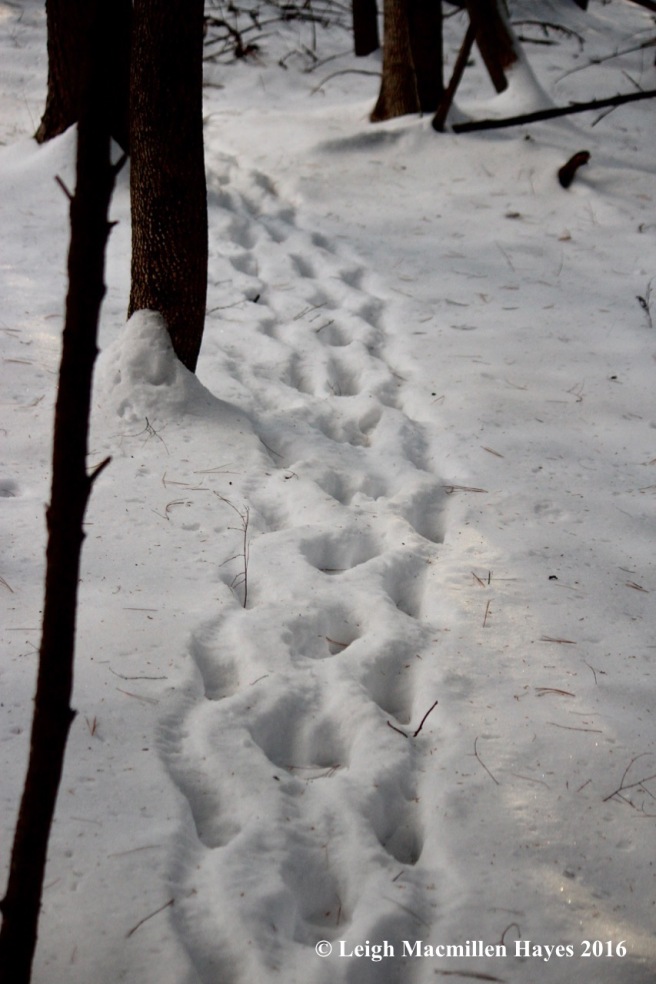 And then, I again came upon that wavy pattern with plenty of foot drag–a sight to behold. In this instance, I knew I’d found the crème de la crème of mammal species–with a super wide hip span and three legs. Or better yet, the out and back trail of Porky. The same Porky? Or a relative? 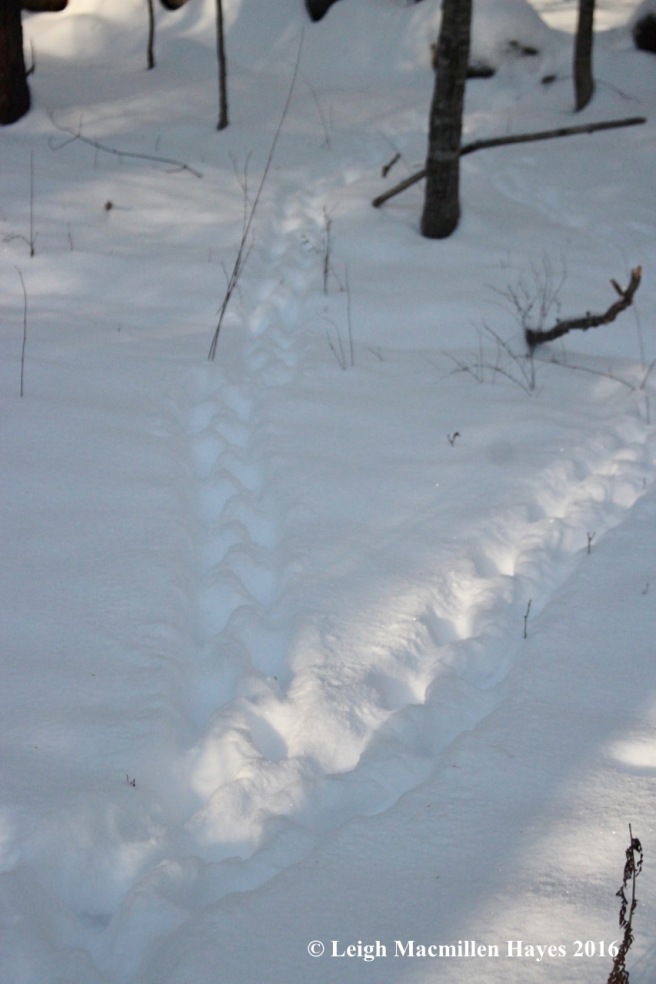 Its path split and came together again. And I thought of the deer and snowshoe hare and how they create runways that get packed down making winter travel easier. And we follow suit with our own snowshoe or ski paths. 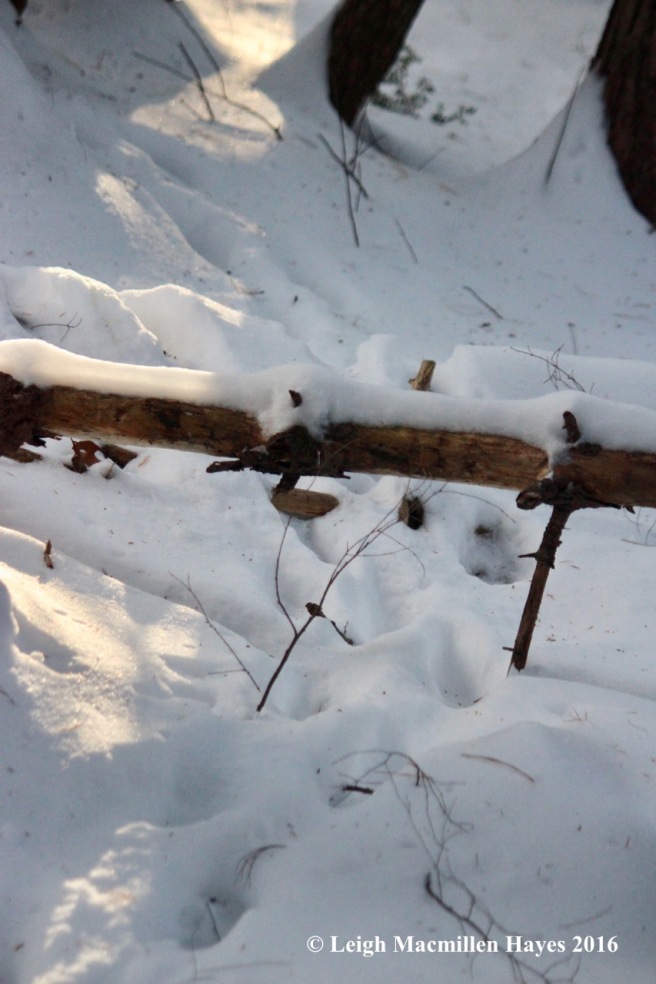 While Porky passed under a fallen tree, I stepped over it.

And again, we landed at a hemlock tree. Another reconnaissance mission? Do porcupines check out hemlocks prior to laying claim and spending the winter creating Lorax trees? What makes a tree desirable?  From past adventures, I do know that they travel what seems like miles to get to one tree and then return to their dens on a daily basis.

While Porky continued through the trees and doubled back, I headed off further into the woods for a while. I knew where previous dens existed and wondered if they were active. No such luck.

But . . . much more deer activity. Last winter’s lack of snow meant a good life for our local herd.

Continuing along, my eyes cued in to hemlock twigs on the ground. At last–Porky evidence.

Nice try, but instead a squirrel midden told me who had spent time in this tree. Squirrels, too, nip hemlock twigs to get the cones and thus their seeds. Their twig nips are much smaller than those of a porcupine. 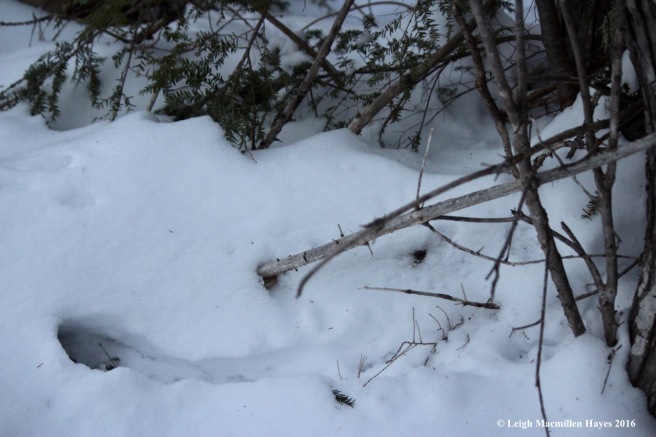 Beside the squirrel tree, a pathway to its tunnel. Every year seems to be a good squirrel year.

On my way home, again I found Porky’s tracks heading in the opposite direction than I’d followed, its to and fro trail splitting and joining again.

And more deer evidence–three beds in a row. The smooth of their backs faced each other as if they looked outward, keeping an eye out for predators.

The ground below the warm bodies had frozen and within the bed I could see a silhouette. 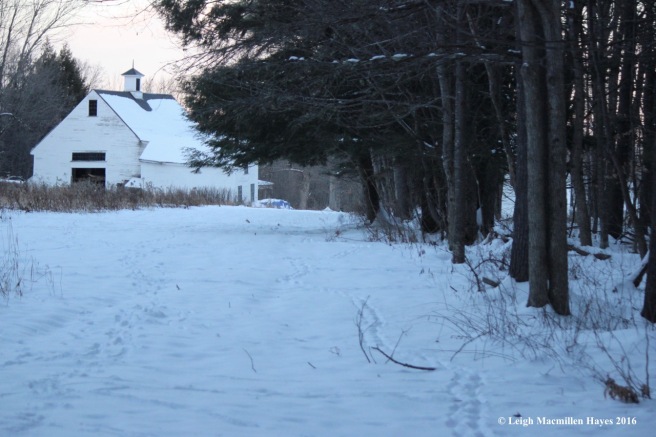 But, I was traveling with a porcupine and following its trail–to another barn. Same Porky? Kin?

The wind was howling and temperature dropping as I turned and headed back to my own barn and home. I realized, however, that I still have much to learn about porcupines and can’t wait to continue our journey together.

4 thoughts on “Lessons from a Porcupine”