It was 8˚ this morning as I headed out the back door with micro-spikes attached to my hiking boots, sure that I’d stay atop the ice-crusted snow. Not to be. Immediately, I began to sink and realized snowshoes would serve me better.

And so a few minutes later I reemerged, ready for a walk, albeit loud since with each step I took the sound of crunchy snow echoed in the crisp air.

But being a bright cold morning, the view to Mount Washington was equally enhanced. 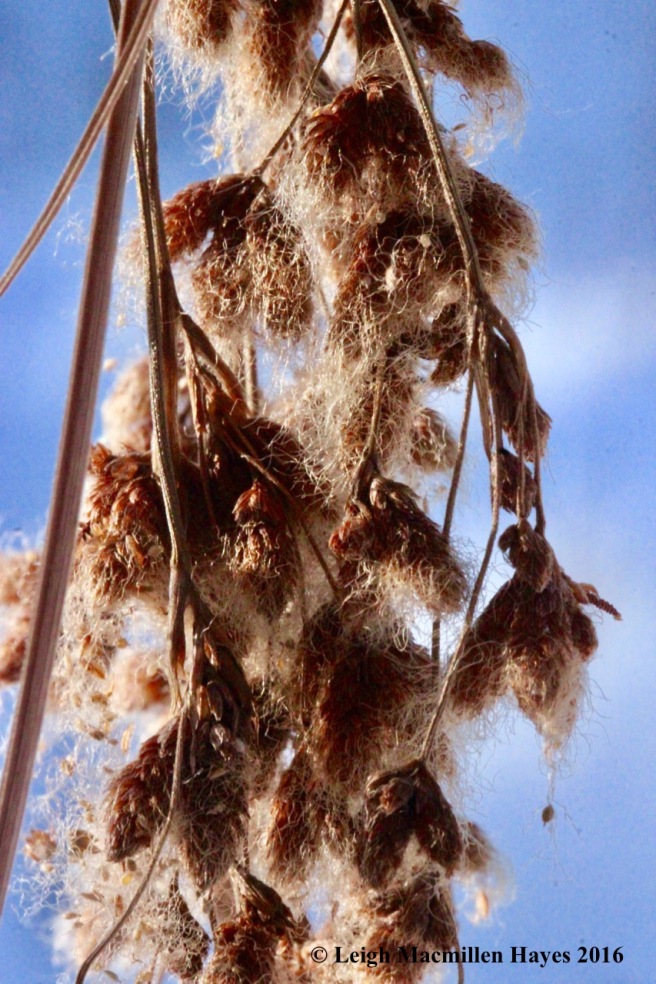 I quickly moved from our property into the woodland owned by others and started down a trail I’d forged many years ago. Along the way, I was warmed by the sight of the downy seeds of bulrushes swaying in a gentle breeze.

Because of recent logging activity, Red Maple saplings stood out in the landscape, their buds embraced by waxy and hairy scales that provided sure protection from winter moments. 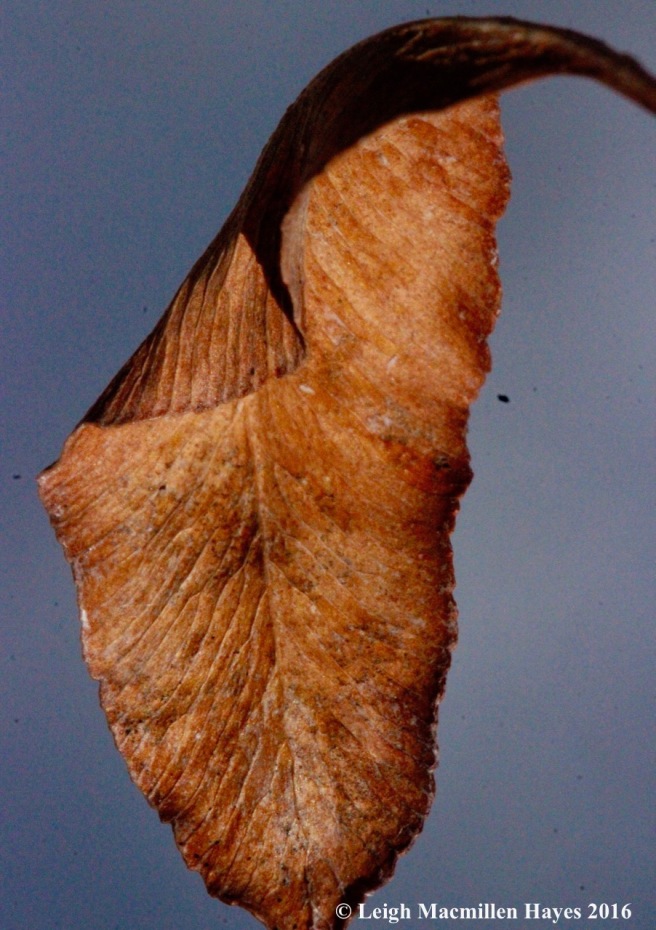 Where only a few days ago, this trail had been a wee bit difficult as I dodged sure wet spots, today all was frozen. Despite the snow and rain of recent days, Royal Ferns shone with their bronze winter display.

The left behind flower bracts of witch hazel reminded me of their two-fold job, from flower base to next year’s seed pod–and a third job for today when they provided a hint of golden yellow to the landscape. 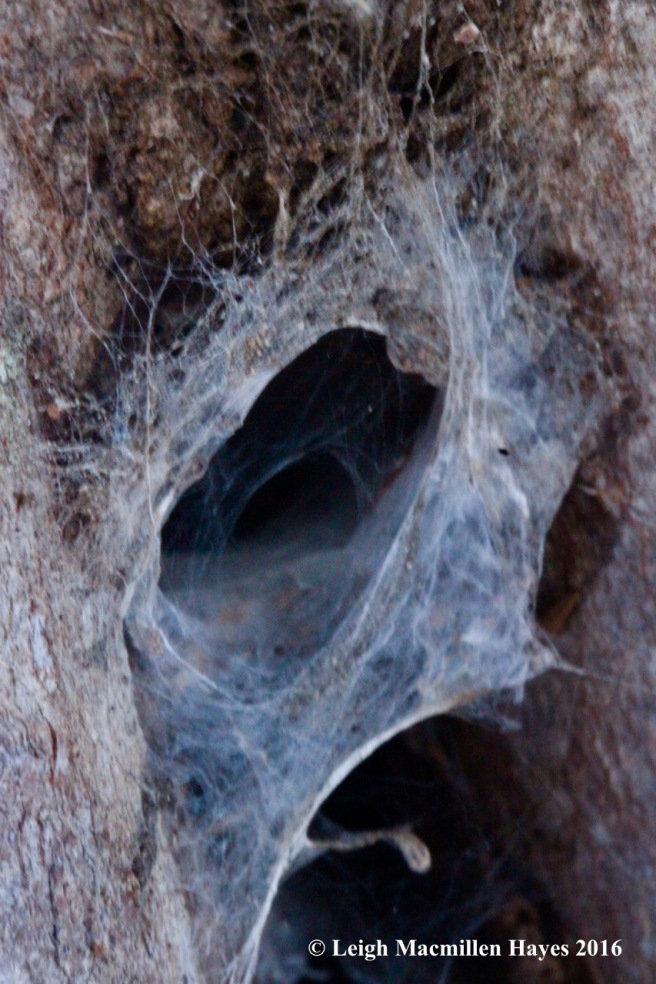 In several trees, I discovered old funnel spider webs and trusted that the creators were enjoying a dormant season of their own somewhere below my feet.

After reaching an intersection in paths, I struck out to create a trail not yet carved. It was here that the White Lettuce or White Rattlesnake-root grew most abundantly, its seeds reminiscent of bird feathers.

Likewise, some bracts had already cast all offspring to the wind and all that remained were small jelly-fish statues. 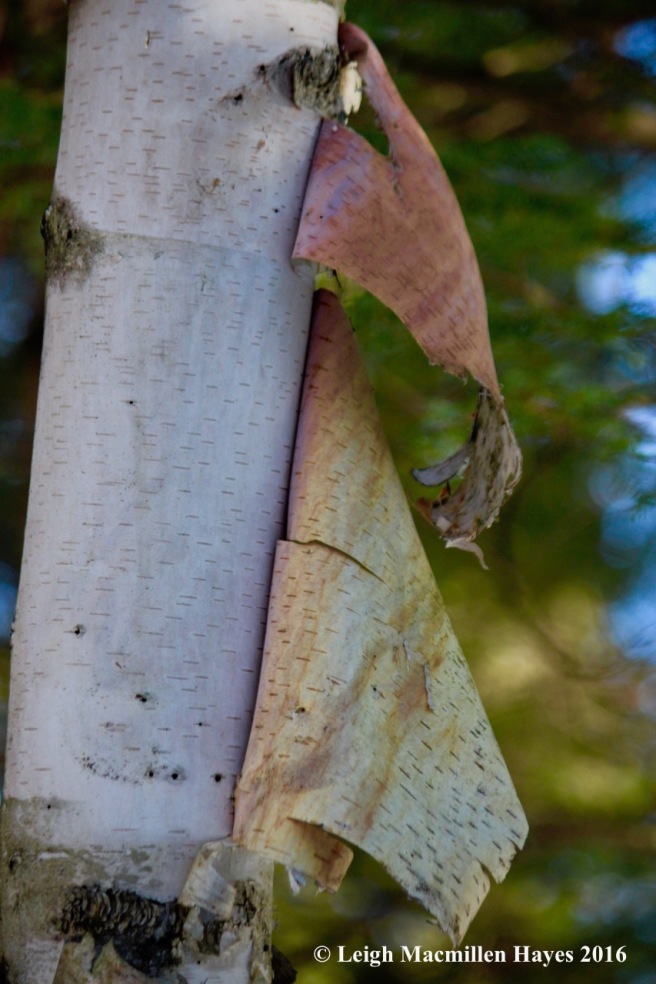 After doubling back, I passed by my first path and then rather than follow a common route home, decided a bushwhack was more to my pleasing. It wasn’t always an easy trudge and I had to use the sun to help me figure out my direction, but offered its own points of wonder, including the pink and orangey inner bark of paper birch displaying matching lenticels (the little lines that are tree pores for gas exchange).

Spruce cone scales, this one with a seed still attached, decorated the snow-covered forest floor. 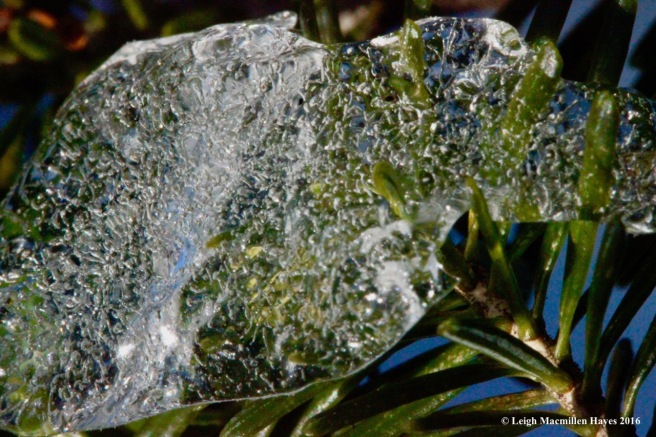 As often happens, I got caught in movement, nothing that couldn’t be fixed by quickly stepping out of the snowshoe.

In the midst of my journey, I discovered boundaries in places where I didn’t recall encountering them before. But they’ve been there–for a longtime. Fortunately for me and those who follow in my footsteps, we’re allowed to cross those boundaries at will. If you do follow, however, you may want to forge some of your own pathways. At times, mine required acrobatic movements that weren’t always fluid.

You may have noticed that my guy and I haven’t had a Mondate in about a month. We trust we will again soon, but we’ve had a lot of stuff to do around the old homestead. To that end, we’re both looking forward to future Mondates that know no bounds. Where will 2017 take us?