When we awoke I checked the thermometer. Negative 6˚. By the time lunch was packed, hot cocoa poured into thermos and bodies decked in layers, I checked again. Negative 8˚. But a sunny negative 8˚. With only a slight breeze. 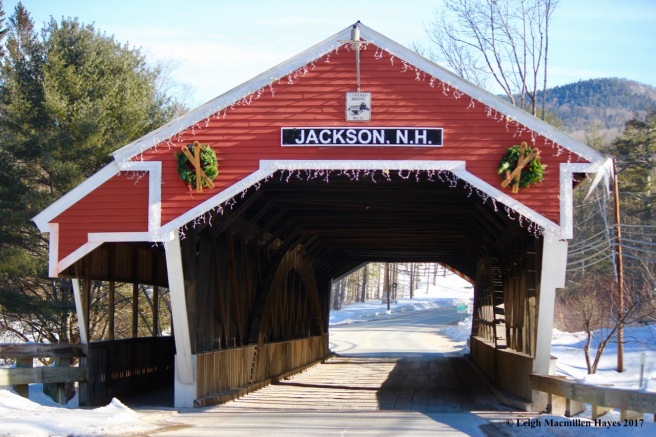 And so we drove to Jackson, N.H. This town holds fond memories for us, including our wedding night spent up the street before we departed for Ireland the next day. That was 26 years ago.

It had been about eleven years since we’d last hiked the North and South Doublehead Loop that we chose for today. That was a December hike, with not as much snow. Our first inclination this morning was a snowshoe hike. Seconds before we were about to pull out of the driveway, my guy mentioned micro-spikes. And so he ran back into the house and grabbed both pairs.

Brilliant move as the trail was extremely well packed. In fact, at the start, though I donned mine, he stowed his until necessary. Not wearing snowshoes meant not going off trail, but I was with my guy and knew that destination was of prime importance. I didn’t mind as the snowshoes would have been more cumbersome. 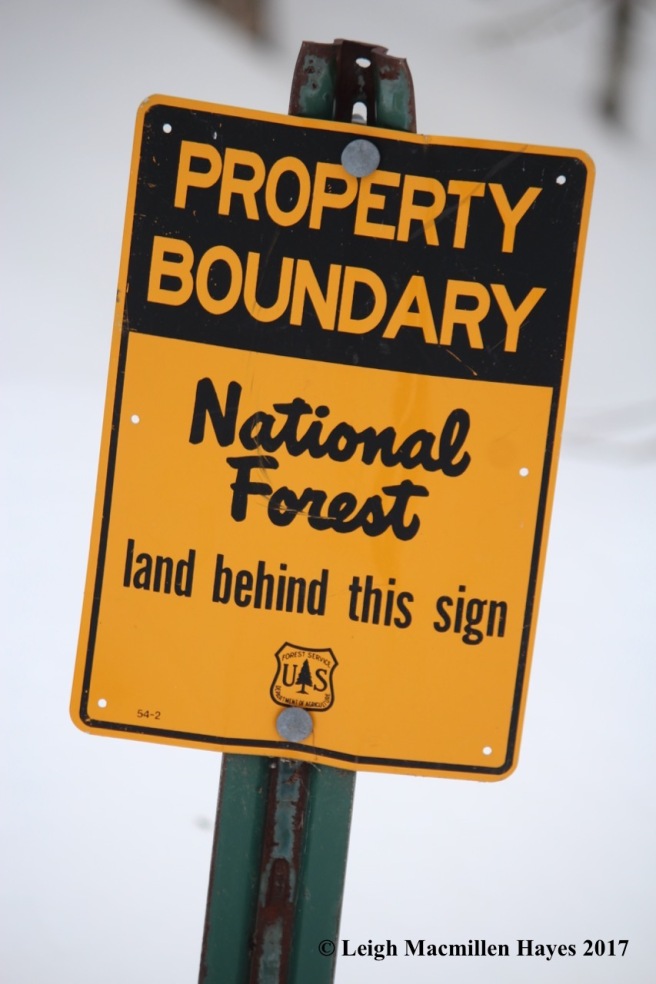 Though we were on an upward climb, the traveling was easy, affording the opportunity to look around and take in the sights, including the sharing of nutrients by an ash and a maple. Grafted though they were, they grew on their own; each dependent upon yet independent of the other–a mirrored reflection of the relationship my guy and I are honored to share.

We were still a wee bit chilly (well, maybe more than a wee bit), but knew we weren’t the only ones dealing with the low temps. Squirrel tracks led in and out of this upturned tree and the hoar frost indicated life snuggled therein.

Every where, snowshoe hare tracks crisscrossed our path. I hoped we’d see at least one, if not ten, but that wasn’t to be. We were rather loud, each footstep seemingly an echo in the crisp air. 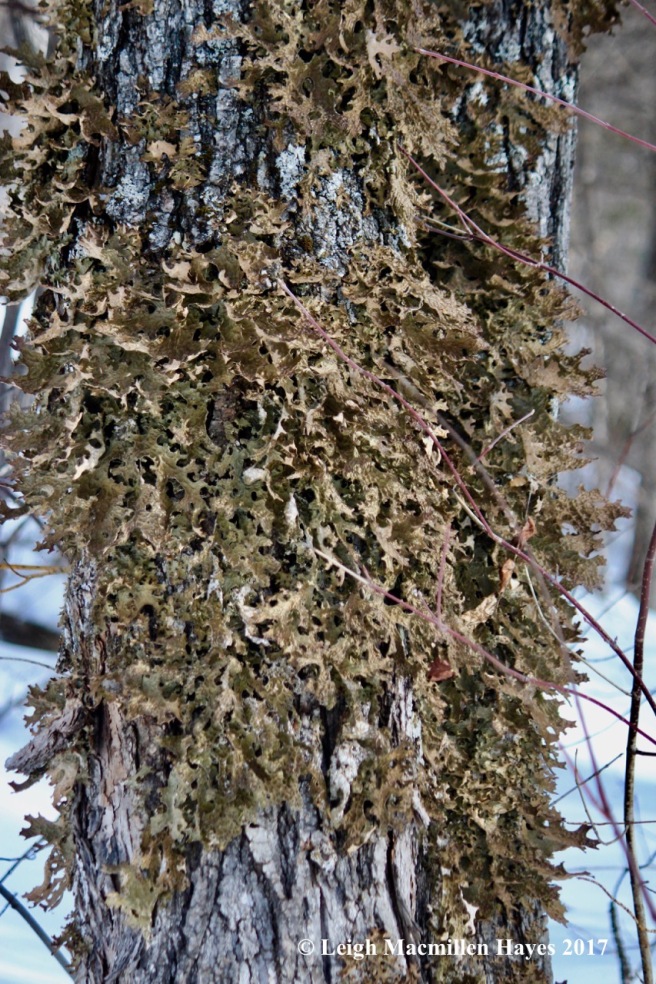 We took several water breaks, including one by this tree covered in lungwort. I was excited to see the lungwort, but at the same time realized that my lens cap was missing. How many can one person loose? And to think that this one was tethered to my camera.

My guy, being MY guy, took off down the trail, assuming it would be visible and he’d find it in no time. 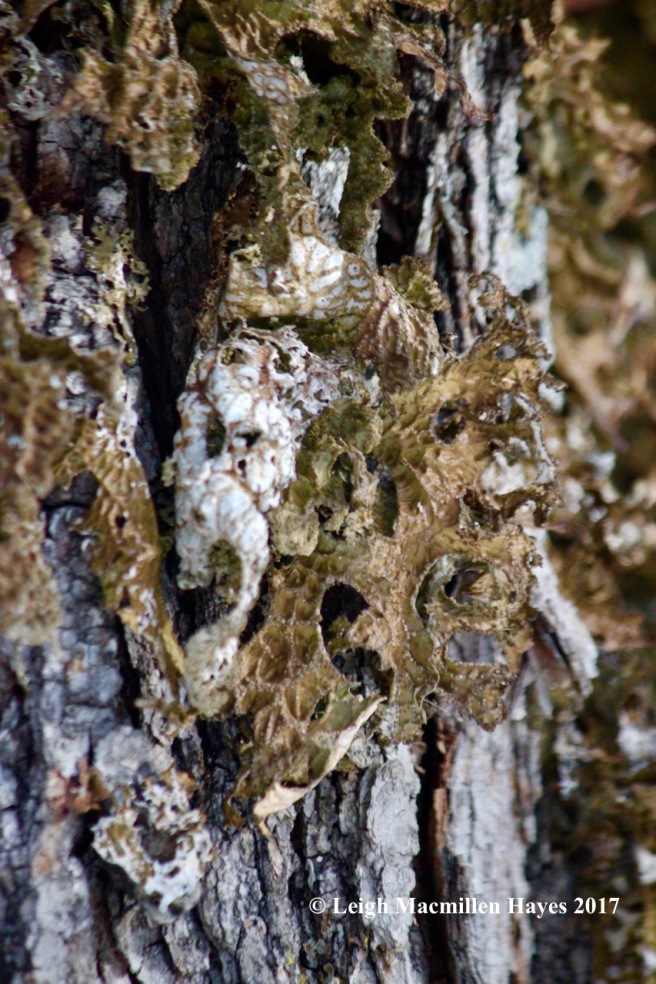 For me, it was a time to spend a few minutes noticing. The ridged and pitted surface of lungwort is said to resemble lung tissue–thus the common name. During the Renaissance era, when the physical form of a plant was thought to determine its use, tree lungwort’s similarity to the structure of a lung led to the belief that it healed respiratory problems.

One of the things about lungwort is that it does absorb and fix nitrogen from the atmosphere, so it’s always a good find.

As I waited, I listened. Besides the voices in my head, I heard a woodpecker tapping and beech leaves shivering.

My guy returned, sweaty from climbing down and up again, as well as empty handed. But we made a plan to continue the lens-cover rescue mission on our way down. 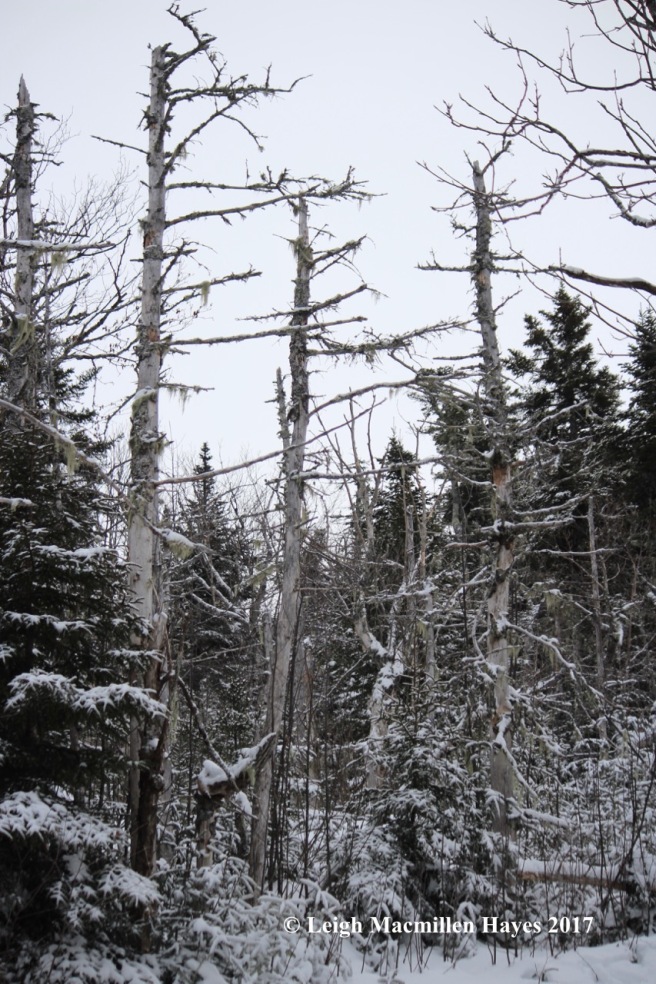 And so up and up and up we climbed. The ski trail, on which we ascended, is only 1.2 miles long, but it is steep. Eventually, we both realized the community was changing and knew we were approaching the summit.

It was here that Old Man’s Beard Lichen decorated the trees and made me think of hermits spending time on these mountain tops.

Suddenly the cabin at North Doublehead came into view. It could have been the perfect hermitage, but rather it has hosted many a crowd over the years. The cabin was built as a Civilian Conservation Corps (CCC) project in the early 1930s, as was the ski trail by which we climbed upward. It’s available for rental through the WMNF and sleeps eight.

My guy had taken off his hat to let some heat escape. And then he peered inside. A Peeking Tom he ain’t, but curious he is.

Not all of the windows offered a view within, but their artwork spoke of the lack of heat on a cold winter’s day. 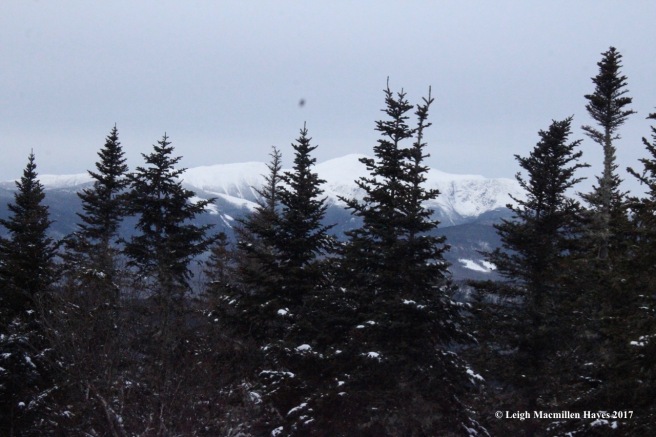 I stood upon a rock that I thought would become lunch rock and took in the view of Mount Washington.

We could see the towers atop, but the telephoto lens enhanced the view and we knew that despite how we felt at any time of this day, the rime ice that coated the buildings was a mere indication of what the crew dealt with on New England’s highest peak.

My guy was feeling the chill after sweating so much and so we followed the trail, a steep decent to the col between the two summits.

Finally, at the next intersection, his body temp had regulated and we found lunch ground, no rocks in sight. Frozen PB&J and hot cocoa fortified us yet again.

The climb to South Doublehead was by far the easiest, and the view most dramatic. We didn’t stay too long as it was there that we felt the breeze. 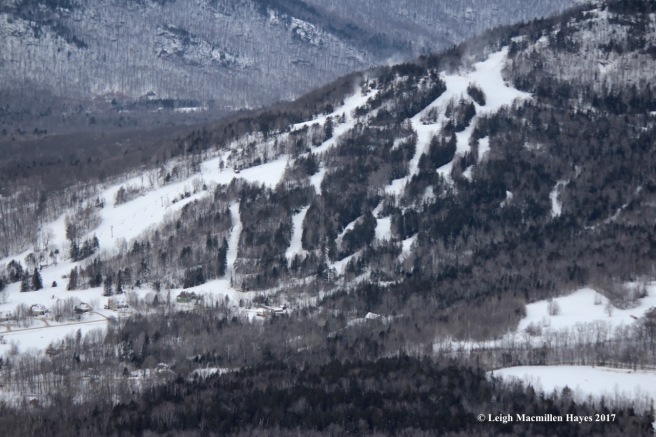 But the view–oh my! It took our breath away. Or maybe that was the wind chill? At Black Mountain, we could see they were taking advantage and had fired up the snow machines.

We returned to our lunch spot where I wanted to grab a pic of the hobblebush buds. As I shifted my backpack something fell to the ground–my camera lens cover. We gave thanks that we wouldn’t have to retrace our steps when the Old Path intersected with the Ski Trail down below.

I knew my friend Jinnie Mae would tease me about not being able to resist a hobblebush, but really, check out those naked leaf buds that surround the also naked flower bud. The leaf buds on most of our trees and shrubs survive the winter with a waxy coating. Both hobblebush and witch hazel, however, don’t have such a luxury, though I have to wonder if  their hairy coating adds an insulating layer. 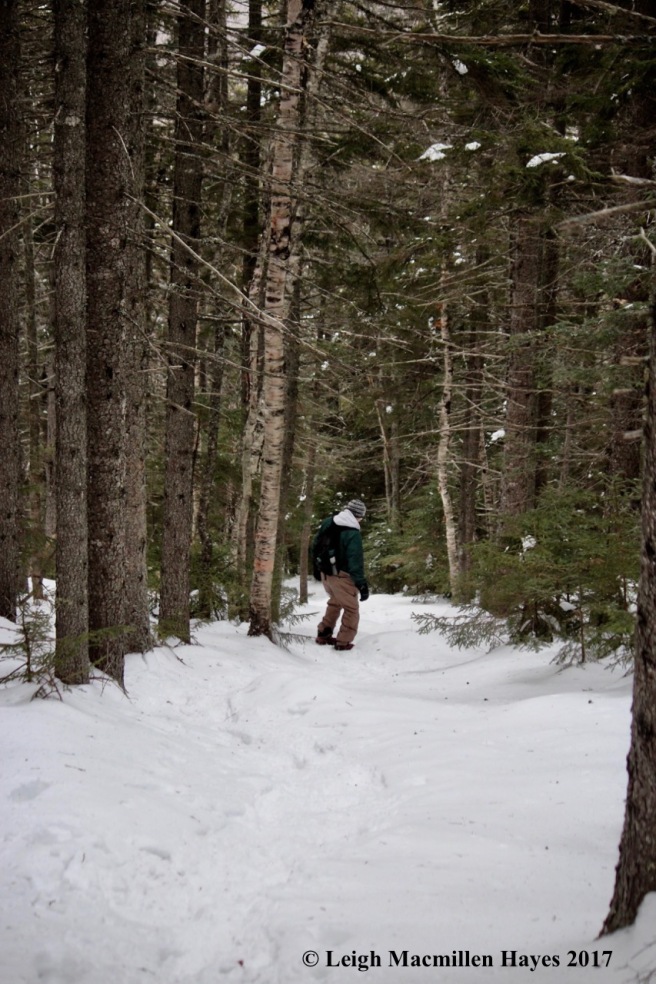 At last we climbed down the Old Path, a steep and straight descent for the most part that found us using the crab-style of downhill hiking–a sideways approach to keep from slipping. Despite that, it’s a beautiful trail, cathedral-like among the steeples of the spruces, firs and birches.

We finished our hike and then returned to Jackson, where glistening objects on the porch of The Wentworth Inn forced us to jump out of the truck. What to our wondering eyes should we spy? A dragonfly, 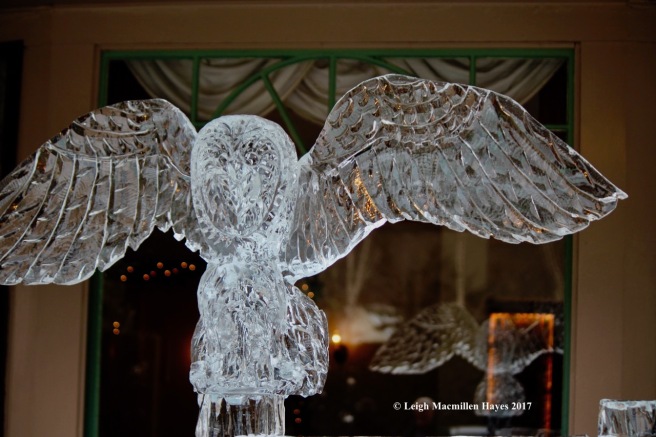 I’d thought for sure we’d see some form of wildlife all day, but these ice sculptures were as close as we got. The latter cracks me up as it seems such an oxymoron to see a jellyfish carved out of ice. Oh, there was also a cactus.

The perfect ending to our shiver of a Mondate.

4 thoughts on “A Shiver of a Mondate”