A sheet of ice greeted me in the parking lot at the GLLT’s Flat Hill trailhead this morning, not to be unexpected given the recent rain and fluctuation in temperature. From -8˚on Monday to +50˚ midweek and this morning back to 0˚, we’ve been riding a thermometer rollercoaster. Consequently, I chose micro-spikes over snowshoes and made sure I packed my hiking pole and hand warmers.

Even the pumpkin had an ice covering? What? I know not where this came from or what the “5” means, but it sits upon the basswood stump beside the lot and greets all who pass by.

Despite the rain and warmer temps for a couple of days, the snowpack is still over a foot deep and quite dense.

In fact, it’s so dense, that a previous snowshoer who probably had hiked this way last weekend, barely broke through, and I was able to stay on top, except for an occasional post hole. Well, maybe more than occasional given that I frequently went off the main trail to check things out.

Upon the trail, the leaves of marcescent trees gathered in the snowshoe indentations.

Even a few that aren’t marcescent made their presence known, like this sugar maple. A friend ask me recently about the pronunciation of that word that I love to say because of how it makes my mouth work: ˌmärˈses(ə)nt. He wanted the first “c” to be hard, but indeed it isn’t. 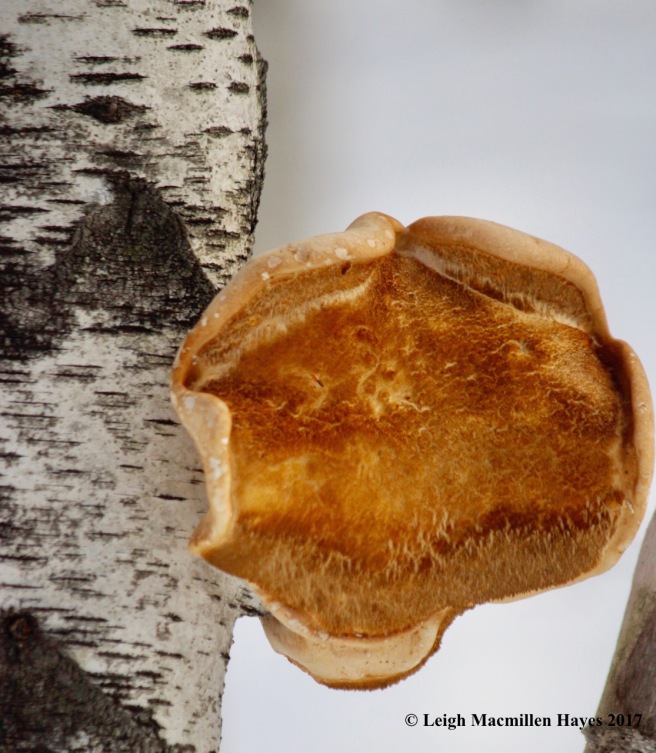 A birch polypore growing at an abnormal angle made me wonder what had happened. I’m still wondering.

And then I spotted a different color on the snow beneath a beech tree. This was when I realized that rather than my hiking boots I should have worn snow boots. A few post holes and the snow slipped in under the boot tongues.

But . . . it was worth it. Up high–the elongated hole created by a pileated woodpecker.

As I continued hiking, I noticed tracks that crossed the trail in several places. They weren’t quite discernible, but I had a feeling they’d been made by a fisher. And then, further along, I noticed these, which though not perfect, were easier to determine. Their pigeon-toed, sashaying behavior indicated porcupine, a resident of this place (and prey of the fisher). 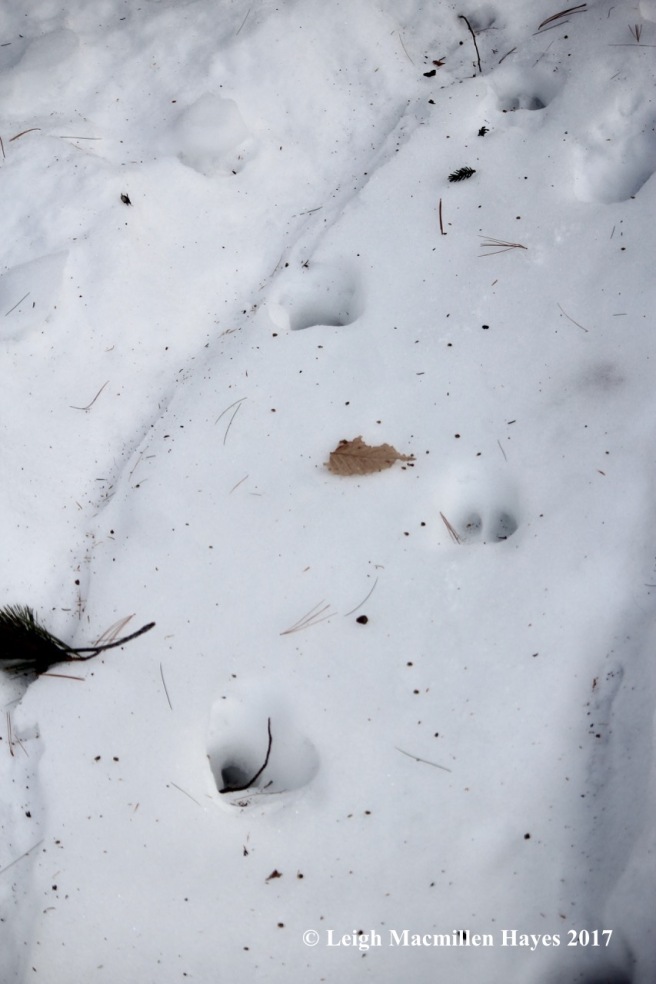 And at the summit, deer tracks.

I love the name Flat Hill–an oxymoron it seems, though once you climb up, you realize that the top is almost flat. And from here the Baldfaces and Mount Washington enhance the view. I looked around for the typical porcupine works and perhaps the critter itself who sometimes can be seen in the treetops, but was disappointed to see neither. Despite the hand warmers, my fingers were frozen–probably because I kept taking my mittens off to take photos. I’d intended to eat lunch at the top, but it wasn’t to be.

Common polypody ferns that grow on the summit rock curled inward as if to confirm my chill.

And as I turned to descend, the blueness of pine sap seeping from a woodpecker hole also spoke to the day–the lower the temp, the bluer it appears.

It was that sap that pulled my attention to another sight I’d missed on the way up. White pine branches were scattered below a couple of trees and tracks were almost visible all around.

I looked up, but my friend was nowhere to be seen. And so I looked down to admire his work–angled cuts and nibbled needles. I can honestly say I’ve never paid attention to the needle works before.

Amongst his offerings tree bark also decorated the forest floor for he discarded the bark to get at the cambium layer beneath. The one thing I didn’t find was scat. And believe me, I searched.

Though most of his work was on older trees, younger ones had also been visited. I was just to the left of the trail summit and in the past I’ve searched the ledge below for a den. Today, I didn’t do so, but his path led in that direction. Perhaps he saved his scat to serve as insulation back at the homestead. I don’t know, can porcupines choose when and where to leave such offerings? Usually it seems that they don’t have such control.

I left the porcupine findings behind and headed back down to Perky’s Path, a favorite place because of the wetland it passes through. 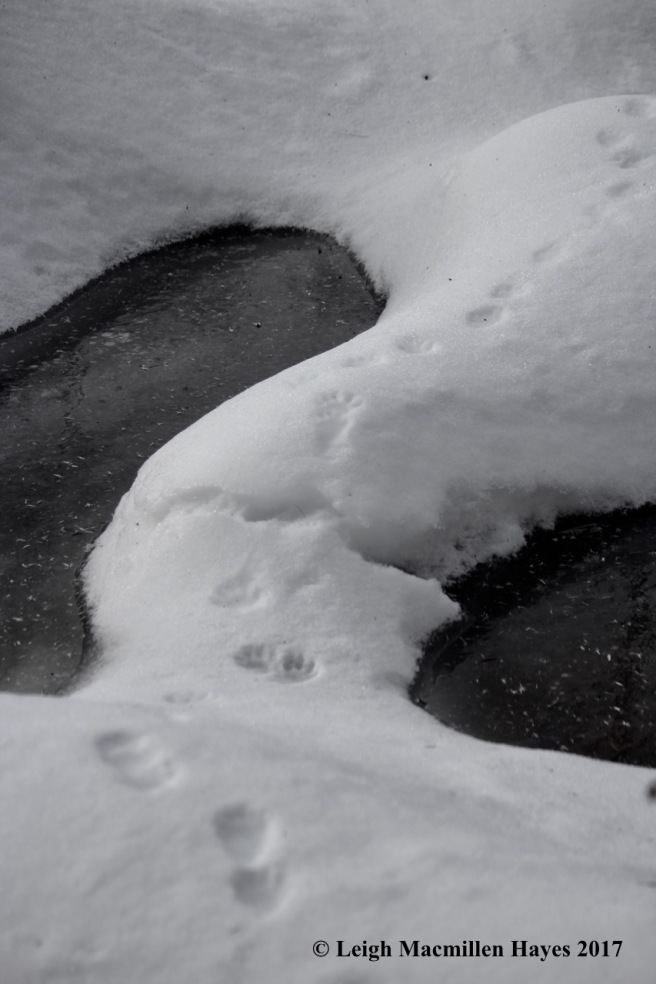 No humans had been this way in a while, but a critter recently paid a visit.

My brain went into overdrive. Could it be? Well, it had been warm for two days, so it could . . . be a raccoon. When I’m alone, I’m 100% correct, but today I kept questioning myself. The prints were the right size and the pattern and habitat worked. But if you think otherwise, I’m willing to listen. 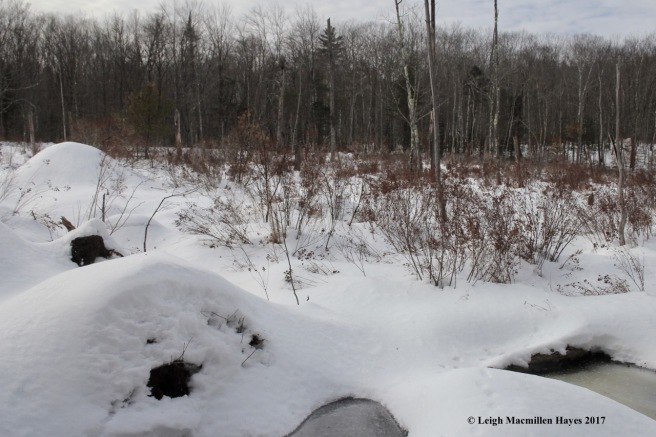 What I do know is that the beaver lodge, the uppermost hump on the left, remained abandoned. 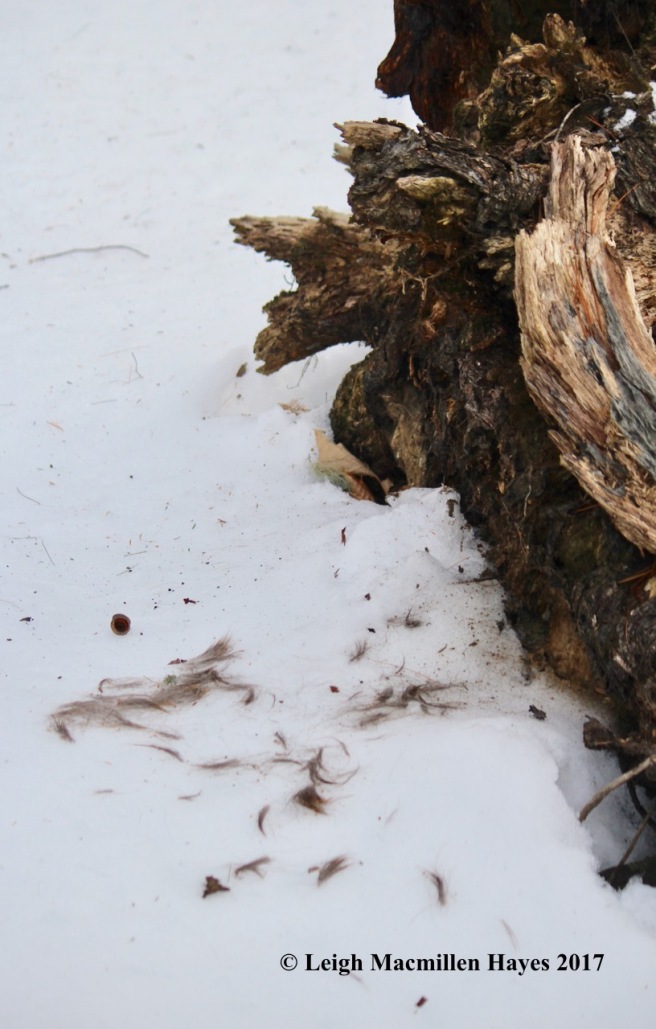 I decided to follow the wetland for a bit, until something caught my eye near the root system of an downed tree closer to the trail.

Hair. Small tufts of it. 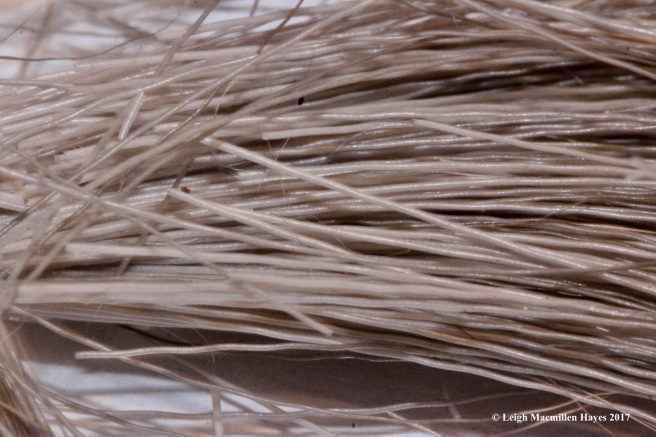 Beside hair-filled scat. There were no prints in the snow, such as it was. I wasn’t even digging post holes at that point, with the temperature lower closer to the wetland. Here’s my story of what I saw. As a red fox searched for prey, including in the hole beside the downed tree, the mites that have infected its skin made it itch. The tree roots provided the perfect back scratcher (there were a few hairs hanging from it) and so the fox took advantage. Its scat–incidental or intended, I’m not sure. Typically, it’s intended, leaving a message to others about boundaries, age, sex and the like. Does it also announce the presence of mites? Red foxes and not gray, are affected by the sarcoptic mange mites.

After such a finding, I needed to move on. By the bridges that cross the wetland, the view was as beautiful as ever.

Royal ferns, almost a memory, leaned over the water’s edge. 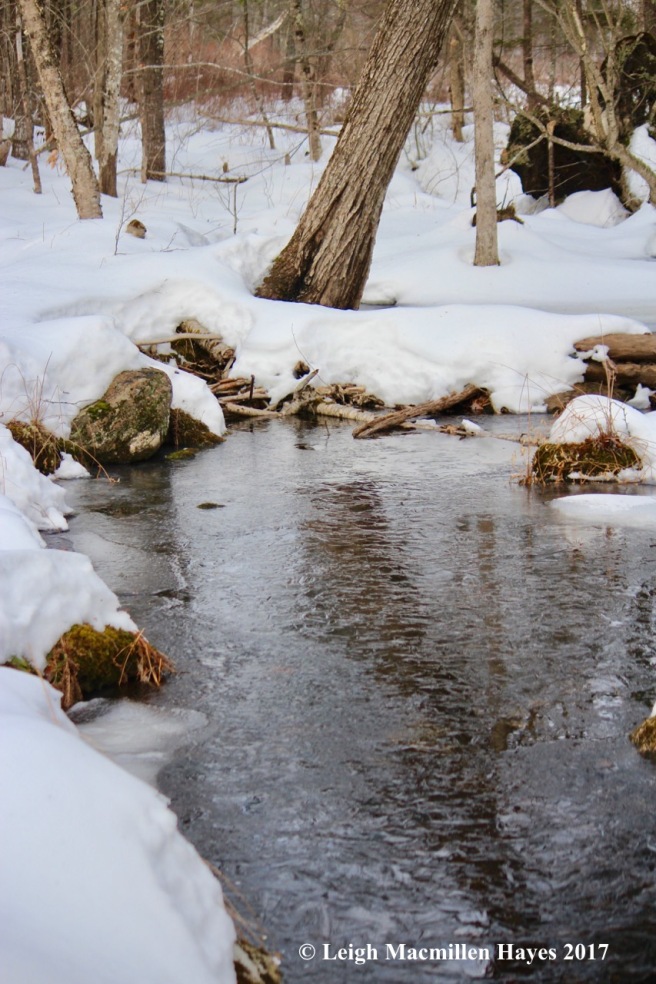 Trees offered reflections in the flow of the water.

And ice gathered in solid, yet fluid motion. 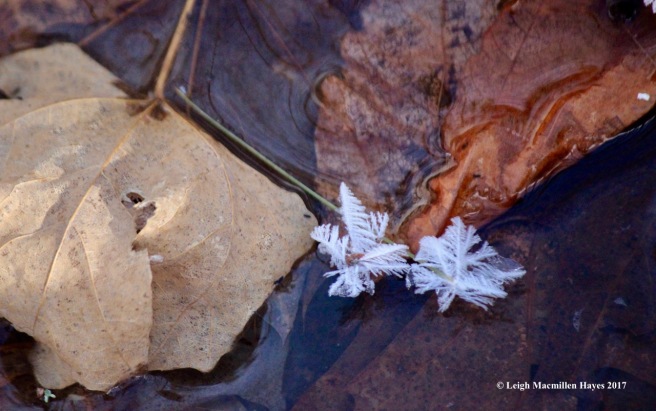 I, too, was chilled, but happy to have time to reflect on the lives that call Flat Hill and Perky’s Path home. And then I was happy to head home, the heat in my truck on high for most of the trip.