I wish there’d been a good place to stop along the Kanc (Kancamagus Highway) this morning to watch the snow-beasts wade like water buffalo in the Swift River. OK, so they weren’t really beasts, but large boulders topped with layers of snow and ice and looking rather beast-like in a friendly sort of way. Instead we continued on, tucking those images into our minds’ eyes.

About thirteen miles from the start of the Kanc, we reached our destination and knew we were there when we located the “You Are Here” sign. Our goal, Hedgehog Mountain. 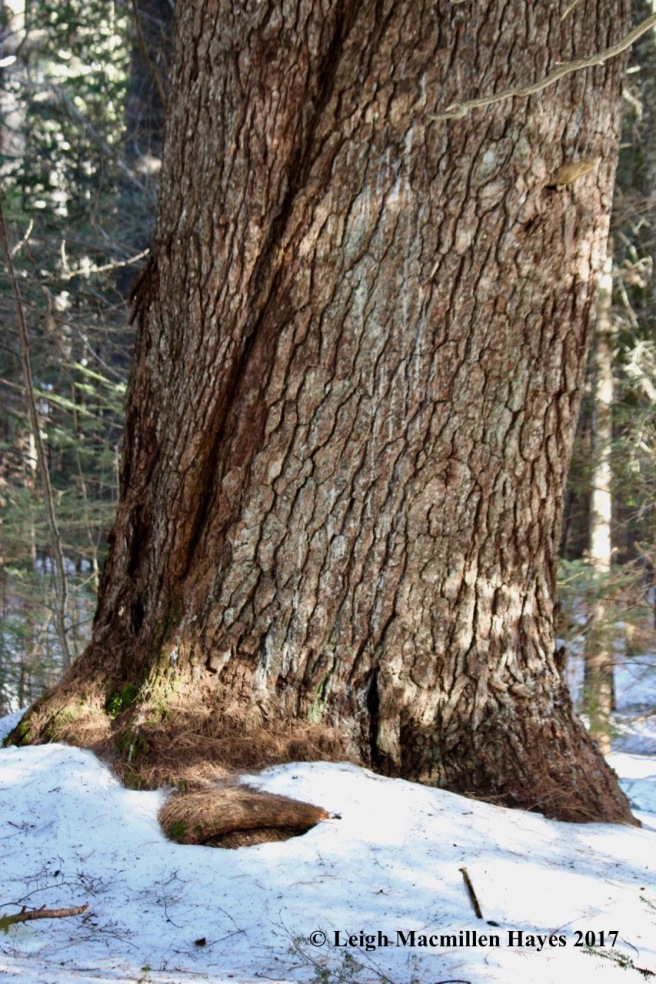 The trail begins along the flat terrain of the old Swift River Railroad and among the spruces, firs and birches, a white pine shouted its presence. It appeared to have been weeviled  or split for some other reason, maybe railroad related, early in life. The railroad operated from 1906 to 1916 to service the Conway Lumber Company, shutting down one hundred years ago, so potentially this tree is at least that old. 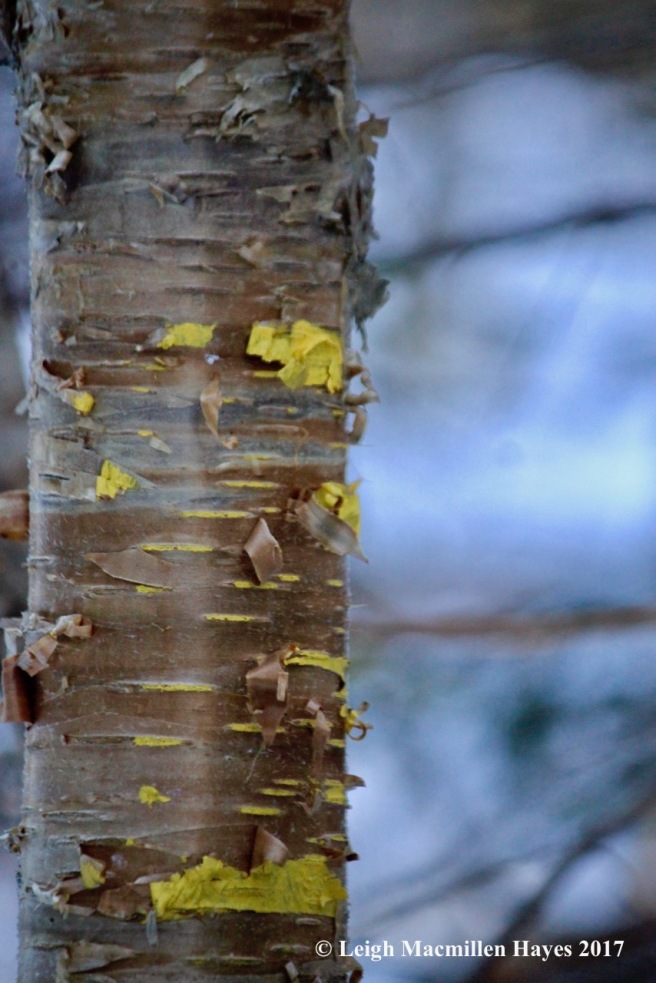 Nearby, a much younger birch, yellower than normal, indicated we were on the right path. Yellow birch live the longest of the birches, to an average of 150 years, so potentially this one has a long life in front of it. We hope it will continue to lead the way for at least that many years–though it may need a fresh blaze paint job.

At the split in the trail, we decided to follow the counter-clockwise route, figuring we’d conquer the steeper route on the way up. It’s called the UNH Loop Trail because the property had been donated to the university in the 1960s and hosted a forestry camp for a time. The name stuck. The camp didn’t. Nor the ownership. 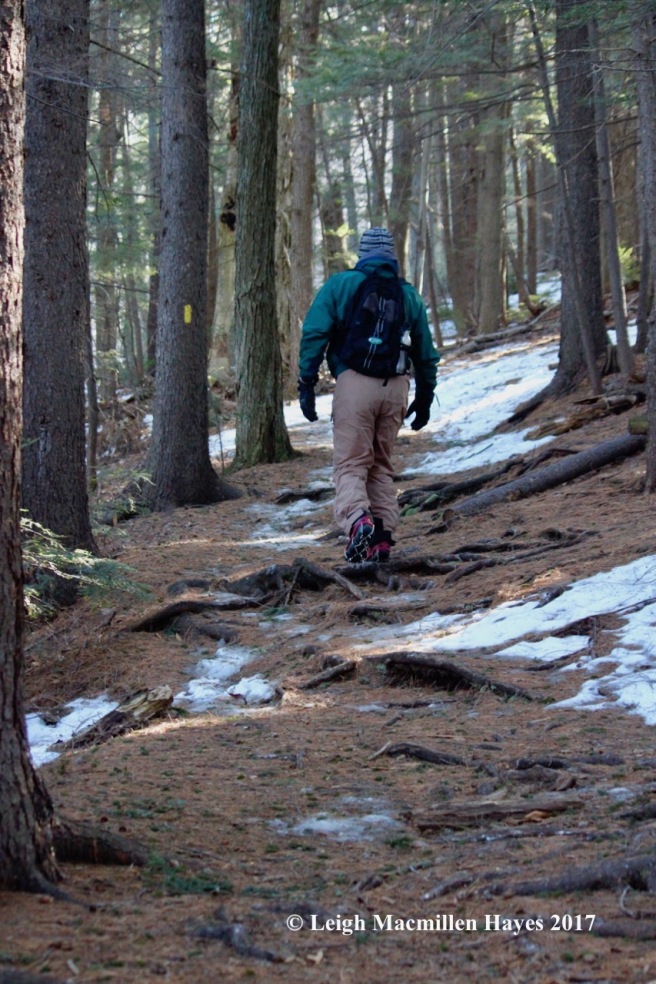 Within minutes, we went from a snow-packed trail to bare ground on a ridge under the thick canopy of spruce and hemlocks. It didn’t last long, but we enjoyed it while it lasted.

And then we came upon another trail sign, this one directing us to a spur that led to Allen’s Ledge.

And here, my guy, who was certain the namesake was his alone, welcomed me as if he were king of the mountain. Truth be told it was named for Jack Allen, a guide and hunter, who shared my guy’s love of telling a story. We were over a hundred years too late to meet Mr. Allen, but felt his presence all the same. 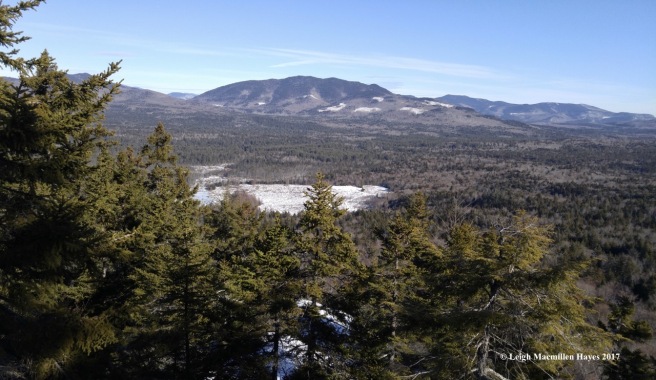 From here, the Swift River Intervale spread out before us and beyond, the mountains including the Moats.

A few minutes later, I spied another ledge and knew it must be my namesake for the spur trail was marked by pileated woodpecker chips and a chunk of scat–a capsule of ant skeletons surrounded by uric acid. Always a fun find.

The ledge wasn’t as long or view as expansive, but still, I’m certain it was named Leigh’s Ledge–the sign obviously buried in the snow. 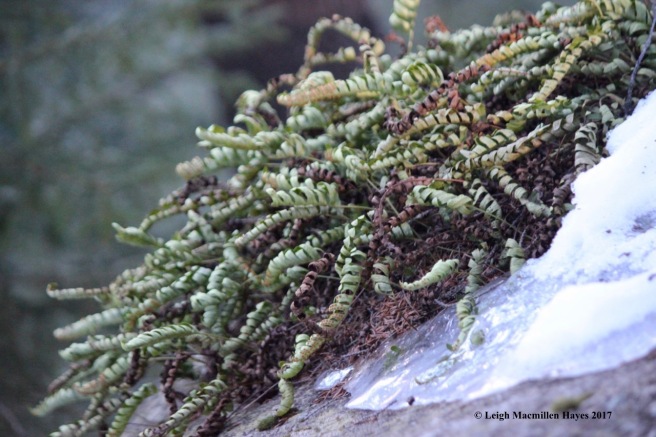 Onward and upward, the curled fashion of the common polypody reminded us that though our tickers were tocking, it was cold–in the teens at best.

As we climbed, the spruce and hemlocks spoke of their sharing habits, roots entwined as if hugging arms extended. 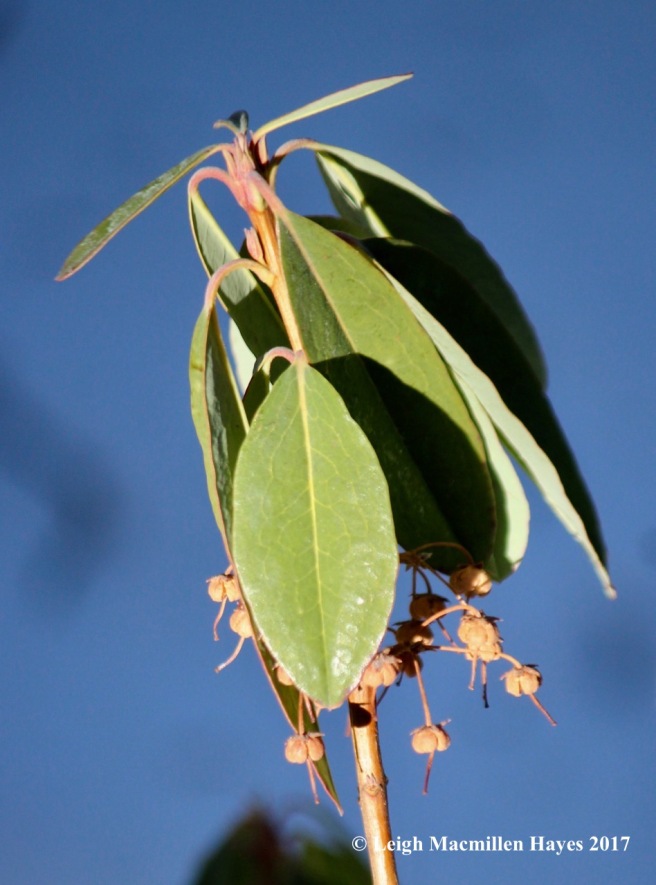 We knew we were approaching the summit when we spied the bell-like capsules of sheep laurel dangling below.

At last, our destination reached. And views embraced. We were warm and so was the sun. 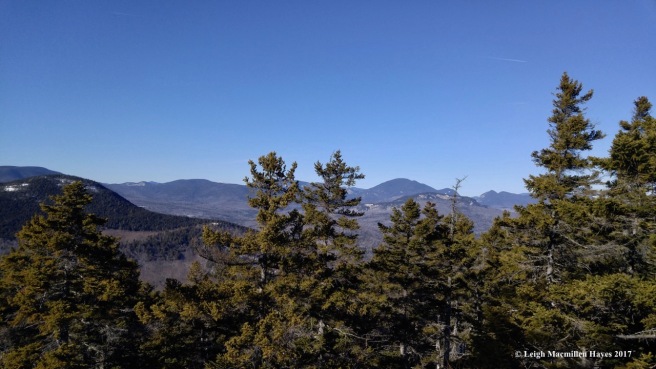 We took in the expanse to the north first.

And then turned south, where we found lunch rock. Two young men had settled in, chatting while enjoying the view, but they kindly decided to move on when we arrived.

PB&J with hot cocoa, followed by a treat that had made its way into my Christmas stocking. Two bites for each–because Guinness® is good for you! We could have napped here and may have, but two more young men arrived and so we gave the spot to them and moved on down the trail, heading toward the East Ledge.

The beginning of our descent found us watching each footstep along a winding and rugged trail marked by ice. Sometimes we sat and slid as we made our way to the base of the summit cliffs. I wish I’d taken more photos, beautiful and remote as it was, but . . . I was focused on one step at a time. 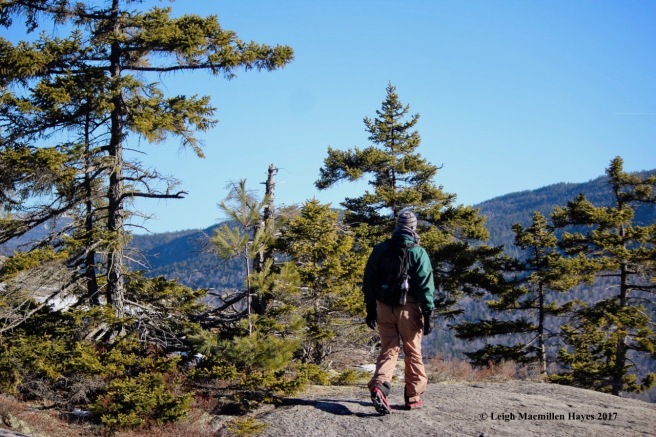 We paused at one point to allow about 15 MIT students to pass by and then we reached the East Ledge and views of the Sandwich Range.

It was here that we turned to look back and the name of the mountain began to make sense. I’d wondered about its name and thought that it might be for the shape of the mountain and the spikey spruce trees that grow upon it. Indeed.

Besides the views,  the ledge’s offered the maroonish-green leaves and berries of wintergreen, delighting with color, scent and taste in any season.

As we continued down the ledges, their layers bespoke legends–tales of the past, the present on their faces, with the future tucked inside.

Being on the southern side as we wound our way down and around, we came upon another boulder witnessing a bad hair day–and this time the common polypody fern indicated the warmer temps on this side of the mountain. A few more young people passed us on their way up and I commented to my guy that everyone seemed to be young on this mountain. “A fountain of youth,” he commented. I can’t say I was feeling 100% young, but yeah.

The final mile seemed to last forever. “I found a sign,” my guy said at last, a grin on his face as he pointed to what he thought was blank. We’d been searching for the sign where the loop began. Instead, we found this. What he didn’t see was a message jotted on the painted board. “Don’t give up on love.”

It seemed a fitting message for our Mondate, for Martin Luther King, Jr.’s birthday, for our nation and the world.

8 thoughts on “Don’t Give Up Mondate”