Yesterday it snowed and the air held its winter red-cheeked nip.

Today, five inches of fresh snow on the ground and stone walls with temps in the upper 40˚s–certainly a feeling of spring.

As I headed into my smiling place, I had high hopes of seeing the golden-crowned kinglets I heard and saw the other day when my fingers were too cold to snap a photo. So the pishing began–me repeating “pish” over and over again in hopes of a repeat performance. No kinglets, but the chickadees came and followed me for a bit–I felt like the Pish Piper.

As I snowshoed, I spotted numerous  trees like this striped maple, broken and worthy of inspection. Each time, I stepped in for a closer look. And finally was rewarded.

A bull moose, like a buck deer, thrashes bushes and small saplings when the velvet on its antlers dries. It could be that the velvet itches. But it could also be a response to increasing testosterone and the need to scent mark. 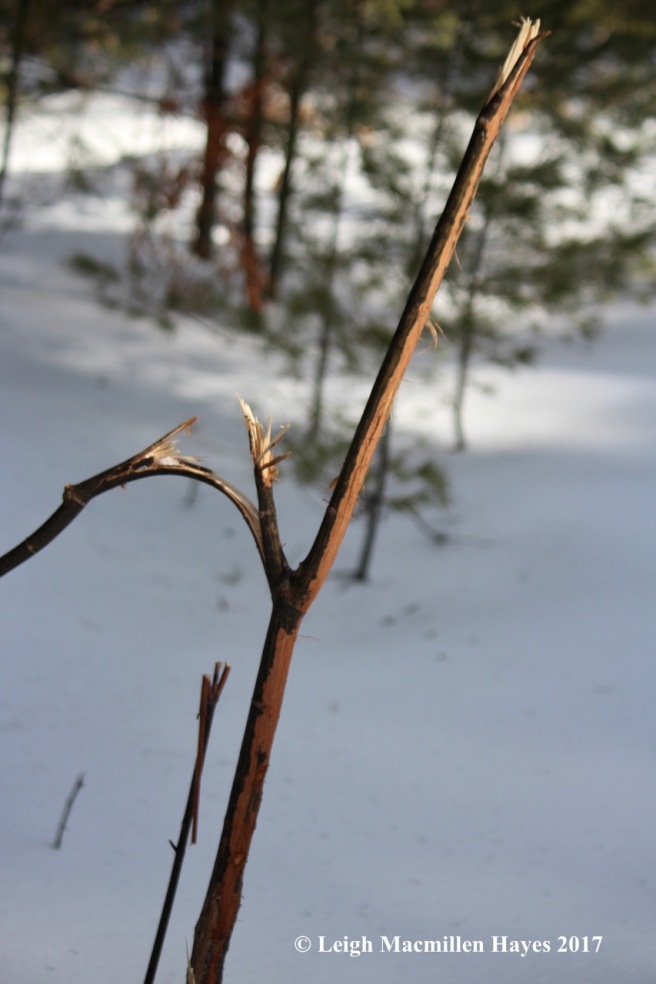 The frayed striped maple held messages I couldn’t read. But I had the joy of knowing they were there. And a better understanding of why this tree is called moosewood.

Taking a different route home, I spied the pattern of our neighborhood porcupine. Apparently it had made a journey during the overnight hours when the storm was still in progress.

I didn’t see any hemlock twigs scattered on the ground, but one nipped end starred me in the face from its suspended position on the branch of another tree.

And in the hemlock, yesterday’s snow gathered still on more nipped twigs. Porky has certainly been active. For now, he rests under the barn. 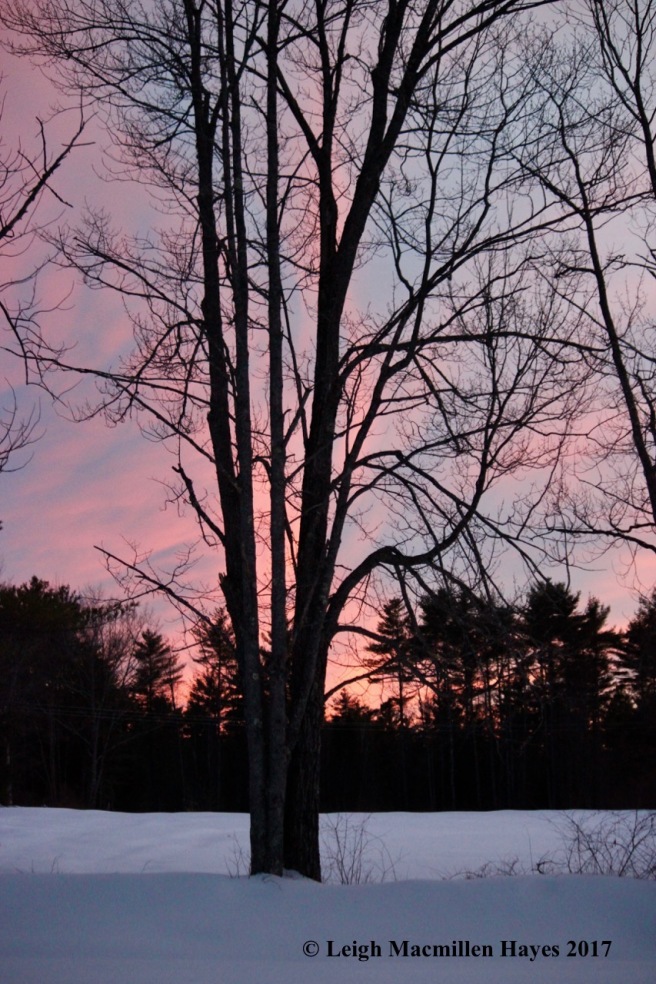 As the sun finally set on this beautiful day, I ran outside to capture the red sky. My mother used to say, “Red sky at night, sailors’ delight.” I’ve a feeling that there will be a red sky in the morning and the sailors will need to heed the warning. Another storm is pending.

Between the storms, I embraced the calm. And was rewarded.

Tonight, one more reward that was captured in our minds’ eyes–my guy turned on the deck light and called to me. We watched an opossum move across the deck and head to the spot where the shed meets the barn and all critters enter and depart–porcupines, raccoons, skunks, woodchucks and now an opossum. It was our first sighting of this homely mammal.  I’d wondered where it might be and haven’t seen its tracks since the first time I spied them just before Christmas.

Barns are meant to house animals, especially when they need to get out of a storm. Our animals just happen to live under the barn (well, all but the squirrels and mice that live in it), though I have to wonder how this menagerie embraces the calm as they coexist.

Between storms, seek calm and embrace it.

4 thoughts on “Embracing the Calm”