How could it be? We realized this past week that we’d only hiked in Sebago Lake State Park together once–thirty years ago. Oh, I’ve skied there, visited friends who were camping, and participated in several eighth grade class picnics back in my public education days.  But today we decided to remedy our hiking opportunity–or lack thereof. 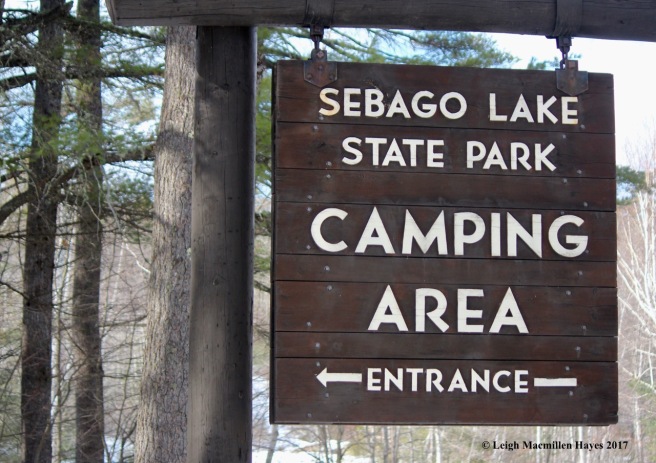 Our intention wasn’t to camp, but rather to explore the trails that circle around and cut through the 1,400-acre property. For those of you who know my guy, though we certainly haven’t spent a lot of time in the park, he does feel a certain affinity–to the brown stain that the park staff purchases in five gallon buckets from his hardware store. 🙂 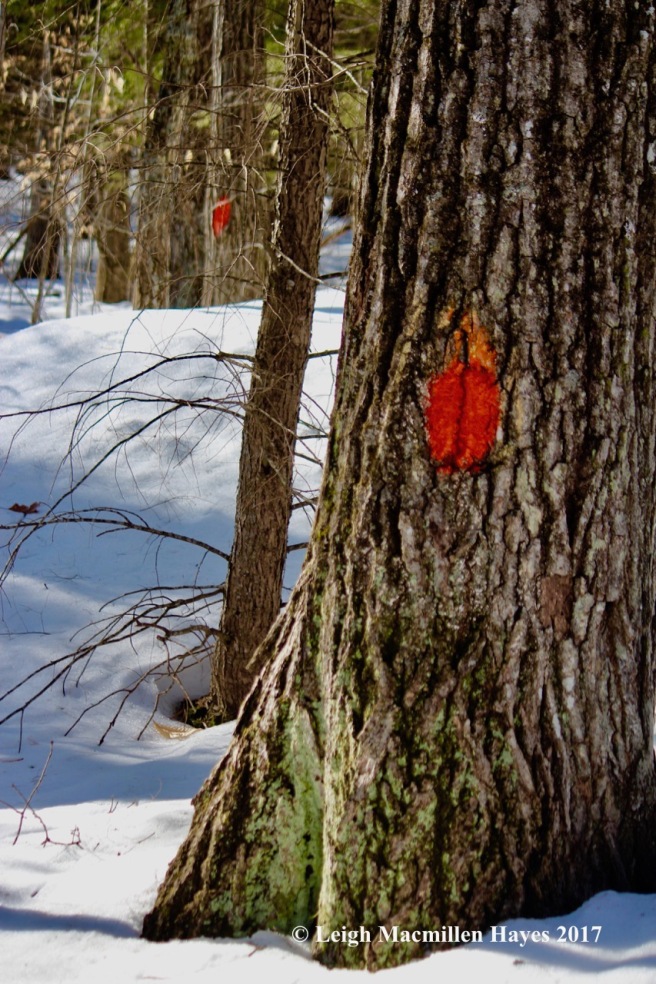 After looking at a map near the entry booth, we headed off on a trail marked with orange blazes. Or so we thought. Until we realized we were following the boundary. But all the orange paint made me think of our young neighbor, Kyan, and as it turns out he was on my brain for a great reason–he’s been in remission for the past six months following his bone marrow transplant and today had his central line removed. No wonder we spent an hour following those orange blazes. All the while, however, we did think the trails were poorly marked. 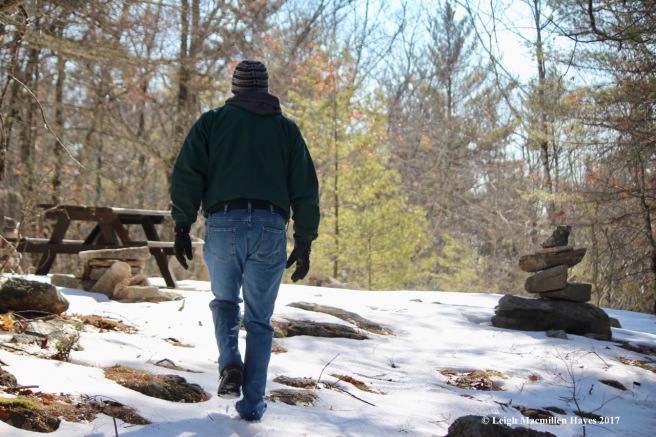 Unwittingly, we spotted a bit of brown–on the picnic table. We appeared to be on a high spot, home to the table and a cairn garden.

I’m of several minds when it comes to cairns. I know that some are historical and symbolic and others mark trails, but these, though each different in sculptural form, bothered me.

While my guy saw them as offering hikers something to do, I saw them as disruptive to the natural landscape. That being said, the landscape was formed by a glacier and these pieces spoke to the bedrock geology of the Sebago pluton with their pinkish coloration.

Turns out we were at the summit of the Lookout Trail, the highest point in the park at 499 feet. And behind the cairn park, we found the trail itself, blazed with red triangles, which we followed down to the campground road where we found a map–worth kneeling and worshiping. Well, actually, given the snow depth, that was the easiest way to read it. From that point forward, we found “You Are Here” maps whenever trails intersected, though we did tend to wander off occasionally. 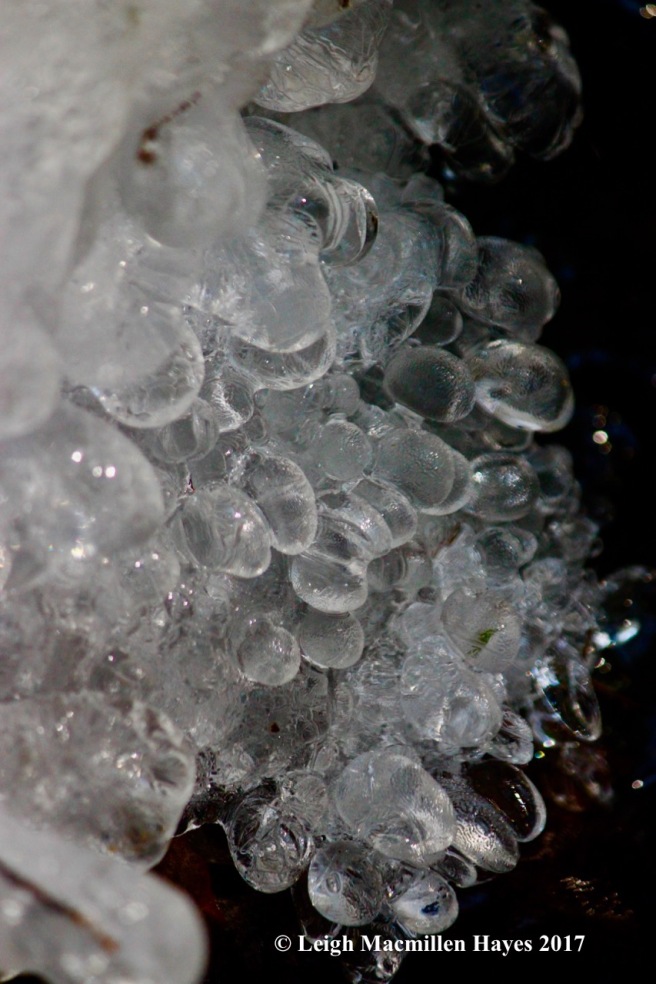 Over a brook, where balls of ice formed, 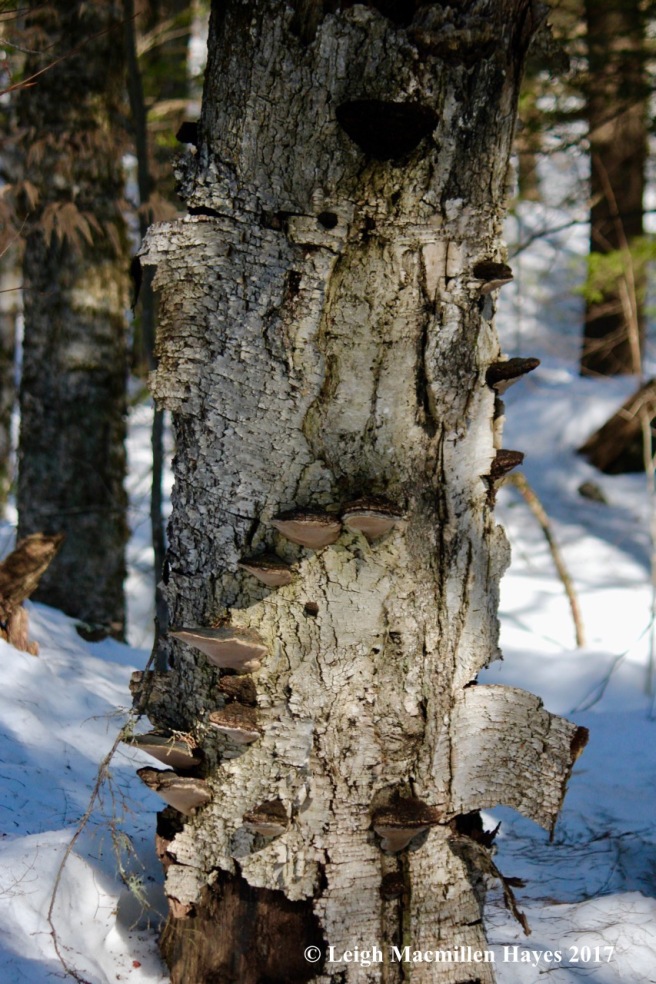 and through woods featuring the braided ridges of black locust bark, we hiked.

And then we reached the beach. On Sebago Lake. 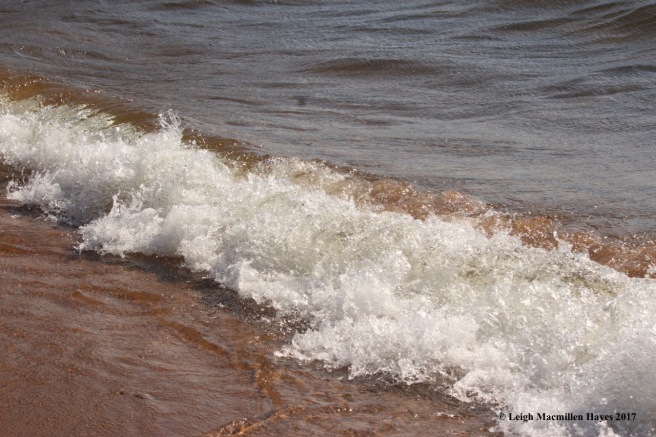 The wind had kicked up the waves and it felt almost ocean like. Almost.

Certainly, tree roots beside the lake spoke to wave action and higher tides (no, the lake doesn’t have a tide, but in storms and floods it must surge higher). Beside the water, a red maple and pitch pine tree embraced from their root source.

The bark of the pitch pine featured its reddish plates surrounded by deep furrows. 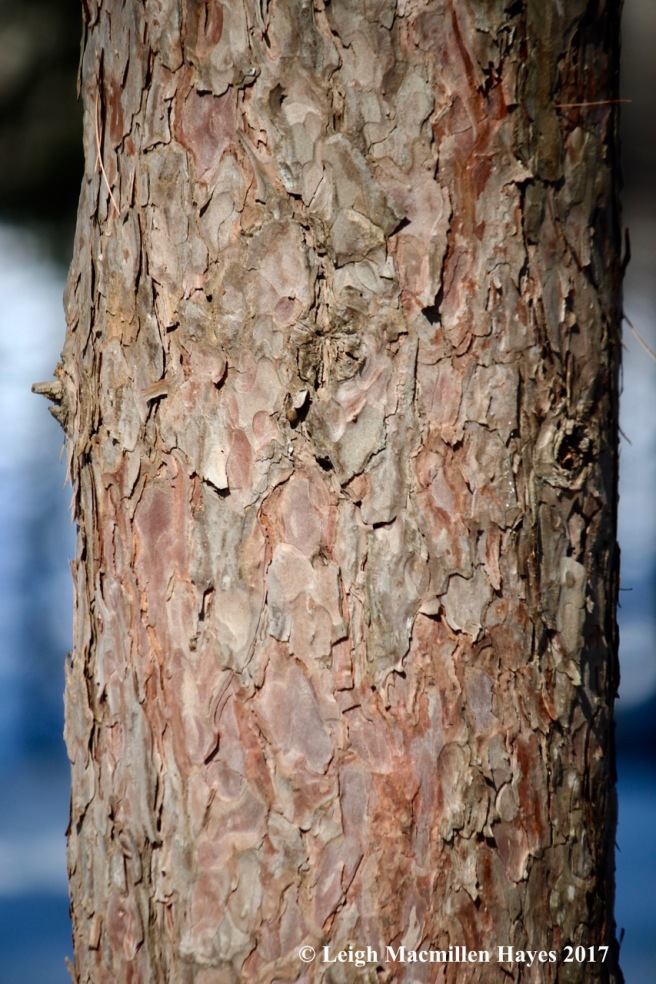 While it’s similar to red pine bark that grows nearby, there are subtle differences–red pine bark being plated but much thinner and tighter to the trunk. Plus, the pitch pine has bundles of three needles, while the red features two needles. 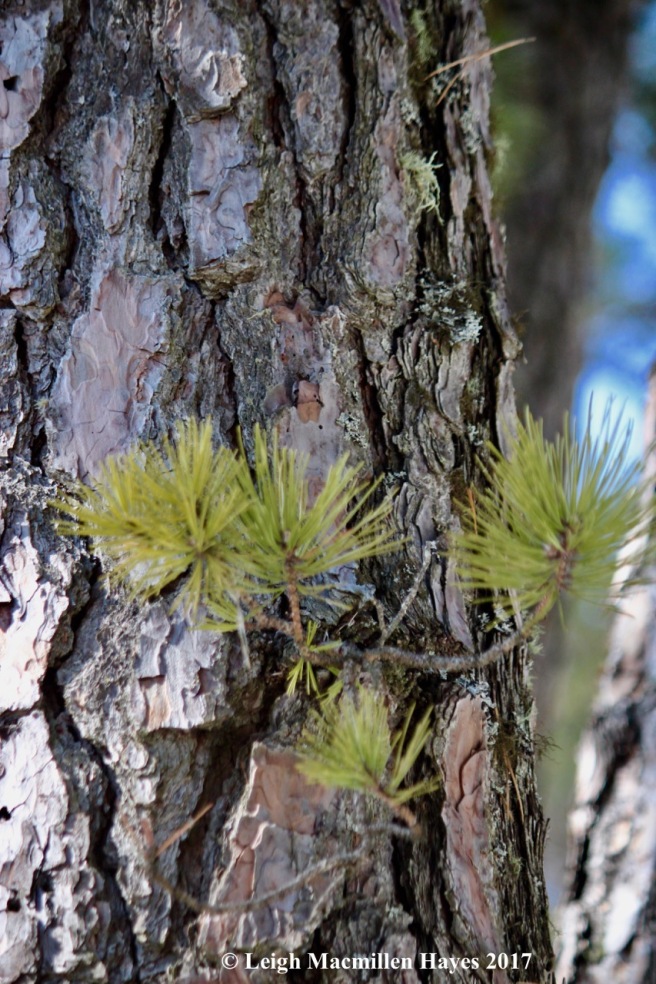 The other unique characteristic of pitch pines, their epicormic sprouting of needles on the trunk that grow from dormant buds on the bark. 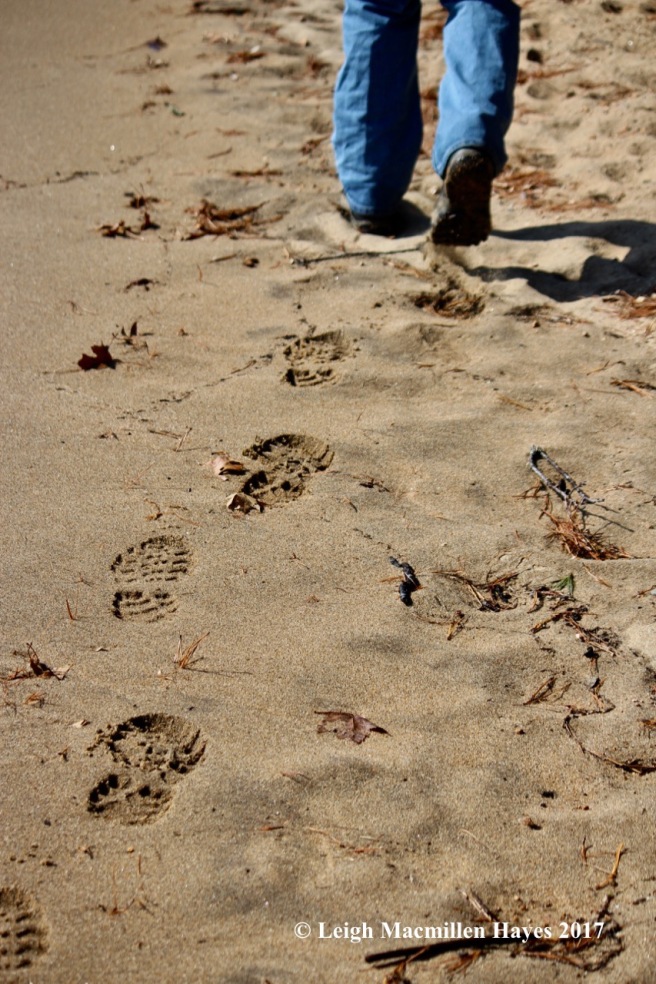 Eventually, we moved on, leaving prints in our wake.

Our substrate switched from snow to sand and back to snow, which we much preferred.

Before we turned away from the beach, we found the sand goddess eyeing the world. Again, we noted the orange and thought of Ky, but didn’t truly realize its significance.

Into the picnic area we moved, after watching a few deer who eventually flashed their white tails before moving on. Lunch table beckoned us. It needs some fresh stain–there’s job security in that thought–for the park staff and my guy. 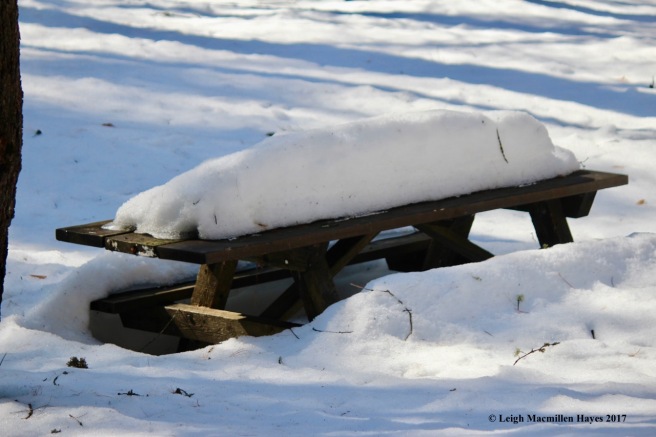 Some tables spoke to the snow depth.

After we finished our sandwiches, we discovered that others had used the picnic ground–for a cache site. Somewhere in the park, at least one red squirrel prospered through the winter.

Our journey took us past the glacial kettle formed by the melting of large blocks of ice.

And then we figured out our final trails to follow. 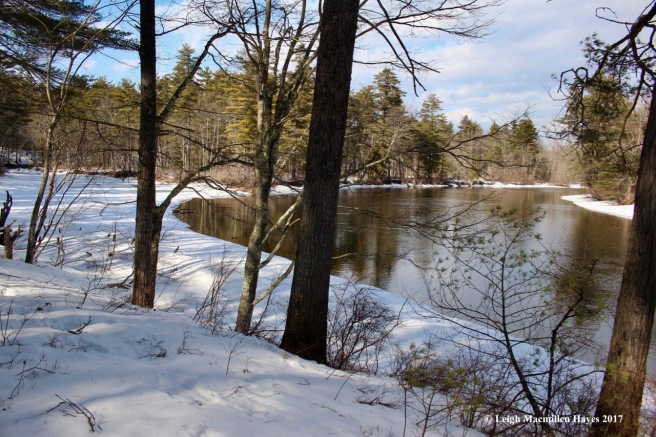 We crossed Thompson Point Road and followed the oxbows and meandering of Songo River, which actually proved to be bittersweet. I’d only been on the river twice and both with the milfoil team of the Lakes Environmental Association. As we hiked beside it today, I recognized various points Adam Perron, the milfoil dude had pointed out. Again I say, RIP Adam.

At last we reached Horseshoe Bog, home to one of those picnic tables needing work. You know who spied it from a mile off.

He also spied the work of others and eagerly showed me.

My what big teeth grooves a beaver leaves. 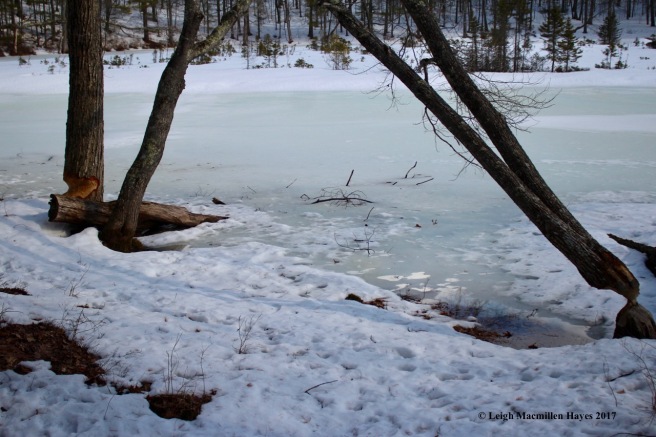 It left its mark everywhere. 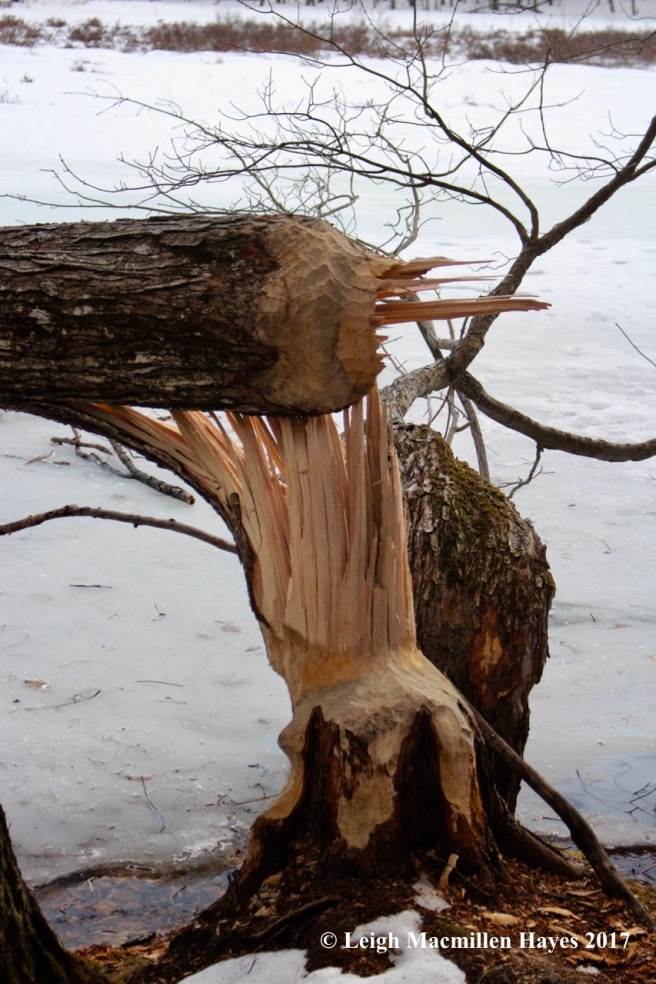 And sometimes such works met the forces of nature and all was well that ended well.

The same could be said for us. We began the day on a trail that wasn’t and ended by trying to follow a spur trail out, that we couldn’t quite locate (except for the sign at the beginning that identified it as a spur trail) and so we bushwhacked and then an anomaly caught our eyes–snow on a structure, which turned out to be the entry booth from which we’d begun our expedition.

As it turns out, we realized that our adventure thirty years ago was on the east (Casco) side of the park and this was our first visit to the west (Naples) side. Here’s hoping it doesn’t take us thirty more years to return for another Mondate–indeed.

4 thoughts on “Hiking the West Mondate”