Given yesterday’s rain and fog, March forgot its lion-like nature and seemed rather tame. Or so we thought.

The wind continued to blow, but was down a few knots when two friends and I noticed this bark hanging out to dry much the way laundry does.

Our intention was to explore Lakes Environmental Association‘s newly acquired property in North Bridgton. The 325-acre property was the gift of the David and Carol Hancock Charitable Trust. And based on the wildlife signs we encountered today, it offers a valuable corridor. It’s all of that plus it’s part of the Highland Lake watershed and ultimately the Sebago Lake watershed. And it will provide a place for research, public education and recreation.

And so today, I followed Marita Wiser, author of HIKES & Woodland Walks in and around Maine’s LAKES Region and JoAnne Diller, who has conquered all 100 4,000-foot peaks. Our intention was to skirt around the outside of the wetland, but curiosity got the better of us. 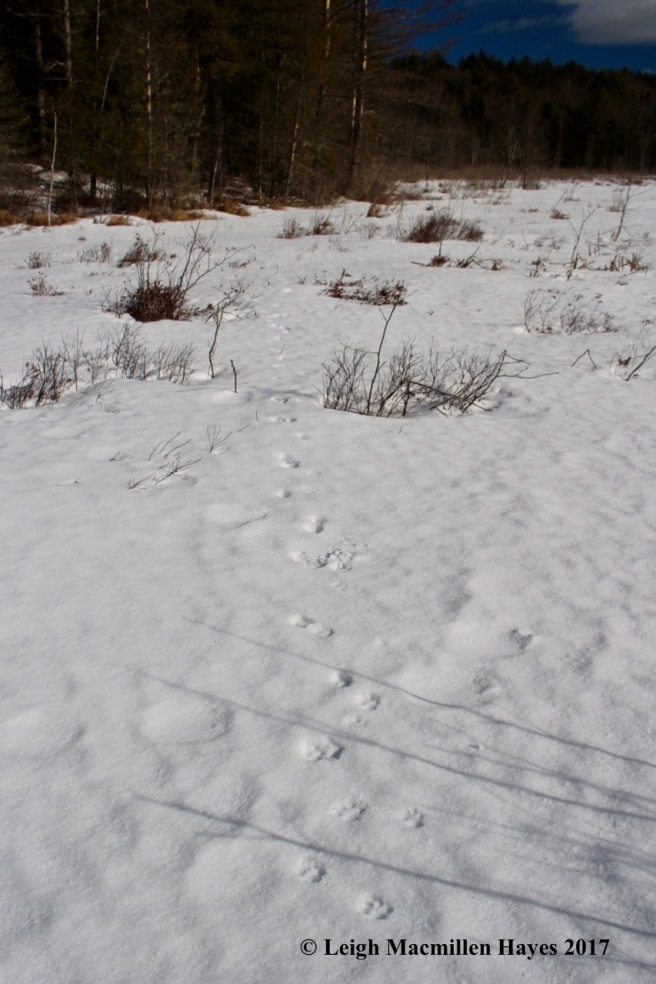 For a bit, we followed the tracks of several coyotes who had traveled through rather recently given that we could clearly see the toes, nails and X between pads .

And then we found a set of prints, also coyote, that appeared to be even fresher. What made us wonder were the drag marks we saw in various places associated with the tracks, which we don’t often see.  It was obvious that the mammal was trotting give the sets of four prints in a backward C fashion. But was it dragging its tail because it was sinking in a bit, much as we were? Or was it dragging some prey? We never did figure it out, but enjoyed the chance to wonder.

We do know that it led us to a heron nest high up in a tree. I’d only visited the property twice before, in the early summer and had seen another heron nest, but this one was new to me. Such big birds. Such little nests given that they raise three or four young who grow as big as their parents while waiting to fledge. 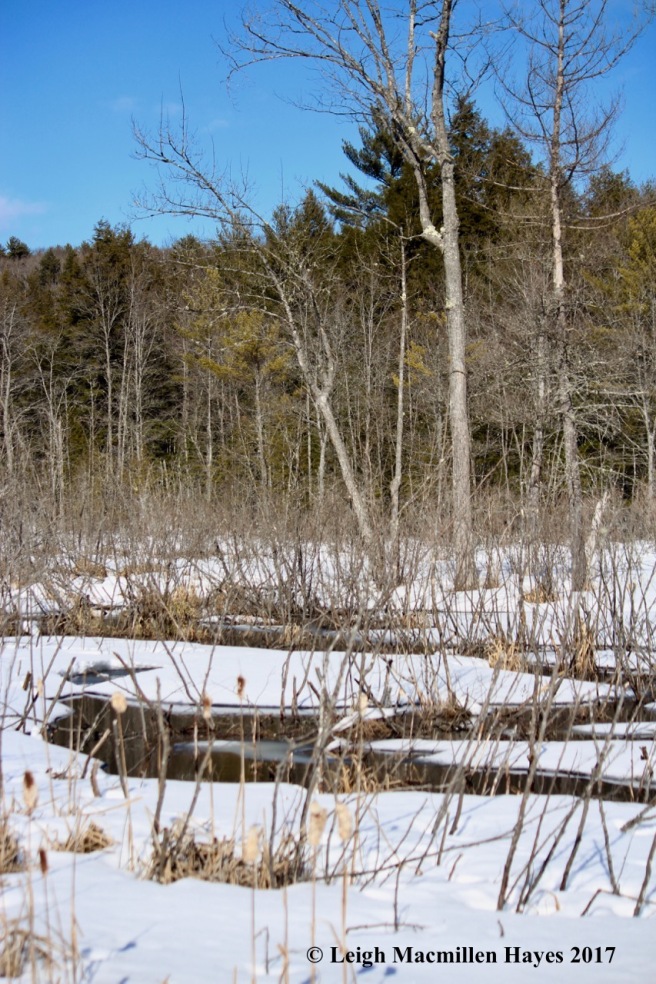 Though we could feel the wind on our faces, we enjoyed the sunshine as we journeyed on through this special place. Soon this world will change and so we were rejoicing in the opportunity to view it from such an upclose perspective.

Our next stop was one of the beaver lodges. It appeared that no one was home, given the fact that there was no meltdown at the top and no mammal tracks leading to or from it.

Instead, we followed faded weasel tracks presumably made by an otter, to another lodge, where the top was exposed.

As we circled around behind it, we noted that many visits had been made.

And then we turned again, to another heron nest that I recognized. During my June visit, an adult had flown in, indicating there may have been young in the nest. 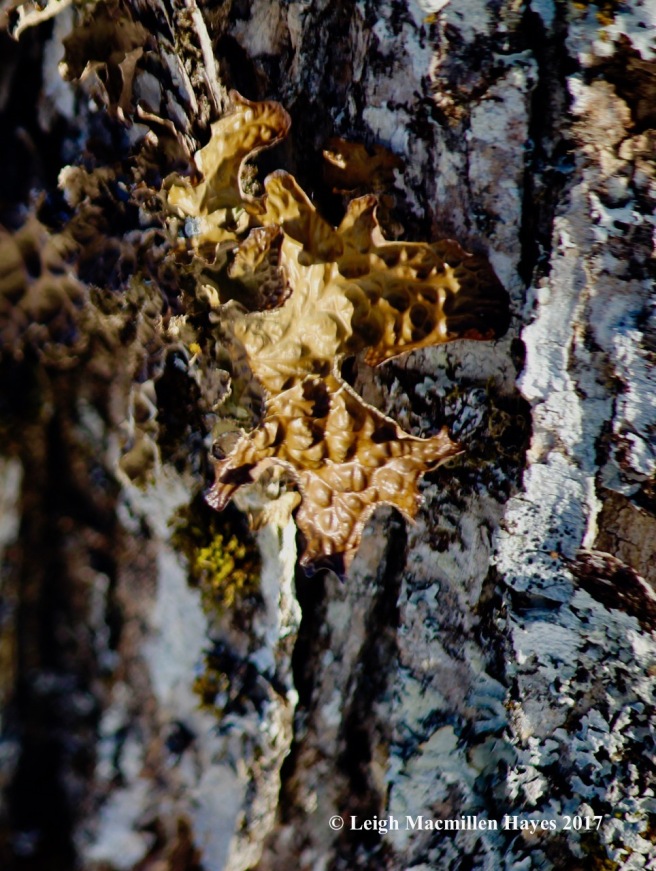 From there, we paused briefly to admire some lungwort that was the brownest and driest I’ve ever seen, especially given yesterday’s rain and today’s mixed precipitation.

And then our eyes were suddenly drawn to a line of lumps in the snow and we realized we were standing on the infinity pool created by a beaver dam.

Being mighty explorers, Marita led the way and we climbed up and over a hemlock hill to garner a closer look. And then JoAnne led us onto a little island where we stood and took in the views. 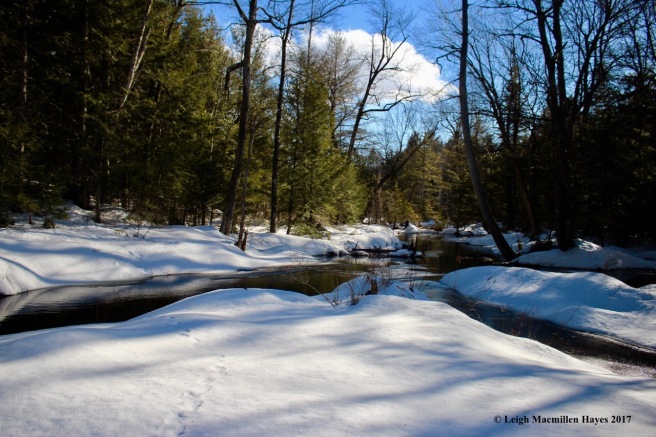 Tracks leading to the water indicated we weren’t the only ones who had ventured this way. But . . . no sign of beaver activity.

Back up over the hill we tramped and suddenly our eyes began to focus . . . 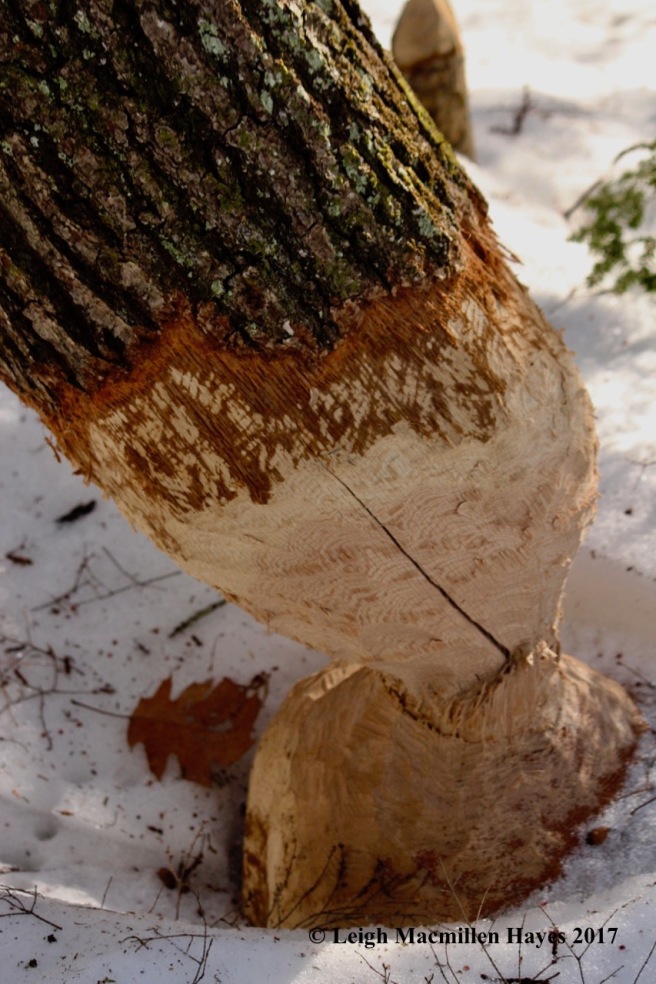 With our imagination wheels turning, we saw a sculpture of a pregnant woman. 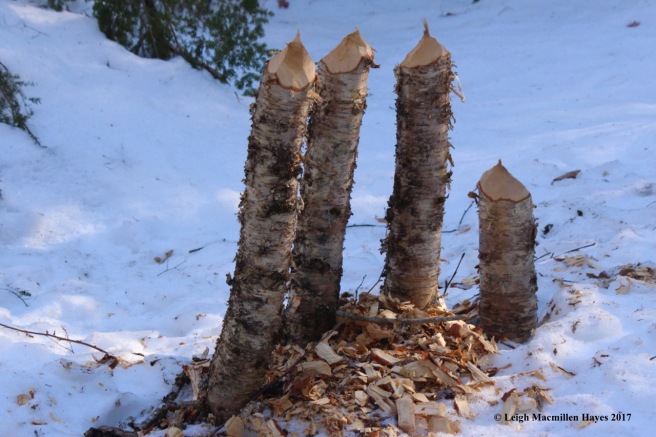 And marveled at the amount of fresh works everywhere.

Their path was well traveled and led us to more. 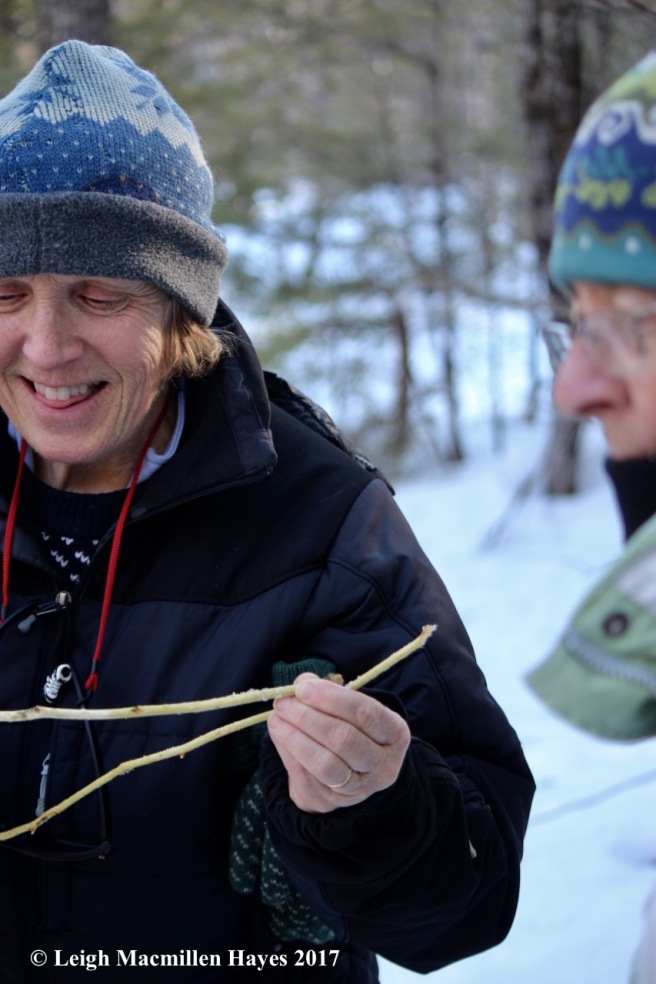 We even spied beaver chews, the snack of choice. 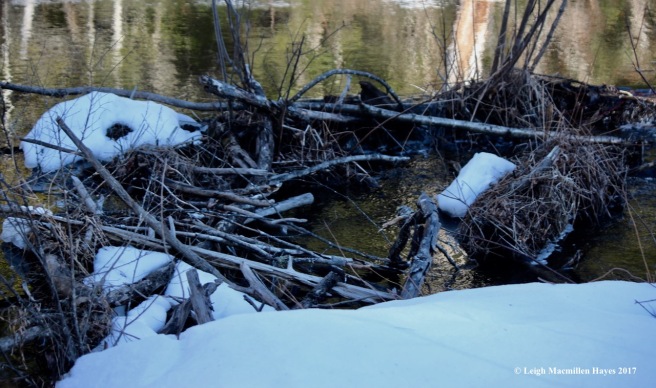 And another smaller dam.

Eventually, we left the beavers behind and continued across the hardwood/hemlock/pine forest, crossing a couple of skid roads before finally following one out, sharing stories and future plans as we hiked.

For this day that came in like a lion, we were thankful for the opportunity to enjoy its more lioness form and to roar with our own joy and laughter shared.

4 thoughts on “From Lion to Lioness”