Once the snow melts it will be more difficult for me to wander and wonder in the woods I explore all winter given its spring/summer water level and logging slash. And so I make the most of these days–trying to notice as much as I can before I can notice no more (or at least until next winter). 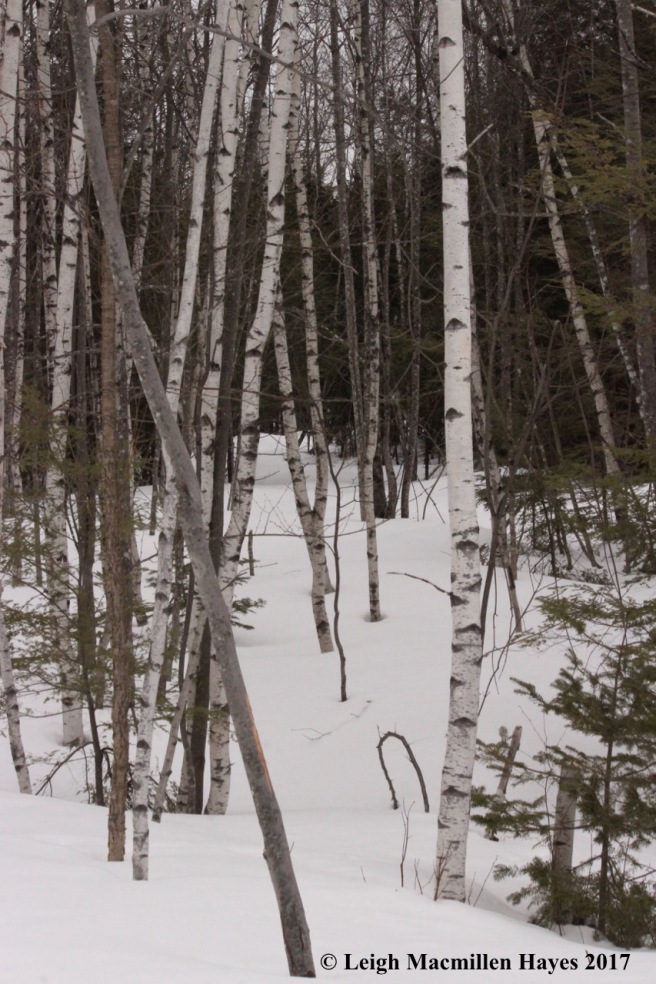 Though I’d promised myself I’d not go again in an effort to not disturb the deer, promises are meant to be broken. And from that came a lesson–the deer are sticking to the snowmobile trail and field edges where tender bark of young red maples and hemlocks, plus swelling buds meet their needs for the moment. So, it was OK that I broke my promise, for the deeper I tramped, the fewer tracks I encountered. 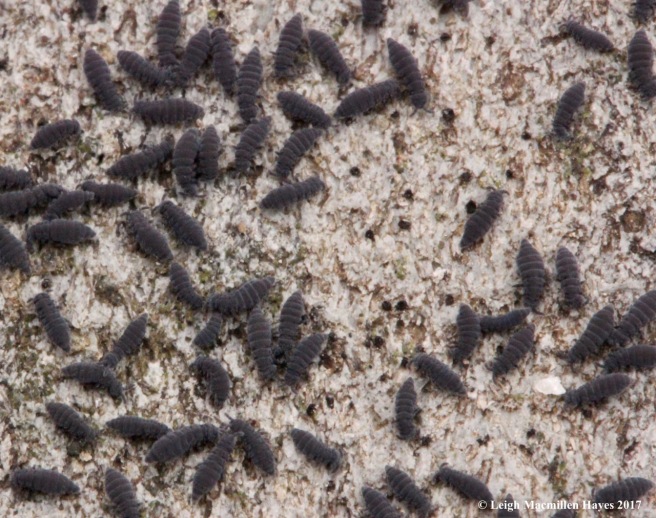 Today’s warmer temps in the low 40˚s found the springtails hopping about on any and all surfaces.

As is my habit, I checked on a pileated woodpecker hole when I saw bark and wood scattered atop the snow. Deep was this excavation in search of nourishment. 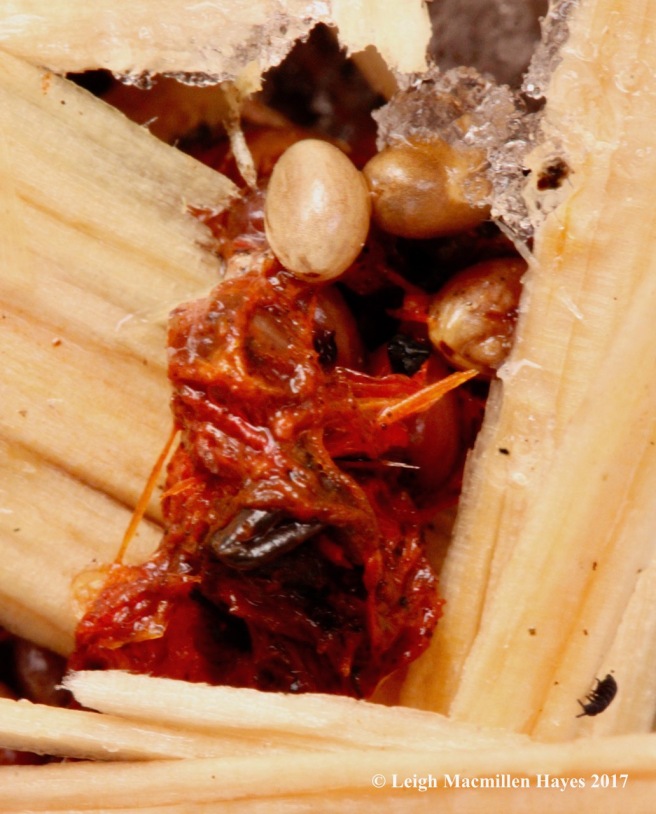 And chock full was the scat below, which contained insect body parts and seeds of the dreaded bittersweet. Beside the scat, a springtail sought to placate its own food needs which among other things includes plant material and animal remains. 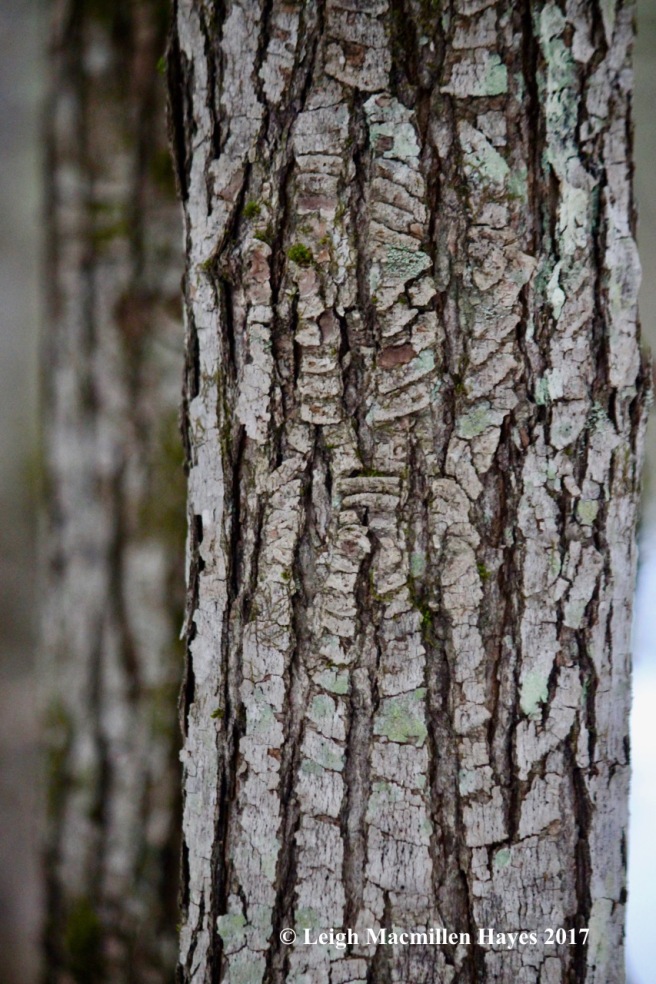 Turning to another tree, I landed on a perfect bull’s eye! The target fungus that affects many red maples makes for an easy ID. 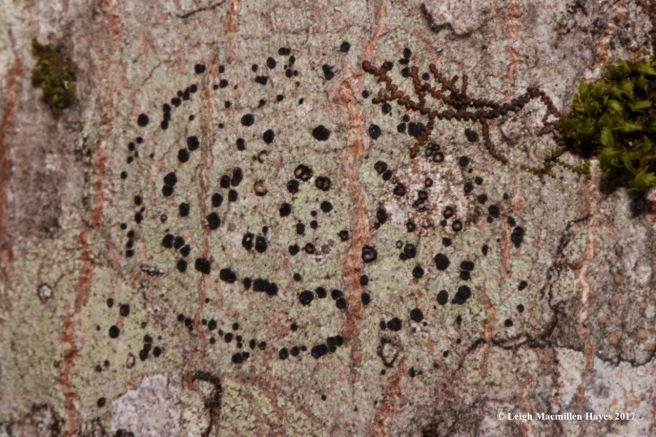 Lichens have also been a focus of late. What I like about this one, the circular green with the black disks of a crustose lichen (possibly bark disk lichen), was its location beside a liverwort (the beaded brown Frullania eboracensis) and a moss that I didn’t key out. Tree bark has its own structure and texture, but so often others also call it home. 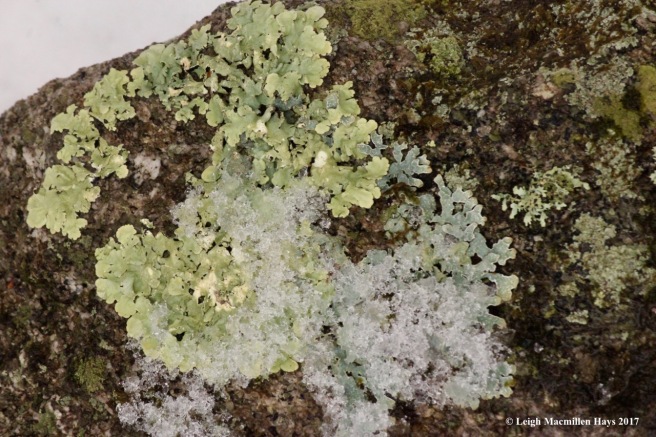 Rocks also serve as a substrate and this one featured a couple of leafy foliose shield lichens, their colors enhanced by yesterday’s inch of snow. 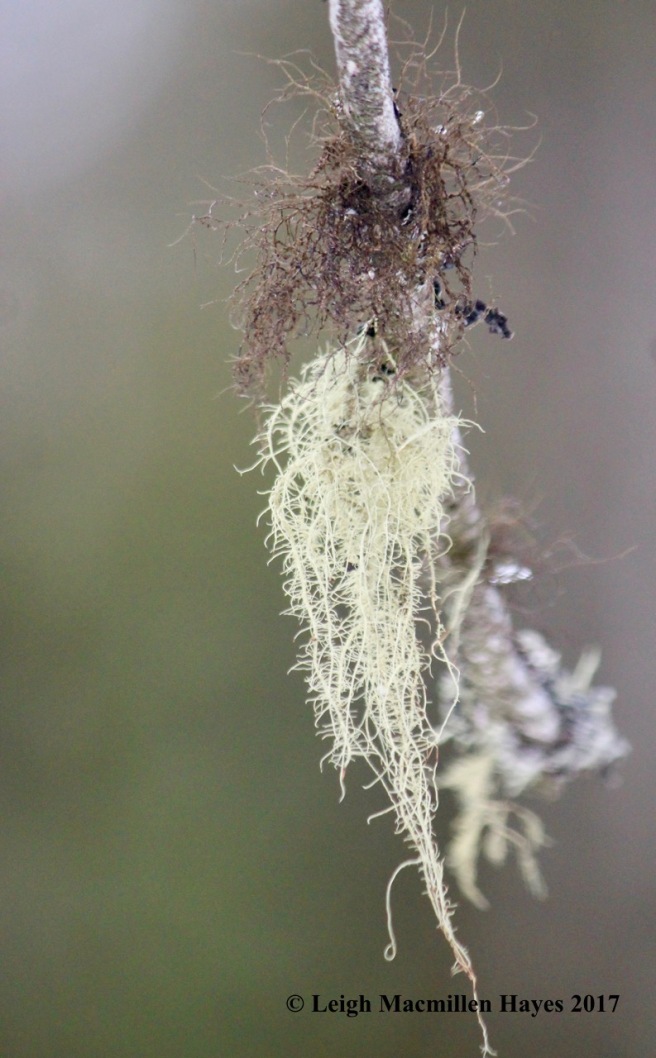 And dangling from a branch, two forms of fruticose (branching or fruit-like structure–) lichens. The dark is a hair lichen, while the green a beard–seems about right with the hair above the beard. 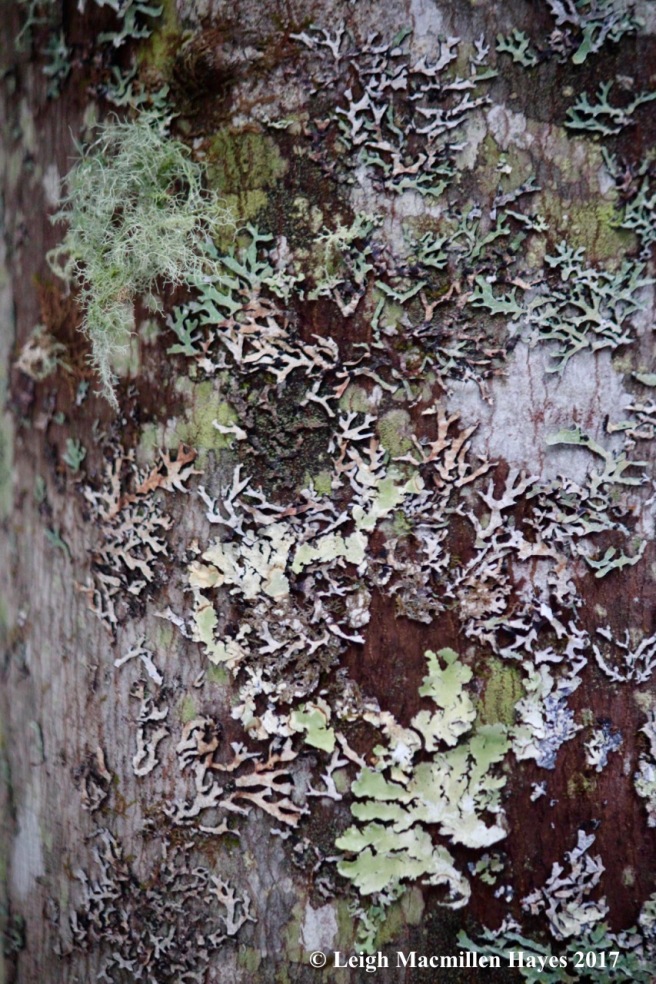 On another maple I spied a garden–you’ve got to liken it. (Corny joke that always manages to enter a lichen conversation.) 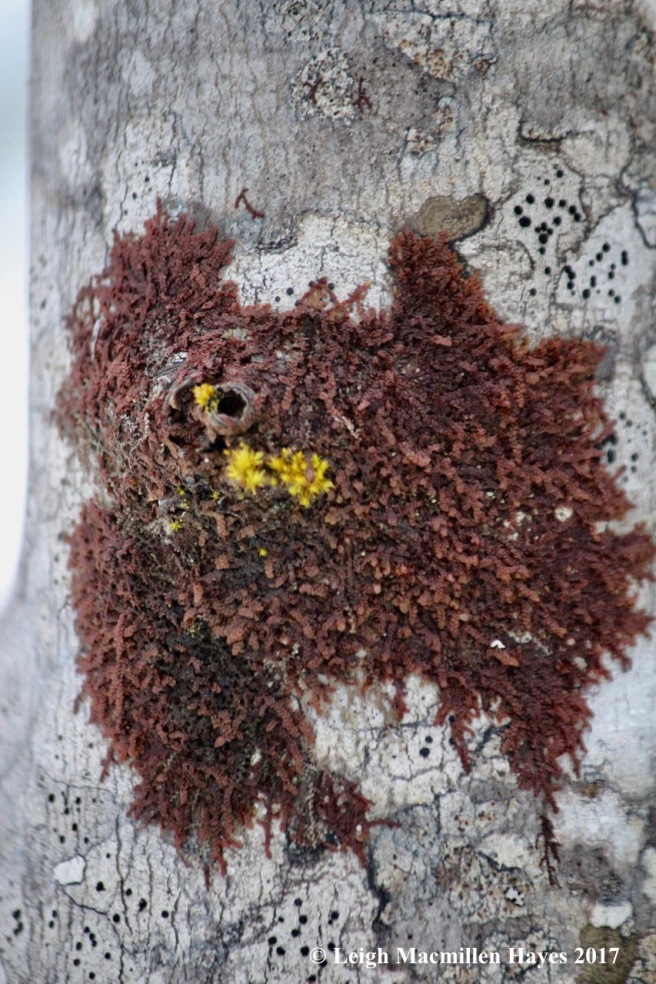 I’ve often paused beside Frullania eboracensis, a liverwort with no common name, but today several trees shared displays of mats called Frullania asagrayana, so named for a botanist and natural history professor at Harvard University from 1842-1873–Asa Gray. 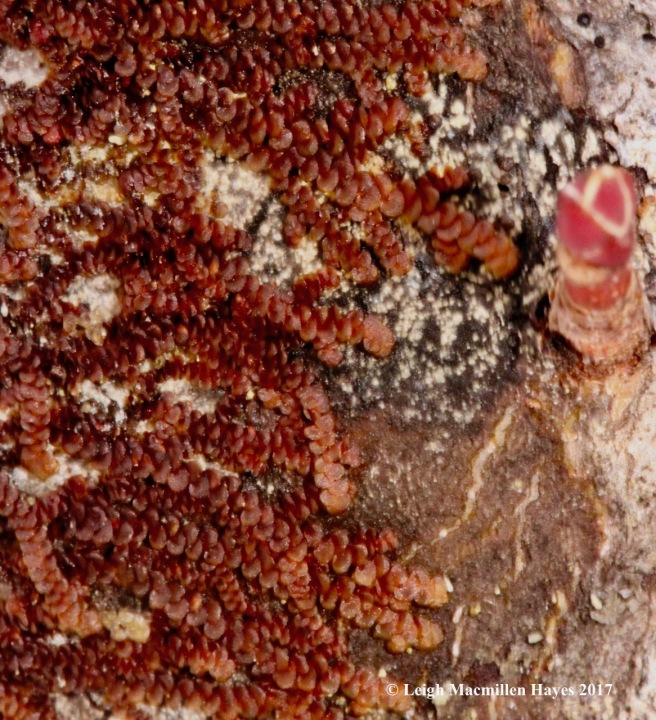 Its shiny, overlapping chain of red-brown leaves reminded me of caterpillars crawling along the maple bark.

Casting my eye elsewhere, steeplebush in its winter form offered an artistic presentation. 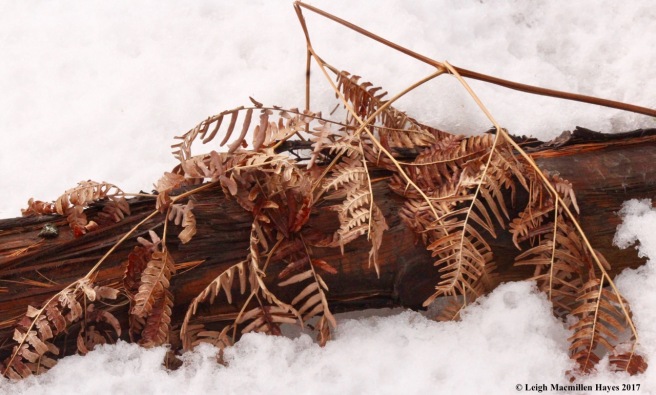 And as the snow melts, last year’s bracken fern made an appearance. 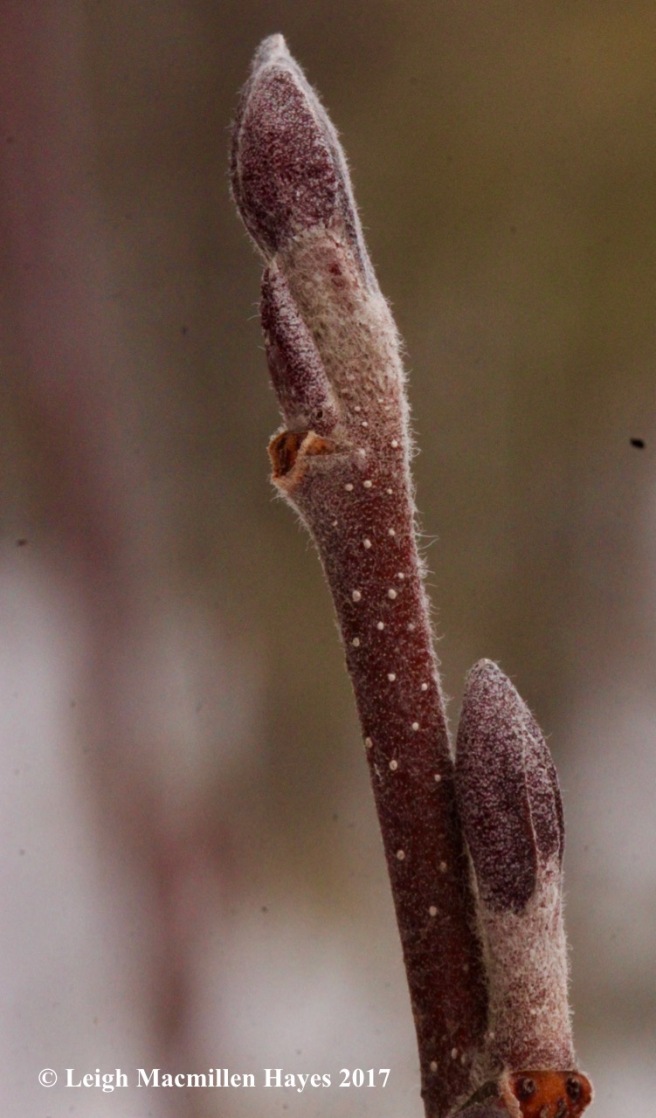 One last shrub made me stop. Minus any catkins or “cones” for which it is known, I had to think for a moment about the speckled alder. But those speckles or lenticels through which gas exchange occurs, and the buds and leaf scars were give aways. 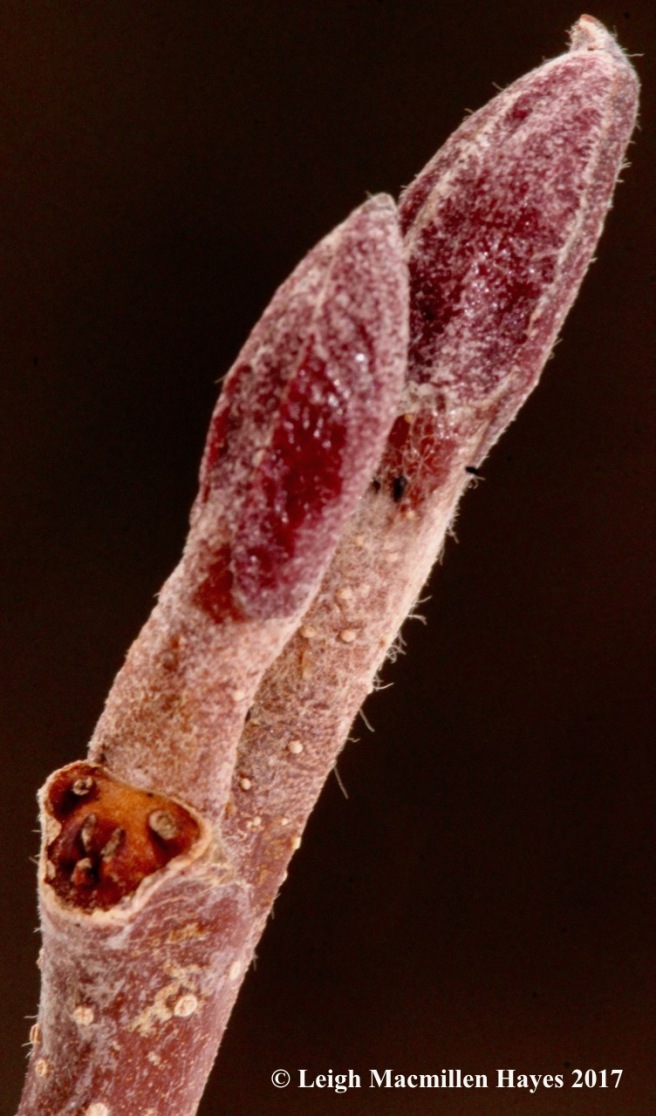 The two bud scales meet at their edges and look like miniature footballs. But it’s the bundle scars where leaves were formerly attached that make me laugh. That vascular system looks like a face–two round eyes, a funny shaped nose and a round mouth, as if it’s exclaiming, “Ohhh” or “Wow.” 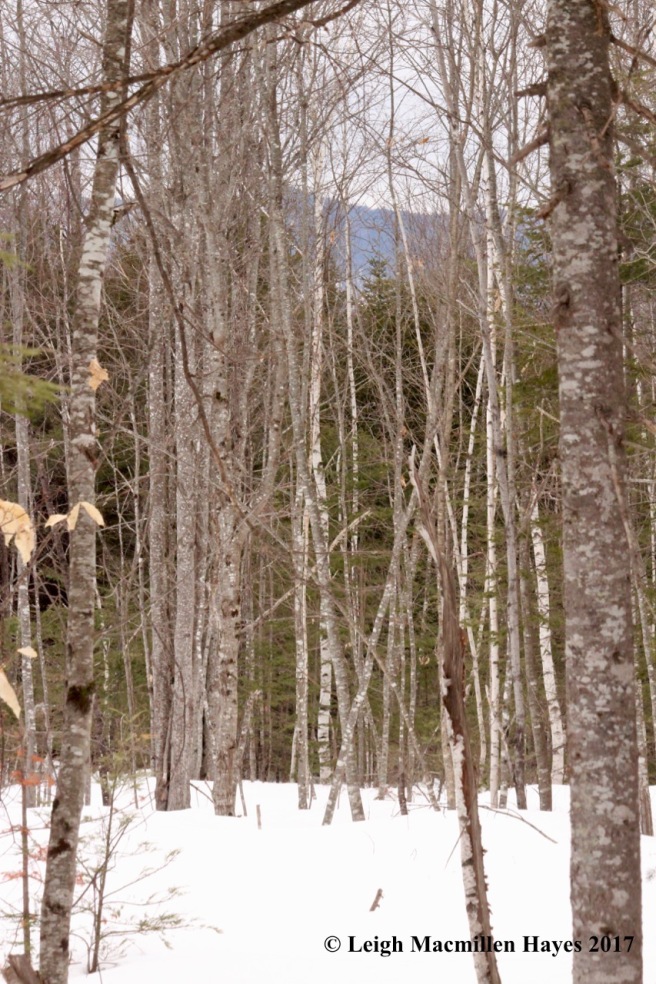 At last I reached my turn-around point. I could see Pleasant Mountain in the distance and knew where I was in the world. This is my place and I love every opportunity to celebrate it–naturally.