It would have been so easy to stay home last night, curled up on the couch beside my guy while watching the Bruins play hockey. After all, it was raining, 38˚, and downright raw. But . . . the email alert went out earlier in the day and the evening block party was scheduled to begin at 7:30. And so, I piled on the layers from a wick-away shirt to Under Armour, a turtleneck, sweater, LL Bean vest and rain jacket. I slipped into my Bogg boots and made sure I had the right gear–smartphone for photos, reflective vest, headlamp and flashlight. With a visored hat on my head to shield my glasses from the rain, I was finally ready. Out the door and down the road I went, headed to the Lakes Environmental Association‘s office for Big Night. 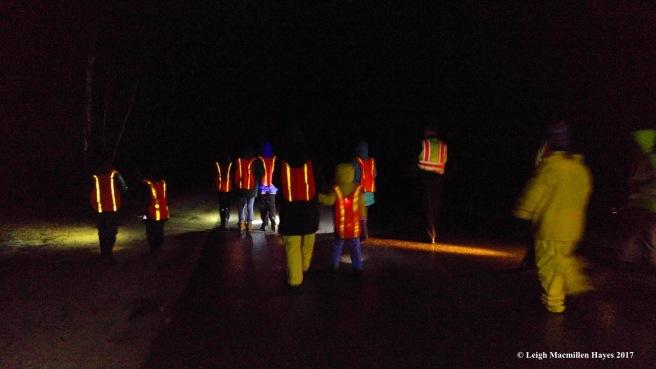 I wasn’t the only one crazy enough to attend the party. Our number was about twenty. I think the best part was that we ranged in age from 6 to almost 60, the latter being me–the oldest kid on the block. And in that mix, one teen who was celebrating his 15th birthday (Happy Birthday, Kyle), and several teens who had never attended before but came because one of their crowd was an annual participant. We even had two policemen in the mix–and though their job was to slow traffic and keep us safe, they had as much fun as we did completing our mission. 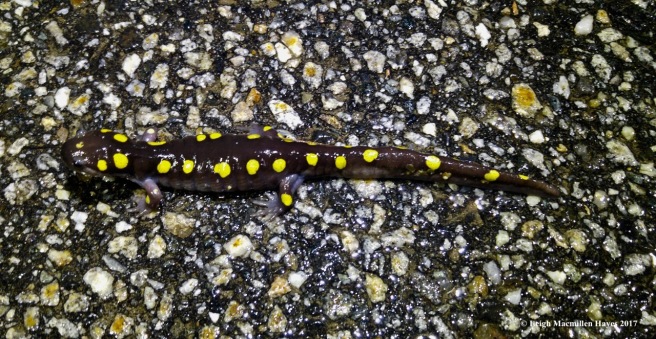 and spring peepers cross the road.

We did so for a while and then headed back to our vehicles. Just before reaching the spot where we’d all parked, someone spotted this redback salamander–I smiled because its the symbol of the Maine Master Naturalist Program.

We were wet. We were cold. And we were happy. As nature would have it, Big Night preceded Earth Day–a perfect beginning.

Earth Day began appropriately with a board meeting at Lakes Environmental, where among other topics, Dr. Ben Peierls, the new research director of LEA’s Maine Lake Science Center, shared with us his plans for the water quality testing laboratory. Ben addressed us first so that he could drive to Portland and join the March for Science. We continued our meeting, but were thankful for his representation. Meanwhile, directly outside and all around town, another gathering was taking place as many people participated in an Earth Day cleanup.

By the time I left the meeting pleased with all that had been accomplished, I was ready for a solo adventure to find out what the Earth wanted to share with me since most of the snow melted this past week. Despite being another raw day, or maybe because of it, the candy lichen brought a smile to my face. I think one of the cool things about this lichen is that even though its salmon-colored fruits stand atop stalks, this is really a crustose (crust-like) lichen, the bluish-green surface being the actual structure. 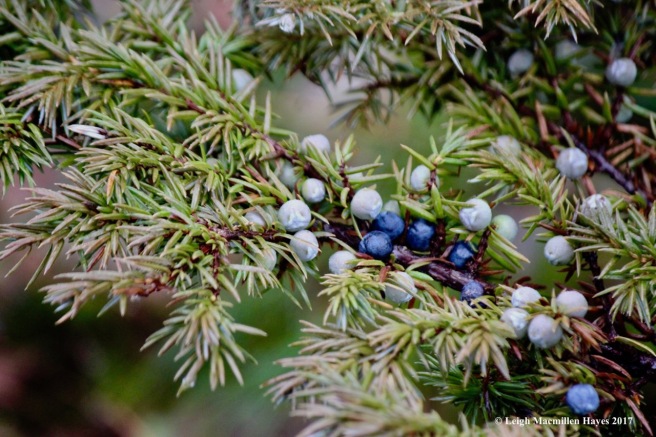 Near the candy lichen, the bright blue of some berries stood out on the common juniper. They remain on the shrubs all winter and it seemed only a wee bit ago they looked all withered. Today’s offerings were plump and pretty.

And then there were the raindrops, each waiting its turn to continue the journey toward the earth. I had to wonder what else it might fall upon before reaching its final destination–each little ball encapsulating nourishment.

One of the receivers, sheep laurel, which displayed its own new life. 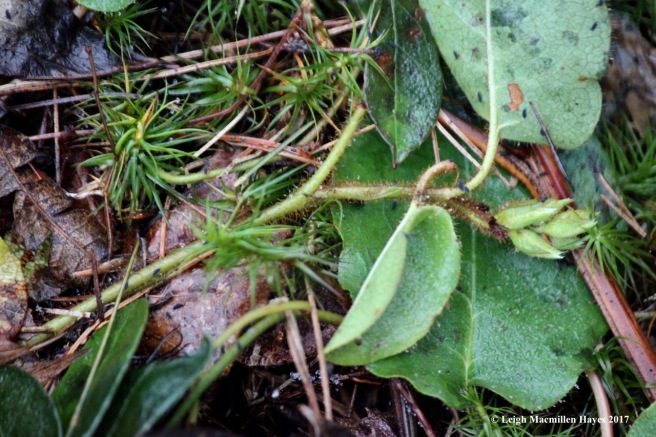 And at the base, trailing arbutus. One year ago, as I noted in my Earth Day post, it was already in bloom. This seemed a reminder from Mother Earth that we need to practice patience.

I continued my mosey, as quiet as could be, and so was startled when one large, exotic bird, and then another, and a third flew off from behind a stone wall. And then I realized they were wild turkeys–who truly are exotic if you take a look at all the colors in their feathers.

I’d been on the snowmobile trail, but traveling was difficult given some remaining icy snow and deep ruts filled with water. As if I needed an excuse, I decided to slip into the woods. One of my first delights–tinderconks lining a tree as I looked up.

But really, it was the thick moss coating at the top of the tree that first drew my attention. Several trees in the neighborhood displayed the same fashion.

My wander was aimless, taking me through boggy areas . . .

and small sections where snow still blanketed the ground.

Besides plenty of deer scat, I found prints . . . 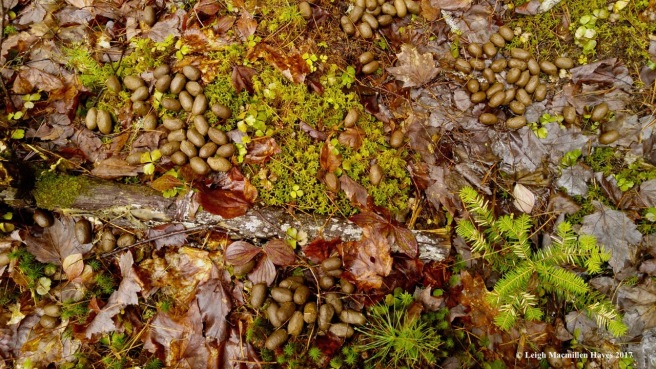 And though I suspect they’ve moved toward open water, there was plenty of evidence that the moose had also spent the winter in these woods.

They, too, have shed hair–preparing for the summer scene.

A couple of months ago, I’d been concerned that the moose had consumed all the tree buds, but the red maples showed me otherwise. 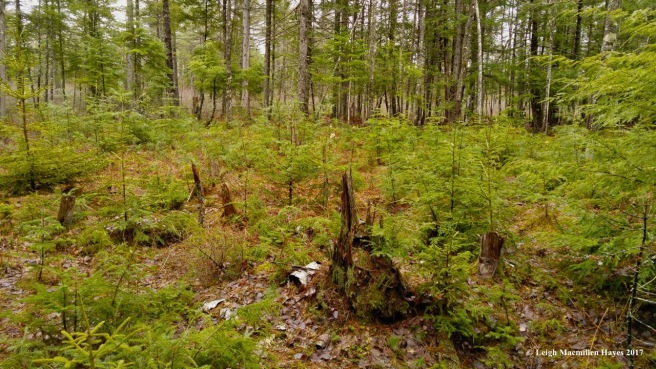 At one point, I stood for a while atop a rock and looked to the south.

And then to the north. It was as I stood there that I heard a repeated sound. It began with a few slow beats, and then a swift series of beats. All seemed muffled. It finally occurred to me that I was listening to a ruffed grouse. Eventually, I followed the drumming and came close to the one beating its wings against a log–the work of a displaying male. I didn’t bother to seek out the actual bird for I knew I’d startle it and it would fly off, so I let it drum in peace, thankful for the opportunity to at least hear it. Really, it was a first for me. Oh, I’ve possibly heard it before, but only today did I recognize it for what it was.

For a while, I was fake lost . . . and then I heard another repeated sound that lead me to a widowmaker and I knew exactly where I was. But where was the maker of the sound?

In a tree above me.

There were actually two barred owls and I was so thankful for the honor of listening to and watching them on this Earth Day.