Sunshine. Spring sunshine. Need I say more. No, but I will as I bring the focus to two of my favorite watering holes.

Of course, a visit to my first pond isn’t complete without a pause to recognize the power and the powerful.

As I approached the vernal pool, I heard not a sound. But, my heart filled when I spotted a clump of wood frog eggs. 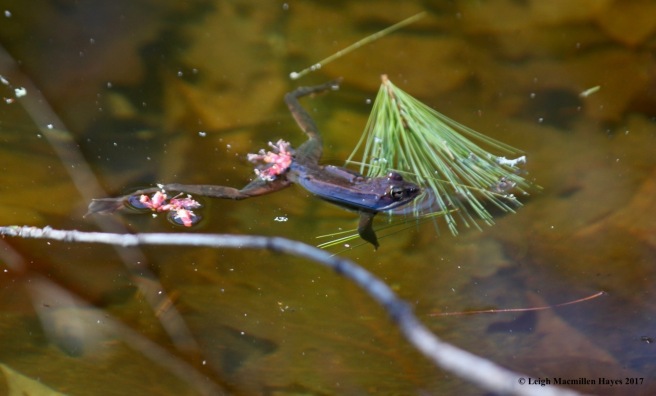 When our sons were youngsters, we always called it the frog pond rather than the vernal pool. And so it is . . . both.

After an hour spent in the pond’s midst, I drove to another–Holt Pond–where I decided to park on the corner of Perley and Grist Mill Roads. I wasn’t sure of the conditions on Grist Mill Road and figured that provided the perfect excuse for a walk and an opportunity to take in the sights along the way. Stepping out of the truck, pussy willows called to me . . . and to their pollinators.

And on the corner, a dried Queen Anne’s lace displayed its fireworks formation. 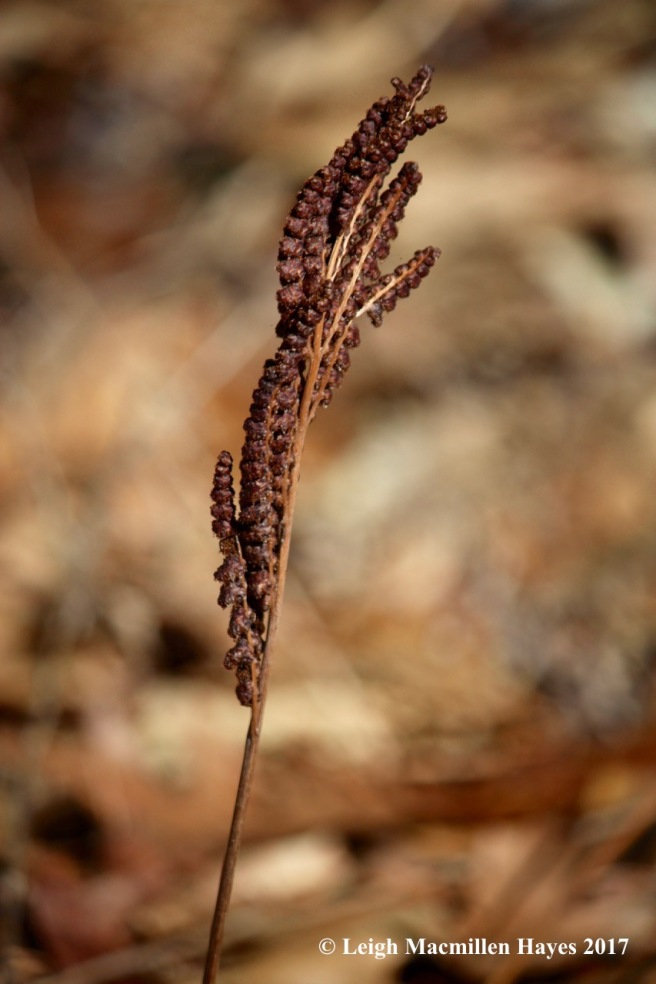 And I even found a few beaked hazelnuts still showing off their minute magenta flowers. 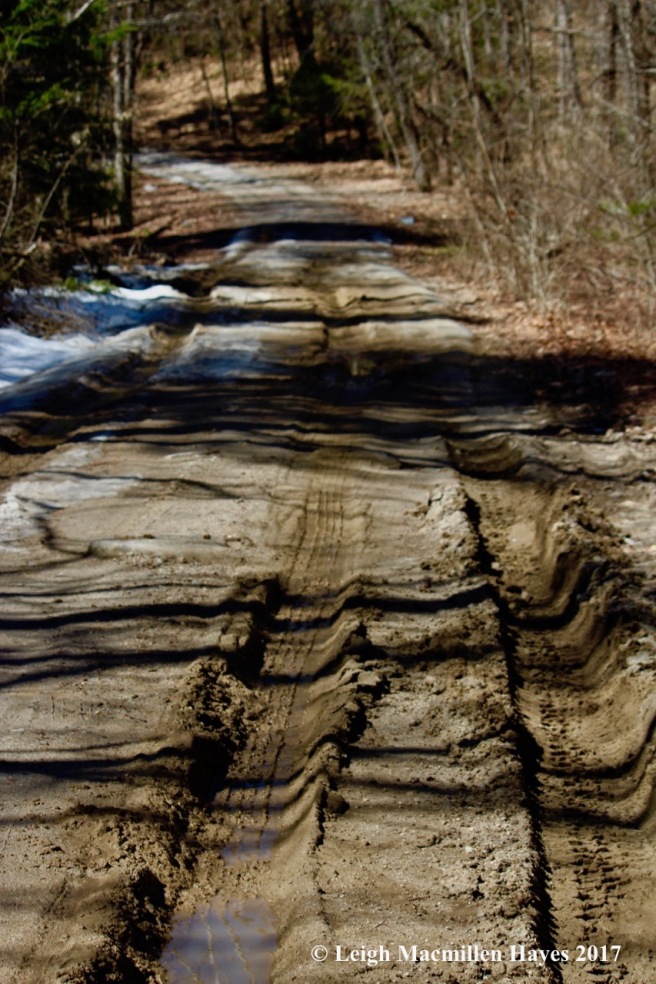 I knew by my observations that I’d made the right decision to walk in–both in my findings and in the road conditions. 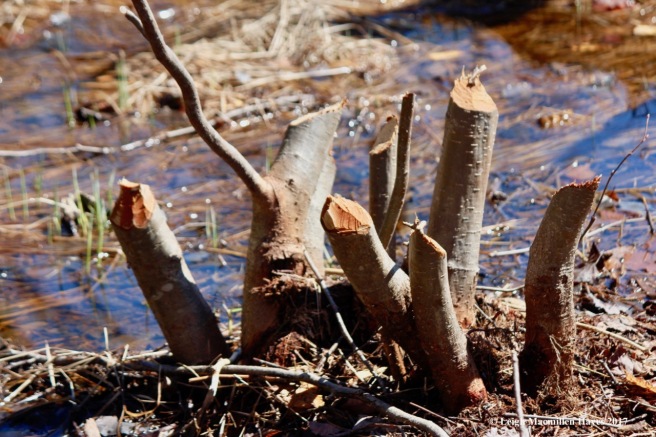 After following the initial trail and climbing over the stonewall, I was about to step onto the first boardwalk when I realized the beavers had been busy.

The water was high as I quietly moved along the board walk, but not too high. 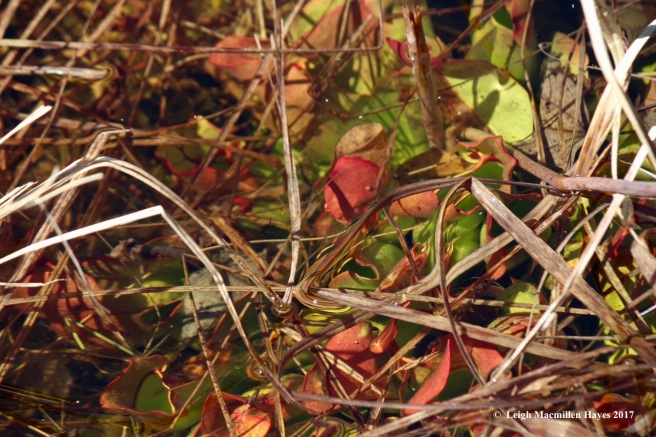 Although in some cases pitchers were submersed in the wet goodness.

The speckled alders didn’t mind for they love wet feet. 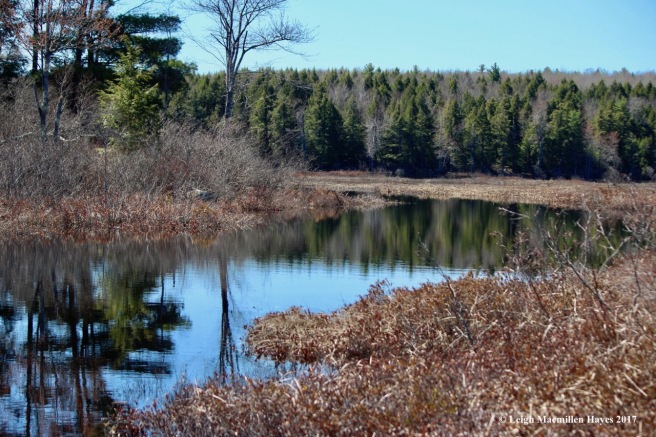 I stepped out to the Muddy River and listened to the chickadees sell cheeseburgers galore.

And then I turned in the opposite direction to admire the beaver lodge and winter feeding pile beside it. 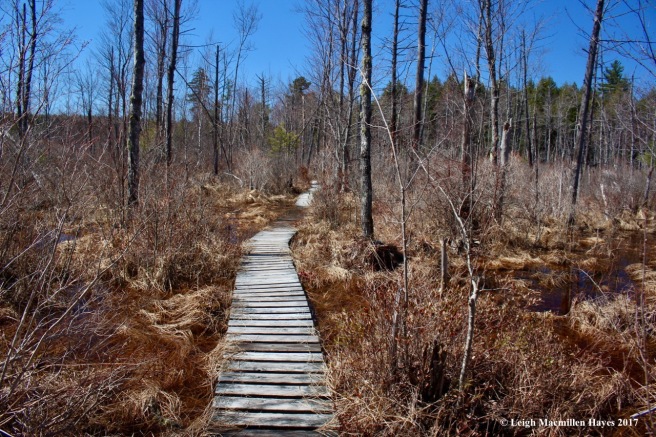 On the next boardwalk, the beauty of the red maple swamp surrounded me again.

Layers and colors spoke to the community and season.

And standing like sentries were the red maples for which it is named.

It was here that I found evidence of another visitor, albeit this past winter–moose scat.

And noted the swelling buds of highbush blueberries–their season in the offing.

After passing through the woodlands a couple of times in between the swamp journey, I at last reached the quaking bog and Holt Pond. 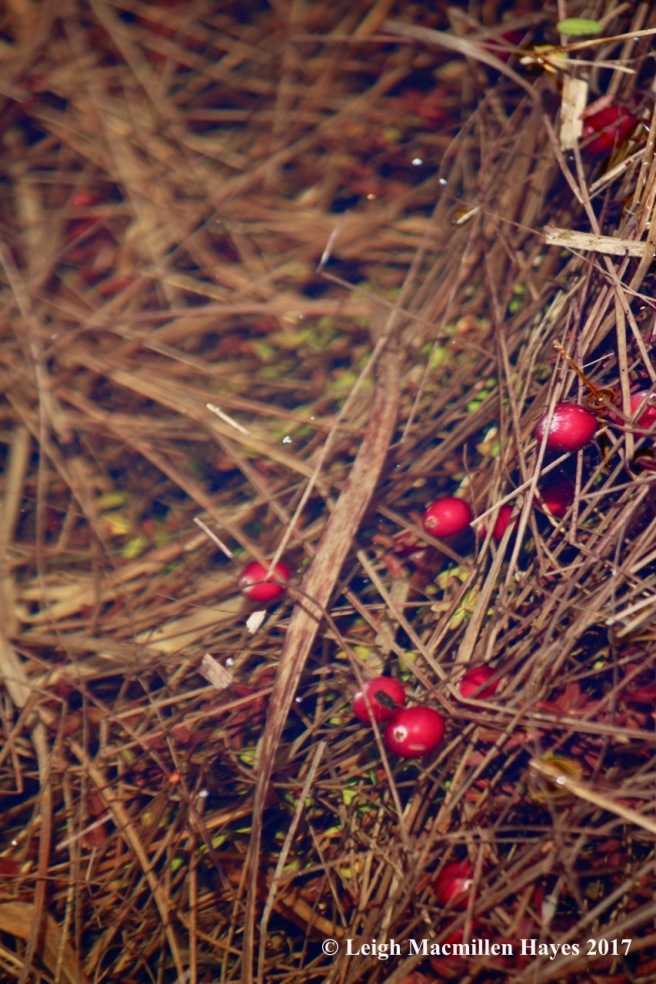 Beside the board walk, last autumn’s cranberries floated in the water.

And more pitcher plants showed off their hairy entrance ways.

Withered pitcher plant flowers dangled in their woody fashion–as beautiful in death as in full bloom.

By the time I reached the T on the boardwalk, I was standing atop it, but in six inches of water–thankful for my rain boots.

And thankful for the opportunity to stand there on a gorgeous spring day as I looked toward Five Fields Farm.

In that very view–two Canada geese. I wondered if they’d found a nest site.

Also in view, last year’s dragonfly exoskeleton that bobbed in the water flowing over the boardwalk.

On the way back, I stopped once again. My first photo call was an ostrich fern that I didn’t realize grew there. See why you should walk in rather than drive? That photo didn’t come out so well, but I was standing in an area filled with cinnamon ferns and suddenly realized I was looking at my first crosiers of the season.

I was actually down by a stream beside the road when I found these. A truck came along and the driver paused. He and his friend thought I was fishing and were going to ask what I’d caught. “Only photos,” I said playfully.

Upon returning home I decided to visit the frog pond one more time, thinking the lighting would be different. At the end of the cowpath I found a garter snake enjoying the warmth of the sun . . . and probably a few insects.

When I’d walked to the pond this morning, I was surprised at how quiet it was. That changed this afternoon as a chorus of wrucks added music to my day. And another egg mass had been added to the display.

Of course, all quieted down once I arrived, but I waited . . . and realized the pond really is full of life.

I’d spent the day beside my favorite ponds and was well rewarded. I’d also played with my camera settings, avoiding auto-focus all day. I’ve got a lot to learn, but hey, isn’t that what it’s all about?