The mosquitoes were thick. The ground damp. But the rain held off and so four docents and I met at the Greater Lovell Land Trust‘s Flat Hill parking lot at the end of Heald Pond Road. 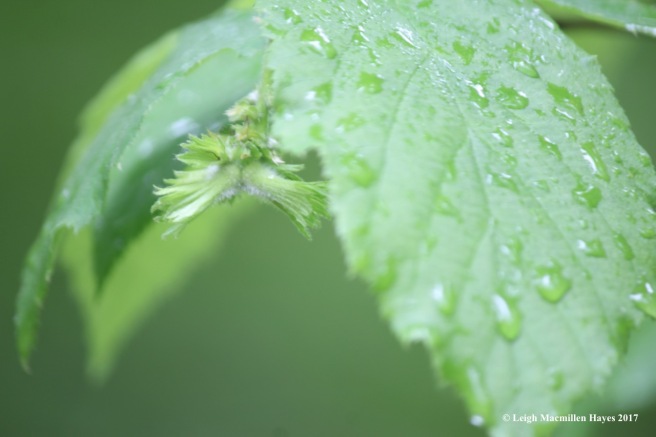 From the getgo, our fun began as we spotted numerous beaked hazelnuts forming–the trick is to pay attention to them and watch their continued growth, for in a flash, or so it seems, they’ll mature and . . . disappear. The nuts those hairy beaks cover are favorites for wildlife and we human folk also like them. 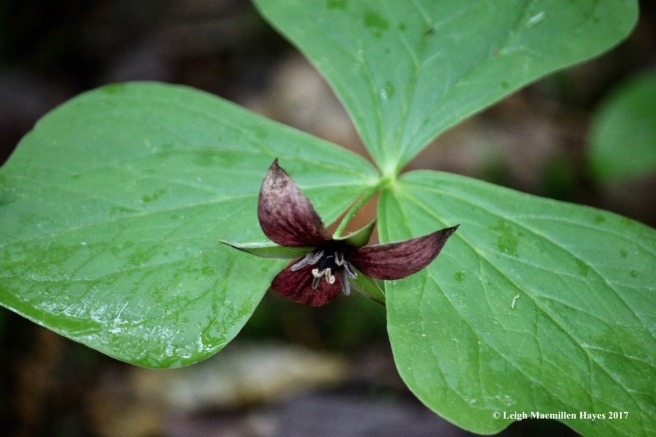 Our mission was to get reacquainted with the spring flowers–some being obvious to us like the red trillium, though the fact that it was still in bloom offered a delightful surprise. We chatted about the fact that its also known as Stinking Benjamin for its undelightful odor, but try as we might and we did again today, none of us have ever been offended by it. Apparently, they smell like rotting meat, but you can’t prove it by us. 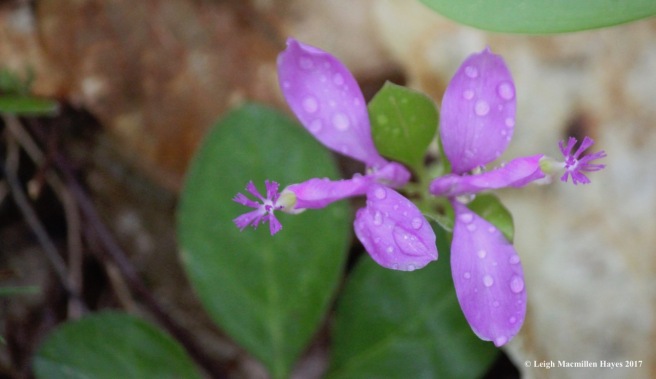 Here and there we were awed by the delicate fringed polygala, aka gaywings. They did remind us of birds with crazy head dresses taking off in flight. 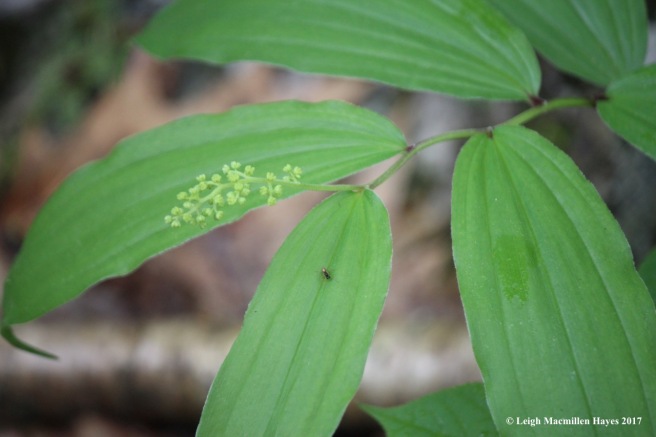 As we shared brains and practiced relearning species before the next season gives us even more, we felt proud to quickly ID a false solomon seal, aka wild spikenard, before it had fully flowered. It’s the cluster of flowers on the end branch, the arching, zigzag stem and long oblong leaves that stand out in our minds. 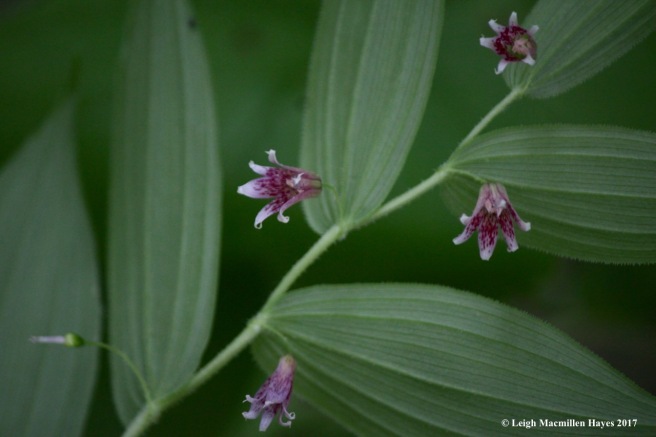 A seal of another sort, the rose twisted stalk, aka rosybells, also adorned the trail. Pam held the stalk up so we could look at the bell-shaped flowers that dangled below.  Notice how the leaves are green below and stalkless but don’t necessarily clasp the stem–as opposed to twisted stalk (white mandarin), which features greenish flowers dangling below and stalkless leaves that do clasp the stem. Plus the latter’s leaves have a white bloom on the underside. We didn’t see any twisted stalk, but were tickled with our rosybell finds. 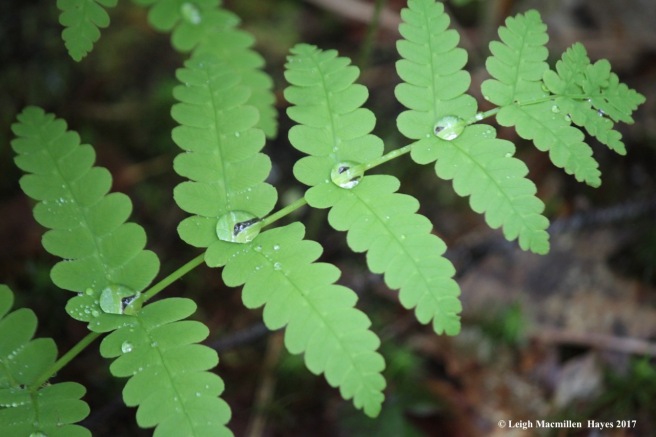 Periodically, we stopped to examine ferns, or quiz each other on the ID. But sometimes, it was just fun to notice presentations, including raindrops all in a row. 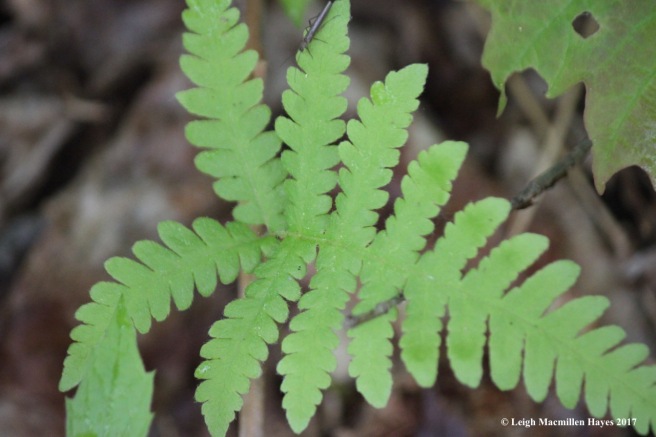 And though a couple of our fern experts couldn’t be with us, Joan was and she loves nothing more than squatting beside them with the Fern Finder to determine a species, including the long beech fern. 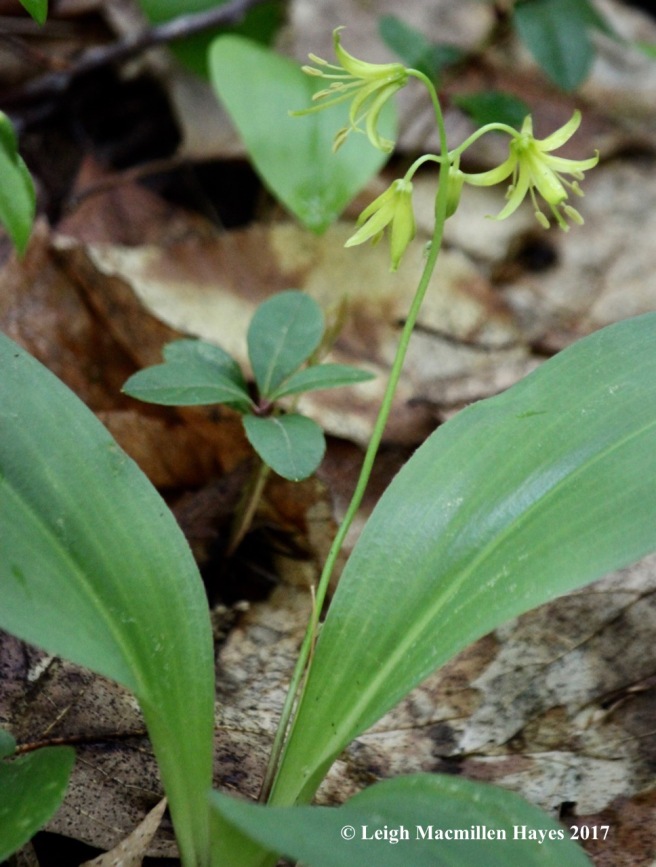 It was while looking at bracken ferns that Mary and Nancy spotted the greenish yellow flowers of clintonia. We were excited because we’d seen plenty of plants, but these were the first in flower, and they were well hidden. 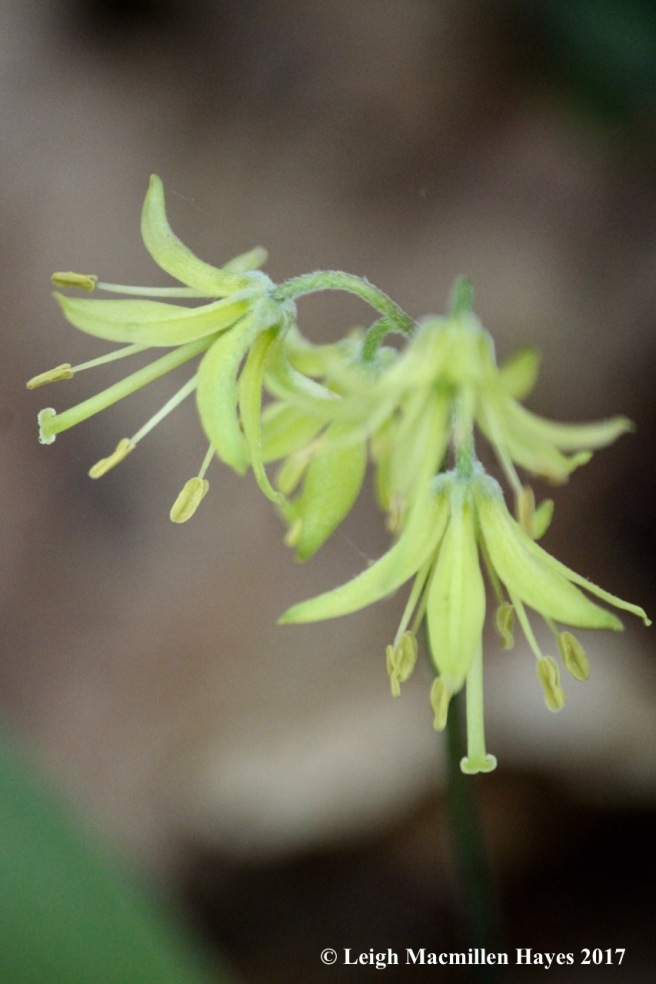 Yellow clintonia is also called bluebead for the fruit that develops is a porcelain blue bead-like berry. Check out those pistils (she’s a pistil) dangling below the stamen, their anthers coated in pollen. Bring on the bees and the beads. 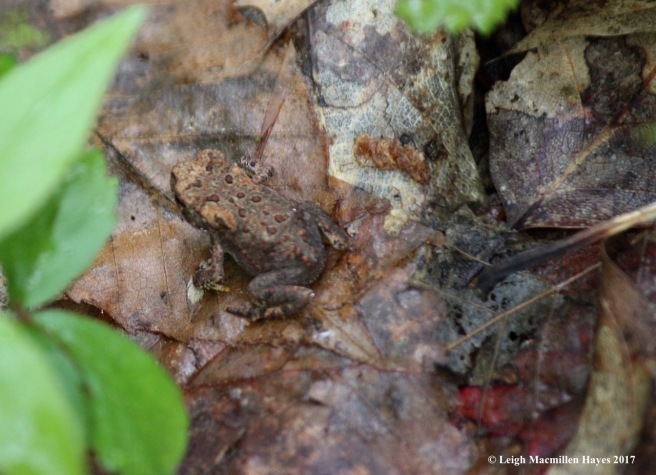 Suddenly, we discovered movement at our feet and saw our first baby toad of the season. It’s diminutive size and obvious camouflage made it difficult to see, but unlike the adult members of its family who will freeze in position, thus allowing us to study them further, this little one wanted to escape as quickly as possible. Smart move on its part. 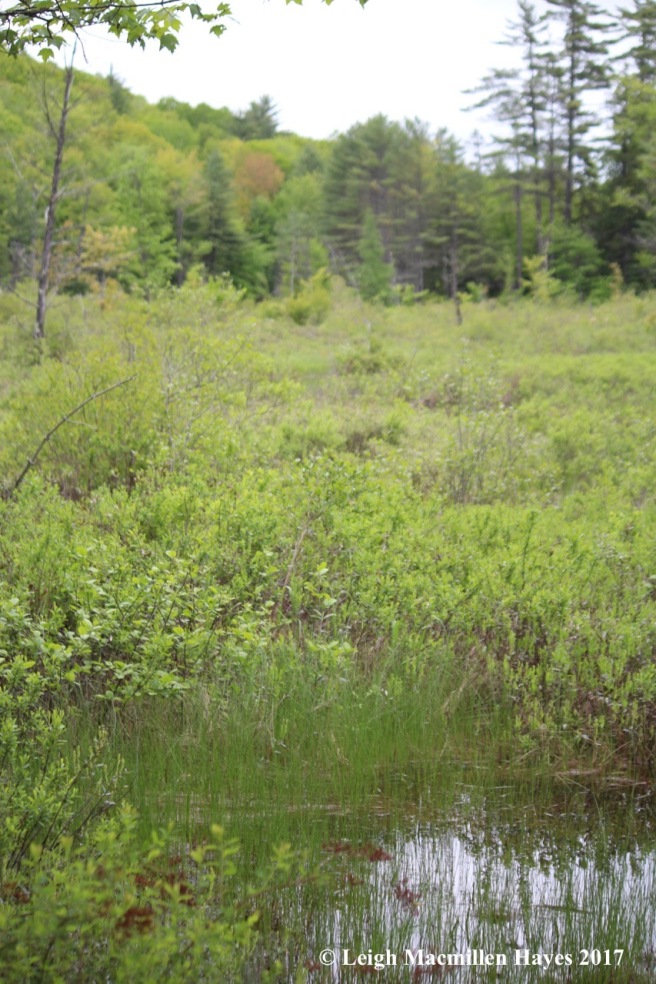 Only about two hours later we’d covered maybe a half mile and found our way to the bench that overlooks the swampy area surrounding the brook between the beaver pond and Bradley Pond. 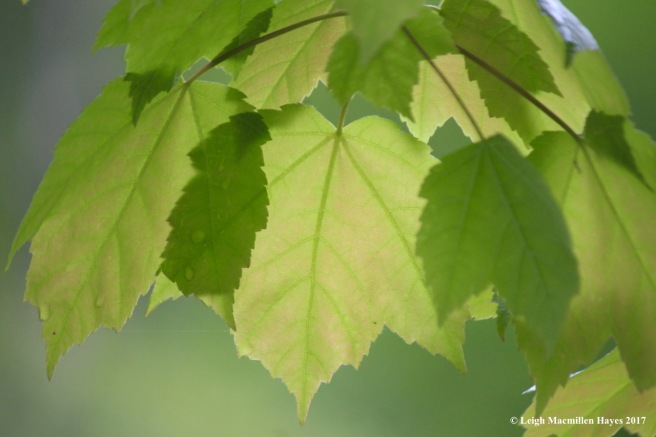 We sat below a red maple and listened to a chorus of birds–and gave thanks for the food supply. Let them eat bugs. We offered up a few mosquitoes. 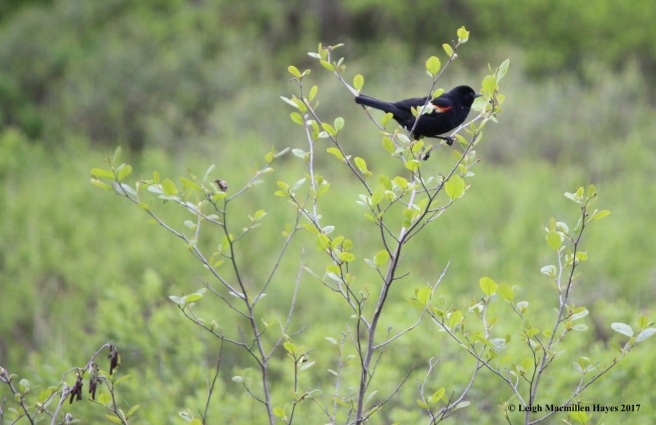 A red-winged blackbird flirted with us, showing off its bright red shoulder and yellow wing bar as it flew from shrub to shrub. The five of us swooned. 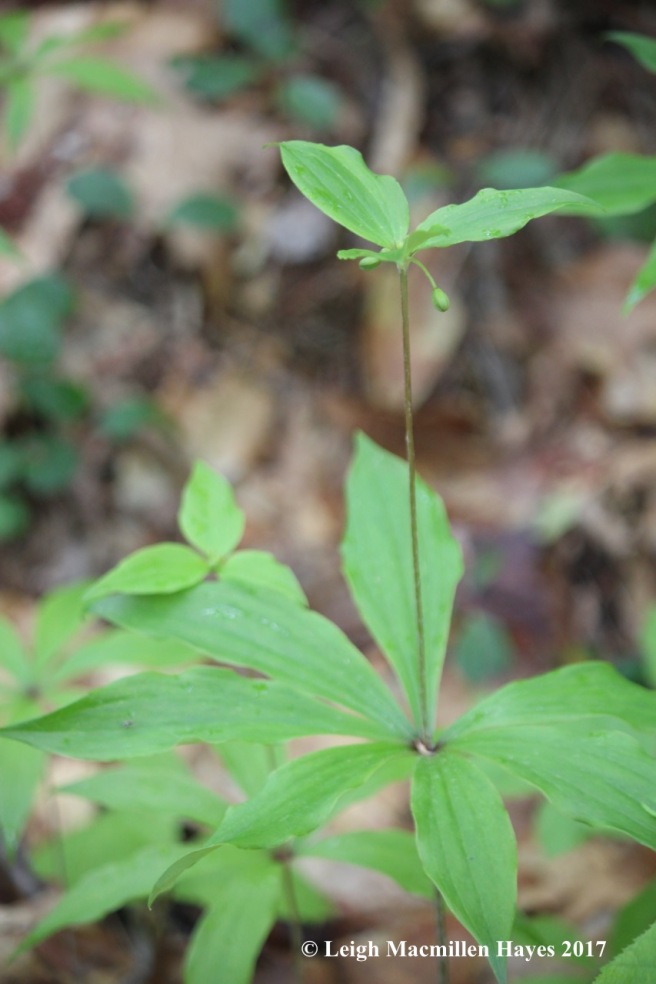 All along the path, we’d spotted Indian Cucumber Roots with their buds formed atop the second layer of their double-decker formation. When we finally stepped from the bench back to the trail, we noted a couple of the buds were beginning to dangle below the second story, meaning the blossoming season would soon be upon us. 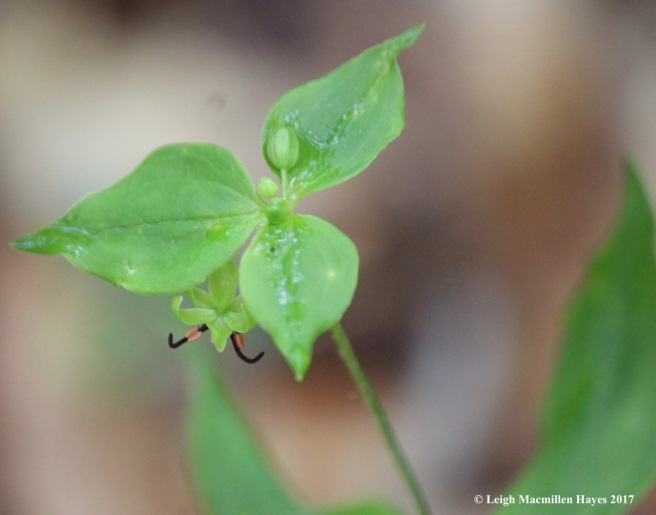 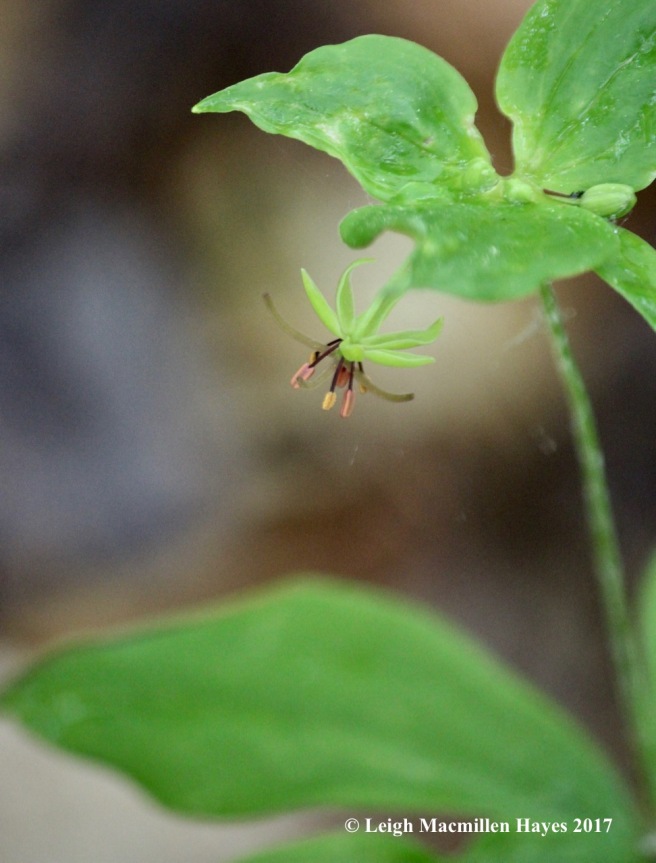 Voilà. I’m of the belief that if this flower doesn’t make you wonder, nothing will. 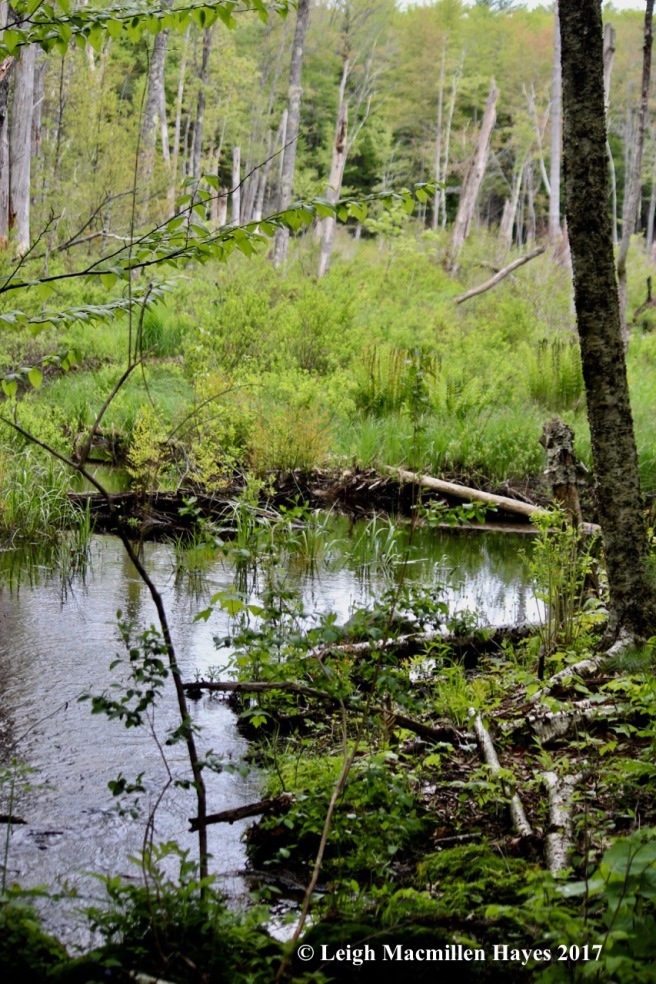 Our next stop was at the bridges that cross below the beaver pond. We’d been looking for fresh beaver works all the while, but only discovered the work that had been completed over a year ago.

There was still plenty to see, including the fertile crowns atop royal ferns, 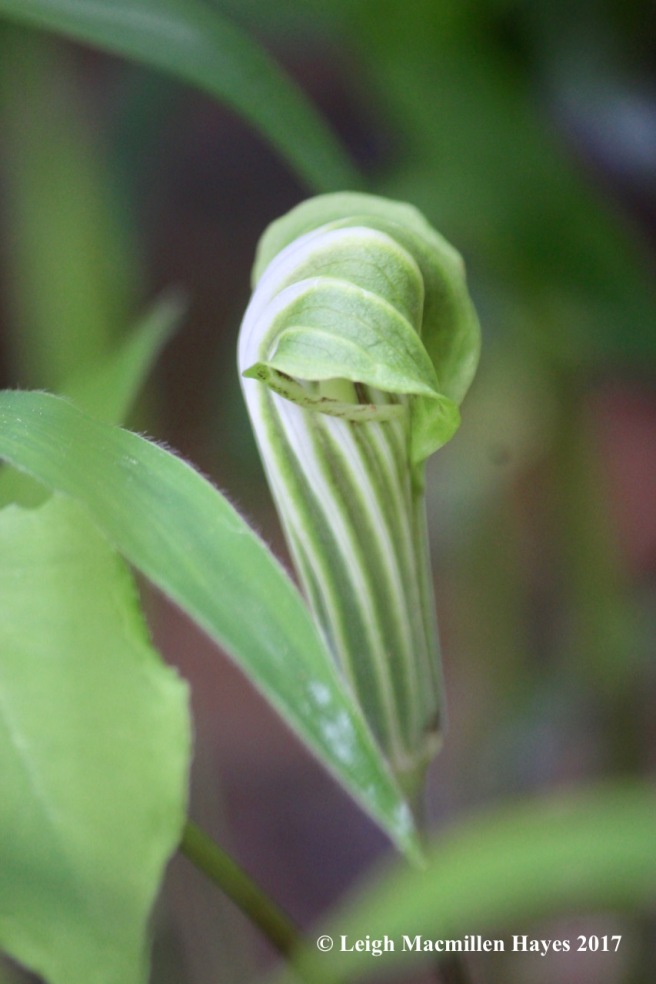 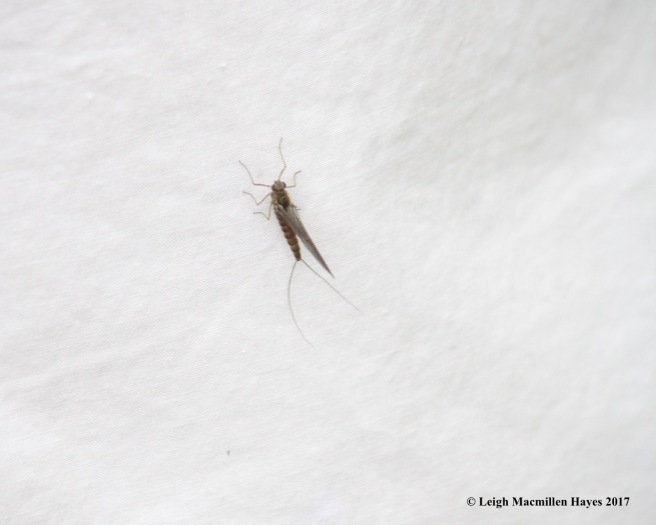 and a mayfly that chose Pam’s jacket to rest upon. 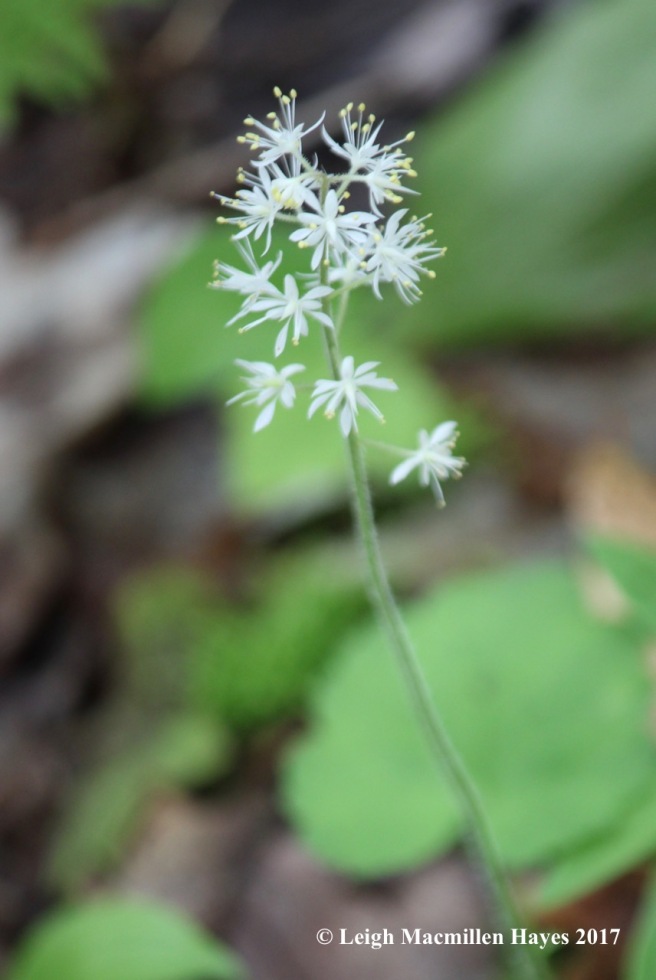 One of our many finds included foam-flower, with its cluster of star-shaped white flowers and conspicuous stamens. According to Mary Holland in her book, Naturally Curious Day by Day, “Its genus name, Tiarella, is the Greek word “tiara,” a word for a turban worn by ancient Persians which bears some resemblance to the shape of this flower’s pistil.” 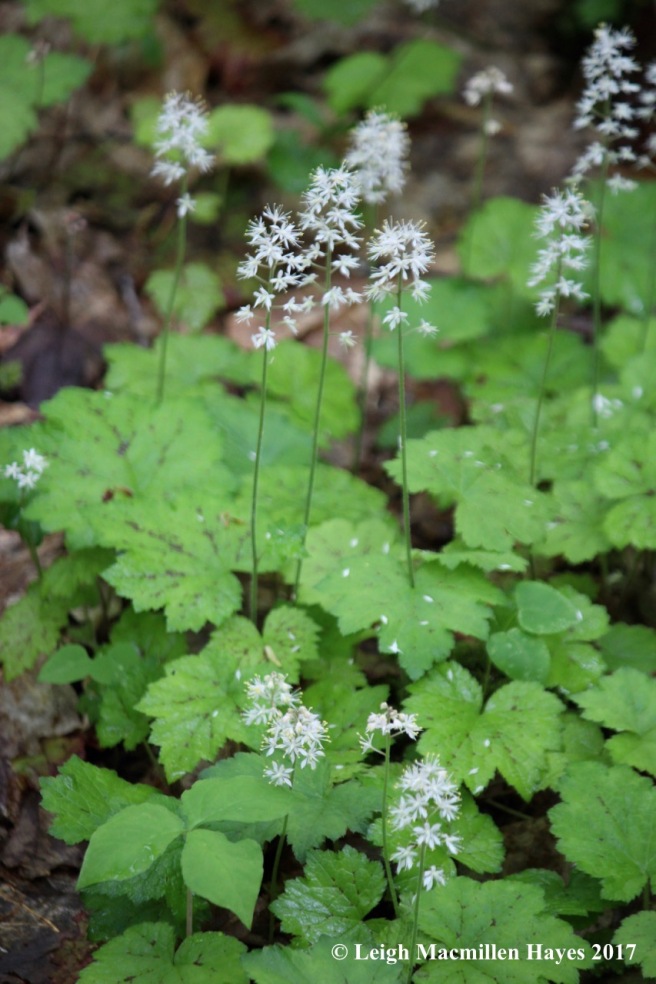 Tiara or not, we were quite taken with a carpet of it. 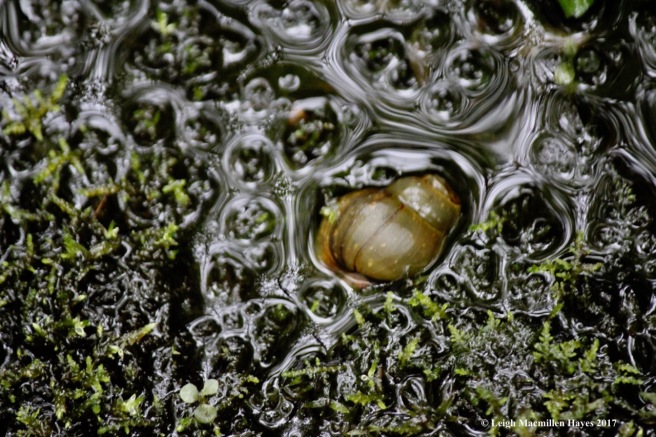 Those were only a few of the findings we saw as we moved at a snail’s pace during our three hour tour along Perky’s Path. Each time we visit, we say, “This is my favorite property.” That is . . . until we visit another one of the GLLT properties.